The mayor of Bogotá made this decision during the search and response activities carried out in La Calera. Photo via: bogota.gov.co

Given the most recent emergency events that have occurred in Bogotá, after a strong week of rains, which have greatly affected mobility, health, the physical integrity of its inhabitants and damage to public-private furniture, the mayor has made specific decisions to mitigate possible states of emergency.

Given this, López has declared a public calamity in Bogotá to attend to the winter emergency more quickly. According to delivered forecasts, the rains will increase in the following days and according to the Institute of Hydrology, Meteorology and Environmental Studies these precipitations will go until February 2023.

This measure was taken during the last report delivered by the mayor, in view of the state of emergency and the work that is being carried out at this time on the road that connects Bogotá with the neighboring municipality of La Calera. In addition, López highlighted that for the different activities, 180 people, 29 dump trucks, 4 backhoes, 4 bow ties, 11 mini loaders and 8 tree crews were made available to the affected community.

“We declare a public calamity due to a winter wave. That will allow us to have everything we need. Personally, tomorrow (Monday) at 6:30 am I will be at the area verifying all prevention and emergency care work at the PMU, and at 7:00 am all teams will resume their work. We are going to leave a basic team here tonight at the PMU in La Calera. We are working 24/7 in the attention with IDIGER, Firefighters and teams from the Road Maintenance Unit”, announced the mayor.

In the last hours, the administration enabled only one lane for the passage of machinery, for this reason, López asked the National Infrastructure Agency to order the La Calera toll concessionaire not to charge dump trucks, community vehicles and emergency teams “We are not here to do business in the middle of an emergency! We are preparing in La Calera not to go to Doña Juana, ”he added.

“We also had to dispose of a million pesos from the Idiger petty cash to pay tolls and to continue with the operations of the dump trucks,” the capital’s president stressed on this point.

The mayor of all Bogotanos stressed that tomorrow, Monday, November 14, The road to La Calera will continue to be closed and occasional cyclists will not be allowed to climb and for residents the road will be enabled to the San Luis sector. In the case of the enabled lane from Patios to La Calera, it will be used exclusively for emergency vehicles and machinery.

You may be interested in: District begins transfer of more than 35 cats of deceased caregiver in Chapinero

It should be remembered that in the last few hours, the mayor released a general report from the Unified Command Post, which she leads, to deal with the winter emergency in the vicinity of La Calera in a coordinated effort with the District Institute for Risk Management and Climate Change (IDIGER), the Official Fire Department, and the Secretaries of Government, Environment, Mobility, Health and Social Integration, as well as the Aqueduct, Road Maintenance Unit and personnel of the National Army, the National Police together with the Defense Civil, at kilometer six (via La Calera).

“A thousand thanks to the community of San Luis, La Capilla and La Calera, which together with the Official Fire Department of Bogotá and the District Institute for Risk Management and Climate Change – IDIGER They attend the emergency since yesterday. We have two priorities: attend to those affected and enable the passage through La Calera so that machinery can enter and we can remove the removed material”, highlighted the mayor Claudia López.

López indicated that the administration has managed to identify 25 affected points, 10 in Bogotá and 15 in the municipality of La Calera. Heavy rainfall leaves so far two people deceasedidentified as Ángela Patricia Peñarete, 29, and Alejandro Rodríguez, 33, and a missing person.

At least 43 families have been affectedto which the administration has carried out a census, they have been supplied with water and food and the community has been managed temporary shelter sites to serve and care for affected family groups.

“We agreed with the community to enable 3 shelters in community halls La Sureña, San Luis and San Isidro with emergency kits delivered. 6pm snacks and hot food will start arriving. At the moment, we have 43 affected homes, 3 dead and 1 missing,” added López. 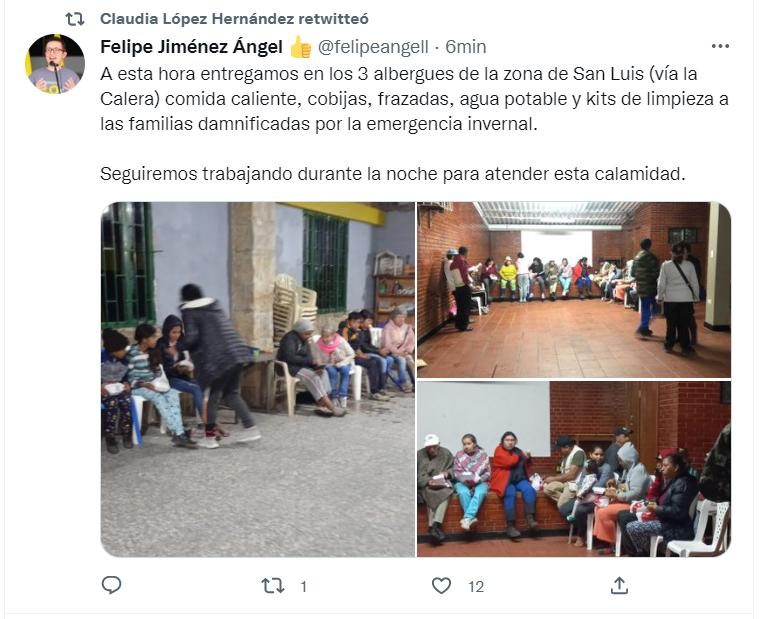 The three shelters are already enabled. The community is already being served. Photo via: @felipeangell

Emergency in La Calera: for more than 15 hours entities of the District and the Government provided assistance in the areas affected by the winter wave
Winter emergency: Two people died due to the overflow of three streams on the road to La Calera as a result of heavy rains
Winter emergency: authorities warn cyclists of the risk on the climb to La Calera, “it is not safe to travel the area for now”

Not all news on the site expresses the point of view of the site, but we transmit this news automatically and translate it through programmatic technology on the site and not from a human editor.
Sara Adm2022-11-14
201
Facebook Twitter LinkedIn Pinterest WhatsApp

Court overturns gun ban for some perpetrators of domestic violence