Kyrgios, ranked 40th, advances to his first major tournament final and becomes the first unranked male finalist at Wimbledon since compatriot Mark Philippoussis, who lost to Roger Federer in 2003; “I never thought I’d be here at all, to be brutally honest with you”

Nick Kyrgios said he felt “disappointed” not to face Rafael Nadal in the Wimbledon semi-finals after the Spaniard withdrew due to injury.

Kyrgios is the first Australian since 2003 to reach the men’s singles final at the All England Club, where he will meet Novak Djokovic or Cameron Norrie for the title on Sunday.

The 27-year-old received a surprise when Nadal withdrew from Friday’s second semi-final due to an abdominal injury he suffered in their epic five-set quarter-final victory against Taylor Fritz.

instagramDue to your consent preferences, you cannot view thisPrivacy options

Kyrgios responded to Nadal’s announcement, writing on Instagram: “Different players, different personalities. @rafaelnadal Hope your recovery is going well and we hope to see you all back in good health soon. See you next…” . 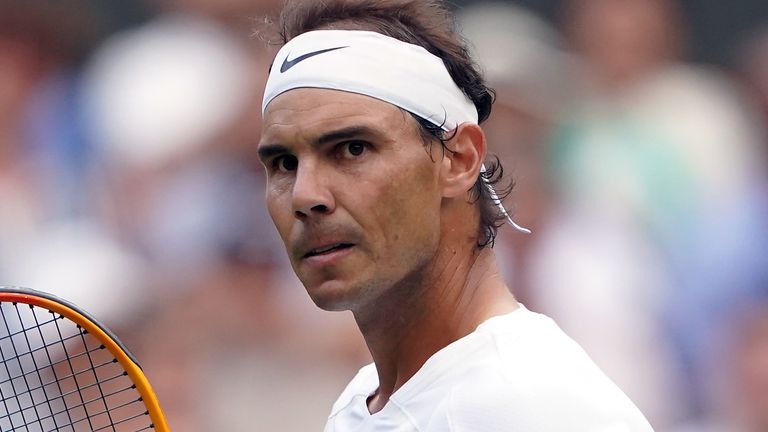 “We had a lot of clashes, a lot of battles. I’m sure at the end of the day everyone wanted to see us go to war there.”

Speaking at Friday’s press conference, he said: “Honestly, my first feeling was a bit disappointed. My energy was so focused on him and tactically how I’m going to come out and play, the emotions of walking there, everything. that kind of stuff.

“But, you know, it wouldn’t have been easy for him to do that. I’m sure a lot of his team members and himself, there would be a part of him that wanted to play, that’s for sure. “He’s barely lost a game this year. He probably wanted to go for all four. So it wouldn’t be easy.

“I thought I was just going to post a cool message to say, like, we’ve had a lot of fights, a lot of battles. I’m sure at the end of the day everyone wanted to see us go do the war there.

“I hope he gets better.”

Kyrgios said he would take “all the positives” out of his bye to Sunday’s final and rest his body after a “shocking” night’s sleep.

“Obviously at a Grand Slam you want to have those matches. I think in a way, exactly what you said, the competition jus, you want those to happen, the adrenaline. It’s just something I’m going to have to go to the final without that kind of semi-final experience,” Kyrgios said.

“But it’s okay. I’ll take all the positives. I can rest my body a bit. It’s not bad to go there feeling fresh.

“I had a shocking sleep last night, though, to be honest. I probably slept an hour with everything, like excitement. I had so much anxiety, I already felt so nervous, and I don’t usually feel nervous.

“I just know that there are a lot of people who want me to do well and give my best. But I had a shocking sleep last night. I hope I can get some sleep tonight (smile).”

instagramDue to your consent preferences, you cannot view thisPrivacy options

The pinnacle of tennis for Kyrgios

Unranked Kyrgios, who was a former junior No.1, will now play in his first Grand Slam singles final.

“I never thought I’d be here at all, to be brutally honest with you,” Kyrgios admitted. “Obviously when I was No. 1 junior in the world and playing here as a junior, I can’t give juniors enough credit, what that did for my confidence. Being around Grand Slams at that young age, being around some of the best players, the ease, I don’t think I would have had the men’s breakthrough so quickly, but I never thought I would play.

“I’ve seen some of the pros walking around and I’d be a junior here, and I never thought I’d be playing for the men’s title. I feel like it’s the pinnacle of tennis. Once you’re able to raise a Grand Slam trophy, it’s like, I mean, what else is there to accomplish?

“So I never thought I would be here. I’m just super proud and I’m just ready to go. I’m going to give it my all and we’ll see what happens.”

Join us for coverage of the All England Club with our daily live blog via skysports.com/tennis our Twitter account @skysportstennis & Sky Sports – on the go! Available for download now on – iPhone & iPad and Android

Not all news on the site expresses the point of view of the site, but we transmit this news automatically and translate it through programmatic technology on the site and not from a human editor.
Eleon2022-07-08
162
Facebook Twitter LinkedIn Pinterest WhatsApp

‘Lionel Messi is bigger than Barcelona’, says his brother Matias, who reveals the Paris Saint-Germain star ‘is not coming back’ and hits out at ‘ungrateful’ president Joan Laporta and Catalan ‘traitors’

Yassine Bounou finalist for goalkeeper of the year