PARIS (AP) — Strong winds and hot, dry weather frustrated French firefighters’ efforts Saturday to contain a massive wildfire that ripped through pine forests in the Bordeaux region for a fifth straight day, one of the many forest fires that have scorched Europe this week.

Among the worst blazes was Portugal, where the pilot of a firefighting plane died on Friday when his plane crashed during an operation in the northeast. It was the first fire death in Portugal this year, but the fires have injured more than 160 people this week and forced hundreds more to be evacuated.

The fire season has hit parts of Europe earlier than usual this year after an unusually dry and hot spring that parched the ground and which authorities blame on climate change.

As France’s worst blaze closed in on populated towns, some of the 11,000 evacuees in the area described fear and uncertainty about what they would find when they returned home. Footage shared by firefighters showed flames breaking through a mass of pine trees and black smoke spreading to the horizon.

A helicopter works to contain a forest fire during the second heat wave of the year near Casas de Miravete, Spain, July 16, 2022. Photo by Isabel Infantes/Reuters.

Firefighters focused their efforts on Saturday on using fire trucks to surround at-risk villages and save as many homes as possible, Charles Lafourcade, who oversees the French firefighting operation, told reporters.

Some 3,000 firefighters supported by water-dropping planes are battling blazes in southern France, the president said, and Greece has sent firefighting equipment to help.

French firefighters managed to contain one of the worst fires overnight near the popular tourist resort of Arcachon, the regional emergency service said on Saturday. But he said “difficult weather conditions” thwarted efforts to contain the region’s biggest blaze, which started in the town of Landiras, south of a valley of Bordeaux vineyards. Regional prosecutors suspect arson.

In Portugal, more than 1,000 firefighters worked on Saturday alongside ordinary citizens desperate to save their homes after a long week of battling multiple blazes across the country. The fires were fanned by extreme temperatures and earlier than usual drought conditions.

Portuguese public television RTP reported on Friday that the area burned this year – more than 30,000 hectares (74,000 acres) – has already exceeded the total for 2021. Most of it burned last week.

Across the border, Spain was struggling to contain several fires, including two that scorched around 7,400 hectares (18,200 acres).

In southern Andalusia, 3,000 people have been evacuated from villages threatened by a fire that broke out near the village of Mijas in the province of Malaga. Around 200 firefighters supported by 18 aircraft attempted to contain the blaze. Authorities were investigating his cause.

For a sixth day, firefighters were also trying to control a fire started by a lightning strike in the west-central region of Las Hurdes. Some 400 people from eight villages were evacuated on Friday as flames approached their homes and threatened to spread into nearby Monfrague National Park.

Croatia and Hungary also battled wildfires this week, as did California and Morocco. 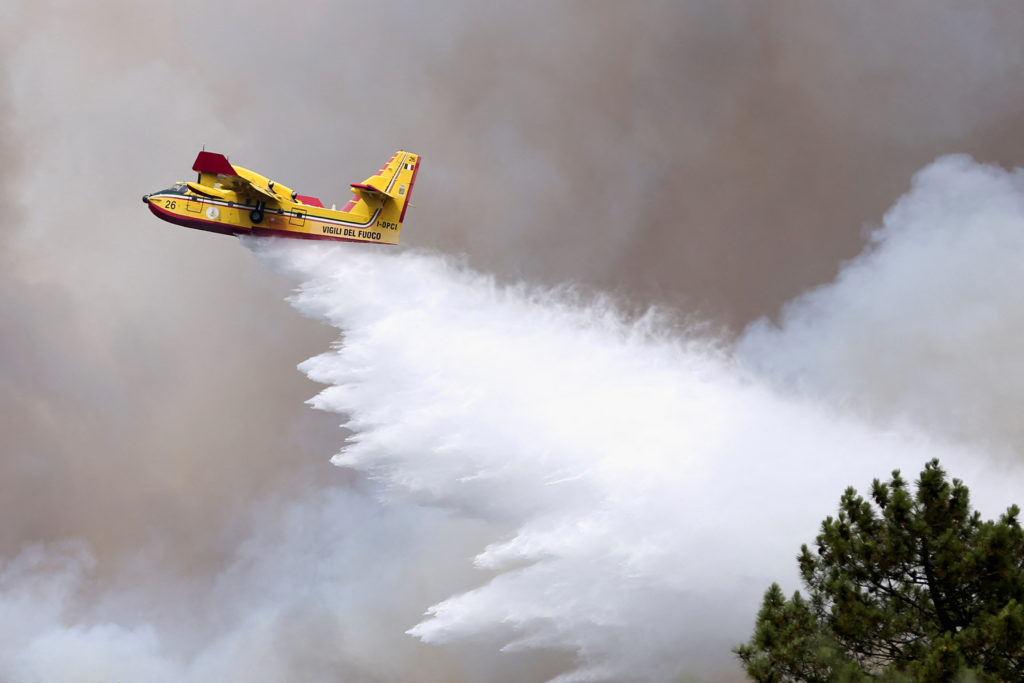 Britain’s Met Office meteorological agency has issued its first-ever ‘red warning’ for extreme heat for Monday and Tuesday, when temperatures in southern England could reach 40C (104F) for the first time.

The British government was holding an emergency response meeting on Saturday to prepare for the high temperatures. People in the UK have already been warned not to travel unless absolutely necessary and schools and care homes have been told to take extra precautions.

“All the heat waves studied so far in Europe are heating up,” said Robert Vautard of the Pierre-Simon Laplace Institute at the Sorbonne University. “Until greenhouse gas emissions are reduced to zero, heat waves will continue to intensify, become more frequent and last longer.”

In Turkey – the scene of devastating wildfires last summer – local media reported blazes in the western province of Izmir and in Hatay between the Mediterranean Sea and the Syrian border. Helicopters, planes and hundreds of firefighters fought the flames.

Last year, fires fueled by high winds and scorching temperatures tore through Turkey’s Mediterranean and Aegean regions, killing at least eight people and sparking heavy criticism of the government for its inadequate preparedness and response. .

Not all news on the site expresses the point of view of the site, but we transmit this news automatically and translate it through programmatic technology on the site and not from a human editor.
Eleon2022-07-16
162
Facebook Twitter LinkedIn Pinterest WhatsApp

Iran’s Protest Anthem won a Grammy. Here’s what you need to know