There are a lot of similarities between the current Penrith Panthers machine and the Parramatta Eels sides of their heyday in the 1980s.

The Panthers are not only capable of defending their title this year, they can become the first team since the Eels in 1981-83 to win three consecutive Premierships.

Parra at the time had a bumper crop of young talent including Peter Sterling and local juniors such as Brett Kenny, Steve Ella and Eric Grothe who were mentored by experienced natural leaders like Bob O’Reilly, Steve Edge, Ray Price and Mick Cronin. Jack Gibson in his fur coat, the guru every coach should follow.

It’s hard to see any weakness in this Penrith side and it’s all intentional.

Since 2017, they’ve brilliantly built a team around Nathan Cleary as their centerpiece at halfback and we’ve seen that every time an older player has moved on, he’s been immediately replaced by a “new and improved version”. Ivan Cleary and their football manager Matt Cameron deserve a ton of credit for the list they were able to put together.

It’s a tough crowd. They don’t just do all the one percent that we coaches rave about, but also the hard stuff like consistent line speed, winning the ruck and defending on the goal line.

I think they’ve just taken over from Melbourne over the past two seasons when it comes to being the benchmark for defense in the NRL. And their attack is also remarkable.

Five years ago you could see what they were trying to build. They brought in some tough old heads like James Tamou and then James Maloney to give their young crop a bit of a hard time.

And when those players were moved, they had a ready-made replacement that they groomed for the role. Tamou leaves and James Fisher-Harris becomes the spearhead of their pack.

Josh Mansour was a representative winger a few years ago, but they knew they had Brian To’o ready, so he was signed.

Same situation with Maloney, a smart five-eight with a winning mentality but Jarome Luai was waiting in the wings and the transition was smooth.

We see it again this year with Kurt Capewell cleared to go to the Broncos and Liam Martin more than capable of entering the starting team at No. 2.

Izack Tago and Taylan May rolled off the production line this year and they’re going to lose a few more players next year, but their succession planning is so precise that when Api Koroisau goes to the Tigers, they have Mitch Kenny as a first-year hooker on standby and with Viliame Kikau heading to Canterbury, they will have a number of young forwards to bolster their pack.

Going back is hard enough. A major factor helping Penrith is that they didn’t have to worry about the World Club Challenge.

When you have this on the calendar at the beginning of the year, it means you have to bring your preparations forward by four weeks.

I remember in 2002 when we were trying to defend our title with the Knights, we were strong for most of the season, we just missed out on minor premiership, but we faded in the playoffs playoffs.

And then the salary cap starts to bite. Within a few years we had lost Ben Kennedy to Manly and Timana Tahu to Parra because we needed to make room for young people.

Penrith tasted like they had a strong representation in their Origin days last year and they’re even better prepared now.

They will have both halves playing for NSW but they have Sean O’Sullivan to slot straight into the No.7 shirt after tasting in the first three rounds and Jaeman Salmon to replace Luai at five-eights. 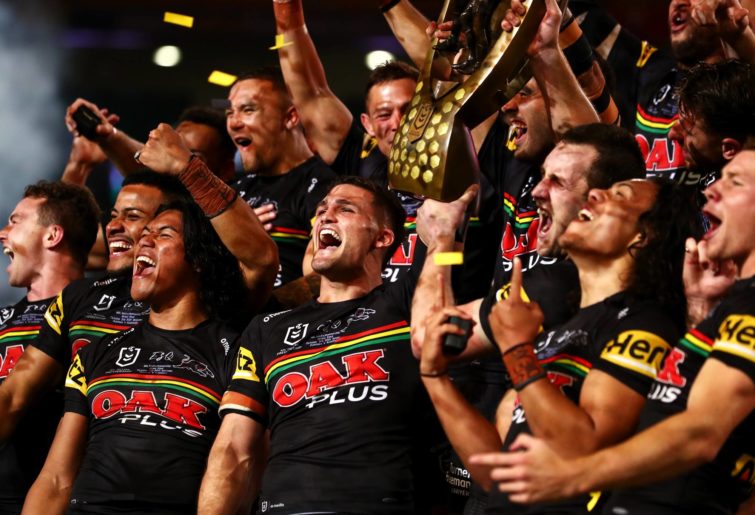 Scott Sorensen can take over from Isaah Yeo at the lock, they’ve got plenty of depth in the back for To’o and maybe Stephen Crichton too if he gets a run down the middle with Latrell Mitchell looking to miss Game 1 with his Torn Tendons.

And they will have Dylan Edwards as a constant presence at the back, racking up the yards, connecting when needed and organizing the team in defense.

They come into this game on Friday night against Brisbane with their toughest pitch in the NRL only to have an opposing side walk away with both competition points. Penrith have not lost there since Canberra beat them in July 2019. If they win this weekend it will be 20 straight games unbeaten. Awesome stuff.

And they still have To’o and Moses Leota to return to the team after some long-term injuries.

This year, they will have over six players from State of Origin, which will give their team huge confidence in the play-off race. And they will have a host of representatives involved in the World Cup campaign, including Cleary, Luai (Australia or Samoa) and Yeo, who will add another level of experience to their squad in 2023.

Not all news on the site expresses the point of view of the site, but we transmit this news automatically and translate it through programmatic technology on the site and not from a human editor.
William2022-04-15
Facebook Twitter LinkedIn Pinterest WhatsApp

Emotional Freeman given standing ovation, rings back in Atlanta

IPL 2022, RCB versus RR | All thanks to a certain Riyan Parag for the win, says Sanju Samson