The American day started with Pres. Biden announcing a coordinated release of strategic oil reserves. China, India, Japan, Korea and the UK all participated at least on paper (amounts were minimal). For the United States, they announced a release of 50 million barrels, or 32 million barrels, which will be traded in the coming months (release of oil that will eventually return to the SPR in the years to come. forthcoming), and 18 million barrels will be an acceleration in the next several months of an oil sale that Congress had previously authorized. Daily use is around 18 million barrels per day. 50M / 18M = less than 3 days supply. The share of other countries was also relatively small.

With oil aside, the market has focused on things like rates and the stock market. There was also economic data with the Markit PMI at 57.0 vs. 59.1 expected (demand slowed and prices remained high). The Richmond Fed index was better, however, with an estimate of 11 to 5.

In the US debt market, yields at the back of the yield curve ended the day higher with the 10 up 5.4 basis points and the 30 year up 5.7 basis points . Two-year yields did come off, however, as traders took profits after the yield peaked at a cycle high of 0.687% (highest yield since March 2020).

The higher yields helped push the NASDAQ index down. The index traded down more than 1% on the day and if it remained low it would be the first consecutive 1% drop for the index since March. It was not to be as good as the rally of the day took it towards its mid-range at -79.61 points or -0.50%. S&P and Dow industry averages closed higher. The S&P is at 1% of its all-time high. The NASDAQ index, which hit a new all-time high yesterday, is 3% off that level. European stocks were mixed today.

The table below shows the highs and lows and changes in price and percentage for major European American stock indexes today.

In the forex market, the CAD emerges as the strongest of the major currencies, helped by the rebound in crude oil. The JPY was the weakest of the majors. The USD ends the day completely mixed with an equal amount of gains over losses. The greenback rose slightly against the GBP, JOY, CHF and NZD and fell slightly against the CAD, EUR and AUD. The biggest gainer was the JPY at 0.23%. The biggest drop was against the CAD (-0.28%). 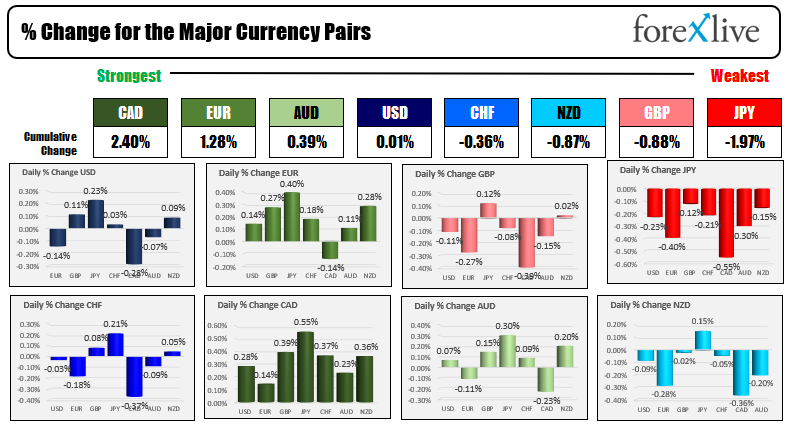 Photos: Is the port less crowded? Depends on who you ask