The East Turkestan government-in-exile, which represents the predominantly Uyghur population of the Chinese-occupied region, on Thursday condemned Harvard University for hosting a Chinese official who openly called China’s genocide of the Uyghur people a “lie”. .

Huang did not address the Uyghur genocide at the Harvard event – instead taking the opportunity to warn listeners about “narrow-minded” Americans who did not accept the Communist Party as a trusted partner – but did recently insisted in an interview that the Chinese concentration camps were “education centers” which were “a very good thing” and “very necessary”.

In fact, international legal experts have concluded that China is committing genocide against the Uyghur people and other Muslim ethnic groups in East Turkestan, “beyond reasonable doubt”. The wide range of evidence leading experts to this conclusion includes satellite images and eyewitness accounts of concentration camps, which at their height imprisoned up to 3 million people. Survivors say the camps are used to force Muslims to abandon their faith and worship communist dictator Xi Jinping, torture and rape them, forcibly sterilize women to reduce ethnic minority populations, and use the prison population as slaves.

“We condemn Harvard for hosting Huang Ping who openly supports the Chinese government’s ongoing genocidal campaign against the Uyghurs and other Turkic peoples of East Turkestan,” Prime Minister Salih Hudayar of the East Turkestan government-in-exile said Thursday. . “We demand that Harvard apologize and condemn the Uyghur genocide.”

Harvard did not apologize for the event at press time.

The Associated Press found that the Chinese government was running a birth control program aimed at Uyghurs, Kazakhs and other predominantly Muslim minorities in Xinjiang. (AP Photo/Ng Han Guan, File)

Huang spoke at what has become an annual tradition: the Harvard College China Forum. The event, according to its site, was organized this year in partnership with the Chinese government’s propaganda network CGTN and hosted its president and vice president as speakers. Another partner that helped with the event was the “Yabuli China Entrepreneurs Forum,” an organization that dubbed itself “Chinese Davos” and appears to have close ties to Chinese government entities.

Huang, the head of the New York consulate, used his speech to demand that Americans respect “socialism with Chinese characteristics” – the totalitarian ideology that Beijing uses to justify the Uyghur genocide – and insulted opponents “narrow d ‘spirit’ to communism.

“Ancient Chinese philosophy teaches us to be tolerant of diversity, just as the sea admits hundreds of rivers for its ability to contain,” Huang said at the event, according to a transcript released by China’s Foreign Ministry. . “American society has always embraced the spirit of diversity and inclusion, but there are also narrow-minded people who find it difficult to accept those countries with different histories, cultures and systems from the United States. “

“They always point fingers at these countries and want to change them,” Huang said.

Huang also claimed that nearly all Chinese supported communism, a statement at odds with the need for extreme censorship of dissenting political views, arrests of political dissidents, and growing evidence of civil unrest, especially in Shanghai. 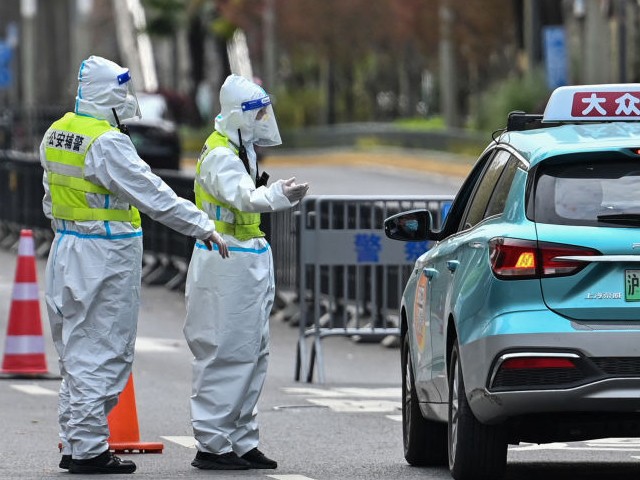 Police officers wearing protective gear control access to a tunnel heading for the Pudong district under lockdown as a measure against the Covid-19 coronavirus, in Shanghai on March 28, 2022. (Photo by HECTOR RETAMAL/AFP via Getty Images)

“The path of socialism with Chinese characteristics is rooted in the 5,000-year-old Chinese civilization. It is the choice of the 1.4 billion Chinese. China’s development and progress over the past decades have fully proven that this is the right path that suits China’s national conditions,” Huang said. “We will follow this path without hesitation. A survey conducted by Harvard Kennedy School on China for 10 consecutive years shows that Chinese people’s satisfaction with the government has remained above 90 percent year after year. We hope the US side will respect the path independently chosen by the Chinese people and welcome a peaceful and prosperous China.

Huang did not justify, or even mention, the Uyghur genocide at the Harvard event. Last year, however, he enthusiastically defended genocide as “good” and necessary.

In an interview with news outlet Sup China – which the interviewer said demanded that the Communist Party screen questions beforehand – Huang insisted that all of the extensive evidence proving that China was committing genocide and enslaving the Uyghurs in East Turkestan were a lie.

“There is no genocide, not a single piece of evidence to prove that there is genocide or something there. It’s just slander. As for the vocational and school training center [concentration camp]I think these centers are fixed by law,” Huang insisted.

“I see these centers as a campus rather than camps. We bring these people there to be educated. And it has been quite effective in terms of counter-terrorism and de-radicalization,” Huang explained.

The interviewer claimed in the interview that he also does not believe that the Uyghur genocide was genocide.

Not all news on the site expresses the point of view of the site, but we transmit this news automatically and translate it through programmatic technology on the site and not from a human editor.
William2022-04-22
Facebook Twitter LinkedIn Pinterest WhatsApp

How do I get out of my pandemic rut? Michelle Obama Speaks: NPR