Rescue team and firefighters work at the site where dozens of people were injured in a stampede during a Halloween festival in Seoul, South Korea, October 30, 2022. REUTERS/Kim Hong-ji

A little more than 24 hours after the tragic stampede during the celebrations of Halloween in Itaewon, a popular district of Seoul, South Koreathe authorities confirmed that two mexicans who were at the scene were injured.

This is how he communicated Bruno Figueroa, ambassador of Mexico in South Korea, on the night of this Sunday, October 30 through his social networks. “There were no Mexicans among the deceased and the embassy has had contact with two Mexican women with minor injuries,” the diplomat wrote on his Twitter account.

Likewise, he announced that so far the count of victims of the unfortunate event is 154 dead and 149 injured.

A little more than 24 hours after the Itaewon tragedy, the figures presented by the authorities are: 154 people dead, of which 26 foreigners, and 149 injured.

There were no Mexicans among the deceased, and the embassy has had contact with two Mexican women with minor injuries. pic.twitter.com/h8W4yoLfr1

One of the Mexican women affected during Saturday’s stampede was diagnosed with rhabdomyolysisa breakdown of muscle tissue that causes the release of a protein in the blood that can cause organ damage, as reported by Kelly Kasulis, a journalist for the Washington Post in the Asian country.

“A student from Mexico with whom I spoke she lost feeling in her legs while being crushed in Itaewon alley on Saturday night. He was diagnosed with rhabdomyolysis, a serious condition that involves muscle damage or even necrosis. One leg is still purple and swollen,” the reporter reported.

In response, the Mexican Embassy in South Korea reported that it had already contacted the young woman and her family. Later, it was revealed that she had already left the hospital and was in stable condition. 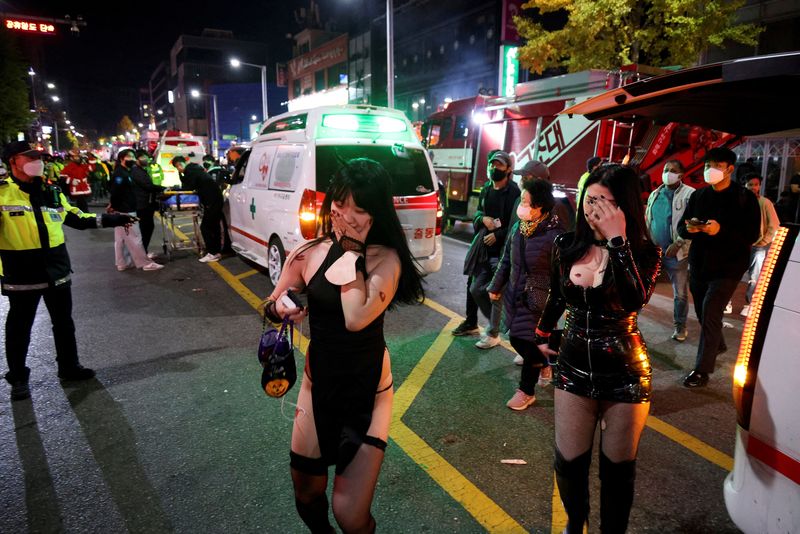 Partygoers walk past ambulances at the site where dozens of people were killed or injured in a stampede during a Halloween festival in Seoul, South Korea. October 30, 2022. (Photo: REUTERS/Kim Hong-ji)

According to the US media, Juliana Velandia Santaella (23 years old) and Caroline Cano (21 years old) are the Mexican women who were in Itaewon when the stampede occurred.

“[Juliana, estudiante de Medicina,] began to feel squeezed by the crowd, which slowly began to push hundreds of people down the hill in the alley that became the center of the accident, ”can be read in the publication of the Washington Post.

Not all news on the site expresses the point of view of the site, but we transmit this news automatically and translate it through programmatic technology on the site and not from a human editor.
Sara Adm2022-10-31
Facebook Twitter LinkedIn Pinterest WhatsApp