What is presented as “bipartisan” talk of immigration reform is actually the resurrection of the gang of eight through a gang of four, including Sens Republicans. Thom Tillis (R-NC) and John Cornyn (R-TX), who support amnesty for hundreds of thousands of illegal aliens.

The Gang of Eight crafted the Border Security, Economic Opportunity and Immigration Modernization Act of 2013, which expired after the House failed to pass the bill.

Now, Tillis and Cornyn are joining forces with Democratic Senators Alex Padilla (D-CA) and Dick Durbin (D-IL), the latter of whom is part of the original gang.

Instead of trying to craft a deal from scratch, the group will use smaller, previously introduced, bipartisan immigration-related bills to try to put together a package that could get the 60 votes needed. to go to the Senate.

the Hill also reported on Biden’s plan to drop Title 42 next month, which is the Centers for Disease Control and Prevention (CDC) statute to limit migration to the United States to protect citizens from exposure to the coronavirus:

The administration’s decision drew a fierce response from Republicans as well as some Democratic senators. But the administration is also facing pressure from a group of Democratic lawmakers and immigration advocates to stick with the decision, arguing that the Trump-era agenda is inhumane.

A GOP demand for a vote to effectively block the administration from lifting Title 42, which has also been stalled by a court battle, stalled a $10 billion coronavirus relief deal. Republicans see the two issues as related, as the administration’s decision to lift Title 42 comes as a broader coronavirus public health emergency is still in effect. 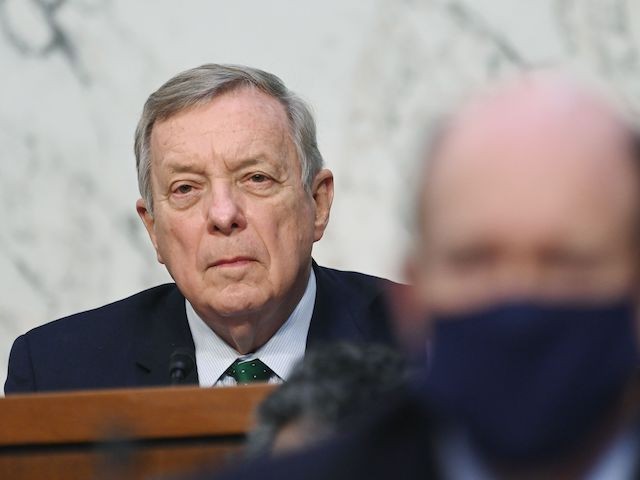 “We have a list,” Durbin said in the Hill report. “We have a starting list. There could be others. But it is a starting point. I spoke to four or five Republican senators today. There is a real interest in doing something.

Breitbart News reported that Biden officials are now preparing for a “mass migration event” at the border where they expect a foreign population the size of Atlanta, Georgia – around 500,000 – shows up every month in hopes of being released inside the United States by the administration’s extensive Catch and Release network.

Amid these warnings, Tillis and Durbin confirmed to the Hill that they are pushing to relaunch an amnesty plan for illegal aliens with their fellow senators, Breitbart News reported:

“Yes…we want to sit at a table and ask MPs who have bipartisan immigration bills, to come and propose these bills to us and see if we can build a margin of more than 60 votes for a group of bills. It may not be possible, but I think so,” said Durbin, when asked about holding meetings after the break. [Emphasis added]

Tillis, when asked by The Hill about the talks, added that after the break he wanted to “create working groups leading whenever we can have a [committee] to mark.” [Emphasis added]

“The only way to get real progress is to have a discussion on four pillars – so immigration reform, DACAborder security and then I think asylum reform is pretty important, especially with what’s happening with Title 42,” Tillis said. [Emphasis added]

Not all news on the site expresses the point of view of the site, but we transmit this news automatically and translate it through programmatic technology on the site and not from a human editor.
WilliamApril 29, 2022
Facebook Twitter LinkedIn Pinterest WhatsApp

WHO official sees ‘plausible endgame’ for COVID-19 pandemic in Europe

Novak Djokovic: I’d rather sacrifice trophies than be forced to get vaxxed