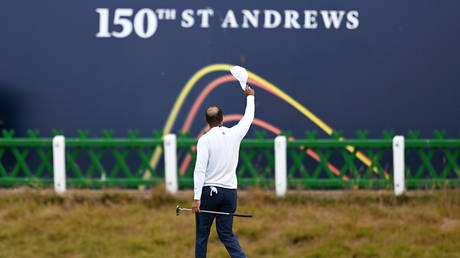 Golf icon Tiger Woods admitted the respect shown to him by friend (and occasional rival) Rory McIlroy on the 18th hole of what is likely to be his final St Andrews Open appearance was the reason for his tears on Friday.

Woods, 46, was visibly emotional as he failed to make the cut in the 150th iteration of the Open, finishing with a score of nine over par, and was reduced to tears as he down the fairway to complete his last hole.

Although he was a three-time winner of the event (and twice at St Andrews), it is well known that Woods’ best days are behind him – with his participation in even the major remarkable given the serious injuries he has suffered. he suffered in a serious car accident in February 2021.

Woods’ walk to the 18th green was also noted by Rory McIlroy. The Irishman, playing on an adjacent hole, tipped his cap at the American as he took what is likely his last step to the green as a professional on the world famous Scottish course.

And Woods later admitted that it was that show of respect that made him snap.

Thrilling scenes as Tiger Woods soaks up fan appreciation in the 18th 👏🥺 pic.twitter.com/guLLUGD1Im

“No, not then“Woods said when asked if the crowd’s reaction was the motivation behind his emotions.

“As I walked further along the fairway, I saw Rory right there. He tipped me.

“It was pretty cool, the nods I got from the guys as they walked out and I walked in, just the respect, that was pretty cool. And from the level of player fraternity, it’s good to see that and feel that.

“They all enjoyed what I did here during the years I played, I won two championships here, my success at the British Open and all my times that I enjoyed here in Scotland and playing, j felt like it just came to a head right there as I walked towards my golf ball.”

Yes, he did. Here is: pic.twitter.com/A8TQZGEbfM

The Open isn’t expected to return to St. Andrews until 2030, so it remains highly unlikely that Woods will ever have the chance to record a third victory on the course (and a fourth British Open title overall).

He added: “It was very moving for me. I have been coming here since 1995. I think the next [at St Andrews] could happen in 2030, I don’t know if I’ll be able to play physically by then.

“For me, it felt like it could have been my last British Open here at St Andrews. The fans, the ovation and the warmth, it was an incredible feeling.

“The collective warmth and understanding, they understand what golf is and what it takes to be an Open champion. I was lucky and blessed to win twice here.

“It was very emotional, just because I don’t know how my health will be. I feel like I could play future British Opens, but I don’t know if I can play long enough until he comes back here.”

Not all news on the site expresses the point of view of the site, but we transmit this news automatically and translate it through programmatic technology on the site and not from a human editor.
Eleon2022-07-16
157
Facebook Twitter LinkedIn Pinterest WhatsApp