“It was a very long day. We wanted to exhibit first with words and then with images. He knew that it was going to be difficult for the Tribunal, no matter how hard he tried, to identify each of the defendants. What we did with this was, neither more nor less, to facilitate the task”, explained the lawyer Fernando Burlando at the close of the first day of arguments in the trial for the crime of Fernando Báez Sosa.

The audiovisual material referred to by the legal representative of Silvino and Graciela Baez Sosa was exhibited this Wednesday in front of the judges of the Oral Court in Criminal No. 1 and, although it will not be added as evidence to the file, allowed to identify (from a pixel reconstruction) one by one, with first and last name, each of the eight defendants and his actions during the ferocious attack at dawn on January 18, 2020 in front of the Le Brique bowling alley in Villa Gesell.

“We understood that we had to reinforce this issue. So what did we do? We point to each of the aggressors to show the Court, for example: ‘This is Thomasen. See it in the video‘. Because if not, really, it’s very complicated,” said Burlando.

The videos exhibited, and that head this note, were a detail of some of those that were seen during the thirteen days of presentation of the evidence. What was done, according to what was stated by the team of lawyers of the individual victim, was a job for “clarify“ the projected images and, furthermore, indicate with a circle the action of each of the defendants. was also performed a follow-up, which is called motion trackingto determine exactly what was the action of each of them.

It may interest you: Tomás D’Alessandro, the faithful friend of Fernando Báez Sosa who witnessed almost the entire trial: his embrace of a key witness

The videos shown made it possible to identify one by one, with first and last name, each of the eight defendants during the attack

In it first video be seen maximum thomsen inside the bowling alley, when one of the patovicas wants to take it away. It is the moment after the crossroads that the rugby player had on the track with Fernando Báez Sosa and his friends, during the Neo Pistea show. There, as can be seen, Thomsen pointed at someone and then ran his index finger across his neck from left to right.

“Point to the place where Fernando was. It wasn’t random… It is a clear announcement of: ‘You are dead’so it was”, Burlando blurted out.

The second video corresponds to the one filmed by Lucas Pertossi and shows the start of the fight: the treasonous attack on Fernando Báez Sosa while talking with his friends.

In the very brief sequence, Ayrton Viollaz, Blas Cinalli, Ciro Pertossi, Enzo Comelli and Máximo Thomsen are identified. “Enzo Comelli attacks Fernando in unison with Ciro Pertossi. He (Comelli) arrives on the left flank and Pertossi on the right. The coordination to hit him at the same moment is amazing”, the lawyer had explained minutes before Facundo Amendola in his plea.

It may interest you: Trial of the rugby players: the reasons for the strong conflict with the defense experts for the autopsy of Báez Sosa 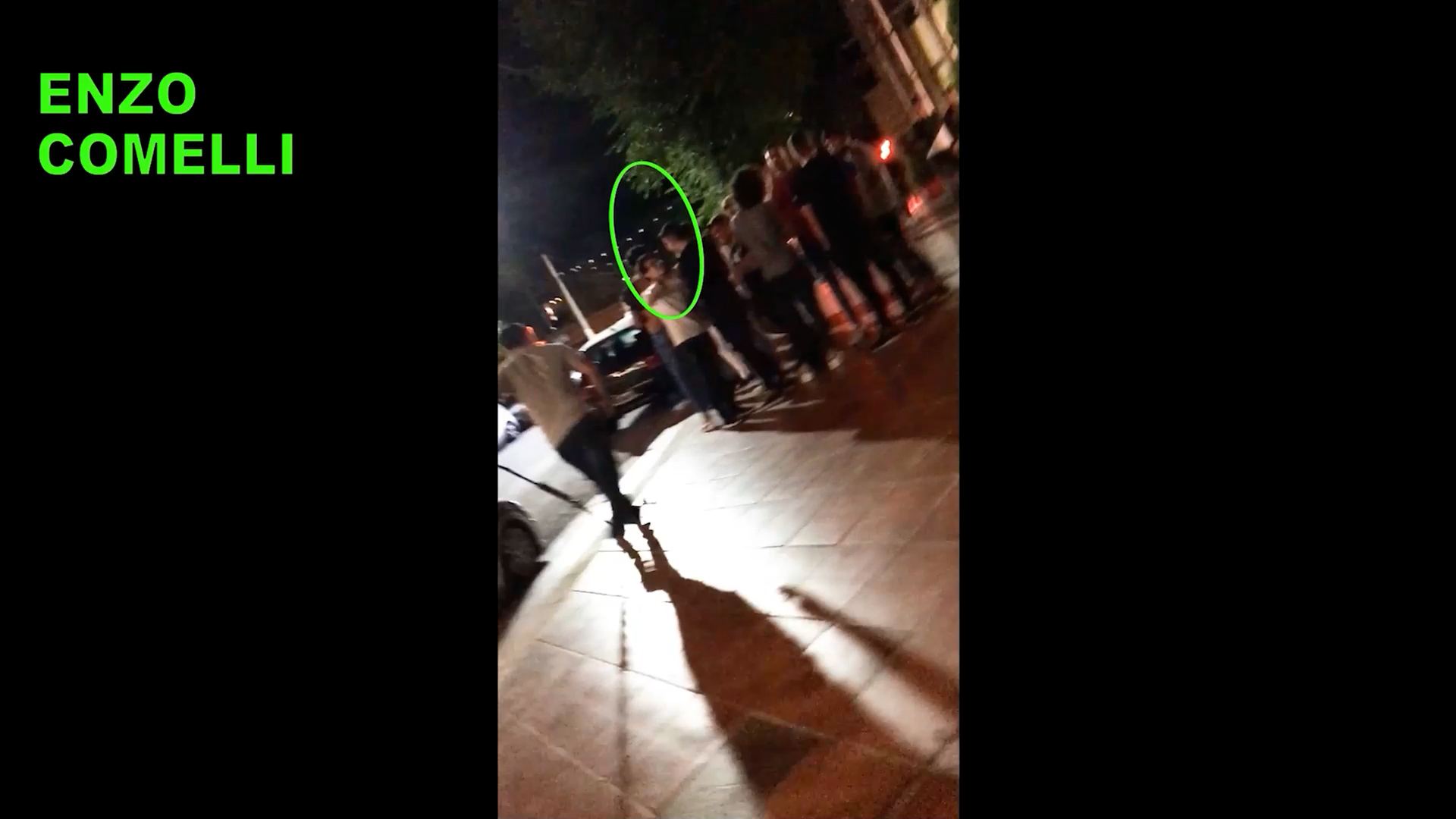 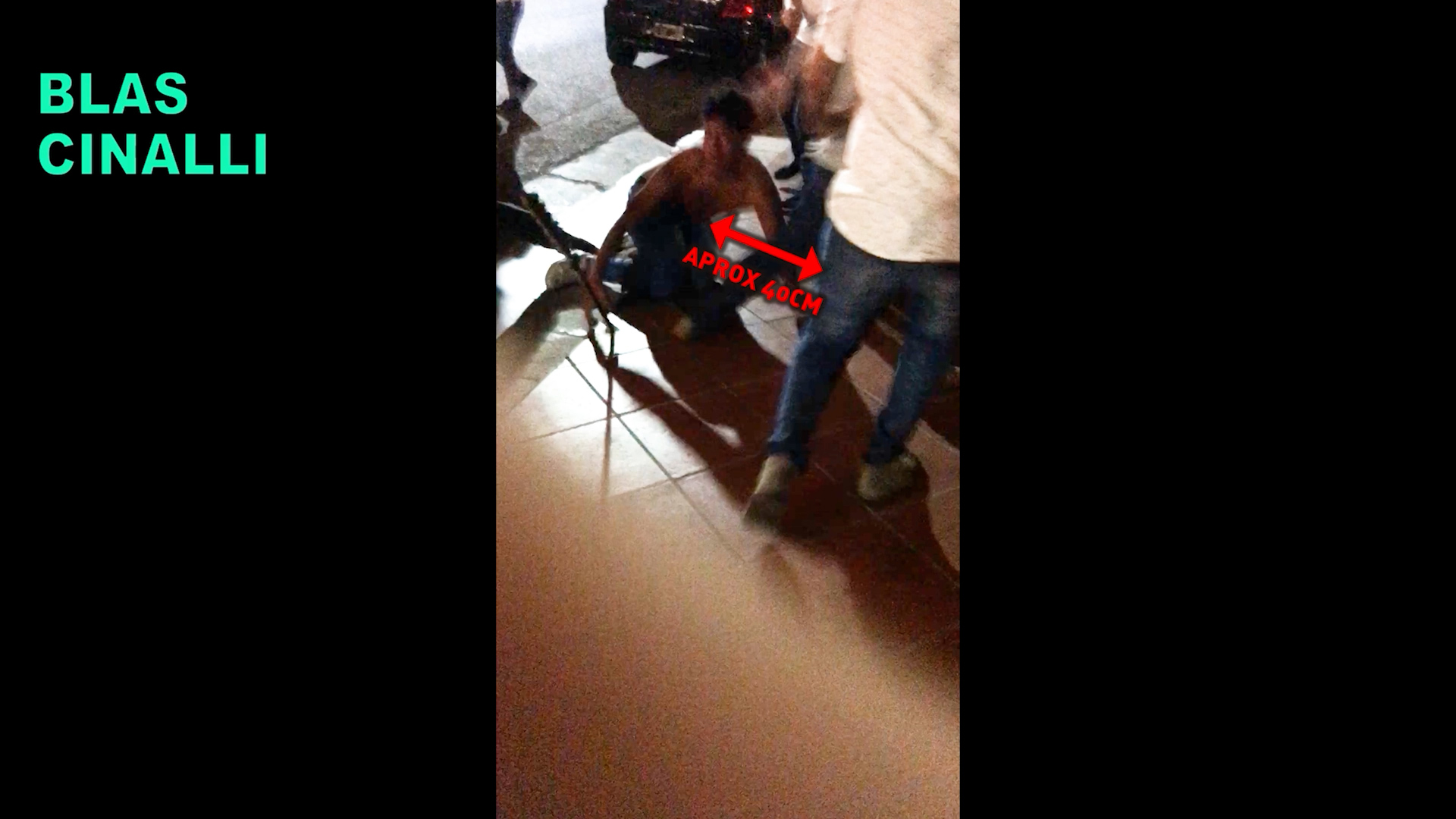 Fernando on the floor and without a shirt. He identified himself to Blas Cinalli next to him

The third filming It is the one that recorded the beating between the two cars and that is recorded from the sidewalk in front of Le Brique. There they identified seven of the eight defendants. The only one not seen is Ciro Pertossi, but he is later re-identified at the end of the attack.

In his detailed presentation, previously, Facundo Améndola referred to that video and explained what happened behind the car, where Fernando was savagely whipped. He also detailed what happened in front of the vehicle, where they hit his friend, Thomas D’Alessandroafter he tried to defend him.

“This boy is an example,” Burlando later said of D’Alessandro, who was a witness and witnessed 12 of the 14 hearings. At that moment, the young man’s mother broke down in uncontrollable tears, and her son hugged her.

Regarding what was observed in the third filming, Améndola Jr. had explained in his plea: “Máximo Thomsen kicks Fernando when his body is on the ground. Lucas Filardi, a friend of Fernando, detected that Thomsen kicked his friend in the chest and head and also stated that at one point “they were not kicks but stomps.” Those stomps are closely related to what was stated by the coroner Diego Duarte and with the shoe brand that was stamped on Fernando’s face.

It may interest you: The trial of rugbiers: Lucas Pertossi explained why he said “it expired” and Blas Cinalli pointed out that “it was a tragedy” 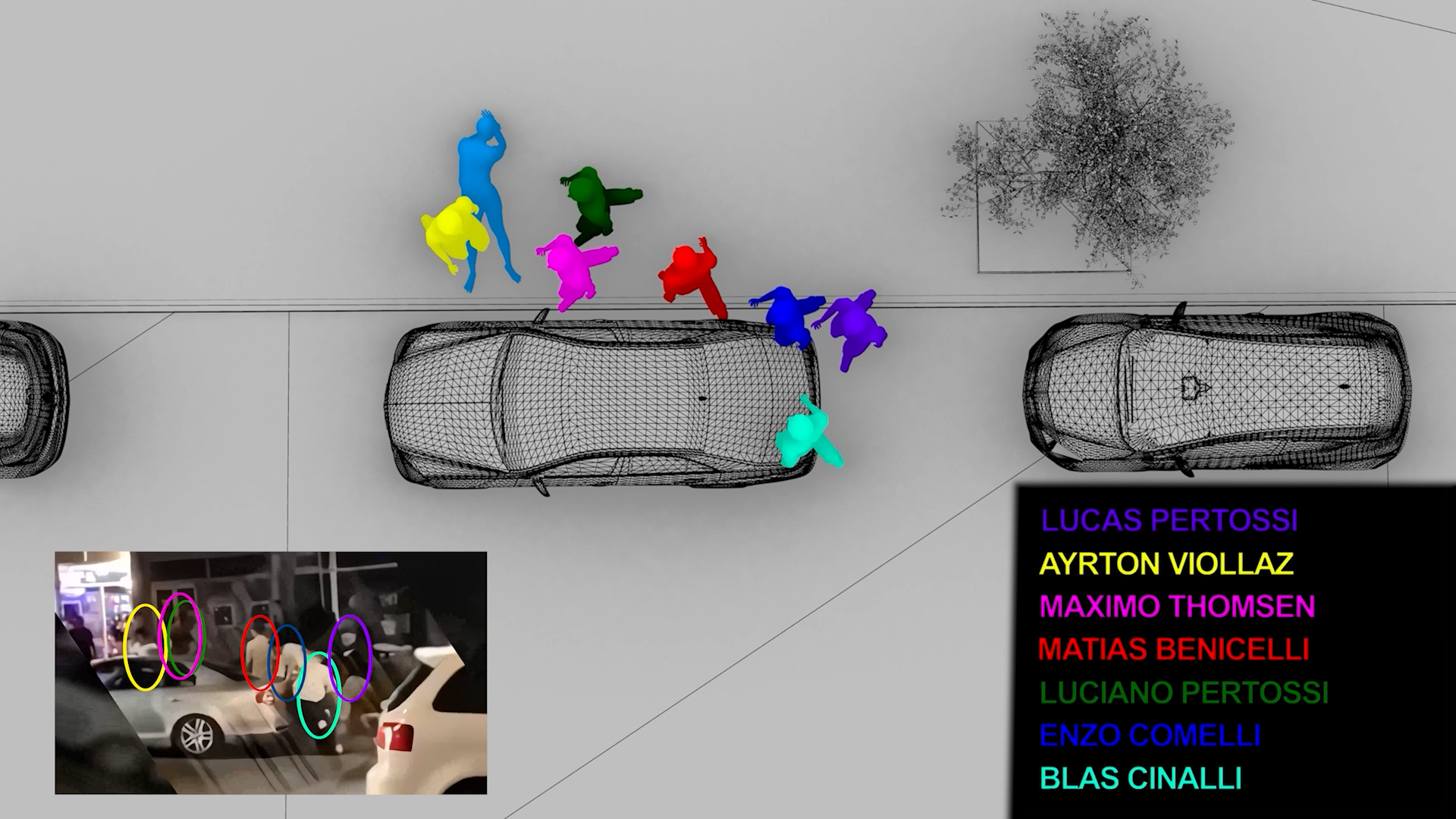 The third video identifies seven of the eight attackers. Each one is marked with a different color 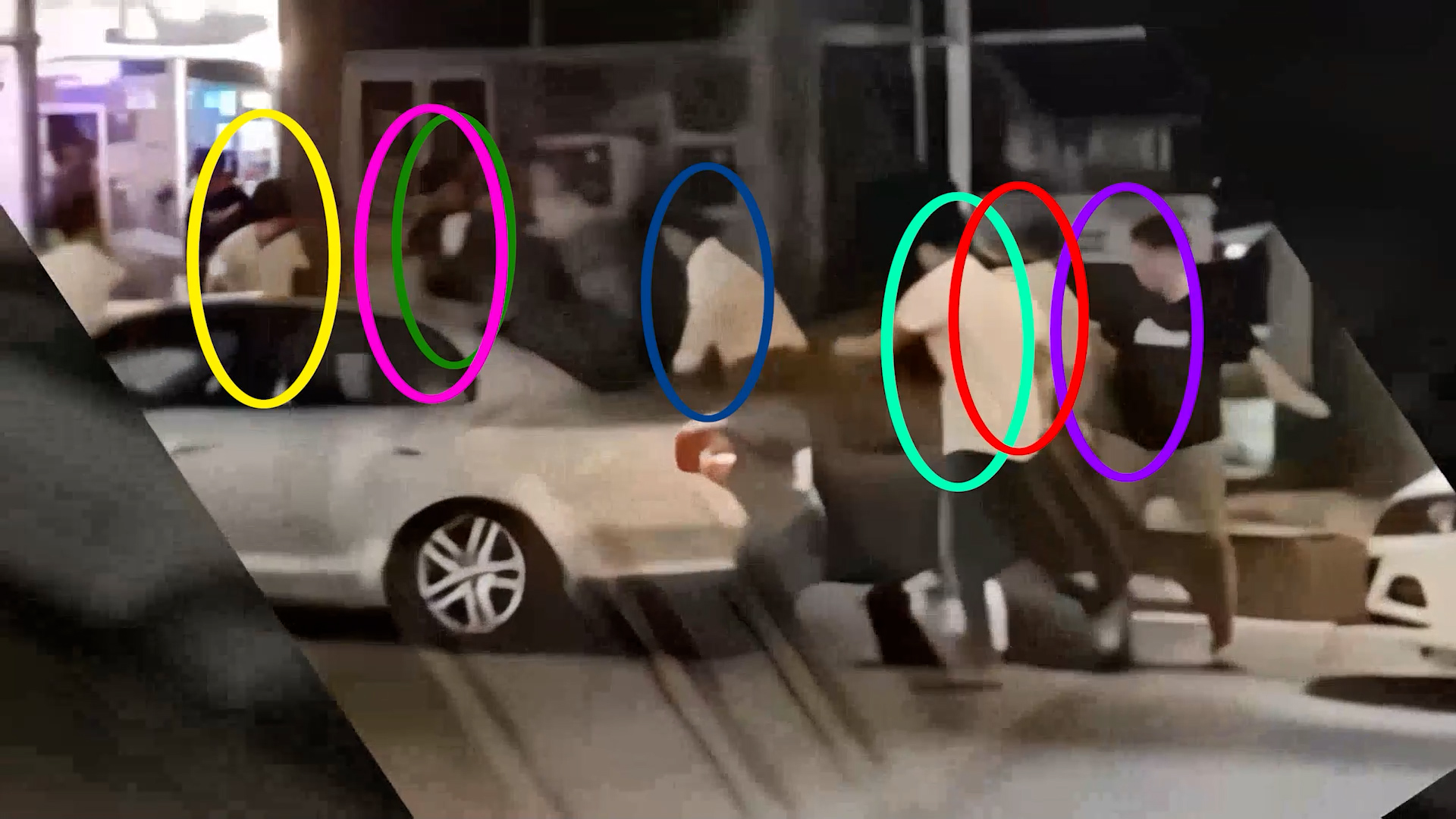 The only one not seen is Ciro Pertossi, but he is later re-identified at the end of the beating

In it fourth videothe one at the end of the attack recorded on the same path, but a few meters away, the assailants withdraw and Fernando’s body lying on the ground.

“There they are seen a few centimeters from Fernando Báez Sosa”, said Fernando Burlando in reference to Enzo Comelli, Máximo Thomsen, Ayrton Viollaz, Ciro Pertossi and Luciano Pertossi while the audio of the video was heard ‘Alto quilombo, they did it verg…‘”. 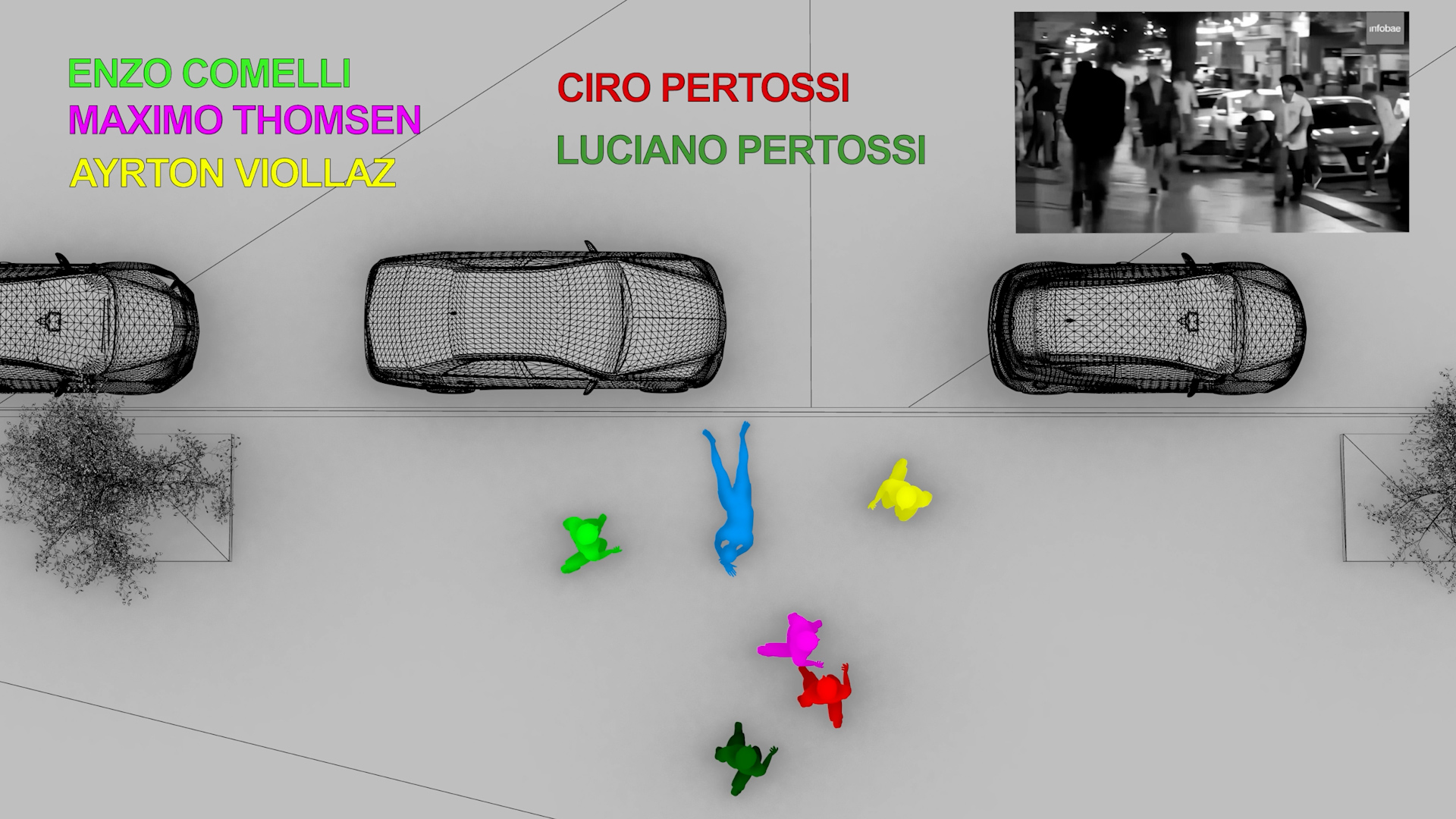 The video of the withdrawal of the aggressors from the place

At the end of his argument, Fernando Burlando spoke to the court about “the extent of the damage”. “You should have as aggravating all the attitudes of the defendants to avoid Justice, block research and erasing what is indelible for us; as well as the chats”, mentioned the lawyer.

And, in this context, he asked for the eight defendants, whom he named one by one, to be sentenced to life imprisonment as co-author of the “aggravated homicide by treachery and for the contest premeditated of two or more people to the detriment of Fernando Báez Sosa, in competition with injuries mild to life imprisonment.” His request coincided with that of Juan Manuel Davila Y gustavo garciarepresentatives of the Public Prosecutor’s Office.

After the allegations Hugo Tomei asked that the data be taken from the technical assistant of Fernando Burlando who helped him with the videos and, then, the president of Dolores’ TOC No. 1 decided to go to an intermediate room until this Thursday at 12, where the defense will make its presentation. “And Friday toolaunched as a joke the lawyer for the defendants.

Not all news on the site expresses the point of view of the site, but we transmit this news automatically and translate it through programmatic technology on the site and not from a human editor.
Sara Adm7 days ago
192
Facebook Twitter LinkedIn Pinterest WhatsApp

Galaxy S23: prices and characteristics of the new Samsung cell phones that can already be obtained in Argentina