The authorities reported fires of cars and commercial establishments in different points of Irapuato and Celaya, in Guanajuato. (Photo: Special)

The U.S. Embassy in Mexico issued this Thursday a travel alert its citizens to avoid visiting or traveling through the state of GuanajuatoGiven the recent acts of violence caused by the organized crime.

Through a statement, the embassy warned, especially US government employees, of the dangers they run when traveling through the municipalities of Celaya, Irapuato and Salamanca.

“Reconsider travel to the state of Guanajuato due to crime, following numerous confirmed acts of violence on August 9, including the arson of buildings and vehicles”

“Until further notice, United States Government employees have been restricted from traveling on Highway 45 from Irapuato to the cities of Silao and León in the state of Guanajuato,” it added. 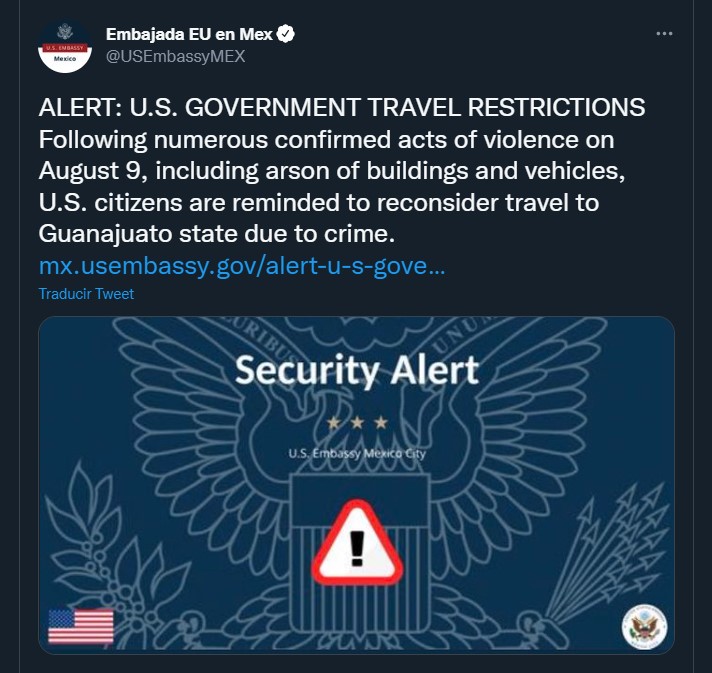 He also made a call to be attentive to the updates issued in the media and, In an emergency, call 911.

It is worth mentioning that last Tuesday, the United States Consulate issued a security alert for GuadalajaraJalisco, where blockades were also recorded.

On Tuesday night and early Wednesday, fires and acts of violence were recorded in 10 municipalities of Guanajuato, after elements of the Secretary of National Defense (Sedena) and state police participate in a meeting between two organized crime gangs, according to the president Andres Manuel Lopez Obrador.

According to the Guanajuato government, there are no reports of injured people as a result of drug blockades and fires to establishments. In this sense, personnel from the Fire Department began work to attend to the incidents.

Diego Sinhue, governor of the entity, informed that there are 11 detainees for their alleged involvement in the fires.

The detainees were presented this Thursday by the Undersecretary of Security and Citizen Protection of the Government of Mexico, Ricardo Mejía. 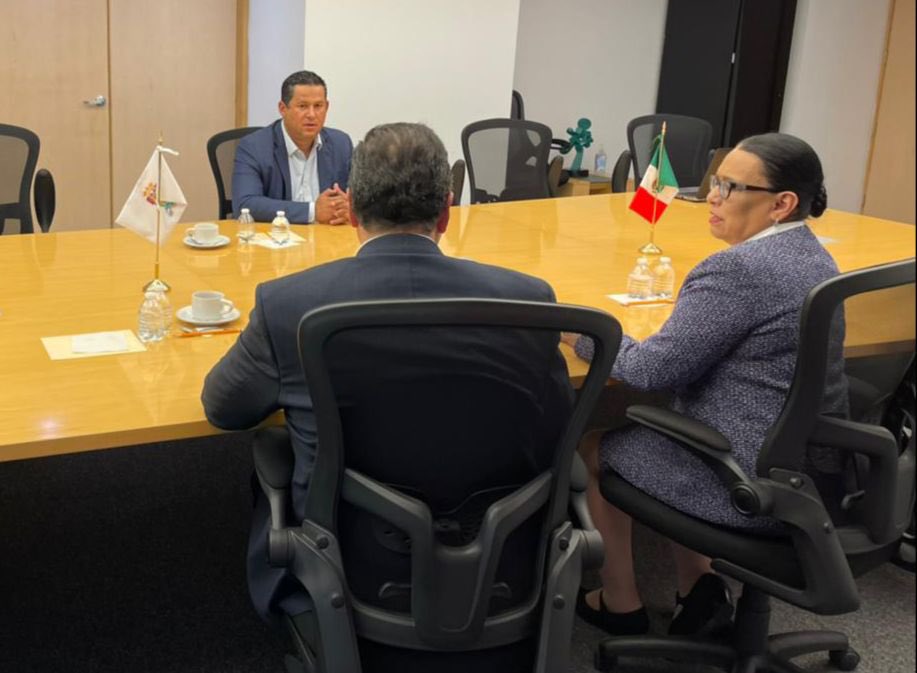 Governor Diego Sinhue in a meeting with the heads of the SSPC (Photo: Twitter/diegosinhue)

Also, the state of Querétaro raised the alert level to the maximumafter the drug attacks and the violent events that occurred on August 9.

The Secretary of Citizen Security, Iovan Elias Perez Hernandezreported that the authorities of the entity have renforced surveillancemainly at the different points that border Guanajuato, such as the free highway Querétaro-Celaya, at the height of the Los Angeles neighborhood; heNorthwest Ibrasion, at the height of the access to the community of Castillo, Obrajuelos and La Estancia; as well as the junction to the chighway to San Miguel de Allende and in the limits with San Jose Iturbide.

The official said that it is preserve the tranquility of Queretaro families.

“The tranquility and development of Guanajuato families is my priority, for this the effort and joint work of all is required, for this reason, I met with Sria. Rosa Icela Rodríguez and Subsrio. Ricardo Mejía from the SSPC, we agreed to reinforce the security strategy in GTO”, he wrote on his Twitter account.

Violent day in Ciudad Juárez: 4 dead and 8 injured due to a fight in Cereso, shootings and attacks on stores
They prosecuted 37 alleged CJNG hitmen who fell in the Michoacán drug camp
Why is “El Doble R” linked to the murder of “El Pirata de Culiacán” in Zapopan

Querétaro was thrashed 3-1 in his visit to Atlas

In photos: life in occupied Ukraine

‘I have no proof’: Everyone has a theory about the Supreme Court leak