The UN Human Rights Council approved the renewal for two years of the mission that investigates crimes against humanity in Venezuela. The project, promoted by 39 countries, indicated that “it is valuable to renew the mandate of the mission to contribute to accountability. It is a technical renewal of the mandate”, explained the nations that presented the resolution. It received 19 votes in favor, 5 against and 23 abstentions.

Of the Latin Americans who have a vote in the Council, Brazil and Paraguay supported the project; Argentina, Mexico and Honduras abstained; and Bolivia, Cuba and Venezuela did it against.

In the debate prior to the vote there was a moment of tension in the living room. “It is important to have a balanced and measured report. In the reports, the mission documented human rights abuses, inhuman and degrading treatment,” said the US ambassador. Her peer from Venezuela violently interrupted her and asked that her country be “respected”. Then the North American was allowed to continue her presentation, in which she ratified the work of the independent mission.

Meanwhile, the delegation of Paraguay highlighted the reports of the mission and former High Commissioner Michelle Bachelet. “We recognize progress and dialogue processes in Venezuela, but this is a proposal that puts the victims at the center. (…) Venezuela, as a member of this council, must fully cooperate with all mechanisms, as well as implement the UN recommendations”, he expressed. 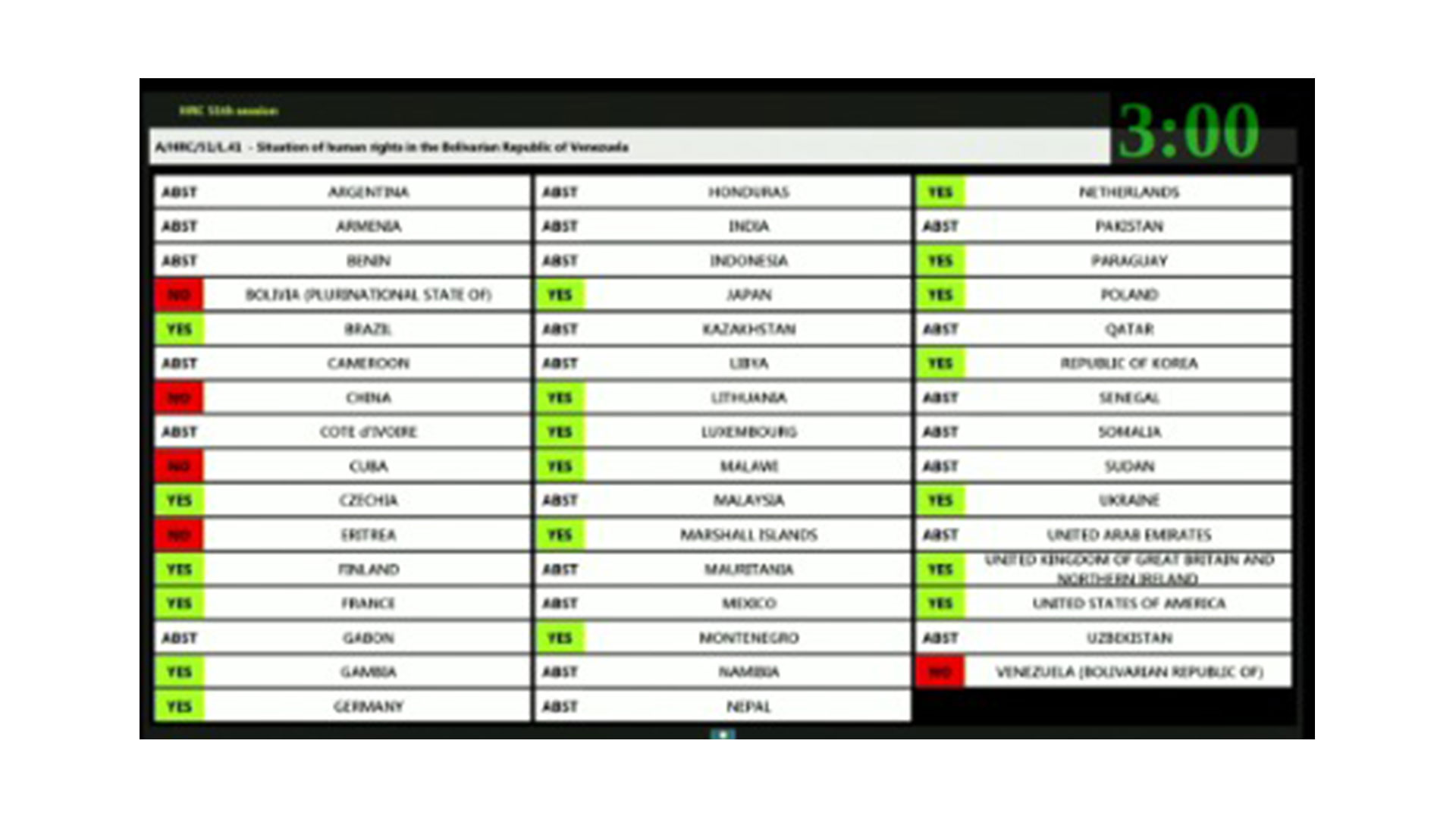 Then the ambassador of the Maduro regime exposed. He rejected draft resolution L.41, defined it as “hostile” and criticized the media, which “have been waiting for approval for weeks.” “It is played again with the imposition and not with the negotiation”, he accused.

For his part, the ambassador of Argentina said that the country is concerned about the human rights situation in Venezuela; While the delegation of Cuba He took the floor again to explain his vote: “This is not a regional initiative,” he said.

Resolution L.41 presented with the support of 39 countries condemned the serious human rights violations in Venezuela and called for the renewal for two more years of the mandate of the UN Independent Mission that investigates crimes against humanity committed by the Nicolás regime. Ripe.

The nations indicated that they welcome with “satisfaction with the reports of the United Nations High Commissioner for Human Rights and the International Independent Fact-Finding Mission on the Bolivarian Republic of Venezuela” and expressed “its concern about the continuing and serious violations and abuses of human rights in Venezuela”.

Among those serious violations, they listed the “disproportionate impact on the rights of women, children, indigenous peoples, older persons and persons with disabilities”, and that “more than 6.8 million people have been forced to leave the country” due to the deep crisis.

They then underlined the conviction that only a peaceful and democratic path is the solution to the current crisis in Venezuela and that said solution “is in the hands of the Venezuelan people”. 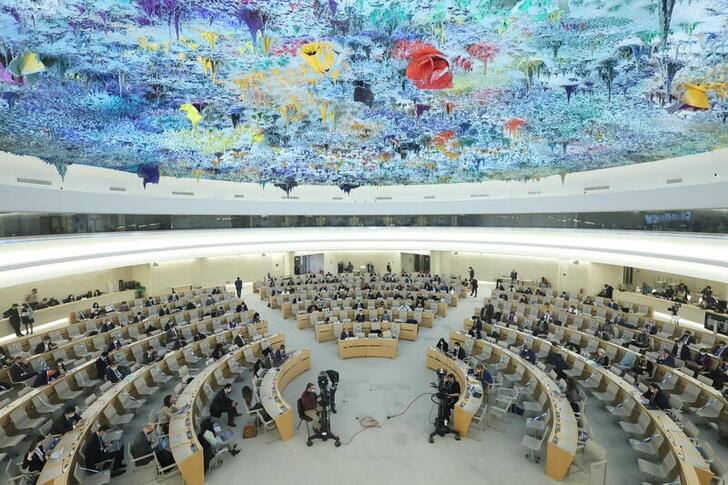 The countries condemnedvigorously all violations and abuses of human rights in Venezuelasome of which, according to the International Fact Finding Mission, may constitute Crimes against humanity”.

In another order, they urged the state of Venezuela to apply the recommendations contained in the recent reports of the United Nations High Commissioner for Human Rights.

In addition, they expressed their deep concern about the “continued erosion of the rule of law and lack of transparency in the process of appointing judges and prosecutors”; while strongly condemningwidespread politically motivated repression and persecutionincluding through the excessive use of force, arbitrary detention, torture and other cruel, inhuman or degrading treatment or punishment”.

In another item, they urged Venezuela to “immediately release all political prisoners and all other persons illegally or arbitrarily deprived of liberty”; and called for the Office of the High Commissioner and the International Independent Fact-Finding Mission have all the necessary resources and administrative, technical and logistical support to carry out their respective mandates.

The UN Independent International Fact-Finding Mission on Venezuela (FFMV) In September, it presented its third annual report, which focused on the crimes against humanity committed by the intelligence services that respond to the dictator Nicolás Maduro, and the human rights situation in the Orinoco Mining Arc region and other areas of the Bolivar state.

The investigators concluded that the torture perpetrated by the General Directorate of Military Counterintelligence (DGCIM) and the Bolivarian Intelligence Service (SEBIN) They were not isolated actsbut part of a “machinery” and “a government plan to repress dissent,” which was “orchestrated” by Maduro.

The forceful report concluded that the intelligence agencies of the Venezuelan civil and military state function as well-coordinated structures “in the execution of a plan orchestrated at the highest levels of government to suppress dissent through crimes against humanity.”

In this sense, the UN investigators detailed the functions and contributions of several officials of the Chavista regime at the different levels of the chains of command within the intelligence agencies.

“Our investigations and analyzes show that the Venezuelan State relies on the intelligence services and their agents to repress dissent in the country. In doing so, serious crimes and human rights violations are being committed, including acts of torture and sexual violence,” he said. Martha Valinaspresident of the UN Mission, who also urged the Chavista authorities to investigate these cases.

“These practices must cease immediately, and those responsible must be investigated and prosecuted in accordance with the law.”, he added.

In its previous reports, the Mission had already highlighted the significant role of the two military and civilian intelligence services of the Chavista regime, in particular the General Directorate of Military Counterintelligence (DGCIM) and the Bolivarian National Intelligence Service (SEBIN), in the commission of human rights violations since 2014.

From LatAm, Brazil and Paraguay voted in favor.

Shameful abstention of Argentina, presiding over the Council, Honduras and Mexico.

Foreseeable, against: Bolivia, Cuba and Venezuela.

The deputy director for the Americas of Human Rights Watch, Tamara Taraciukindicated on Twitter that “justice is slow, but it arrives. Those responsible for abuses will be brought to justice.”

He also reviewed that, from Latin America, “Brazil and Paraguay voted in favor. Shameful abstention of Argentina, presiding over the Council, Honduras and Mexico. Foreseeable, against: Bolivia, Cuba and Venezuela”.

“The regime threatened to hinder cooperation with the Office of the High Commissioner and possible damage to the negotiations. Despite this bully attitude, the international community stood on the side of the victims of the Maduro regime”, he highlighted.

The resolution was supported by nearly 50 countries in the world, including Brazil, Canada, Chile, Ecuador, the United States, Guatemala, Paraguay and Uruguay from the Americas.

He then indicated: “The resolution was supported by nearly 50 countries in the world, including Brazil, Canada, Chile, Ecuador, the United States, Guatemala, Paraguay and Uruguay from the Americas. Notable absences, which had previously supported the Mission, Argentina, Colombia, Honduras, Guyana and Peru. The resolution also extended the mandate of the Office of the High Commissioner for Human Rights to monitor the human rights situation in Venezuela. The office has a presence on the ground to document abuses and provide technical assistance,” he concluded.

Not all news on the site expresses the point of view of the site, but we transmit this news automatically and translate it through programmatic technology on the site and not from a human editor.
Sara Adm2022-10-07
158
Facebook Twitter LinkedIn Pinterest WhatsApp

One of two missing babies in Ohio dies

Federal co-participation: ups and downs, winners and losers of the distribution of funds in the last 30 years