The controversial haulage from Buenos Aires, which has been in the hands of the same two companies for 30 years, was once again under discussion. The Buenos Aires opposition met this week to try to cancel the service that it considers irregular, because the original contract expired two decades ago but also because, instead of leaving a profit for the government, the concession generates losses.

Legislator Juan Manuel Valdés (Frente de Todos) called an extraordinary session for Thursday with the aim of canceling the hauling until the new system is in operation, which the Buenos Aires government has already designed and hopes to put in place by the end of year. The Kirchnerism proposal immediately added adherents among the opposition ranks until it reached 28 signatures; there are only three more supports to achieve the proper quorum in the Legislature, a number that would allow him to approve the cancellation of the service.

“We want to avoid a new extension to a service that has been operating illegally for 20 years. We porteños deserve a transparent service that works to improve traffic and not to collect at the expense of citizens,” Valdés assured before the consultation of Infobae.

The consensus of the proposal reached, in addition to Kirchnerism, blocks that are ideologically antipodal. The project was supported by the referents of freedom advances, Javier Milei’s party, but also the Workers Party and the peronist Federal Consensus, represented by the legislator Eugene Casielles, key in the negotiations, was able to rebuild Infobae.

The key to obtaining the three remaining votes is in the hands of the Civic Coalition and United Republicans blocs, Ricardo López Murphy’s party, both allies of the Buenos Aires mayor, Horacio Rodríguez Larreta. “We hope that more blocks will be added, because in private everyone recognizes that this cannot continue like this,” added Valdés.

from the CC, however, they assure that the key to the problem is, on the one hand, in accelerate the tender that is already underway to implement the new service and, on the other hand, investigate why these two companies were allowed to operate the service along with the parking meter business with just a $55,000 monthly fee frozen since 2014 to the present.

“We are going to present a bill so that the Executive Branch does not have the possibility of extending the service with these two companies after 90 days of the award of the new tender,” said Buenos Aires legislator Facundo Del Gaiso. And he added that he will present a request for a report so that the government explains why these companies have been allowed to operate with expired contracts for two decades. 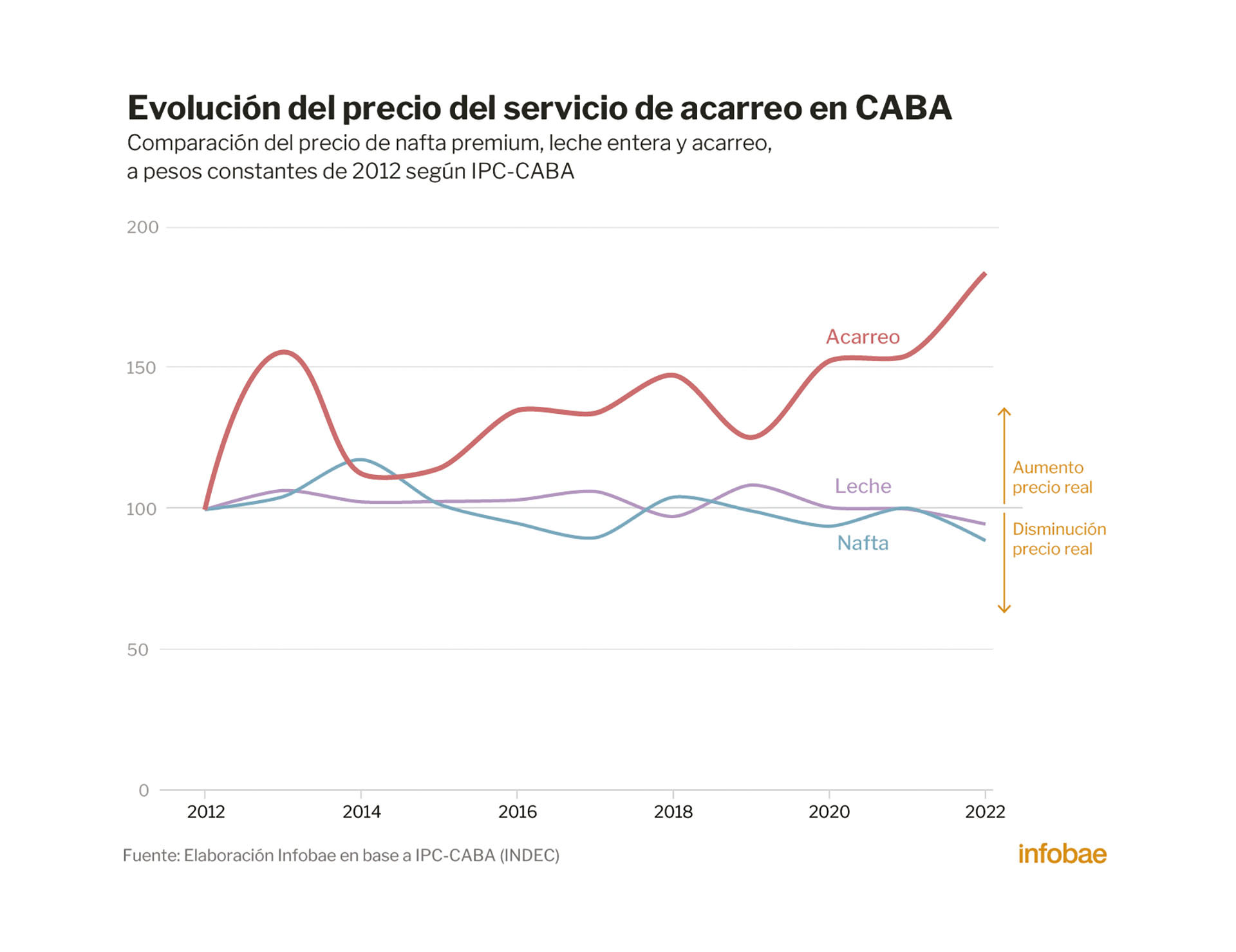 After Infobae revealed that the companies in charge of transporting badly parked cars only pay $55,000 to the Buenos Aires government, this Friday the call for tenders was announced to renew the system that was in charge of Dakota SRL and BRD Sociedad Anónima, Industrial, Comercial, Financiera e Inmobiliaria (SAICFI), who operate the business with the contract expired for 21 years.

As reported by the City of Buenos Aires in a statement, the new tender proposes an operation term of 10 years. In addition, “it provides for the renovation and expansion of operational beaches, the purchase of new vehicles and the modernization of equipment and facilities,” they assured.

One modification it introduces is that tenders only the hauling service, not including parking meters or metered parking, how it worked before. Each service starts to have different providers and specific rules for each activity. Another change with the current system is that providers will receive a monthly payment for the service offered, while the City will receive the amount that improperly parked cars must pay to repair their violation.

“This call for tenders was postponed for various protections after 6 renewal attempts in the Legislature, by means of different laws that were approved since 2013″, clarified the Buenos Aires government.

On the other hand, the coverage will not be limited to the current areas but it will be possible to solve situations of road coexistence in all neighborhoods. The territory will be divided into the west zone, north zone and south zone and each one will have 2 hauling beaches. 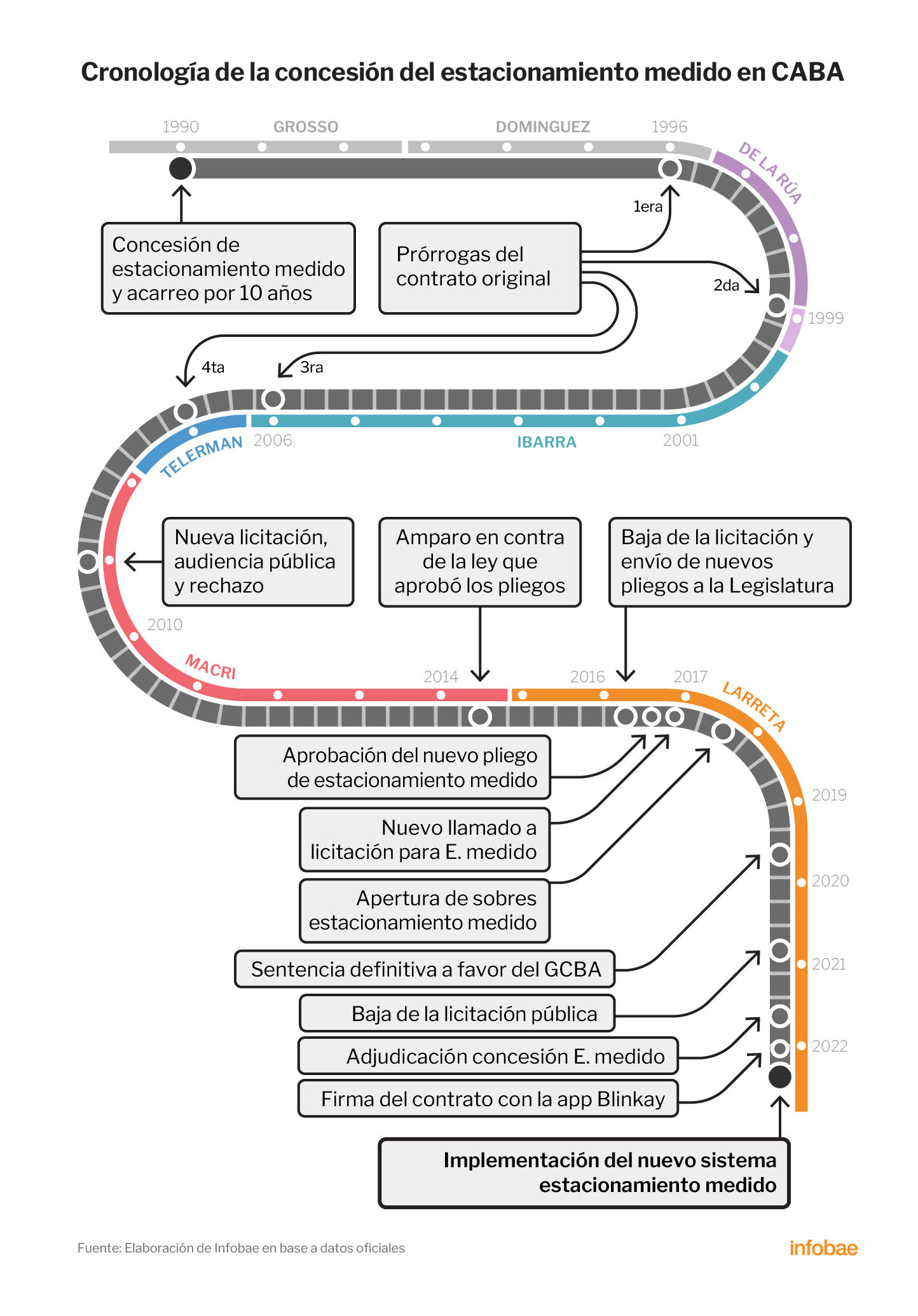 The tender is known after the investigation of this mediumwhich revealed that the hauling concession in the City of Buenos Aires is in the hands of Dakota SRL and BRD Sociedad Anónima, Industrial, Comercial, Financiera e Inmobiliaria (SAICFI), two companies that operate the business with the contract expired for 21 years .

In charge of hauling since 1990, these companies pay the Buenos Aires government a monthly canon of only $55,000 each to operate the service, as confirmed to Infobae official sources. The amount has been frozen since 2014 and that figure also included the concession of the old parking meters and ticking machines for the collection of metered parking.

All the proceeds from lifting cars in violation are income for BRD and Dakota, a company that did not present balances before the General Inspection of Justice (IGJ) in the last 4 yearsas confirmed Infobae. In 2021, there were 125,000 hauls made by these two concessionaires, which raised their turnover to $547 million, according to the calculation based on official data and the cost of hauling last year. However, the Buenos Aires government barely received $1.3 million of those funds, 0.2%.

Dakota and BRD won the first tender in 1990, for ten years. The tender specifications allowed the companies to continue with the service after the concession contract ended. The Buenos Aires government continued the expired contracts in 2001, through successive Acts of Agreement and Precarious Use Permits that were observed by the City Audit.

A decade after the expiration, in 2011, the Legislature modified the Transportation Code and set deadlines for a new tender that would be in charge of the Buenos Aires Executive. That term, originally one year, was extended in 2012, 2013, 2016, 2018 and 2020 by the Legislature with a majority of the local ruling party.

The Buenos Aires Government only charges $55,000 per month to the companies that handle the millionaire business of car transport
The city of Buenos Aires launched the new tender for the car hauling service

Jordan Peele hints at meaning of ‘No’, says it’s ‘different from anything that’s come before’