Ten days after the consecration of Argentina as champion in the World Cup in Qatar, the image of Lionel Messi raising the World Cup that moved the Argentine people is replicated in different murals throughout the country, from Córdoba and Santa Fe to Palermo in Buenos Aires and the Buenos Aires territory by the hand of artists who quickly went out to eternalize through art not only the face of the iconic striker but also the phrase that became the hit of the year: “What do you look at, bobo? He’s going over there”.

At the intersection of Darwin and Gorriti streets in Palermo Hollywood, a mural has just been erected of the idol in the black tunic that was given to him during the award ceremony in Qatar, lifting the World Cup with some teammates: Emiliano Martinez, Rodrigo de Paul Y Leandro Paredes. Its creator, the renowned Maradona muralist Maximilian Bagnasco, I was confident that this time the Argentine National Team would win. “I waited for the moment when Messi would raise the cup because I wanted to portray that on a mural,” says the artist about the origins of the work.

After seeing the different images of the award of Argentina as champion in the Lusail stadium in Qatar, Bagnasco considered that Messi wearing that black tunic was “unique”. “It was the first moment that Messi raised the cup and I decided that it had to be that. Many said that it had to be another where the shirt was seen more, but this image was the one that really differed from other world cups”, the artist maintains about the final choice. The garment is used in the Middle East to pay tribute and show admiration to a person who is of high social status. They were also awarded to warriors when they won a victory. “In their culture it is something important and it’s good, you have to respect it,” says Bagnasco.

The mural condenses the happiness of the 7 Ballon d’Or winner who achieved what he so longed for. For the artist, it also exudes “courage” because “despite being told everything and having all the weight on him, he continued to play.” This tribute on the wall of the Buenos Aires neighborhood was immediately transferred to the maps on the web. “The day after I started the mural, I wanted to order a coffee through an application and I saw that the corner appeared as ‘Esquina Messi’. It seemed crazy to me, because I came from painting Maradona in Italy where the mayor decided to change the name of the street to Via Diego Armando Maradona”, says Bagnasco. “Here, barely two days had passed, people decided that this corner had to be called Messi”, says the muralist, still surprised. 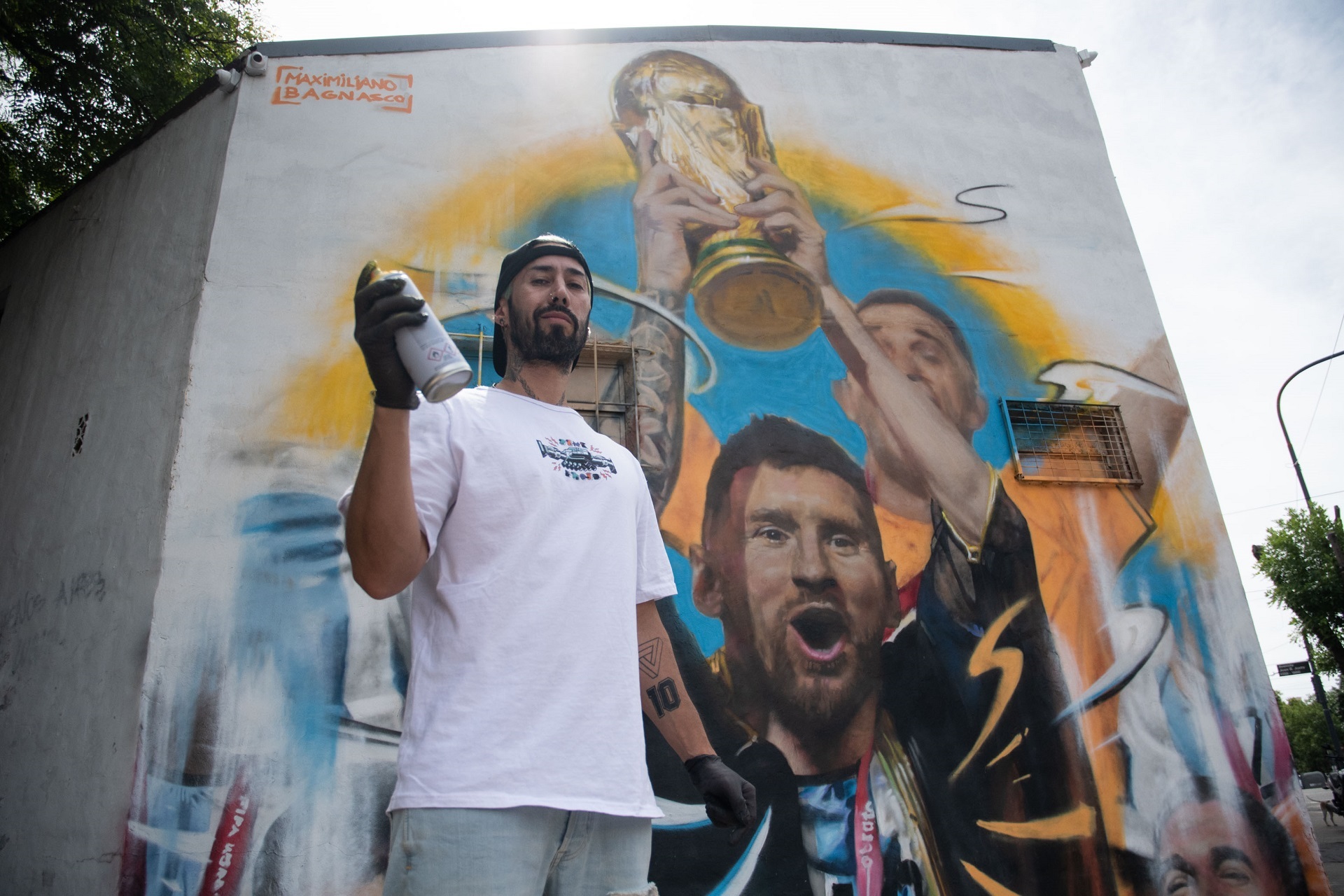 The muralist Maximiliano Bagnasco (Photo: Camila Godoy / Télam SE)
It may interest you: Cinema and poetry for the popular celebrations for the triumph in the World Cup in Qatar

“What a look, fool”: from Qatar to Villa Fiorito

During a report made after Argentina’s fiery match with the Netherlands team, Messi launched the phrase “What are you looking at, silly? Andá pa’ allá” that soon went viral on social networks. And not only that: it quickly gave rise to an alluvial offer of cups, t-shirts, key chains and mates. And now it has also taken place in the Fiorito neighborhood, a location “patented” by the other great national and universal soccer idol: Diego Armando Maradona.

Villa Fiorito is full of images of the so-called “cosmic kite” on the walls of the neighborhood but, after the expression loaded with mischief and Maradonian tinge launched by Messi, the captain gained prominence in this geography. This time, his face appears on the mural along with the already famous phrase and the colors of the flag. The same expression appears on a corner of La Plata, at the intersection of 1st and 67th streets, the result of the initiative of a family from the area.

Also on Calle Bolivar 947 in San Telmo the artist Mario Abad portrayed an iconic moment from the match against the Netherlands: the tribute that Messi paid by reproducing the famous gesture of Román Riquelme, in this case in front of the coach’s eyes louis van gaal, simulating Mole Gigio. At the time, the Dutch coach had a bad relationship with the Boca player and Messi resorted to this wink as a response to Van Gaal’s criticism prior to the game.

Towards all the cardinal points it is possible to find exponents at the service of honoring the captain of the Argentine team. In Balcarce, to the southeast of the province of Buenos Aires, is in fact the mural made by Nicholas Lahitte in 2018, just before the World Cup in Russia begins. The artist painted the star smiling with the light blue and white shirt on 26th Street between Avenida Favaloro and 15 in that Buenos Aires town.

During the course of this championship, the work became a sanctuary where the neighbors placed candles and some objects such as balls and rosaries. Hours after the Argentine victory, the muralist rediscovered his work and decided to paint the World Cup on Messi’s shoulder. “Adding the Cup was like a kind of promise, almost everyone did one. It was not planned, it happened during the final game. Some friends said that if we won we had to go light candles, and I said that if we went, I would paint the Cup”, explains the artist. 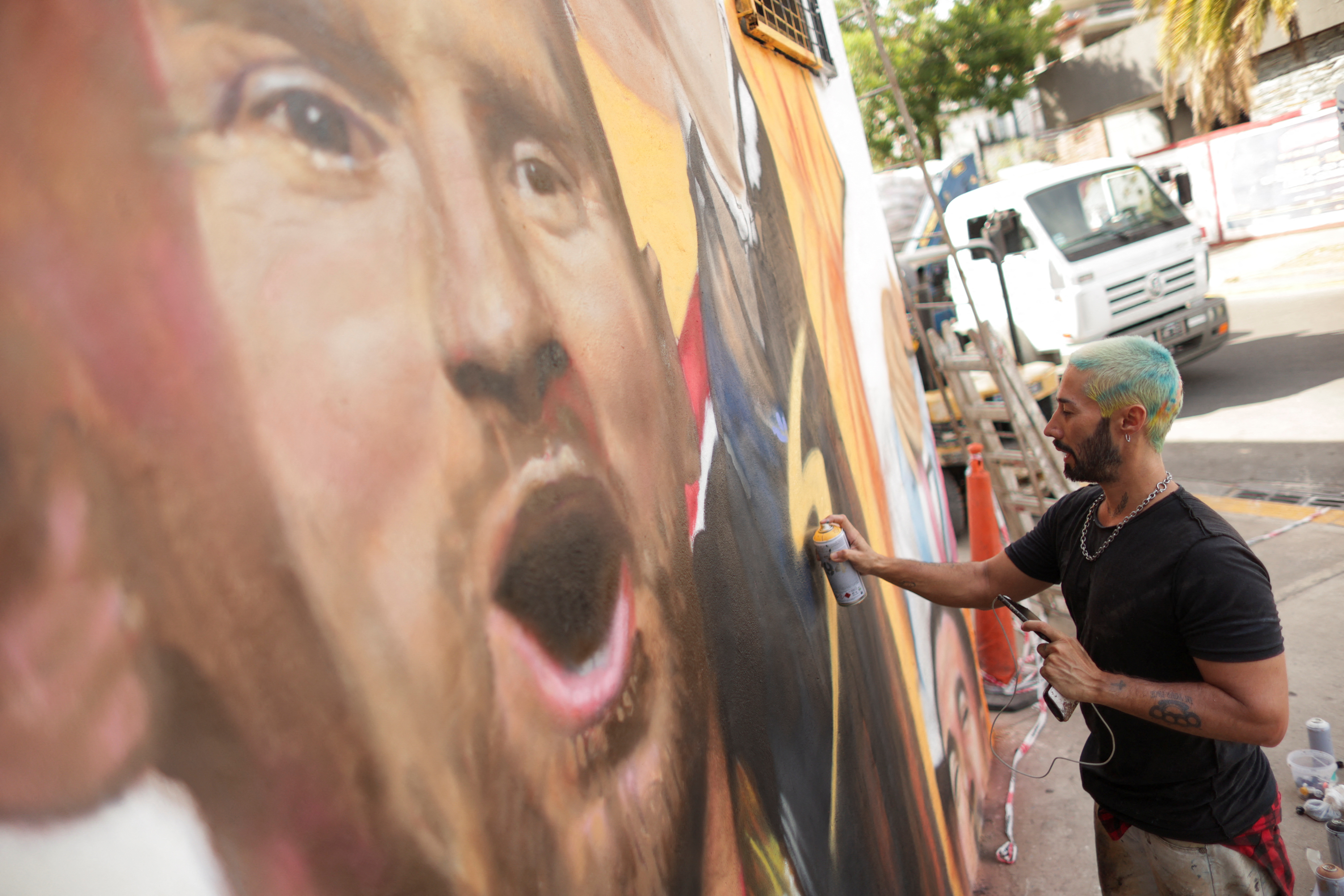 The muralist Maximiliano Bagnasco and his work in homage to the triumph of the Argentine team in the Qatar 2022 World Cup (Photo: REUTERS / Tomas Cuesta)

In the city of Quilmes, in the south of the province of Buenos Aires, the team of Art and Muralism of the municipality also decided to represent the joy of the Argentine people after the victory in the final in Qatar with the image of Messi. The mural has a background with confetti in the colors of the flag and the former Barcelona player raising the trophy behind him. While to the southwest of Buenos Aires, on the wall of the Sports Center of the town of Puán, Jonathan Ramborger he illustrated the captain adjusting the ribbon on his arm with a serene look. The proposal came from the municipality and the young artist did not hesitate. “Messi is a positive influence in the personal sphere but fundamentally in sports, due to his effort, delivery and dedication,” he points out.

For the artist, “being the captain is being the representative, the one who stands in front, the one who carries the flag and binds the sticks when things don’t go well” and Messi “held up excellently.” Says Ramborger: “He has been criticized a lot unfairly and he overcame everything. He had an objective and he was able to carry it out as a group ”. And he adds: “That meaning seemed important to me in a sports center.”

“As Argentina advanced in the World Cup, the mural also advanced,” he says about the artistic process. On Saturday the 17th, one day before the final, the mural received its last brushstrokes. With the result of Argentina as world champion, the inhabitants of Puán went to celebrate with the work and took photos. “It is associated with a moment of collective joy, that makes it more powerful and I love it”, concludes the artist.

Other images that are resignified from the dreamed victory

The captain of the Argentine National Team has dedicated a large number of murals in different areas of the country that honor his football career. In Rosario, his hometown, artists Marlene Zuriaga Y lysander Urteaga They photographed him last year wearing the albiceleste and with his hand on his heart on the party wall of a 69-meter-high building, further magnifying La Pulga. The work, entitled “From another galaxy and from my city”, accompanied the celebration of thousands of people who gathered in the streets of Rosario to celebrate “their” champion on December 18.

But art and celebrations do not come together only in the neighborhood of the idol’s childhood. the muralist robert cortez, a native of Córdoba, began a hyper-realistic work around the figure of Messi after the consecration of the Argentine National Team in the Copa América that took approximately six weeks. On a wall in the Cordoba town of San Francisco, the artist illustrated the different stages of the player some time ago with the intention that the mural recounts “the sacrifice, dedication and discipline” of the player. 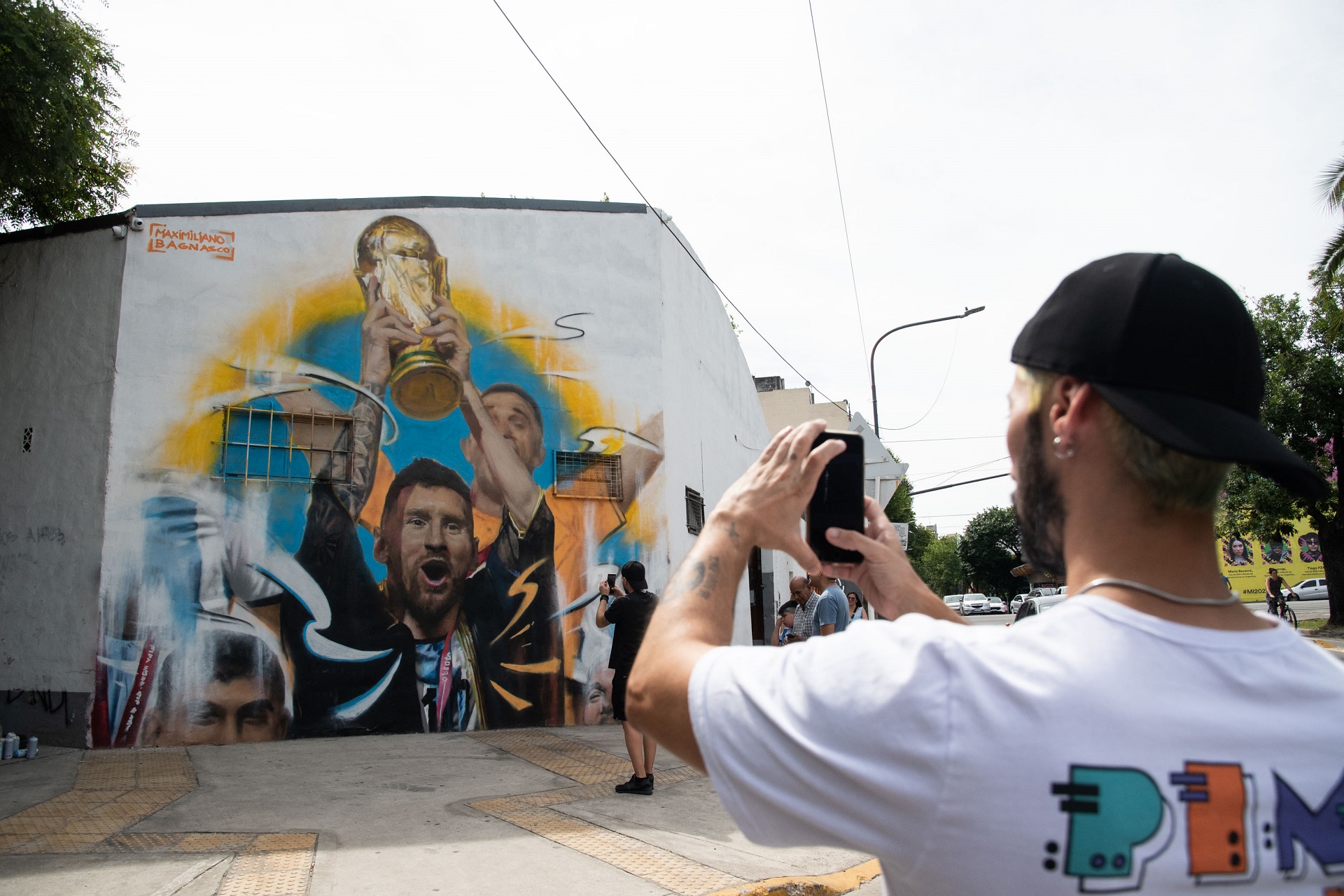 Intersection of Darwin and Gorriti streets in Palermo Hollywood: Messi with the black tunic and the World Cup (Photo: Camila Godoy / Télam SE)

Against the background of an Argentine flag, Cortez recreates different images of the Argentine star: one as a child with a Newell’s shirt, another of him as an adult making his iconic salute with his index fingers raised and another shouting a goal. After the Argentine National Team won the World Cup, the creator approached his work again because he considered it to be incomplete. “The image of Messi was missing in his last World Cup, and with the cup,” he says.

“Messi worked a lot, he made an effort, he gave up everything for our beloved country and in the end he got what he deserved. He leaves a very important lesson to all Argentines: sometimes dreams come true but behind them there is a lot of work. In this case, more than 16 years,” says the artist, who included the image of the current Paris Saint-Germain player smiling with the bisht and the World Cup in his arms in the center of the mural.

The work, in addition to condensing the footballer’s dedication and being part of a celebration, implied for the creator “a strong defense” of Messi in front of technicians and journalists who criticized him before this conclusive victory was given. “I would think he doesn’t need it because they don’t speak for us. All the citizens are very grateful to the players for their dedication and love for the shirt”, says the artist and adds: “As Lio was the target of criticism, I wanted to give him my most sincere support”. The meanings given off by the murals are inexhaustible and carry lessons. “The Argentine is used to the effort that is rarely rewarded and this was like a victory for all, I think that’s why we feel so identified,” Cortez concluded.

Not all news on the site expresses the point of view of the site, but we transmit this news automatically and translate it through programmatic technology on the site and not from a human editor.
Sara Adm4 weeks ago
239
Facebook Twitter LinkedIn Pinterest WhatsApp