Two newsletters ago, I ended the column with “Zoom out. Think longer. And wow, none of you listened. By y’all, I mean ‘all y’all’, the insistent Mr. Market reacting violently to news, old news and no news Sometimes good news is even bad news.

The market is doing strange things, and so this week I wanted to zoom in on the initial market reaction during and the retracement following Fed Chairman Jerome Powell’s May 4 press conference. This week’s newsletter will be heavy, but the charts are necessary to tell the story I want to tell about today’s markets and Mr. Market.

That (and maybe more…) below.

you read Crypto long and shortour weekly newsletter containing ideas, news and analysis for the professional investor. register here to receive it in your inbox every Sunday.

Eight times a year, the Federal Open Market Committee (FOMC) meets. The FOMC is part of the Federal Reserve System (the “central bank” or the Fed) in the United States and is made up of 12 presidents of different reserve banks (the regional banks that make up the central bank). The FOMC is headed by Powell. When the FOMC meets, it reviews economic conditions, determines the appropriate monetary policy stance, and assesses the risk to its long-term goals of price stability and sustainable economic growth. After the meeting, the president holds a press conference to discuss the FOMC’s view on the economy and announce changes to monetary policy – usually through a change in interest rates.

On Wednesday, such an FOMC meeting took place and Powell announced a 50 basis point increase (in total, 0.5%) in the federal funds rate around 2:30 p.m. ET. I specifically mention the weather because that’s the main thing I want to zoom in on this week. The photo of Powell’s face in the following graphics marks the start of his press conference. The charts cover a two-day period, Wednesday through Thursday. 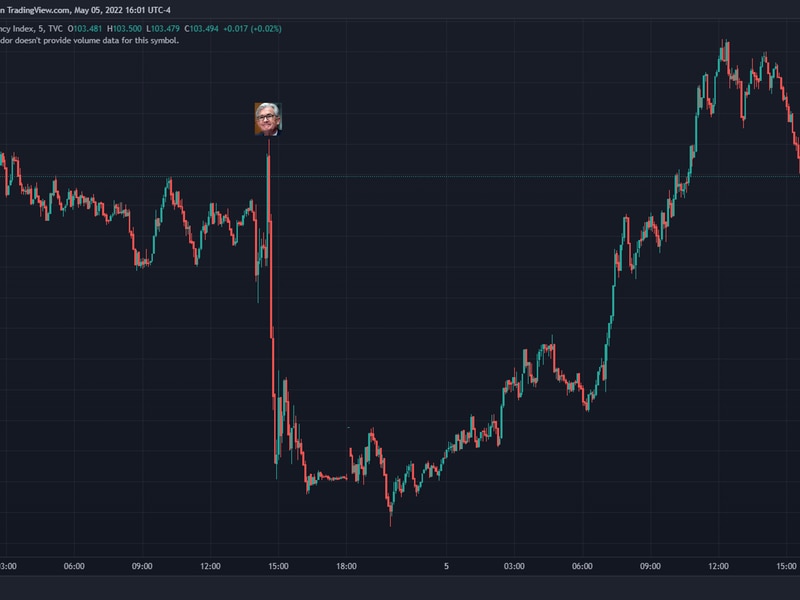 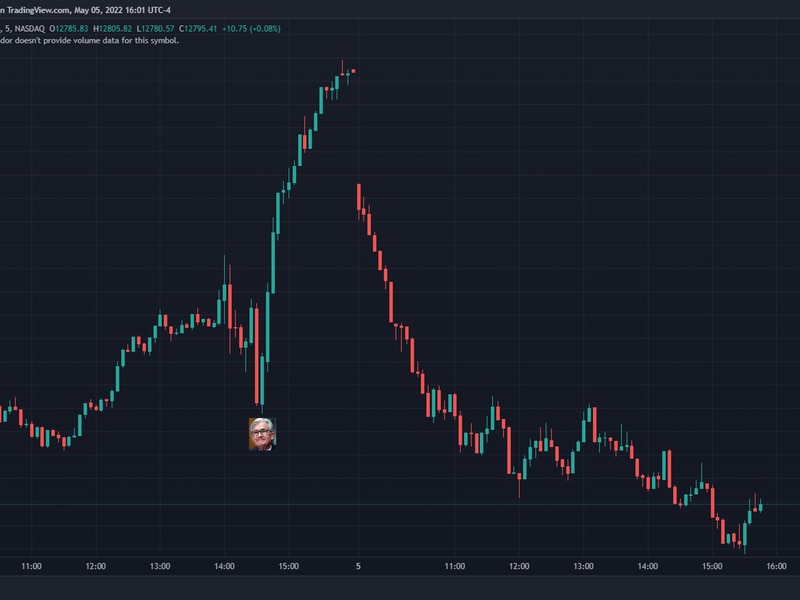 The 10-year US Treasury yield: 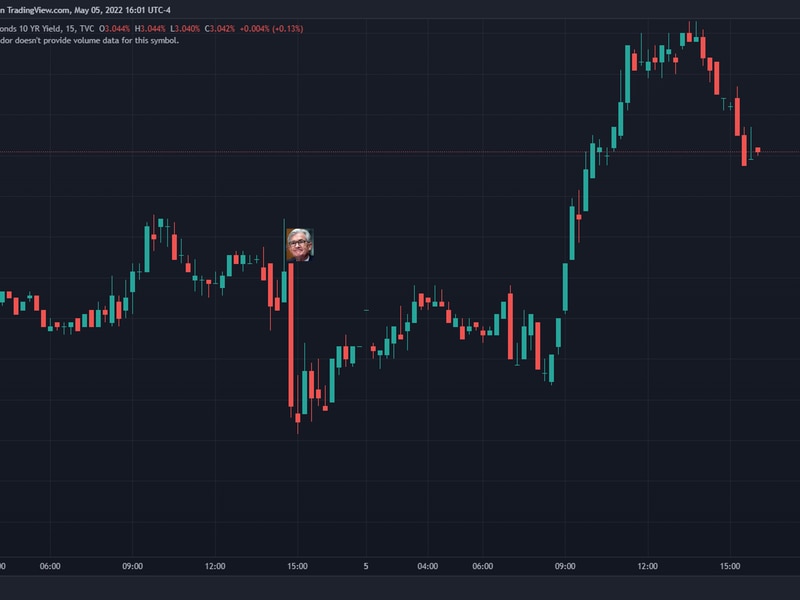 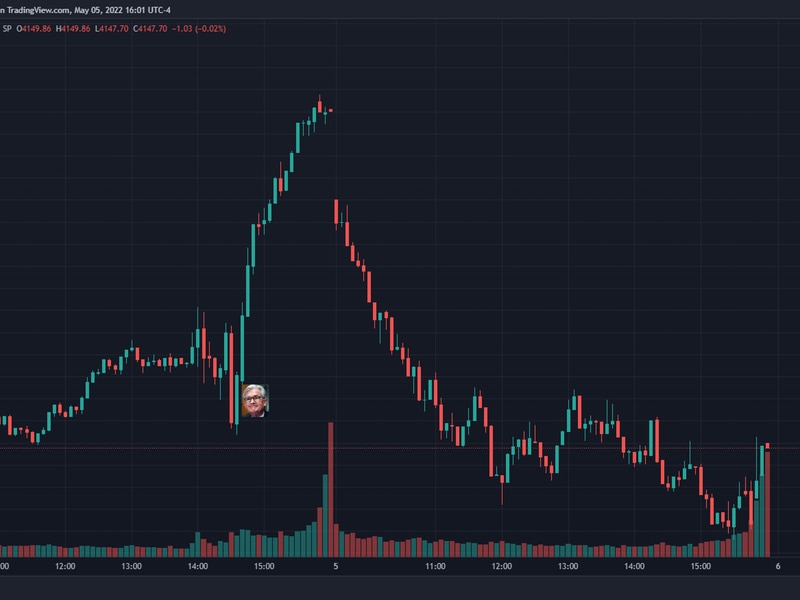 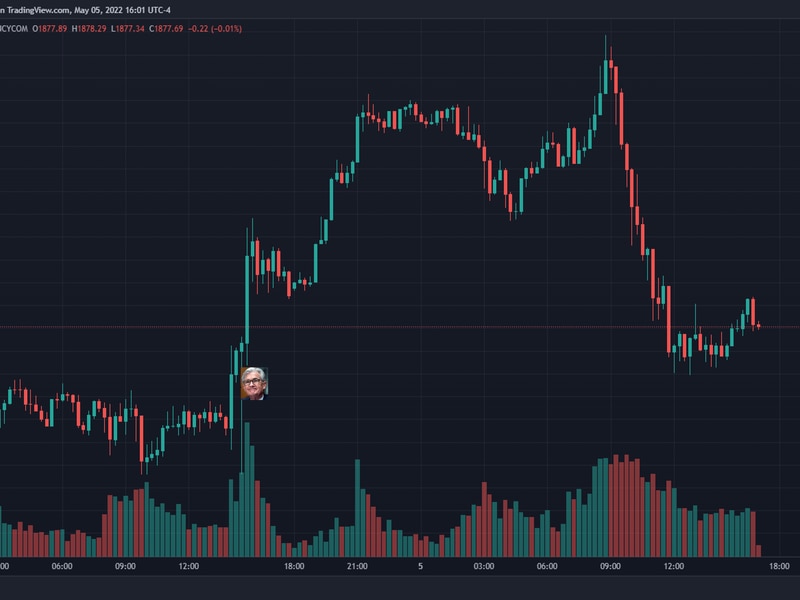 Around 2:30 p.m. ET, all of those markets reacted. Bitcoin, Nasdaq 100, S&P 500 and gold rose; the 10-year yield and the US dollar fell. Less than 24 hours later, all these movements have reversed as if nothing had happened. And then they kept reversing (bitcoin was wrecked on Thursday). It was almost as if Powell released a statement saying, “Psych!” and backtracked on everything he said at the press conference.

Before we go any further, what did Powell tell us and what should have happened? Powell’s comments shouldn’t have been positive for risky assets like stocks – period. Rising rates, inflation taking economists by surprise, and a contraction in the country’s gross domestic product in the first quarter don’t exactly scream, “Wow, the economy is doing great – more risk please!”

Powell and the Fed also appeared to have replaced “inflation is transitory” with “we will have a soft landing.” It basically means the Fed is thinking, “Okay, inflation is high, but we’ll get this under control without going full Volcker.” Full Volcker refers to how former Fed Chairman Paul Volcker reduced inflation from 15% to 3% between 1980 and 1983 by raising interest rates to as much as 20% – which would have been great if there hadn’t been a recession at the time.

Okay, but the markets ended up reversing and doing what was expected of them. Is it important? I think so. Here’s why.

First of all, it lends more credence to the point that I made three narrative market movement newsletters ago. I admittedly stole this idea from Benjamin Graham, the spiritual father of value investing and Warren Buffett. Graham used Mr. Market as an allegory in his book “The Intelligent Investor” to describe the irrationality of the stock market and groupthink.

Markets (especially short-term) are story-driven because of Mr. Market. On Wednesday, Mr. Market thought a 50 basis point interest rate hike was not bad and was unaware that inflation was high and GDP was contracting. The very next day, Mr Market said: “Oh wait, that inflation was pretty high. I’m afraid of inflation now. Cue the market reversal.

Second (and I admit that might sound alarmist on my part, but whatever) it highlights the dangers of a highly connected, information-rich world where high-frequency trading and quantitative firms scour the internet for clues on how to trade everything. And these companies can react to news faster than anyone else. And sometimes they can react “incorrectly”. And now even Mr. Market can react quickly. One of the stated goals of the FOMC is “price stability,” and while that price stability goal relates to goods and services, market volatility is also destabilizing. It probably goes without saying (but I’ll say it anyway): Instability is generally not good.

Finally, and this is really my main point, the market is a bit… uh… absurd? I do not know. At the very least, it’s too reactionary to take it seriously at face value. The market continues to cry wolf. Whenever the market reacts to news, we should all collectively take a breather and really think about what the news means.

With that, I urge you again: Zoom out. Think longer.

Not all news on the site expresses the point of view of the site, but we transmit this news automatically and translate it through programmatic technology on the site and not from a human editor.
Facebook
Messenger
WhatsApp
Twitter
Google+
Posted by Eleon In Business Last Modified 3 months ago 3 months ago

Record of resignations in France: how to interpret this phenomenon?

What are the new features? – NBC Los Angeles

US to ship $775 million arms package to Ukraine