A napkin can eloquently stage homophobia in certain parts of the world. When Brent Alberghini (New York, 45 years old) worked in a community center in Mexico where food was given to impoverished people, he gave two napkins to an “effeminate” looking boy who needed them to use in a public bathroom. The head of the dining room told Brent that she couldn’t give them to him because they didn’t even have the resources for that. “You gave it to him because he’s gay, right?” She angrily reproached him. “What are you talking about,” he replied, “I gave it to him because he’s a human and he had to use the bathroom.”

On the way out, the boy saw them arguing. He said that he didn’t want to cause them trouble, that he just wanted to use the bathroom, open to anyone. Brent was trying to explain to the woman that there were LGBT+ people all over the world and in all social groups. The boy left and she, in addition to saying “rude, gay”, yelled at him that this was “her community’s problem”, that she was always looking for “special treatment”, when that place was “for poor people” .

Frustrated and angry, Brent chose to leave the place where he had been volunteering for two years and cultivating relationships between the workers and the people who came to eat there. With that same project he had won a scholarship to perform a theater on wheels, in a truck with a stage that presented musical bands, circus groups and a series of cinema queer, to which his boss also reproached him. 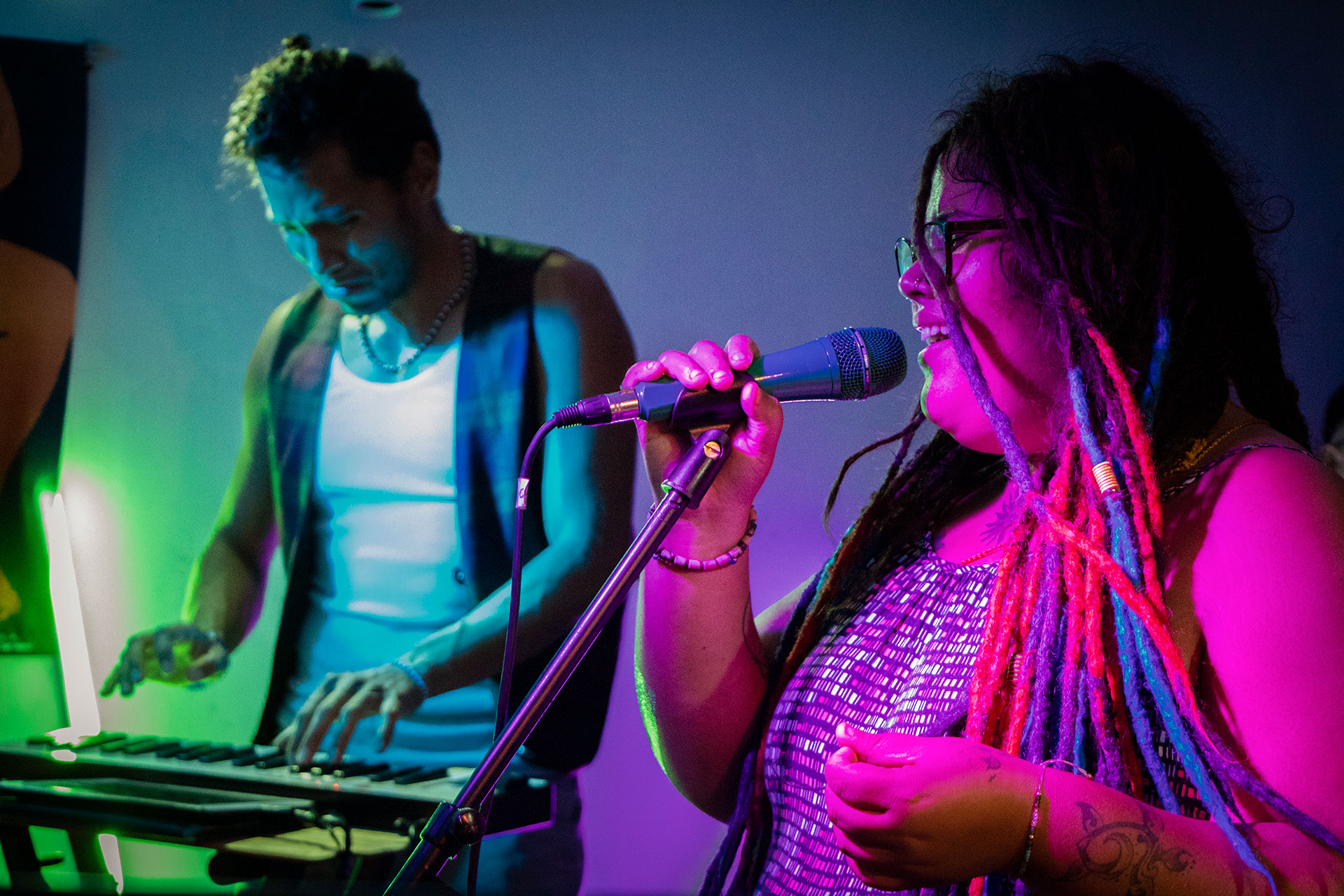 On weekends, the dining room becomes the stage for music shows, poetry, vogue, and more.

One of the cooks at that center, aware of Brent’s enthusiasm to help, told him some time later: “If you want to open your own dining room one day, let me know.” That’s how it went. With his love for volunteering – which he has carried with him since he was 12 years old – he worked at a help center for older adults run by a trans senior activist. He ran a small daily meal program but had to shut it down when the pandemic hit in 2020, so he opened a food bank from his home with pantries to provide weekly food during quarantines in conjunction with LGBT+ community organizations. .

When the Covid-19 vaccination began, she raised funds to open Manos Amigues, a soup kitchen for LGBT+ people located in Colonia Guerrero in Mexico City. About 250 meals are provided there Monday through Friday, every week. The dishes are served from 1:00 pm and are finished two hours later or less. Each menu contains soup, tortillas, rice, beans, a main dish that changes daily, flavored water, and a dessert. On Fridays they serve mole with chicken (it runs out faster) and most eat it on the spot. The cost is accessible: eleven Mexican pesos (less than one dollar), destined for self-sustainability expenses and payment of personnel. On July 23 they celebrated their first year.

All the people who work at Manos Amigues are part of the LGBT+ community, with the exception of the cook, who told Brent to call her when she opened her own dining room. But she, says Brent, has a son and two gay brothers, as well as a trans daughter, who works there every day. “You’re part of the community,” he tells her. 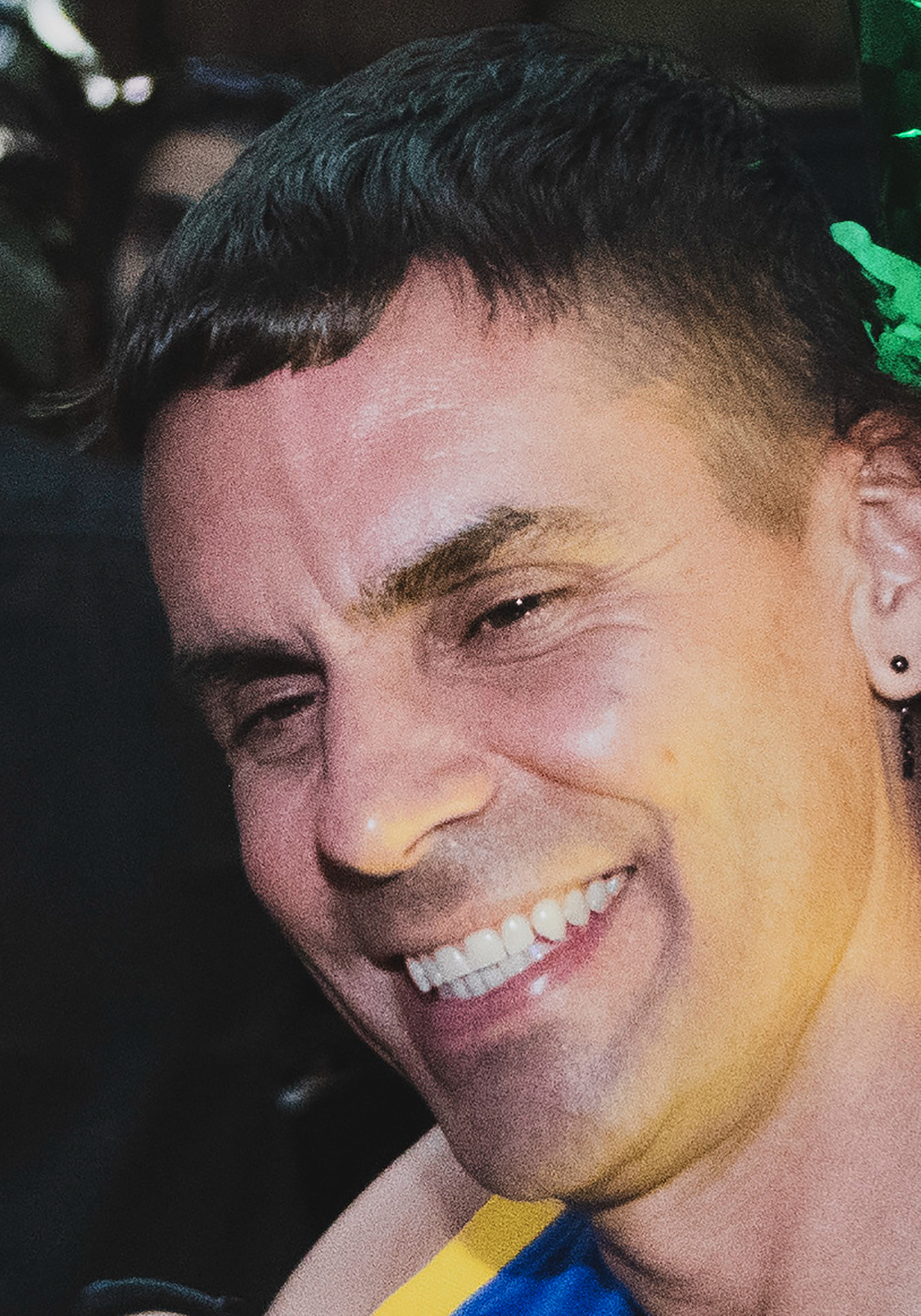 Brent is a New Yorker who studied gender and feminist theories. As a child he began to volunteer.

The dining room is attended by people from any area who are in need. Alberghini calculates that 65% of visitors belong to the elderly, aged 65 or over, and 30% to the LGBT+ community, to whom it seeks to provide a safe and discrimination-free space. Homeless people, residents of the sector and migrant population arrive. Some cannot afford the eleven pesos, but are helped by free food programs.

For their financing, they receive donations in kind, from private entities (“increasingly”), and individuals interested in supporting the LGBT+ community. Brent knows that in many cases they do it “because LGBT+ people are very fashionable”, but large corporations have joined without asking them to include their logo. They also have support from a government agency with a network of more than 500 public kitchens.

“We do not want to feed only the body and the stomach, but also the soul. People leave Manos Amigues not only with a full belly, but with hope and inspiration to open another door in their lives”, adds Brent, because on weekends, in the same place on Pedro Moreno street, the space The dining room is transformed into a stage with live shows, theater, music, vogue, poetry, rap, and more. The 7 people who work every day in the dining room provide service in the bar-kitchen during the shows, in addition to another five who complete the group. 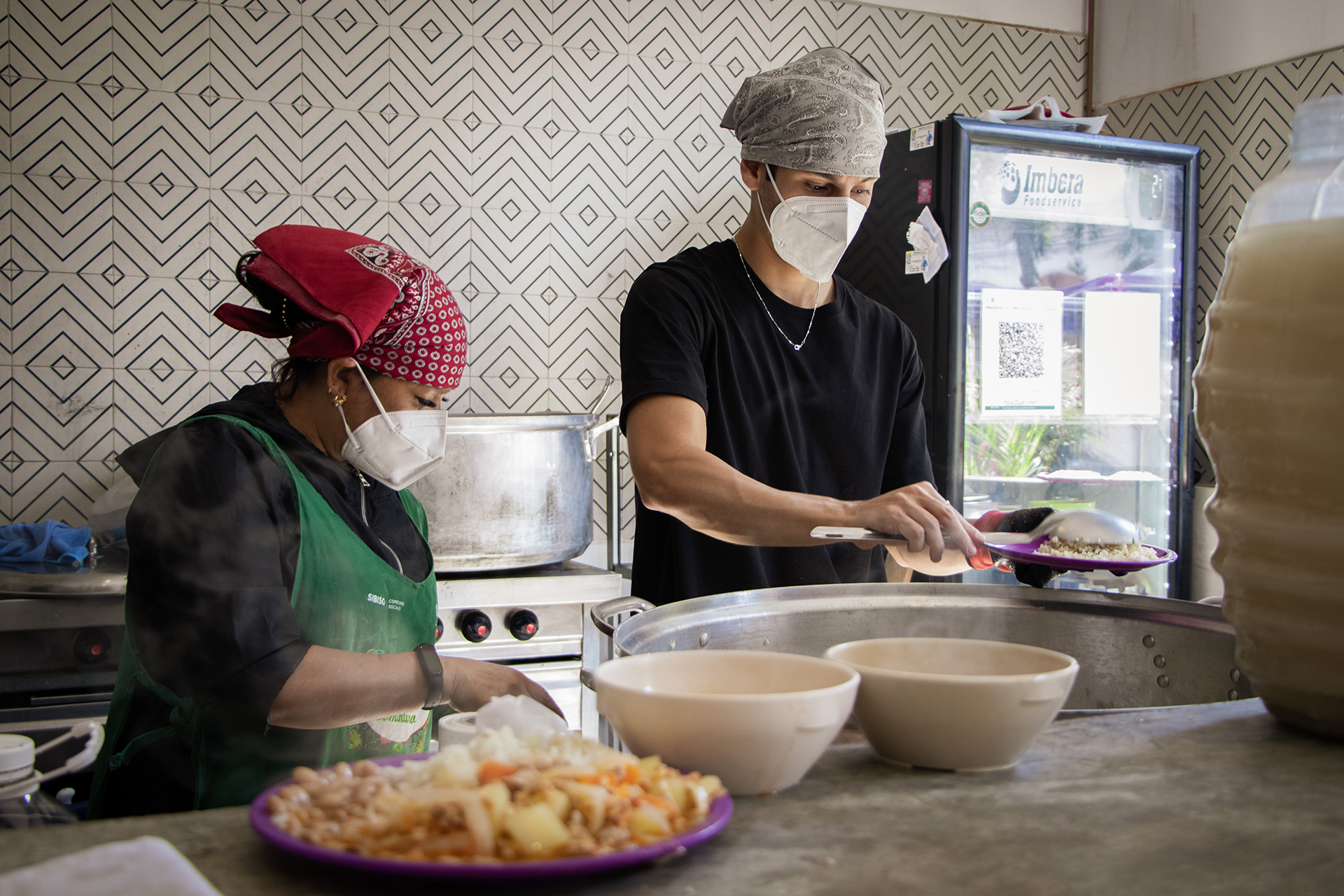 In the dining room, located in Colonia Guerrero in Mexico City, some 250 meals are served daily from Monday to Friday.

Among those who have appeared is the American musician and director John Cameron Mitchell (“Hedwig and the Angry Inch, “Shortbus”), friend and ex-partner of Brent and one of the most regular and generous donors, who did a benefit show last May when he was in Mexico City for the Pride celebrations.

Brent Alberghini has been living in Mexico for fourteen years, ten of them in the capital. Before arriving he worked in New York, where he frequently goes to visit family, friends and follow projects. This interview is granted from New York, where he is preparing a summer dance festival. He is very active, it is evident, but he does not like to work only for money. “I am not satisfied just working like this. It is empty to do it just for money, it gets boring after a while and it is difficult, ”he tells Infobae.

In New York, before coming to Mexico, she worked at a center for people with HIV focused on black and Latino people with drug addiction. In San Francisco he was a gardener after his university studies, which he did between his hometown and London: he studied feminist theory, sociology and gender studies. 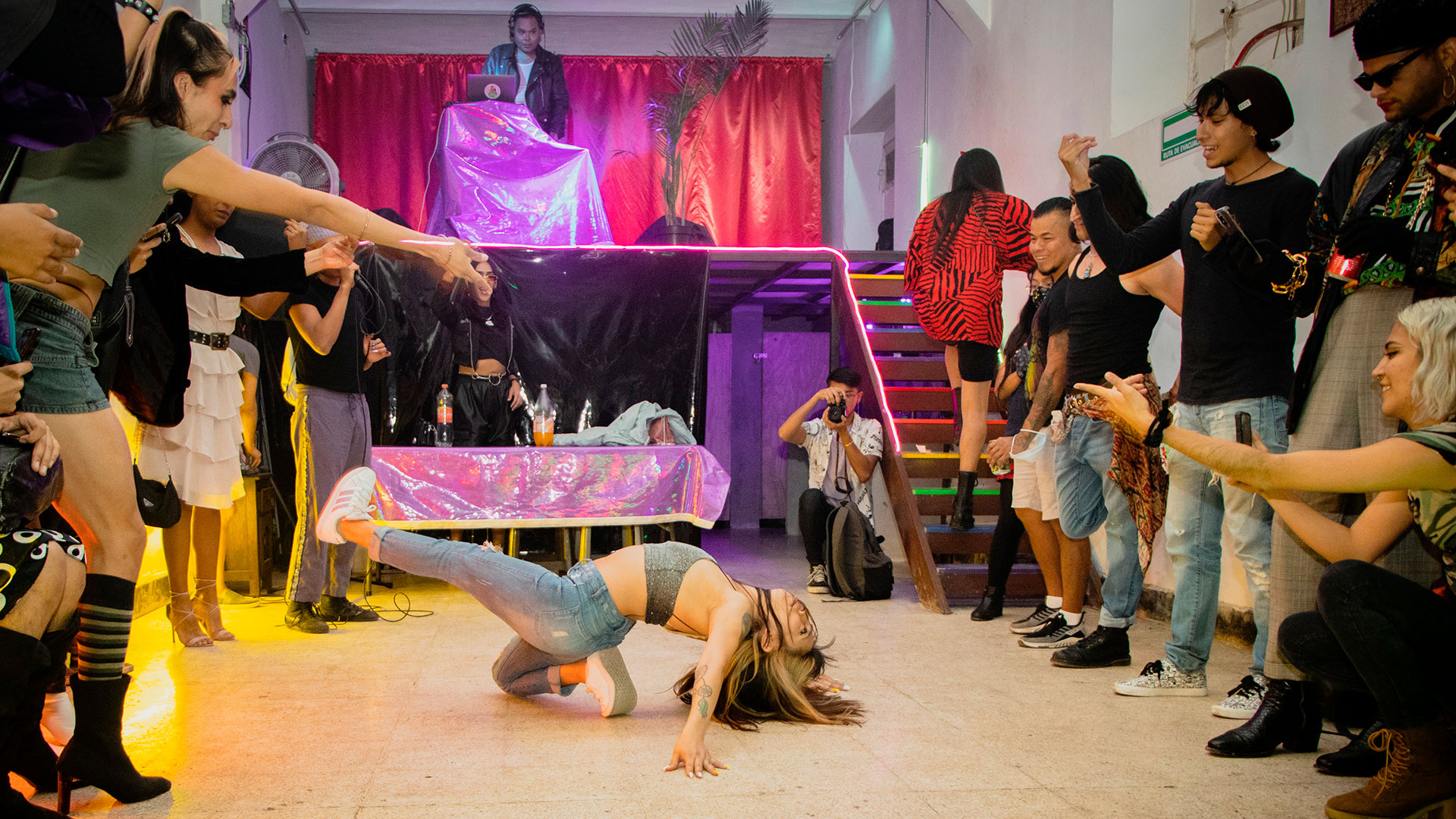 The dining room also offers shows of all kinds of artistic disciplines.

But perhaps what most influenced him in his life as a volunteer was that at the age of 12 his parents took him to work in a soup kitchen of a Catholic Church that served homeless people. “My parents said they were recovering Catholics, but there were ideas in the churches about compassion and social work that were taken over by the social movements of the ’60s and ’70s that were promoted by the hippies and the cultural revolution.” At the same time they drank from Buddhist philosophies, those of Martin Luther King and the idea that “everyone, all of us, have a common bond”. “If you want a community that is better for you, you have to help create it, because we are not an island and we are connected”, summarizes Brent.

He currently says that he will look for what to do “to survive” in addition to volunteering, which seems to be what fills his heart the most. “It is important that everyone make one in their life. That they go volunteer at animal shelters, or a children’s hospital, or whatever they really believe in.. It is difficult for many, people are always working and do not have time. But it is important to do things like that to create a community, ”she emphasizes.

He fled violence in Guatemala and in Mexico opened a shelter for LGBT+ migrants
John Cameron Mitchell: “The woke culture is bad for art, you can’t go through life being a police officer without humor”
Do you want to work in your company? Before, you have to answer a questionnaire about sexual diversity

Not all news on the site expresses the point of view of the site, but we transmit this news automatically and translate it through programmatic technology on the site and not from a human editor.
Sara AdmJuly 27, 2022
Facebook Twitter LinkedIn Pinterest WhatsApp