Argentine stocks listed in the United States embarked on a negative path that started on Friday the 12th, before the midterm elections, but which accelerated when the opposition triumph in the elections. This Monday, with a holiday in the local square, the negative trend extended to deals with Argentine assets on Wall Street.

Since the highs reached on November 10, when private securities registered their highest prices in dollars since March 2020, and record values ​​in pesos, the average decline was 12.7% in dollars – “counted with settlement” – and 11.7% in pesos. 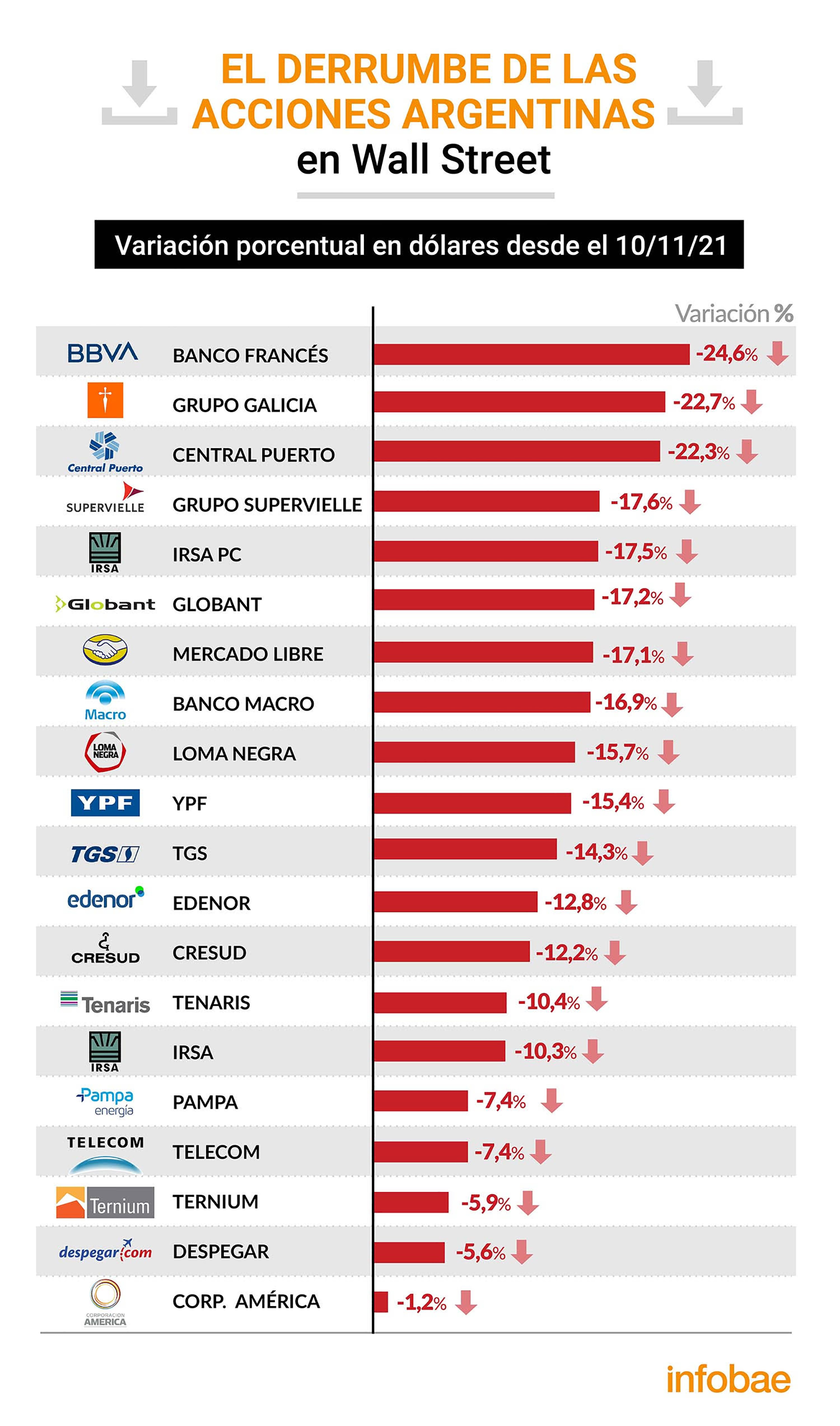 The ADR of banks are the ones who experience the steeper drops. The exposure of banks to Treasury bonds and also to Liquidity Letters (Leliq) issued by the BCRA is seen as a sign of weakness for banks’ balance sheets.

The PASO and the curse of the “triple ceiling”

Although at first it was discounted that Argentine stocks and bonds would undertake a firm upward path from the surprise defeat of the ruling party in the primaries of September 12, what happened was a series of twists and turns with a clear “resistance” for the local market.

In two months, the Merval panel touched three highs since March 2020 -when the world accused the economic impact of the restrictions against Covid-19- in the area of 450 dollar points, what in technical analysis is called a “triple top”. The first, the September 13th, which unleashed rapid opportunity sales when the versions of a “Plan platita” from the Government to reverse the result in the legislative.

The second peak occurred on October 26th, but this one found another barrier with the official plan of price freeze, a poor sign due to its ineffectiveness in attacking the inflationary acceleration, and the absence of news about an agreement with the IMF.

The bullish effervescence had a third episode a few days after the legislative, between November 10 and 11, when a larger victory was discounted for the opposition. The expectation of a government more inclined to dialogue and negotiation with the loss of parliamentary majorities fueled the renewed commitment to local actions. After the vote, the proposal of a multi-year economic plan sounded more like an entelechy to distract public opinion, while the “Celebration of defeat” on the Day of the Militant Peronist, with a full Plaza de Mayo, was also a sign considered negative from the political point of view.

Bonds in dollars continue to be punished in the absence of concrete progress with the IMF ”: they have lost 15% since the primaries (Paula Gándara)

The simpler reading is that the defeat of the coalition candidates of the Frente de Todos did not arouse expectations for a rectification of imbalances fiscal and economic and financial variables. It’s more, they emphasized the fear of radicalization of the policies applied in the previous two years, a vision that spread skepticism among market agents.

On Sunday 15, with the first results of the legislative elections, in a recorded speech, the president Alberto Fernandez confirmed that in December the program designed by economic team and the points of agreement raised with the IMF staff. This does not mean that the program has the full endorsement of the agency.

“The main point of conflict will be to define the degree of fiscal adjustment, although the head of state was clear on this issue by arguing that there will be no reduction in spending public. Within the ruling coalition they expect the fiscal surplus to come from economic growth. Along these lines, the BCRA also projects that the reactivation will help bridge your imbalances via a recovery in demand for money. However, the action plan of the ruling party is plagued with inconsistencies. Without changes in local regulation, the long-awaited economic growth will remain only an expression of desire. And with this, the possibilities that the Government has to close the current fiscal and monetary imbalances will collapse. This is how the market thinks, and made it clear with the price action of assets after 14-N ”, summarized a report from Nery persichini and Melina eidner, GMA Capital analysts.

Paula gandara, head portfolio manager of AdCap Asset Management, also emphasized that “ dollar bonds continue to be written off in the absence of concrete progress with the IMF ”. He explained that “sovereign bonds in dollars have lost 15% since the September primaries. The news about the election result and the comments about the potential agreement with the IMF were not enough to boost the price of these assets. At this stage of events, after the long and difficult debt restructuring only strong advances will determine the improvement in the prices of these bonds ”.

“Also they bonds prolong adverse weather and that is why they yield on average more than 1% in their quotations in dollars among the main references, with the country risk in the 1,775 basis points, a very high level which clearly reflects the distrust of investors both in reaching an agreement with the IMF and in the subsequent fulfillment of the commitments ”, said the economist Gustavo Ber.

“Attention is focused on the political signals and the presentation of the ‘multi-year economic plan’, since reaching consensus among the main forces would be essential in seeking to move towards an agreement with the IMF. This happens in the middle of cross statements that accentuate mistrust between them, and that’s how the political difficulties in agreeing on a ‘road map’ economic that contributes to a convergence in the accumulated economic imbalances, and then an effective fulfillment of the commitments of said goals, in order to avoid moving towards a crisis ”, said the head of the Ber Study.

The risk country of Argentina played this Monday the 1,776 points and reached a new high since the Government restructured the debt with private creditors 14 months ago.

“Now it is worth thinking about what are the possible solutions that the Government can find for the currency quagmire. The truth is that, as stated by the President of the Nation, Alberto Fernandez, and in consensus with the vice president, Argentina should go find a agreement with the IMF that allows you to renegotiate your maturities and also return to open the doors to international financing, for now from international organizations, “said a report from Invecq Economic Consultant.

Without changes in local regulation, the long-awaited economic growth will remain only an expression of desire (GMA Capital)

“To avoid devaluation, you have to have and earn reserves. It is the most urgent problem, because the Government spent the whole week and did nothing. This inaction it is difficult to understand in a situation that begins to be more and more dramatic“, I consider Miguel Kiguel, director of Econviews.

“To lower the gap, probably the program with the IMF help but I think more is needed, because apart from confidence there is a problem of fear of inflation and the dollar at this time also protects against that, “said Kiguel on the radio. Millennium.

Miguel Kiguel: “In the negotiation of the agreement with the IMF, we are loose of papers”
Another bad day for Argentine stocks, which fell as much as 9% abroad despite the good weather on Wall Street
Bitcoin discounted 14% from its record high and trades below $ 60,000
More pesos and fewer dollars: the four factors that affect the devaluation pressure
To return to the price they had when exiting the default, Argentine debt bonds would have to rise almost 100 percent
Not all news on the site expresses the point of view of the site, but we transmit this news automatically and translate it through programmatic technology on the site and not from a human editor.
Facebook
Messenger
WhatsApp
Twitter
Google+
Posted by Sara Adm In world Last Modified 1 week ago 1 week ago

It’s Jill Biden’s Christmas, but where have all the aesthetic criticisms gone?

“Racism is a very brutal tool”