A few minutes after the news of the death of Hebe de Bonafinipresident of the Mothers of Plaza de Mayo Association, political leaders and organizations from Argentina and abroad began to send their condolences through social networks.

Despite the fact that the referent of Mothers had recently had harsh expressions towards the president and towards his management, she also Alberto Fernandez. He expressed his sorrow for the death of Bonafini with a message on Twitter. Along with a photograph in which he is seen affectionately greeting the head of the Mothers of Plaza de Mayo, the President wrote: “With the departure of Hebe de Bonafini, we lost a tireless fighter. Claiming truth and justice together with the Mothers and Grandmothers, she stopped the genocidal when collective common sense went in another direction. With enormous affection and sincere regret, I bid you farewell. Until always she Hebe ”.

Unusually, the presidential message was received as an “insult” and replicated with zero consideration for the most elementary rules of courtesy: “Mr. President, nothing was lost, the legacy of the Mothers lives on in the town. Linking our President’s struggle with another organization is an insult. Luckily, Hebe went public with everything she thought of you.”. 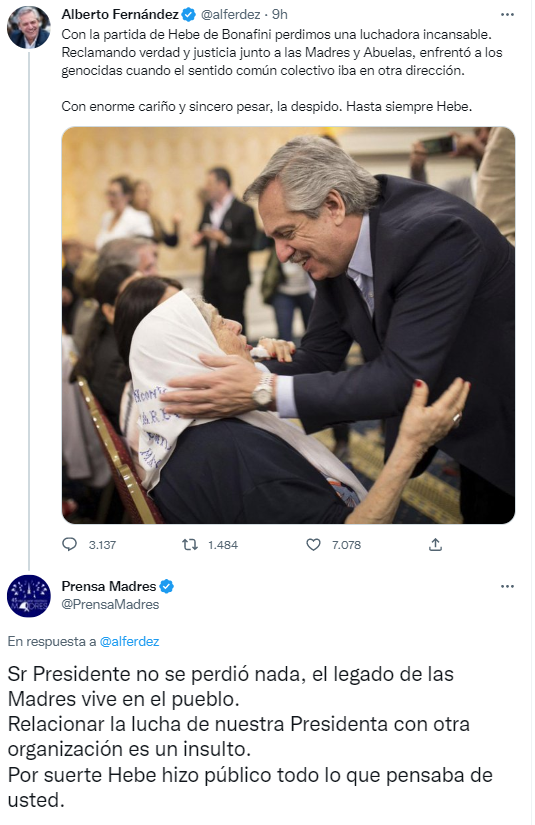 The response of the Mothers to President Alberto Fernández

Obviously, the organization, momentarily headless due to the death of its owner, has been impregnated with the sectarianism and anger that characterized the speech and actions of Hebe de Bonafini in recent years.

For the Mothers NGO, being associated with the “Grandmothers” is equivalent to an insult; surprising, considering that it is an analogous association, twinned in origin and reason for fighting. Impossible to imagine what qualification they would reserve for someone who associates them with an adversary organization.

That someone mourns the “loss” of Bonafini, “tireless fighter”, also seems to be insulting to her successors.

Hebe de Bonafini has passed away but it must be said that the tone of the response of her fellow fighters to the President of the Nation is up to her style. She reflects an intemperance that was very common in the replies of the president of the Mothers of the Plaza de Mayo, particularly towards those who did not enjoy her favor at the time of formulating them.

Until now, Alberto Fernández was the only person to whom the Mothers of Plaza de Mayo responded, despite the fact that there are many and varied referents who expressed their sorrow for the death of Hebe de Bonafini throughout the day.

The vice president, Cristina Kirchner, was the first to fire the leader whom she described as a “world symbol of the fight for Human Rights” and “pride of Argentina.” It is hardly possible to expect a rudeness in this case, since the former president of the Nation and her husband were for Hebe de Bonafini something like beloved children.

During the afternoon, the government also took steps to try to get the National Team to play next Tuesday’s game with a black badge to express mourning for the death of Bonafini. The management would not have found a good echo; among other things, because FIFA prohibits the use of political symbols during the soccer world championship.

The Government asked the AFA that the National Team debut in the World Cup with a black ribbon for the death of Bonafini
Hebe de Bonafini: from the courage with which she confronted the dictatorship to the nonsense and violence of the end
The photo of Hebe de Bonafini in the Judgment of the Boards that inspired a scene from “Argentina, 1985”

Ukraine says it hit Wagner mercenary base in the east

Who is María Elena Álvarez-Buylla, the woman who dreams to replace Delfina Gómez in the SEP