It took seven laps, but we finally have a perfect lap. And it belongs to the hairy man.

In truth, there have been a number of error-free rounds to date – I’ve, uh, been responsible for a few – but all of them were in rounds with matches carried over, so aren’t perfect rounds by technique. Harry is now the first to choose all games scheduled for a single round. Bully for him.

And with the Brumbies’ unbeaten run coming to an end in Brisbane, I’m taking them into said game because I wanted to avoid a unanimous tip line, and The Crowd are following me ambitiously, that means we now have a tie three at the top. That’s where you’d want one, I guess.

Of course, the competition is still young enough this season that it’s not the first time we’ve had a housekeeping situation at the top of the panel, but it’s interesting that the stalemate is back. Last week looked like a week of possible movement, and it turned out to be.

This week could be just as intriguing…

The world is now restored. Command reinstalled. Up is up and down is down again. Dogs in their kennels and wild cats in the woods.

I’m back on top (with some friends).

So the winless, hairless Highlanders attempt to contain the risque and dashing Moana Pasifika. In Dunedin. I should tip the clan. But at 0-6 and trailed by a lackluster fly half, they look like the runt of the Kiwi litter. While Moana is able to bully the win line. I predict the ‘Landers will try to dance with the newcomers and come in second. Moana from a few mitches.

Centrifugal Force should have just enough to send the lawless rebels back empty-handed. Force with a yellow card or two.

The crusaders seem to have found something. Stacked with fullbacks of consequence and feisty forwards (and look at their new young lock with the Irish name: he’s something), the perennial power will give the unlucky Hurricanes some hiding in the Cake Tin, I think.

Chiefs-Blues is the game of the round. I have absolutely no idea. The Blues are slightly the better team, but aren’t as healthy at the moment and have to endure the cowbells. Guess I’ll take the Hamiltonians by a cow. Not a bell.

The Drua will put the Brumbies to work to close the game, with their patented last 20 minutes of hell. But the Brumbies are a professional team with good tools. A win is a win, but by less than ten.

And finally, the Wee Wind on the Pasifika by a half raccoon tail.

If we made all these commentators, full of elderly stars with sore knees, play a real game for 80 minutes under a real referee, they would be the first to want head shots banned. A comfortable and practical sofa that makes fun of “the game becomes soft”. Bend your knees.

It took a while to get there but the Zoolanders will finally get their first victory of the season, against Moana Pasifika.

Which throws us straight into the toughest match of the round to choose from, Perth; does the rule that teams always win after the coach gets his ass kicked apply if it happened on a bye week? The Rebels’ confidence is slowly returning and practice this week has been smooth. I think they can get a second win.

With the Israeli sniper back at the helm, the Hurricanes are doing better than many think. But I switched to the Crusaders a few weeks ago and it was very expensive. The Chiefs vs. the Blues should be the game of the round, but I’ve rolled with the Chiefs all season and I have no reason to get away with it; even with fat Brodie resting his thumb, they’re a pretty good side.

Brumbies on the Drua is a no-brainer, while on Tuesday the Hurricanes have a chance to get revenge on Moana Pasifika and won’t mess things up.

Justice will come to explain, lucidly and logically, how the captain of the Drua, Nemani Nagusa, received an additional week of suspension because of the need for “a means of deterrence for this type of behavior”, as opposed to the fact that no deterrent is required for behavior such as players stealing. in the high-speed breakdown and hitting opponents in the head with their shoulder.

I’m not sure the Zoolanders will get their first win this weekend, actually. I chose them, but without any trust, and only because I don’t trust Moana Pasifika as much as I trust Harry.

(In fact, the cynic in me says the hairy man is playing a longer game here and trying to curry favor with the new boys. I feel a finger in a pie.)

You know how superannuation ads end with the disclaimer, “past performance is no guarantee of future returns”? It’s the Melbourne Rebels in this game. And that’s why the Force must win. Because they need it. 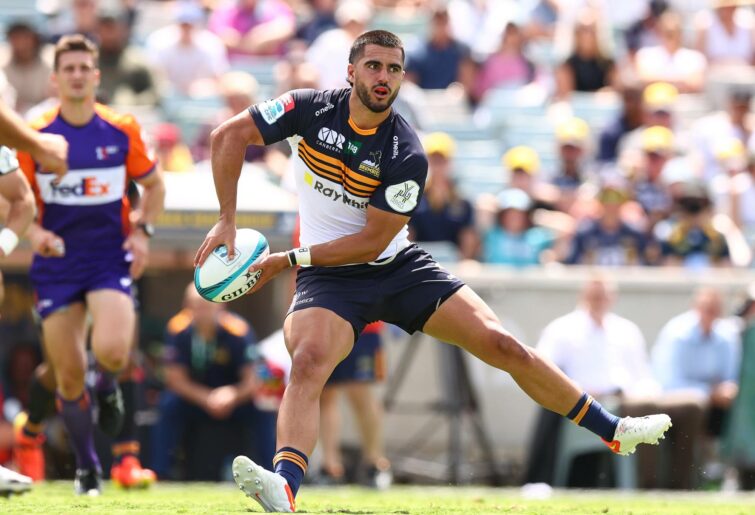 And that leaves the Battle of the Bombays. The Blues have won five in a row, lost one by a point, and none of us picked them. If that doesn’t match their general Blues-ness, nothing will.

Will I reverse this trend and switch against the trend? Surely not.

I will regret that last line at 7 p.m. Saturday night.

Well, I’m rocking as well as my team, slipping way behind the peloton and probably going to keep going, but that’s good, very good.

The Highlanders should put some frustration to bed and earn their first win, and I think the home Force look most likely in what looks like a tough giveaway.

I really want to pick the Hurricanes, but I can’t. The Crusaders should be too good, and I expect more musical chairs behind the Canes’ backs to prove unnecessary again. However, I think they should be able to even the head to head against the brave Moana Pasifika.

Chiefs-Blues in Hamilton form another tricky board, and I really can’t make up my mind one way or the other. I’ll settle for the hometown factor playing its part and plump for the Chiefs, while the Brumbies are expected to be a little too organized for the Drua to really bother them.

Jordie Barrett will hit the post again, Shannon Frizell will continue her calm, low key and consistent form, Solomone Kata will smash someone, Richie Mo’unga will do something ridiculous, Alex Nankivell will again show that he’s probably the most underdog. esteemed of the NZ game, and Tom Robinson will continue to look stunning, even in blue.

Get your votes now – The Crowd’s tips will be revealed on Friday afternoon.

Not all news on the site expresses the point of view of the site, but we transmit this news automatically and translate it through programmatic technology on the site and not from a human editor.
William2022-04-06
Facebook Twitter LinkedIn Pinterest WhatsApp

A hot start from CF Montreal