Shakira shared an emotional video of her presentation at the 2010 World Cup in South Africa on her Instagram account.

Shakira continues to be the focus of all eyes due to her definitive separation with Gerard Piqué, which they signed in the morning hours in the Judicial City of Barcelona and which the Colombian artist attended in mourning, since a good part of her outfits It was made up of black clothing and which, to stand out, used a black overcoat that hung over his hands, revealing the characteristic print of the Burberry firm.

And it is that after their separation, the singer has shared with her followers two important events that have marked her history. The first of those, the millions of reproductions and the recognition that she obtained from her for her most recent single Monotony, considered a hint for Piqué, after the signing. Subsequently, posted on his official Instagram account a TBT (Throwback Thursday) of his presentation at the closing of the World Cup in South Africa in 2010.

It should be remembered that the woman from Barranquilla was the official author of the anthem of this orbital event in which 32 nations met to play the World Cup. Justly, It was in that year that he formalized his relationship with Gerard Piqué after being champion with the Spanish team football, as promised in the recordings of the video for the song Waka waka. 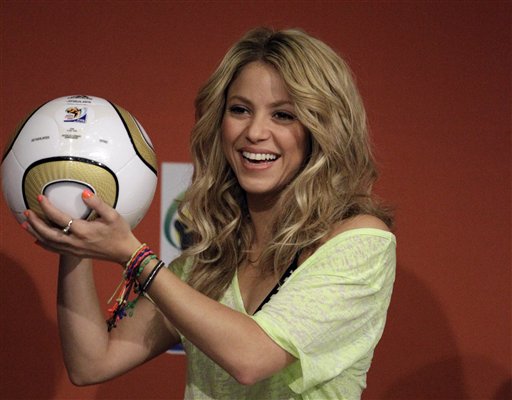 Shakira holds in her hands the ball that was used in the 2010 World Cup in South Africa. (AP Photo/Themba Hadebe)

According to the images, it is seen as an introduction to his presentation that the vuvuzela is formed, which was one of the accessories used by the fans to encourage the players. Subsequently, the Colombian begins the presentation of her with an outfit that consisted of a skirt with fringes that detached from the base with some acid colors, as well as alluding to African culture.

It may interest you: Aida Victoria Merlano revealed her goals for 2023

“Memories of #SouthAfrica2010 #WorldCup #tbt”, It was the text with which the Barranquillera accompanied the publication on her Instagram account, in which she accumulates more than 77 million followers. The clip already exceeds 3.8 million views and has close to 520,000 likes.

The followers of the Barranquillera praised her publications and some have called the artist “the queen of the world cups”, since He has performed three times in a row at the World Cups in Germany 2006, South Africa 2010 and Brazil 2014. Some of the comments that stand out are: “the best world cup song of all time”; “There are not two, you are the queen of the world”; “The best song from a World Cup, after ‘Vive la vida loca’”; “The best is my Shakira”among others.

Next, Shakira’s publication that drove her fans crazy on Instagram:

It is not the first time that the Colombian has shared her presentations at the World Cups she has attended on her social networks, since she revived her presentation in Germany 2006 in a publication that compiled the best of her presentation at that orbital event, where she performed Hips don’t lie – Bamboo accompanied by Wyclef Jean.

“Remembering World Cup Magic (Remembering the magic of the World Cup)”wrote the Colombian in the request for a photo of the publication, in which her followers continue to acclaim her to present herself again and to reach the top where she once was, prior to her relationship with Gerard Piqué.

Not all news on the site expresses the point of view of the site, but we transmit this news automatically and translate it through programmatic technology on the site and not from a human editor.
Sara Adm2022-12-02
188
Facebook Twitter LinkedIn Pinterest WhatsApp