The University of Piura (UDEP) was criticized this Saturday for annulling the trans identity of a journalism graduate who represented Peru at TechCamp, an international event organized by the Bolivian American Chamber of Commerce and the United States Embassy.

With the hashtag #SellamaTomás, several users and students demand on social networks that the university use the name that represents Thomas Ezerskiiportal correspondent Wayka.

In the trans community there is a neologism, ‘deadnaming’, which refers to the practice of calling someone by a “dead name”, either with the intention of offending or due to carelessness. Every time someone asks one trans person what was his name before (or, much worse, what is his “real” name), or when a photo from his stage before the transition is identified with the name he had then, this discriminatory act is being committed. 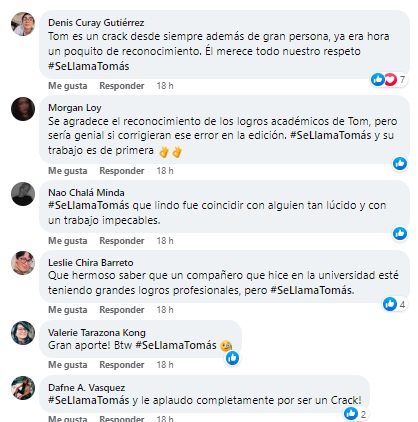 In the post shared by the university with the hashtag #ProudlyUDEP, comments like these can be read: “Tom has always been a crack as well as a great person, it was about time a little bit of recognition. He deserves all our respect #SeLlamaTomás”, “The recognition of Tom’s academic achievements is appreciated, but it would be great if they corrected that error in the edition. # His name is Tomás and his work is first class ”,“ It would be great if respect could edit the note. #SeLlamaTomás”.

Alonso Gurmendi, assistant professor at the Universidad del Pacífico (Peru) and PhD(c) at University College London, also referred to the discriminatory act: “Calling a trans student by a name other than the one with which he identifies is unacceptable.” .

As a teacher I am obliged to call my students by name. There are issues related to attendance, grades and others that occur with the student’s ID registration. You can have your delusions informally with whoever you want, it is your right, in the classroom, NO.

In the University of Piura studied the far-right businessman Rafael López Aliaga, mayor-elect of Lima, who promotes the discourse that seeks to restrict or eliminate public policies in favor of the rights of the LGBTQ+ community.

López Aliaga, who sometimes claims to be tolerant towards homosexuals, denies any possibility of granting the same civil rights to all citizens, such as the case of same-sex marriage, as well as the adoption of children by LGTBIQ+ families.

This year, the TechCamp, held in Cochabamba (Bolivia), addressed disinformation in the digital age. It was held from October 27 to 29 and young people from Bolivia, Peru, Ecuador, Paraguay and Venezuela participated.

The objective of the meeting is to train 60 young journalists, bloggers, technologists and influential people in social networks to combat disinformation online. In the workshop, emphasis was placed on empowering participants to create and spread accurate stories on various platforms, in order to prevent and combat false narratives about local, regional and international issues; conduct data-driven digital activism and enable their communities to tell real and effective stories. 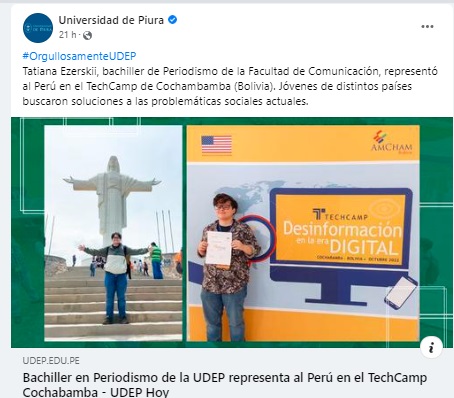 “We were eight people representing Peru at the event. It was great to share the workshops with people from different parts of Latin America, all with different life experiences. We realized that, finally, we all have common roots and that with this type of work we can achieve important transnational changes, ”Ezerskii recounted in the note on his achievement.

The participants developed projects to fight disinformation and strengthened contact networks to promote media initiatives of transparency and storytelling professional in Latin America. The three best projects, which will be announced in the coming weeks, will win seed capital for their execution.

Prisoners have the right to conjugal visits with their partners regardless of gender, says Constitutional Court
UN expert explained that people from the LGBT+ community must be included in the peace and security agenda of each country
The historical forgiveness of Azul Rojas Marín and her powerful speech to the State after 15 years of being outraged and tortured by police officers

Biden: G-7 to ban Russian gold in response to war in Ukraine