Giovanni van Bronckhorst is set for ‘crazy things’ as the transfer deadline approaches but insists no new signings are imminent at Rangers.

The Ibrox side have signed seven new first-team players so far, including Antonio Colak, Malik Tillman and Rabbi Matondo.

Van Bronckhorst is happy with the strength of the team he has built, but he knows things could still change before September 1.

“You’re never sure, especially when you get to the later stages of the window, crazy things will happen,” he said. Sky Sports News.

“We’ve seen this before and it’s important to be prepared, but so far nothing is happening with the ins and outs.”

Colak has been preferred over Alfredo Morelos this season, with the striker starting every game in the Scottish Premiership and Champions League qualifiers.

The 28-year-old has four goals so far and Van Bronckhorst is impressed with his immediate impact.

“He gives us important goals, you always expect that from your strikers and he does that so I’m really happy with his performance,” he added.

“We have a lot of different strengths and qualities up front and when the competition is high I think the level also increases.

“That’s what you want when you play for big clubs and I think we’ve achieved that with the team we have this season. 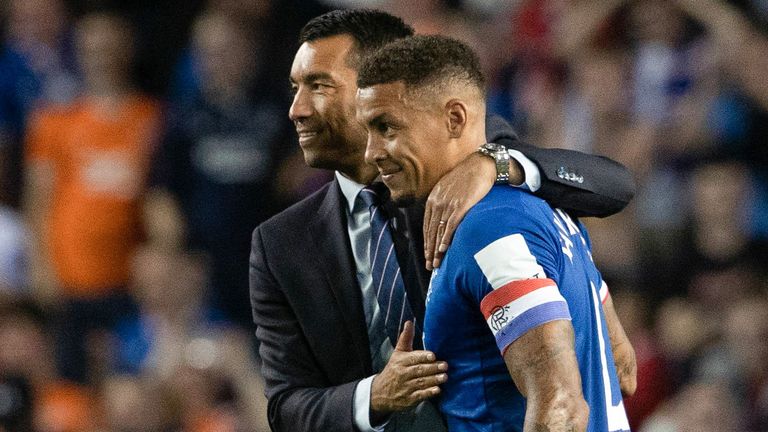 As contract talks continue with Ryan Kent and Morelos, captain James Tavernier has signed a new contract with Ibrox.

The 30-year-old joined the club in the Championship in 2015 and has made 353 appearances so far, scoring 85 goals from right-back.

Van Bronckhorst said: “We all see what he brings to the team.

“He’s our captain and he’s leading by example, so I’m really happy he extended his contract.”

“It’s a period we are used to with big league games between European matches,” said Van Bronckhorst.

“I think we have a good team to face these games so we will be ready. You always have to make sure you see how the players are doing physically and mentally and take the XI from that position.

“We have seen the first games they have [Hibs] played in the league, so we have a pretty good idea of ​​their style, so we’ll prepare normally and make sure we’re ready for whatever they throw at us.”

‘Different sauce’ – Arsenal legend Dennis Bergkamp has been hailed as the biggest Dutch star to play in the Premier League ahead of Virgil van Dijk, Jaap Stam and Arjen Robben