Rangers showed no Old Firm hangover as they closed the gap at the top of the Scottish Premiership to one point with a dominating win over Hearts at Ibrox.

Alfredo Morelos was back in the starting XI after international duty and had the Ibrox side ahead after just 11 minutes, firing in Ryan Kent’s cross.

The Colombian striker added a second after halftime by curling in a left-footed shot from the edge of the box.

Rangers were rampant and limited Hearts to a few chances on goal.

Glen Kamara made it 3-0 just minutes after entering the pitch, with Scott Arfield and Fashion Sakala also scoring a mad ten-minute spell.

The result sees Rangers close the gap at the top of the Scottish Premiership to one point after Celtic beat Motherwell earlier today.

Giovanni Van Bronckhorst’s side came under heavy criticism after their midweek capitulation to Celtic and the Dutchman made four changes with Morelos, defender Leon Balogun and midfielder John Lundstram alongside the playmaker gamer Ryan Jack, who made his first start since February 2021. 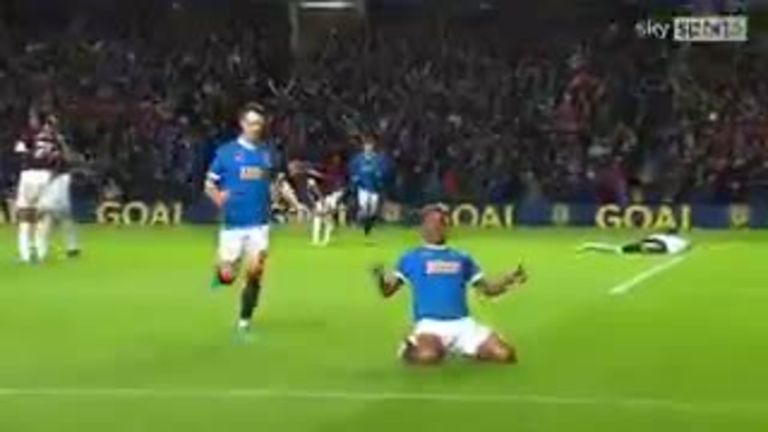 Morelos wraps in his second

Hearts defender John Souttar, who has signed a pre-contract with Rangers which will see him move to Ibrox this summer, has not even been named among the replacements as Aaron McEneff and Alex Cochrane replaced Ellis Simms and Andy Halliday.

McEneff made an early impact, blocking Joe Aribo’s header in the first minute from a James Tavernier corner and, after Balogun headed the second corner over the bar, he robbed Gers defender Calvin Bassey then drove right by the target on the other end.

Man of the match: Alfredo Morelos

However, the Colombian was not to be denied a second time as he hit a cutback from Kent, who ran on a defensive pass from Bassey.

The home side had the upper hand and in the 24th minute a wonderful move with Morelos and Kent ended with the latter curling another shot to the far post. 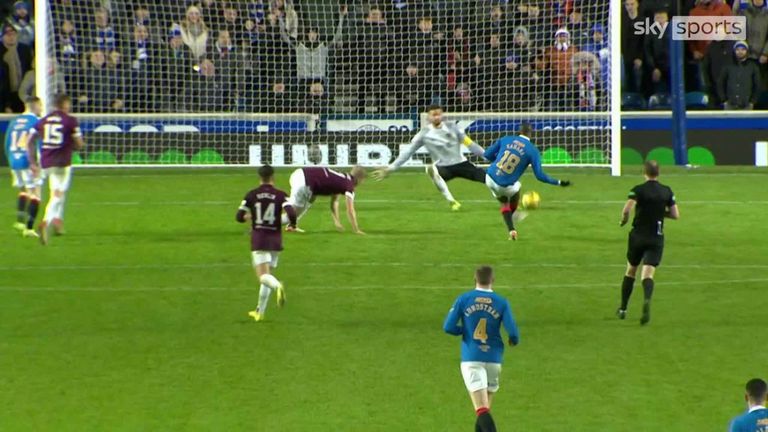 Rangers fans screamed for a 35th-minute penalty when Nathaniel Atkinson appeared to have grabbed Kent’s shirt inside the box, but referee Willie Collum was unimpressed.

Gordon saved Morelos’ effort from the edge of the box to finish the action in the first half and, after Simms was introduced in place of McEneff early in the second half, the visitors missed two quick chances to equalise.

Atkinson came in behind Bassey to send a cross from Stephen Kingsley beyond the post and then, when the Rangers left-back was short with a header pass to Allan McGregor, Jambos midfielder Cammy Devlin launched the ball away from the target. 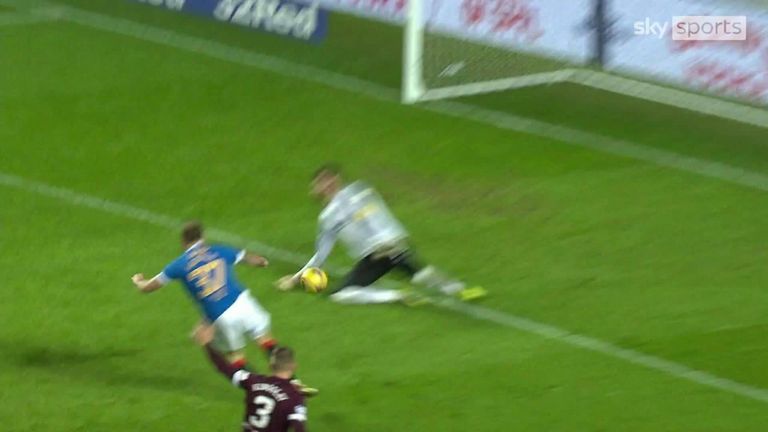 As the game grew increasingly temperamental, Jambos boss Robbie Neilson was booked by Collum, likely over something he told fourth official Andrew Dallas.

Morelos’ second goal came when he tried to play Scott Arfield but his pass interrupted Kingsley and came back his way and from the edge of the box he curled the ball past Gordon and into the corner the farther from the net.

Moments later, the Ibrox striker had a chance for a hat-trick as he smashed through the Gorgie defense but charged right into Gordon before McGregor denied Barrie McKay at the other end. 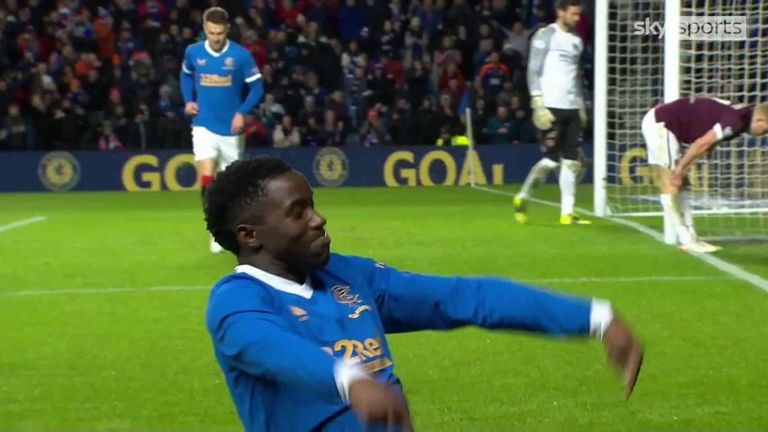 In the 71st minute, Morelos took a pass from Aribo and moved it to Kamara, in place of Jack, and he took off on the wrong foot chasing Alex Cochrane before blasting the ball past Gordon.

Arfield then hammered in a fourth from 16 yards out in the 74th minute before deadline-day loan signing Aaron Ramsey from Juventus replaced him on his Rangers debut, with Sakala also replacing Aribo and the striker converted a pass from Kent in the 84th minute to seal a convincing performance.

man of the match

The striker has shown Rangers exactly what they’ve been missing in recent games.

He returned from international duty with two goals and was involved in the other three as the Ibrox side went wild against Hearts.

What the managers said 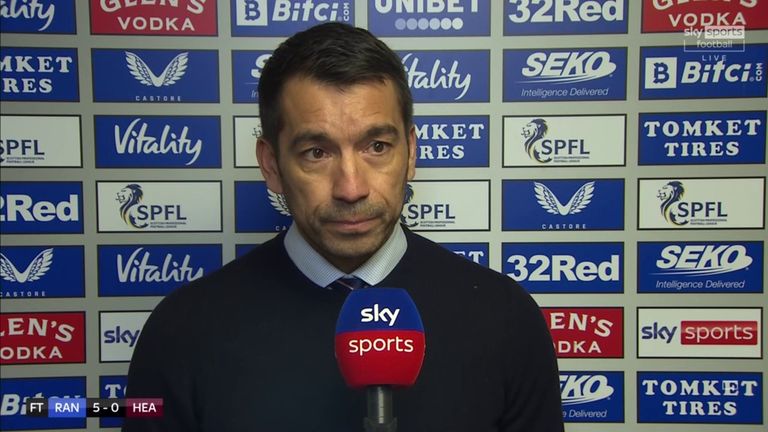 Giovanni van Bronckhorst was delighted with the way his side responded to their loss to Old Firm by beating Hearts 5-0, but the Rangers boss said his side need to perform every week to stay in the title hunt.

“It’s a big win for us, especially the way we won today and the attitude we showed from the first minute.

“It’s a good reaction and I’m really happy that we won this game.

“We know his qualities (Alfredo Morelos) and what he can bring to the team, a lot of threat up front. We knew he was going to give us a bit more in attack to give us more threat and he showed it today.

“The key is to keep performing game in, game out. If we keep that energy and that determination in every game, we’ll have a good chance.” 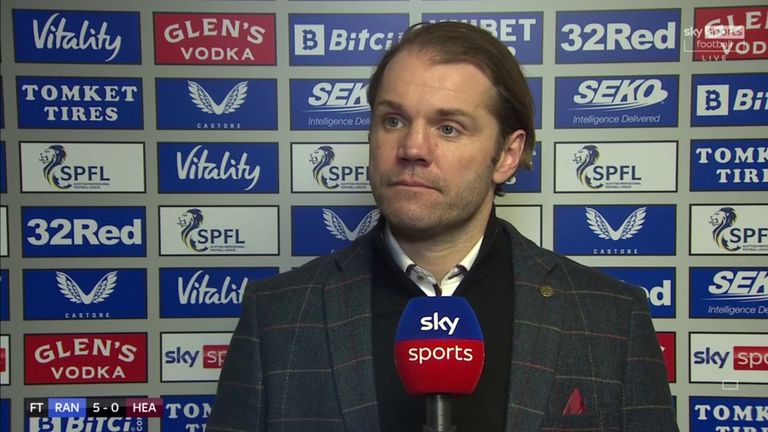 Hearts manager Robbie Neilson says his side had some good chances they didn’t take to beat Rangers, and that’s the difference between his team and the best sides.

“We lost the second goal and just seemed to capitulate, that shows you where we are at the moment.

“We are a good team, a very good team, but to get to this level we have to improve.

“Disappointing day but the only way to fix it is to win on Wednesday night.”

Rangers are back at home on Wednesday night against Hibernian. Hearts take on Dundee at Tynecastle on the same night.

Not all news on the site expresses the point of view of the site, but we transmit this news automatically and translate it through programmatic technology on the site and not from a human editor.
Eleon2022-02-06
Facebook Twitter LinkedIn Pinterest WhatsApp