The Commonwealth bantamweight title belt has pride of place in Kristen Fraser’s living room in Aberdeen but she’s frustrated she hasn’t got a world title by now.

After battling back to fitness after a knee injury, Fraser had a fight lined up for February that got cancelled, and then another one scheduled for March – only to see the pandemic scupper that plan.

Lockdown restrictions eased over the summer, but not by enough. “I felt I was really coming back into it. We’d managed to line up an opportunity for me to fight for a world title in July,” she tells Sky Sports. “Obviously that couldn’t go ahead either. COVID has really ruined my fun.”

However, she’s looking on the bright side. Since making Scottish sports history two years ago – her bantamweight win over Ellen Simwaka was the first for a Scottish woman boxer at Commonwealth title level – she’s become a mum to Robyn alongside her wife Kirsty, and she’s kept working throughout. “I still have a job and an income, and I have a family I can provide for. There are much worse things in life that could have happened. Now I’m just looking to get back out there.” 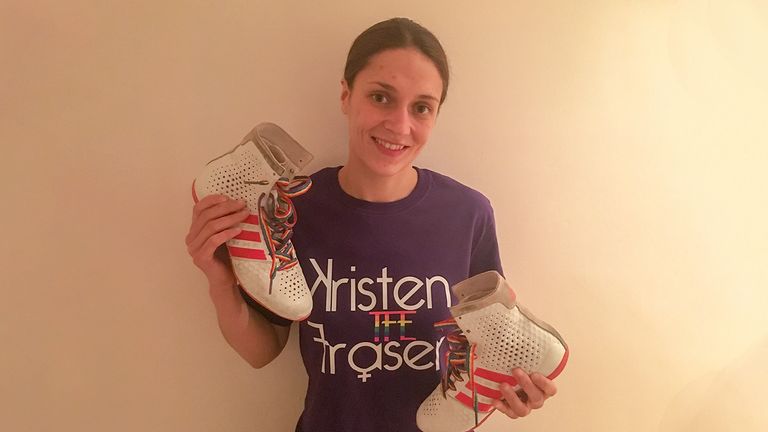 It takes time to change prejudice and assumptions but particularly in sport, Rainbow Laces go a long way to do that.

She watched with great interest and no little envy when Rachel Ball claimed the interim WBC super-bantamweight belt at Wembley a fortnight ago.

“I believe that I’m a strong competitor at that level and had it not been for lockdown, I would have got an opportunity to prove that,” says Fraser.

“I have a lot of respect for the women who have been fighting on the Matchroom bills. It’s been awesome boxing – and Rachel Ball’s a great domestic fighter.

“But I definitely think I’m up there at that level. It’s just about getting the opportunity at the right time with the right notice period, and I’m there.”

Also fighting on that same bill as Ball was Terri Harper, defending her WBC super-featherweight title. For both Fraser and Harper, their achievements in the ring can partly be attributed to authenticity, and they have sent that message out through boxing with powerful visibility too.

Fraser wore rainbow laces in her boots when defeating Simwaka and spoke to Sky Sports and other outlets about why LGBT+ inclusion in sport is so important to her. Similarly, Harper has described the strength she draws from her fiancee Jen, and the Doncaster fighter’s walk-on at the SSE Arena was accompanied by a giant-screen rainbow flag backdrop.

“Fair game to Terri, she’s got this big platform and she’s using it,” says Fraser. “She’s also giving commercial space on her shorts to Stonewall, when that would otherwise be for sponsorship. That’s really positive. Visibility is progress and Terri doing that is fantastic for the LGBT+ community – if it becomes a talking point, then it increases awareness.

“Some boxers maybe don’t come across in the best light when they talk but Terri is someone who’s very much done it off her own merit by being her authentic self.”

‘I’m more of a lover than a fighter sometimes’

Talking points are taken on with great confidence by Fraser. She’s particularly pleased to see the new designs of Rainbow Laces in different Pride flag colours this year. “I think the variations of laces are really positive, including different aspects of the community.

“It’s important just to have that conversation in sport. There are people who come into a gym who are LGBTQI and they may not feel comfortable. It’s about being open and saying, ‘you’re welcome in this environment’.

“It takes time to change prejudice and assumptions but particularly in sport, Rainbow Laces go a long way to do that. People ask me about it all the time if they haven’t seen them before in my shoes.”

The campaign activation this year arrives at a time when many gyms, sports clubs and groups are preparing to reconvene after the second lockdown. For some, those communities have been kept alive virtually with Zoom calls and WhatsApp chats which inevitably involve more about life off the pitch or outside the ring than might otherwise be the case.

Fraser says she has always found boxing gyms to be truly inclusive spaces but she knows not every sport can say the same for its environment. She stresses the need for more dialogue and sensitivity. “It’s a great time to show our support for the people that we care for. There must be so many people out there who play in sports teams where none of their team-mates know that they’re gay, or trans, or bisexual,

“You don’t have to say, ‘oh but I’m not homophobic’ or ‘I don’t care’. Just wearing rainbow laces or supporting the campaign is a way of showing solidarity, and saying ‘you know what, it’s OK to be yourself’.

“Particularly in a competitive environment, you spend so many hours and days with each other training, sometimes you just need to be the person to say something. Rainbow Laces is a small statement to do that.”

Fraser was recently the subject of a documentary film titled The Boxer, that charted her path to success as Scotland’s first female professional in the sport and how she juggled a career in the oil industry, her home life with Kirsty, the arrival of Robyn, and the intense pressure of the fight game. It brought additional exposure to the family unit but she describes it as “a great experience”.

“I think it was a fair reflection of me as a person and I’ve had really positive reactions to it,” she says. “And I’ve had very few trolls. In any case, I find social media sort of filters those people out into a different inbox so you don’t have to look at them if you don’t want to, so that’s quite helpful!

“A lot of people would have never encountered an LGBT family before – Kirsty just got more and more pregnant and her hair got longer and longer throughout the whole thing! Hopefully it will raise a bit more awareness there as well.”

In one particularly moving scene in the documentary, Fraser and her wife discuss their strong faith and how when they sensed an increasing mood of homophobia at the church she had attended with family since childhood, they changed churches in order to be part of a welcoming congregation across Aberdeen.

As mums, they are even more conscious of ensuring children are given positive signals about LGBT+ inclusion, including through sport. “It took me until I was way beyond school to come out and it’s not that I didn’t know I was gay, because I very much did,” says Fraser.

“For me, I almost felt most comfortable doing sport – I didn’t shy away from it. But that’s not representative of the experience that boys at school who are gay might have. They might feel completely different.” She expresses sadness and disappointment at the recent news that the Government has chosen not to continue with funding for specific projects tackling bullying of LGBT+ pupils.

Few British athletes are as invested in speaking out against inequality as Fraser. Why does she think that is? “LGBTQ issues are something that I genuinely care about. I think it’s so important that young people are supported and are heard, and that if you’re struggling for whatever reason – you feel like you can’t come out, or you feel you’re not welcome in the environment that you’re in – that there is a community there for you.

“Sport has given me an opportunity to speak about these things, much to the disappointment of some people who say stuff like, ‘do you not just want to smash them?’ But I’m more of a lover than a fighter sometimes.”

Her passion for boxing certainly hasn’t been dampened in any way by the pandemic. She fancies a bout against Rachel Ball. “100 per cent. Once I was active, I’d actually rank above her in the chain but Rachel has very much earned an opportunity to shine on that platform.

“I think she’s a really good boxer – but I know I can beat her.”

Sky Sports is a member of TeamPride which supports Stonewall’s Rainbow Laces campaign. If you’d like to help inspire others in sport by sharing your own story of being LGBT+ or an ally, please contact us here.

Preparing for cyberstrike on Russia, US faces hacking by China