“I believe in Colin Kaepernick. He deserves every chance in the world to be a quarterback in the National Football League. I still stand by that. If our coaches and our general manager want to bring him in or want him to be quarterback on this team, I would welcome him with open arms,” exclaimed Davis.

Davis’ comments follow Kaepernick’s admission that he would take a backup quarterback job to get the NFL back in the door.

The Raiders owner also praised Kaepernick for his consistent attacks on the police and his proclamations that America is irredeemably racist.

“In the same vein, Colin Kaepernick sacrificed a lot of things he could have done in his life to get a message out about police brutality, fairness and inclusion in America,” Davis told Poole. “I’m sticking to that.” 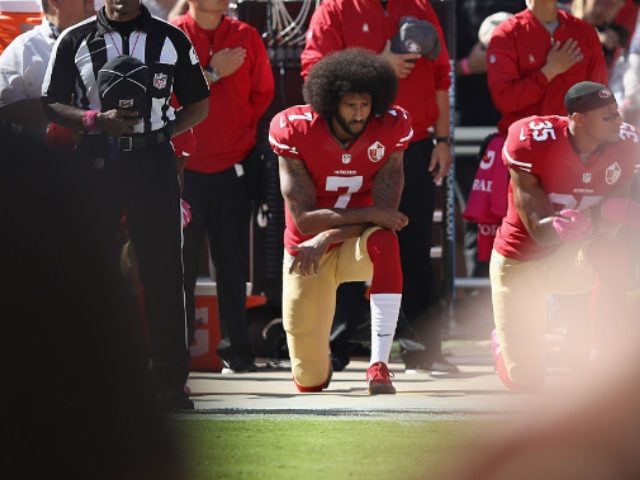 Davis also insisted that over time he “learned” more about the subject of Kaepernick’s protests.

“I think Colin is a very misunderstood human being,” Davis explained. “I had the opportunity to speak to him. I never really knew Colin and didn’t understand him. I didn’t understand kneeling, what it meant initially. Over time, I learned a little more. ”

“I understand where he came from. It has a message for society as a whole,” Davis said.

Of course, it is historical revisionism to say that Kaepernick spoke only of inequalities.

In 2016, for example, Kaepernick said quite bluntly that he couldn’t defend the American flag. His protest was a direct attack on the flag and the country, and he said it in his own words in August 2016.

“I’m not going to stand up to show flag pride for a country that oppresses black people and people of color. To me, it’s bigger than football, and it would be selfish of me to look the other way. There are bodies on the street and people getting paid time off and getting away with murder,” Kaepernick said.

Kaepernick gave other clues about the nature of his protests in 2016. For example, he wore a shirt praising Cuban dictator Fidel Castro, a mass murderer and self-proclaimed enemy of America. Kaepernick also showed that he was not content to protest the few police officers who behaved badly when he wore socks that portrayed all the police officers as pigs.

Additionally, in 2016, Kaepernick said the United States had never been great, noting that he stood up against the whole country in general, not just for “social justice,” with his protests. against the anthem.

The former NFL player also protested the flag when he forced Nike to drop its Betsy Ross flag shoes in 2019. Nike announced plans to release a patriotic Betsy Ross flag-themed sneaker until until Kaepernick shells the anti-American. left to attack Nike for the proposal. In one of her attacks on Nike, Kaepernick even claimed that Betsy Ross’ American flag was a “symbol of slavery.”

Colin Kaepernick compares the NFL’s jumpsuit, which allows all players of all races a voluntary chance to become multi-millionaires, to slavery. Anyone still defending this fool has no functioning brain. pic.twitter.com/rMaKi7c6xh

Finally, Kaepernick would be playing professional football right now if he hadn’t turned down every opportunity given to him.

Kaepernick turned down an offer from the San Francisco 49ers to stay on the team in 2017 because he wanted more money. He also turned down several opportunities afterwards, not to mention his act of making a circus out of the NFL coaching offer in 2019.

Not all news on the site expresses the point of view of the site, but we transmit this news automatically and translate it through programmatic technology on the site and not from a human editor.
William2022-04-28
190
Facebook Twitter LinkedIn Pinterest WhatsApp