The attack on the Grupo Clarín building generated widespread rejection that initially came from opposition leaders, later joined by leaders of the national government and La Cámpora.

“I want to express our condemnation of the episode that occurred in front of the Clarín newspaper headquarters. Violence always alters democratic coexistence. We hope that the facts will be clarified and the perpetrators will be identified from the ongoing investigation.”, The president posted on social networks Alberto Fernandez.

I want to express our condemnation of the episode that occurred in front of the Clarín newspaper headquarters. Violence always alters democratic coexistence.

We hope that the facts will be clarified and the perpetrators will be identified from the ongoing investigation.

In the same vein it was expressed The field, in a message that was shared by Vice President Cristina Kirchner: “Democratic coexistence, which is severely affected by the promotion of hate speech, must be taken care of by all Argentines. For this reason, we repudiate and firmly condemn the attack perpetrated by hooded men against the Grupo Clarín headquarters, recorded by a video on the night of Monday, November 22 at 11 p.m., according to the company itself, in the heart of the City of Buenos Aires.

In its message, the Kirchnerist organization took the opportunity to recall an episode of violence against the ruling party: “In May of this year, the headquarters of the Frente de Todos in Bahía Blanca suffered an attack with an explosive device, affecting neighboring buildings. There is no audiovisual record. 183 days have passed, there is no progress in the case and the incident remains unpunished ”.

Democratic coexistence, which is severely affected by the promotion of hate speech, must be taken care of by all Argentines.

The first national official to express his condemnation was the Minister of Security, Aníbal Fernández: “I condemn the attack on the Clarín Group at the headquarters on Piedras Street, with Molotov cocktails, which occurred on Monday night, where at least nine hooded people threw explosives to offices. I trust the perpetrators will be identified and punished “.

After the news was released on the newspaper’s website, the journalists who work there immediately came out to condemn the events and then former officials, opposition politicians and legislators echoed.

From his role as president of the UCR at the national level, the deputy Alfredo Cornejo He also asked for an early clarification of the fact and expressed his solidarity with the workers of that medium

Like him, and as president of the ARI Civic Coalition, the deputy Maxi Ferrari He said that the attack on Clarín “is extremely worrying” and strongly condemned it. “Speeches of hate, intolerance and violence end up taking shape in these events that deserve all our rejection,” he declared.

For his part, the Cordovan deputy Mario Negri, president of Bloque UCR and Interbloque Juntos por el Cambio, tweeted: “The Government must pacify society and provide security to citizens and companies. It is impossible to forget that members of the ruling party have been promoting this anti-media crusade. My solidarity with @clarincom”.

The leader of Cambiemos Adrian PerezMeanwhile, he offered his solidarity towards journalists, “whom this attack aims to intimidate.” And he recalled that “freedom of expression is one of the fundamental pillars in a democratic Republic and must always be defended.”

Faced with what happened, the former Macrista Minister of Culture, Pablo Avelluto, asked that the violence not go unpunished. “We Argentines already carry a long history of pain and death so that a small group of hired idiots intends to return to terrorism. #NOALAVIOLENCE”He tweeted.

Other former officials of the previous government who came out to support Grupo Clarín after what happened were Hernan Lombardi, who served until 2019 as Media Secretary, and Claudio Avruj, in charge of the Human Rights area. 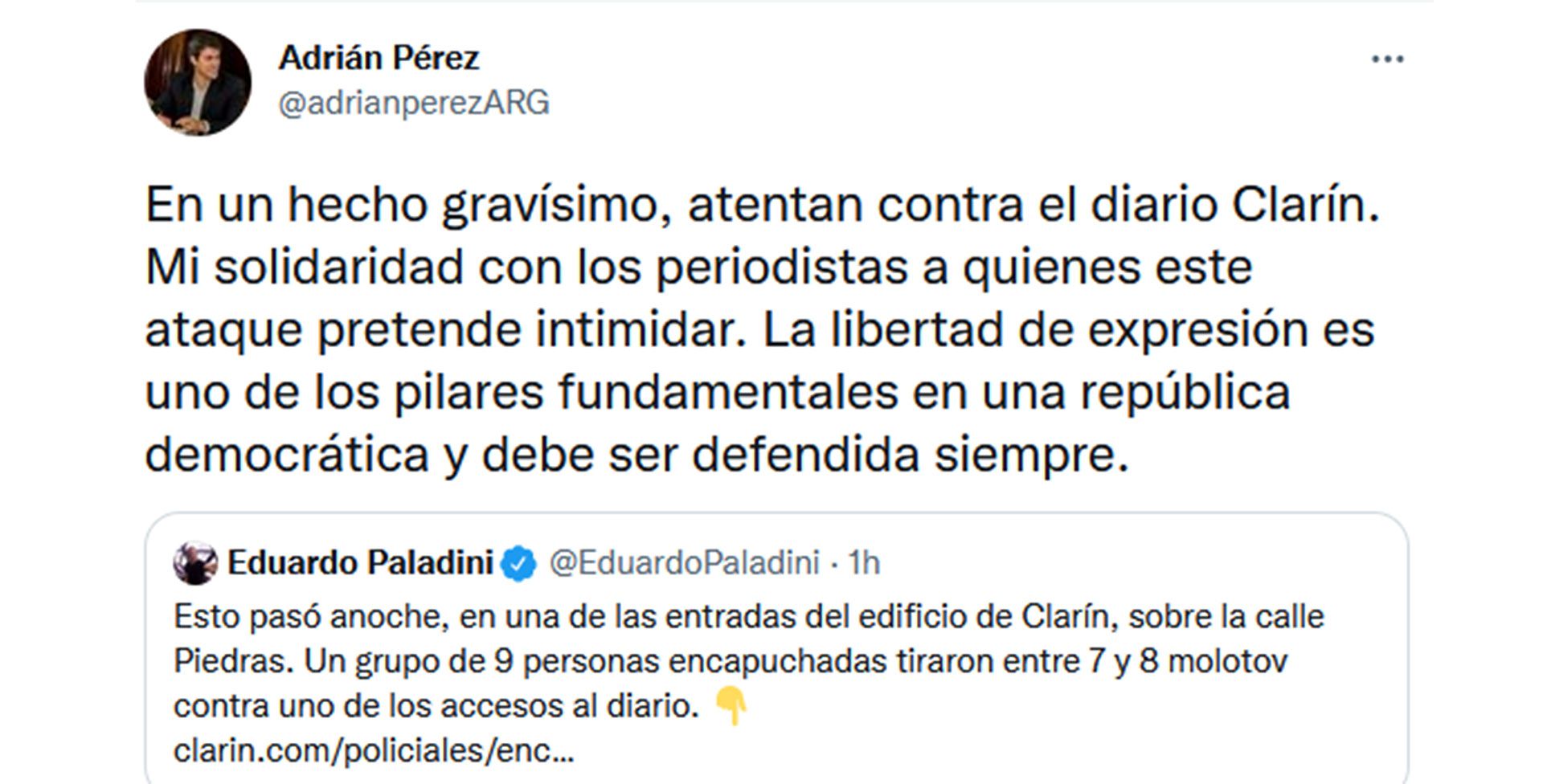 “All solidarity with Clarín. Freedom of expression is a basic pillar of our coexistence and of our democracy, ”Lombardi wrote on his networks. While Avruj recalled the latest violent events in Argentina. “Institutional violence in Barracas and San Clemente; Rosary under fire daily, @clarincom victim of intimidation with Molotov cocktails, the south at the mercy of Mapuche aggression. Serious symptoms of our serious social deterioration that are not treated in time “, he warned.

The attack on the Clarín newspaper building occurred this Monday at 11:05 p.m. and the entire sequence was recorded by a security camera.

There it is observed that the attackers are walking along Piedras Street and when they arrive at the building they light and throw 9 Molotov cocktails against its facade.

The artifacts, which hit the sidewalk and the door of the entrance hall to the Clarín building, caused a fire that was perfectly credited by the filming.

The attackers, after dropping the bombs, fled through Ituzaingó street to Peru.

According to the newspaper’s website, there were no injuries or material damage. Only the stains of the fuel used and the traces of the fire that were extinguished without the intervention of the firefighters remained on the sidewalk, who arrived at the scene at 11:15 p.m. when everything was under control.

The case was left in the hands of Federal Court No. 9, in charge of Judge Luis Rodríguez, who classified what happened as public intimidation.

Not all news on the site expresses the point of view of the site, but we transmit this news automatically and translate it through programmatic technology on the site and not from a human editor.
Facebook
Messenger
WhatsApp
Twitter
Google+
Posted by Sara Adm In world Last Modified 5 days ago 5 days ago

Man donates bikes to police for children in need

Omicron: What we know and don’t know about the new COVID variant

“Nobody knows the territory better than we do”: the stories of women victims of the conflict that are part of the Territorial Model of Guarantees