ROME — Pope Francis has accused those resisting his sweeping restrictions on the traditional Latin Mass of diabolical divisiveness in the Church.

Liturgical life “must lead to greater ecclesial unity, not division,” the pontiff told faculty and students at the Pontifical Liturgical Institute on Saturday. “When the liturgical life is a kind of standard of division, there is the smell of the devil, the deceiver.”

“It is not possible to adore God and at the same time to make the liturgy a battlefield for questions that are not essential, even outdated questions and to take a stand, starting with the liturgy, with ideologies that divide the Church,” he said. insisted.

“Indeed, these closed mentalities use liturgical schemas to defend their point of view”, he said, and this is “the drama that we live in the ecclesial groups which move away from the Church, they challenge the Council and the authority of the bishops to preserve tradition.

Monsignor Ignacio Barreiro Carambula celebrates the Tridentine Mass in Latin at the Church of St. Giuseppe a Capo le Case in Rome, Italy, in July 2007. (ALBERTO PIZZOLI/AFP via Getty Images)

In July 2021, Francis repealed the inclusive measures of his predecessors, Pope John Paul II and Pope Benedict XVI, which allowed for greater flexibility and diversity in the Catholic liturgy.

In his apostolic letter entitled Traditional custodians (“Guardians of Tradition”), the pope banned the celebration of the traditional Latin Mass – sometimes called the “Tridentine” Mass, in reference to the 16th-century Council of Trent – ​​in Catholic parishes and lifted existing accommodations for priests who want to use the extraordinary form of the Catholic liturgy.

The letter reversed measures to relax restrictions on the use of the traditional form by Pope Benedict XVI, who in 2007 noted that many faithful continued to be attached with “love and affection to earlier liturgical forms that had deeply shaped their culture and spirit.

In recognition of this diversity, Pope John Paul II had sought greater inclusion by granting the faculty to use the old form and “urged bishops to make wide and generous use of this faculty on behalf of all faithful who were looking for her,” wrote Benedict XVI.

Benedict XVI established that the Roman Missal promulgated by Pope Paul VI “is the ordinary expression of the lex orandi (rule of prayer) of the Latin Rite Catholic Church”, whereas the Roman Missal promulgated by Saint Pius V “must nevertheless be considered as an extraordinary expression of the same lex orandi of the Church and duly honored for its venerable and ancient use.

“What previous generations considered sacred, remains sacred and great for us too, and it cannot suddenly be entirely forbidden or even considered harmful,” Benedict XVI explained. “It is up to all of us to preserve the riches that have developed in the faith and prayer of the Church and to give them their rightful place.

Pope Benedict had granted broad faculties to Catholic priests who wished to say Masses privately using the Roman Missal published in 1962, stating that to do so “the priest does not need permission from the Apostolic See or from his own Ordinary”. 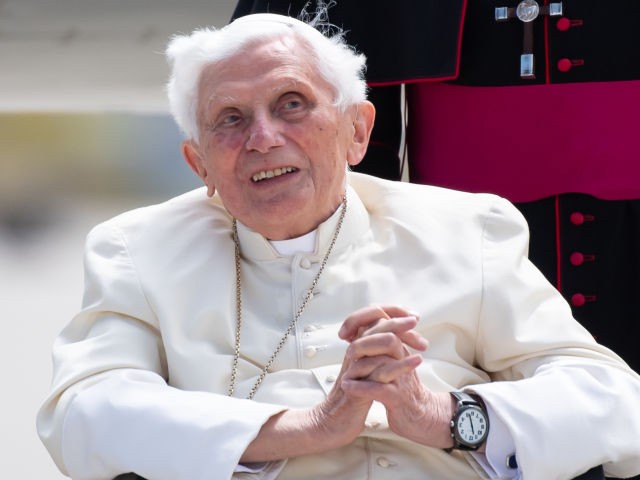 Pope Benedict XVI, also known as Pope Emeritus, poses for a photo at the airport in Munich, Germany, in 2020. Benedict eased restrictions on the use of the traditional Latin Mass in 2007. ( SVEN HOPPE/POOL/AFP via Getty Images)

According to Francis’ restrictions, priests who wish to celebrate using the 1962 Roman Missal “should submit a formal request to the diocesan bishop who will consult with the Apostolic See before granting such permission.”

The Vatican’s own website states that “by current standards, the Latin language still occupies the preponderant place as the language which, as a matter of principle, the Church prefers, even though it recognizes that the vernacular can be useful to the faithful” .

The Vatican goes on to note that “Latin must be safeguarded as a precious heritage of Western liturgical tradition.”

The Code of Canon Law, which governs the activity and liturgy of the Church, similarly stipulates: “The Eucharistic celebration must be celebrated in the Latin language or in another language provided that the liturgical texts have been legitimately approved.

Saint John Paul II urged the continued use of Latin in the Church to maintain links with its own history and traditions.

“The Roman Church has special obligations towards Latin, the splendid language of ancient Rome,” he writes, adding that “she must manifest them whenever the occasion presents itself.”

Pope Francis justified the reversal of his predecessors’ more inclusive approach by insisting that their pastoral benevolence “was exploited to widen gaps, reinforce differences and encourage disagreements that hurt the Church, stand in its way and expose it to the peril of division.”

The pope’s abolition of the traditional Latin Mass was welcomed by progressives and hotly opposed by conservatives, including at least three prominent cardinals.

Cardinal Gerhard Müller, for example, the former head of the Vatican’s doctrinal office (CDF), chastised Pope Francis for his selective crackdown on the traditional Latin Mass while allowing progressives to reject fundamental tenets of the faith in complete safety. impunity.

Pope Francis has “significantly restricted” the celebration of the Mass in Latin with the clear intention of “dooming the extraordinary form to long-term extinction,” Müller observed.

By punishing the conservative peripheries, Francis “ignores the religious feelings of the (often young) participants in Masses according to the Missal of John XXIII” without “the slightest empathy,” he writes.

“Instead of enjoying the smell of the sheep, the shepherd here hits them hard with his crook,” Müller said, alluding to one of Francis’ favorite sayings.

The fearsome Cardinal Joseph Zen, former bishop of Hong Kong, insisted the measures were unreasonably harsh and hurt “the hearts of many good people”.

The pope’s letter “considers the very existence of a parallel rite an evil,” Zen said, and reflects wishes “for the death of the [traditional] groups.” 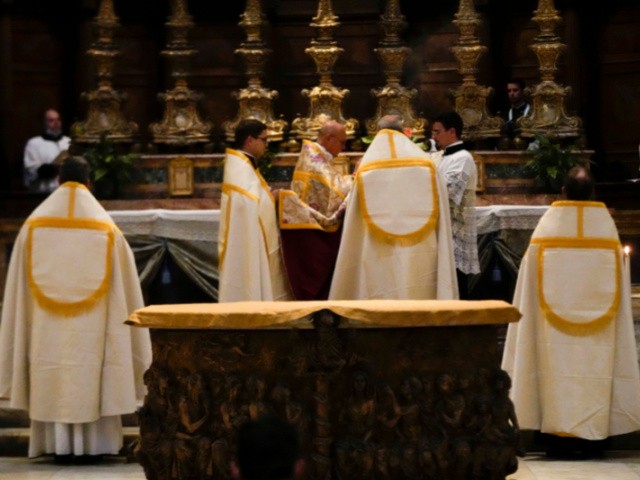 A priest celebrant leads a mass in Latin at the ancient Basilica of the Pantheon in Rome, Italy, Friday, Oct. 29, 2021. (AP Photo/Luca Bruno)

Those attached to the traditional Latin Mass “are deeply discouraged by the severity of the discipline” imposed by Pope Francis in his letter and “offended by the language he uses to describe them, their attitudes and their conduct”, said writes Burke.

“It is apparent from the severity of the document,” Burke said, that Pope Francis issued it “to address what he perceives to be a grave evil threatening the unity of the Church.”

The Pope’s message to “devout believers who have a deep appreciation and attachment” to the traditional Latin Mass is that “they suffer from an aberration which may be tolerated for a time but must ultimately be eradicated,” Burke said. .

Not all news on the site expresses the point of view of the site, but we transmit this news automatically and translate it through programmatic technology on the site and not from a human editor.
William2022-05-08
Facebook Twitter LinkedIn Pinterest WhatsApp

CA Serial Killer: Who is Wesley Brownlee? What we know about the alleged suspect behind the murders in Stockton, Oakland