Courage, grit, perseverance and above all a lot of concentration, were the perfect ingredients for Diego Florescan be crowned as the new pan american champion Chess Under-20. This important competition was held from August 22 to 28 in Pereira, Colombia, where at his short 16 years, he defeated world-class players, including the American Lu Maximillian, who was the favorite of the contest.

It must be recognized that Diego also had to beat opponents much older than him and from countries considered world powers in sports science, such as the representatives of United States, Colombia, Venezuela, Costa Rica, Mexico, Panama, among others.

However, his desire to win and, above all, his great talent, made Flores surpass Lu Maximillian, the youngest master in the history of American chess, a title he achieved at 9 years and 11 months of age.

A merit that cannot be ignored is that Diego, won the contest undefeated against difficult rivals and once again occupied first place in the youth category in the Americas.

“It has been a tough competition, in which more than six countries and several qualified chess players have participated. I am happy to have achieved an excellent score and remain undefeated, climbing more than 60 points of ELO and thus being able to return to be in the top 1 youth, by a long difference”, said the talented chess player after finishing the championship to the Andina agency. 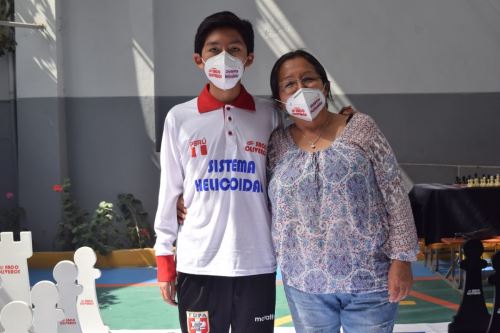 Diego’s mother is proud of her son.

“There is still a long way to go to get the title of Grand Master, but for my part I will always try to give my best in each tournament so that Peru has one more among its ranks”, he added.

It is important to mention and highlight the work of the young students who also brought great laurels to our country. In the women’s competition, Fiorella Contreras won the silver medal, while Heidy García, the bronze. They are also part of the chess hotbed of the Colegio Saco Oliveros, an educational institution that promotes the development of Peruvian chess from its classrooms.

This important event was organized by the Colombian Chess Federation with the sponsorship of the Government of Risaralda and the Ministry of Sport of Colombia and the Chess Confederation of the Americas (CCA). The championship was developed in six dates and 9 rounds.

Nelson Dávila, champion of Metropolitan Lima for the Peru Cup: “This is about celebrating little and working more”
World chess champions paid a trip from Cusco to Lima for recognition, but they only received an agenda and a portable charger
Kimberly García won a gold medal at the Oregon World Athletics Championships in the walk test

There are 3 different types of feta cheese. Here’s how to use each one.

AD Guanacasteca won 2-1 in their visit to Herediano