ROCHDALE – You may have noticed a bit of a team selection discussion in the Kangaroos camp. If not, congratulations.

With a quarter-final on the horizon, Mal Meninga vowed to choose his best team. at his disposal.

The Kangaroos coaches may want to watch another training session, scheduled for Salford on Tuesday morning UK time, but coach Wood has seen everything he needs to see. Here are your Kangaroos 17 to face Lebanon in Huddersfield.

Listen, let’s cut out the easy parts first. Teddy is captain, fullback and one of the few to play permanently. If you’re one of the people on the internet who says someone else should have 1 jumper, feel free to give yourself a triple.

Every moment Foxx plays in this tournament makes Brad Fittler’s decision not to pick him for New South Wales even more bizarre. He was close to the best player in the entire World Cup.

Latrell has excelled as a center for the Kangaroos and will only get better. A walk-up.

Val has been great and needs to start. Besides, I would also score the goals, but that’s just me. Deep in my heart I think Holmes could be better in this team as a winger, with Latrell moved to the other side and Matt Burton brought in to partner Addo-Carr, such is their combination at club level and the obvious advantages that Burto brings with the boot. But seeing as Holmes has only played in centers so far, I doubt that will happen, so in centers he stays.

What do you appreciate if you are Mal Meninga? The games you just saw, or the value of the season’s games in the NRL and at Origin level before? Let’s say Mal favors recency, because if he hadn’t, he would have talked a lot about rotation and opportunity.

On the evidence of the last three weeks, he must choose Campbell Graham. Murray Taulagi has the club’s connection to Holmes in him, but Graham did everything and more to earn selection. Taulagi wasn’t bad, but Graham was better. If Mal is true to his word on form, Graham plays. For the record, I think he’ll choose Taulagi anyway.

OK, big guy. Well, that’s not really the case: Nathan is a better player than Daly Cherry-Evans in 2022, has impressed when given the chance and deserves the chance. DCE has been good, even good, but if Australia are serious, they choose Nathan.

I’m not sure I believe the line of giving them equal chances, as it’s based on the idea that you’ll find out something about Nathan Cleary playing against Scotland and Italy. You won’t, and we haven’t. Likewise, we haven’t learned anything about DCE either.

For what it’s worth: I actively want Australia to lose, and to that end, I hope Mal goes for DCE. I’m sure Michael Cheika, Michael Maguire, Shaun Wane, Matt Parish and Kristian Woolf agree with me. 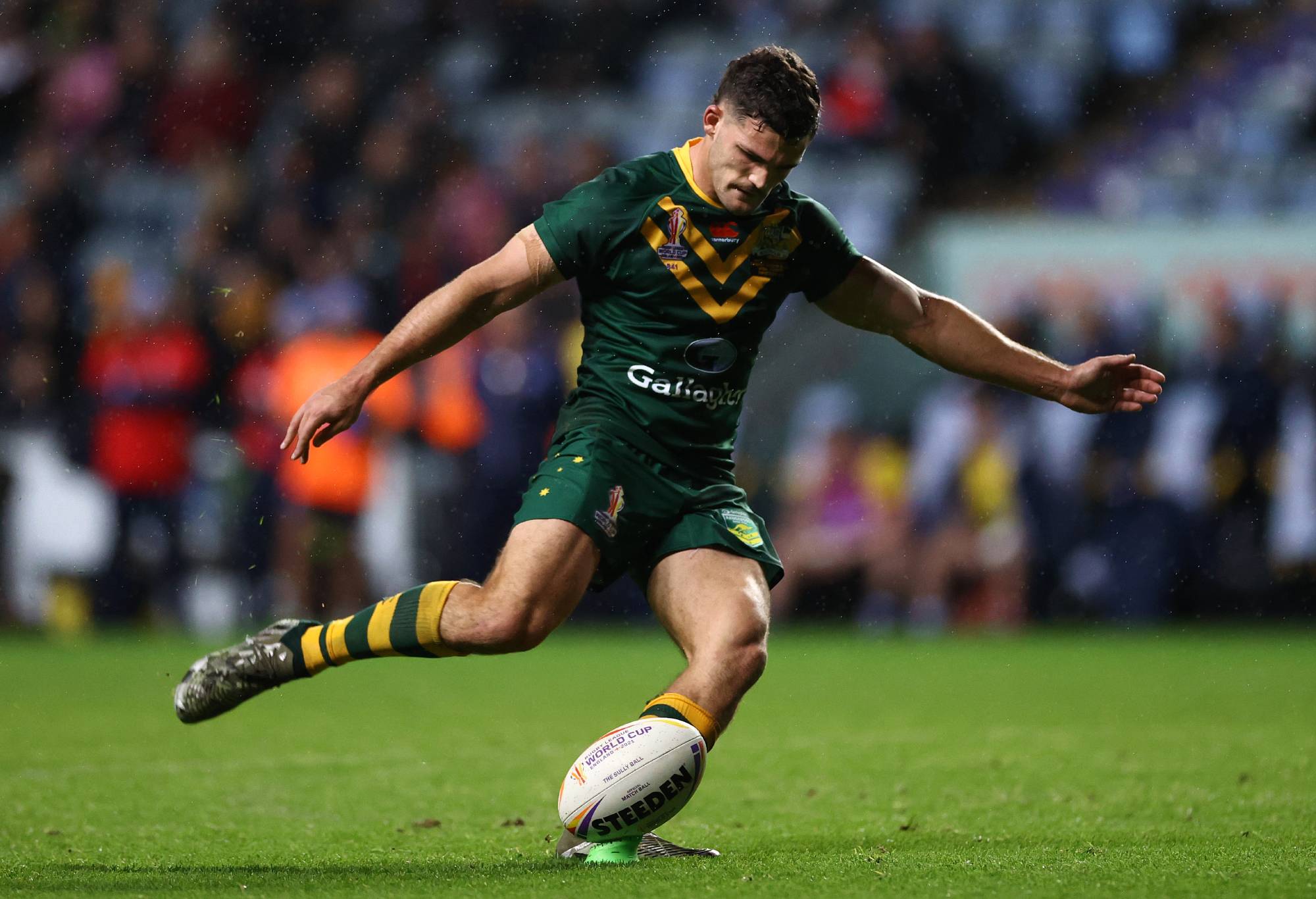 The front row is a tougher choice than you might have thought. Lindsay Collins is just a tourist and shouldn’t be anywhere near the in-form squad, but the big guy’s depth isn’t great. I also wouldn’t have picked Jurbo in the team as he’s not really a prop anymore and more of a soft sponge tackle machine than a line bender but given he’s in it he has to begin.

Jake isn’t much of an impact guy, so if he’s been playing at all it’s been from the start, and he’s playing enough minutes and making enough tackles to allow for a rotation of bigger, more threatening attackers . Imagine if one of them was Matt Lodge (not politically, of course, but on playing form), David Klemmer or Payne Haas. It’s been my long-held view that if Australia loses, that’s where they’ll lose it.

Another easy, his rotation with Harry Grant is excellent and Hunt provides deep halves to boot. Nothing to see here.

Tino has to play like a big man on this side due to the lack of options elsewhere. If you’re playing Jake, that means Tino has to take over from the start and act as enforcer. The result is that he can play shorter, punchier minutes, with Trbojevic taking over elsewhere.

There are plenty of rear row options and all of them have been decent. Me, I think Gus is impossible to ignore. He’s just more consistent and effective at defensively covering an edge. I would hear an argument that Jeremiah Nanai offers you more up front, but I’m not sure that’s what you need on this side.

I don’t see Australia struggling to score points, but I can see their defense is a problem. He hasn’t really been tested yet – only four tries conceded and all kicks missed – but when the opposition improve they will need to have their best on deck. Crichton holds up better than Nanai for me, though I expect Mal to pick the Cowboys man.

Murray is an odd choice. It’s obvious he’s going to play, and he has to play, but there’s a deep feeling somewhere in me that he’s exhausted.

The best thing he does for Souths is with the ball as a playmaker, which he won’t have any opportunities to do on that side. His ball speed game, arguably the fastest in the NRL, is also underutilized further down the middle.

These are just my thoughts on this: Murray is in and he’s on the edge.

Yeo has been the form lock for the competition domestically and has a great combination with Cleary. If you choose one, you should probably choose the other.

I massively rate Murray as a ball game lock and don’t think you would lose anything if he was in the 13 but given the Souths man’s ability to pass to the rim and even the mid to push, I’d take him to Yeo in his best position. 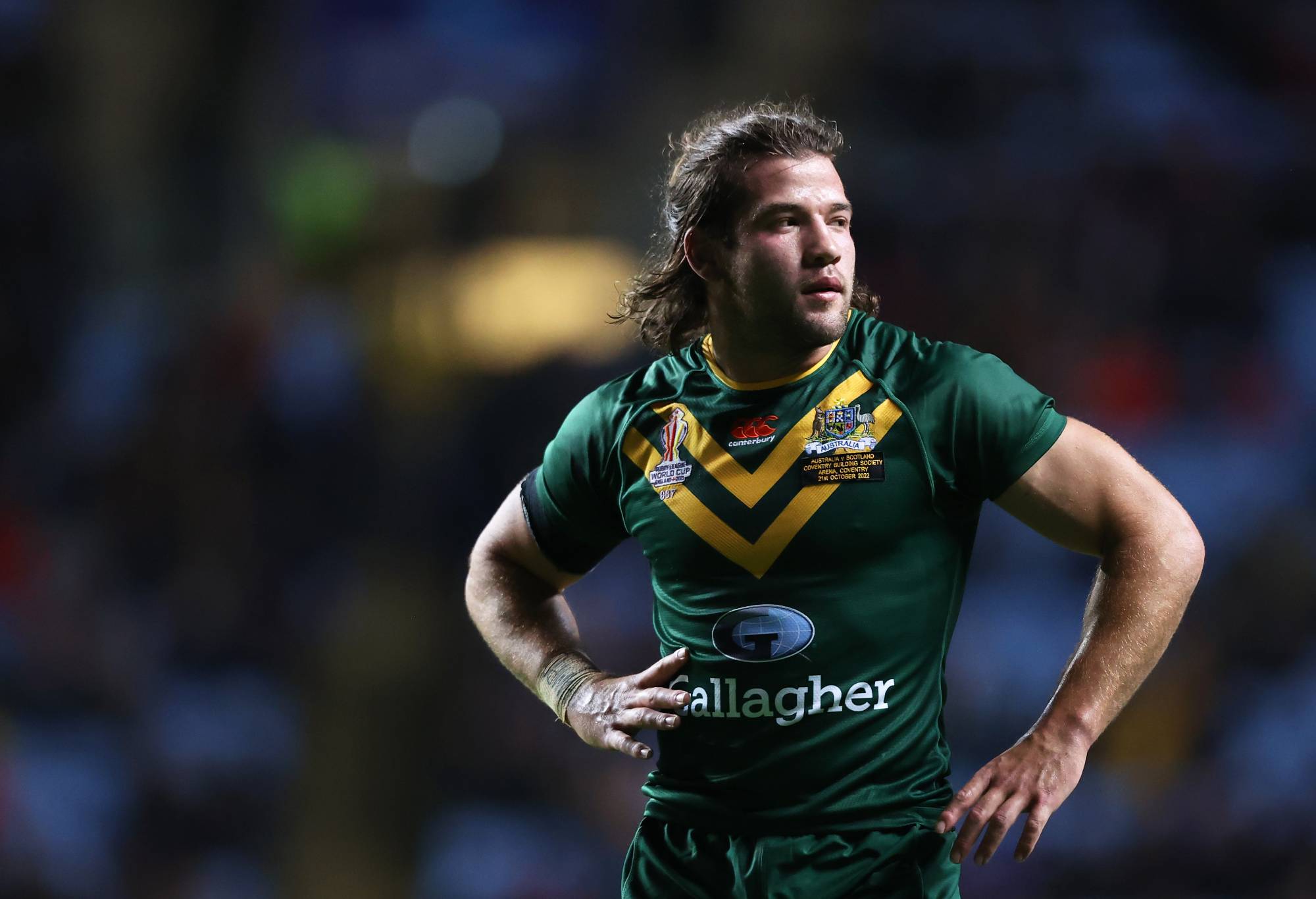 See Ben Hunt: These two work so well together on every level.

As mentioned under Jurbo, the lack of forward impact is a problem for Australia. Ideally, RCG would start, but given the lack of other big men, using Jake to absorb early impacts and then sending Reggie in is a better idea than the other way around. Unless you’re in a full-strength game and playing Collins and RCG, that’s really the only way this rotation can work.

Carrigan is on this side as a central striker, although I’m far from convinced that’s his best position. He’ll be touring with Tino and Jurbo because he needs to be on the team and, as he always does, will do a great job.

The unlucky character here is Reuben Cotter. He hasn’t done anything wrong and would rightly feel aggrieved not to play, but an in-between rotation that includes him, Carrigan and Jurbo is too small so have to give up to allow other guys to add that size .

The last place on the bench is difficult. There’s a solid argument that Cotter could be used here, but if he does, it adds an extra in the middle and takes an extra out of the edge. Considering that Murray can also play there, it doesn’t make sense to wear extras.

Instead, it’s a straight shootout between Martin and Nanai. As mentioned above, I think Mal will choose Nanai, but I’d go for Martin. This is for three reasons: firstly, I think he did more with the opportunities that were available to him in this tournament; second, I think he’s a more reliable all-rounder on both sides of the ball and third, I think he has a bit of dog in him that the young Cowboy has yet to show.

It’s an underrated quality, but one that England and New Zealand have in spades. I don’t know how many team games missed by bans are in this Aussie pack, but the overwhelming feeling is that they’re incredibly nice boys.

If Jared Waerea-Hargreaves, Joe Tapine and Nelson Asofa-Solomona – or Luke Thompson, John Bateman and Tom Burgess – are your opponents, then this kind of game is likely to happen to you. Surely if I was coaching the Kiwis or England I would tell them to bully this pack to the best of their abilities. Martin trumps Nanai in this regard.

Not all news on the site expresses the point of view of the site, but we transmit this news automatically and translate it through programmatic technology on the site and not from a human editor.
William2022-10-31
Facebook Twitter LinkedIn Pinterest WhatsApp