Newcastle boss Eddie Howe has admitted he feels unqualified to answer questions about the club’s Saudi owners amid the ongoing geopolitical debate over football.

The Magpies head coach was criticized for evading the question during his post-match press conference at Chelsea on Sunday.

At Monday night footballJamie Carragher and Gary Neville have said Premier League managers must be prepared to answer tough questions about who owns clubs and where their money comes from.

“In the modern world, part of my job is to find out what’s going on in the world and I find out about that,” Howe said in his pre-game press conference.

“I respect the opinion of Gary Neville and Jamie Carragher and I get on well with them. I have no problem with what they said. But ultimately it’s my right to say what I have. to say.”

Howe added: “It’s difficult for everyone involved. I understand the questions need to be asked, I have no problem with that.

“From my point of view – and I have always supported this – my specialty is football. That’s what I know, that’s what I trained for.”

Howe added: “As soon as I stray from that into an area where I don’t feel qualified to have a huge opinion, I think I’m stepping into dangerous territory, so I prefer to stick with what I believe I know.

“I am extremely proud to represent this football club, the supporters and the city and I try to create a team that the city can be proud of, and all my energy is dedicated to it and will continue to do so.”

Newcastle United boss Eddie Howe says he is immensely proud of his team and explains how he managed to turn the club around.

However, the 44-year-old revealed that he was reading the situation in order to know the details better.

He said: “Obviously part of my job now in the modern football management scene is to know what’s going on in the world, and I will have to do that.

Carra & Nev: Why Premier League managers have to cope 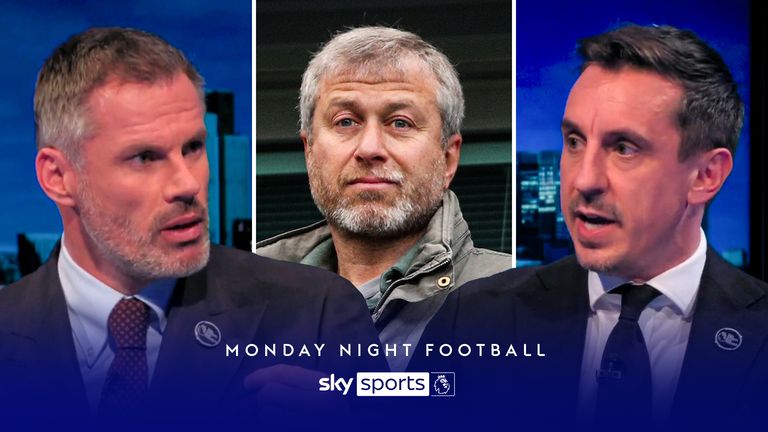 Gary Neville and Jamie Carragher discuss whether managers should answer questions about social and political issues.

Over the past week, Chelsea manager Thomas Tuchel has handled questions about Roman Abramovich and Russia’s invasion of Ukraine in a ‘statesman’s way’, according to Neville .

But Howe, who was appointed Newcastle manager by the club’s Saudi Public Investment Fund owners in November, declined to comment when asked if Saudi Arabia executed 81 people in a day after the defeat 1-0 for his team against Chelsea on Sunday.

Ask by FMN presenter David Jones on whether it’s fair that managers like Howe should be faced with questions about such matters, Carragher said: “Yeah, I think so, with the situation and the way everyone sees it and at how much a lot of people are against it – and that’s understandable.

“The question to Eddie Howe on Sunday, the tone was, ‘Eddie, what are you doing working for the Saudis, aren’t you aware of what they are doing?’

“It was the insinuation, and it’s a very difficult position for him.”

FREE TO WATCH: Highlights from Chelsea’s win over Newcastle in the Premier League.

Amnesty International has called on Howe and anyone involved with the club to speak out against human rights abuses in Saudi Arabia, after 81 people were executed in the Gulf state over the weekend.

Eighty per cent of the club is owned by the Saudi-led Public Investment Fund (PIF), which Newcastle and the Premier League say is independent of the Gulf state itself. However, its chairman is Saudi Crown Prince Mohammed bin Salman, who is also Deputy Prime Minister.

The executions took place on Saturday for crimes ranging from murder to membership in militant groups. It is the largest mass execution in the country’s recent history.

After his game against Chelsea at the weekend, Newcastle manager Howe was asked by the media about the events in Saudi Arabia. While he said he was “well aware” of what was going on, he insisted his focus was on football, which drew criticism.

Howe said: “My goal is to try to produce a team to win football games and get enough points to stay in the league, and that’s all I will talk about,” before adding: ” I’m going to talk about football, that’s all I care about.”

Amnesty International’s head of campaigns, Felix Jakens, said Sky Sports News: “At the end of the day, Eddie Howe is not the decider who should own Newcastle United. But he is the manager of football.

“What we urge him and anyone involved with the club to do is be aware of these issues. 81 people were beheaded in Saudi Arabia over the weekend. We would like him and others can talk about it.

“He’s not the person who makes the overall ownership decisions, but he has a voice to speak on those issues.”