In a Thursday article, ESPN detailed the deep ties that billionaire Brooklyn Nets owner Joe Tsai has with the authoritarian Chinese government and how those connections ‘personify’ the ‘compromise’ of the NBA’s hypocritical relationship with China. .

Tsai made his billions with the Chinese e-commerce company Alibaba. Since joining the NBA as an owner, he has been called “invaluable” to the NBA’s expansion in the communist nation.

But Tsai is also the poster child for NBA hypocrisy.

In an unusual and random act of journalism, in his Thursday piece, ESPN notes, “Tsai personifies the compromises built into the NBA-China relationship, which brings in billions of dollars but forces the league to deal with an authoritarian government and look beyond the kind of social justice issues he is fighting at home.

Tsai went to great lengths to serve two masters, both working at opposite ends. Tsai has pushed millions of dollars into the United States to fund dozens of awakening campaigns against “racism.” Yet in China, his company works to support entities and agencies that the US government is blacklisting for supporting a “campaign of repression, mass arbitrary detention and high-tech surveillance” using racial profiling.

According to ESPN, Tsai even thinks China’s brutal crackdowns have been a good thing because “he believes China’s restrictions on individual freedoms have paved the way for economic development that has improved the lives of millions of its citizens. “.

Tsai’s double play, however, did not go unnoticed. ESPN noted that the NBA owner has been criticized in the United States

“Joe Tsai is emblematic of American sports and business figures who criticize American imperfections, as we all should be, but who find excuses for the human rights atrocities committed in China, where he wins money,” said Matt Pottinger, a former national security deputy. adviser and specialist on China in the Trump administration, told ESPN. “Are we going to self-censor or even compliment the policies of a totalitarian dictatorship that commits crimes against humanity?

Insiders even insisted that Tsai extended his influence within the NBA to fire former Rockets general manager Daryl Morey for his 2019 tweet supporting the pro-democracy movement in Hong Kong. Tsai and the NBA have denied those charges.

Since then, under Tsai’s leadership, Alibaba has helped the Chinese government build “an intrusive, pervasive surveillance state that uses emerging technologies to track individuals with greater efficiency,” ESPN noted.

This surveillance state – the largest and most intrusive ever – has been used to imprison and enslave ethnic Chinese, especially the country’s minority Uyghur group. 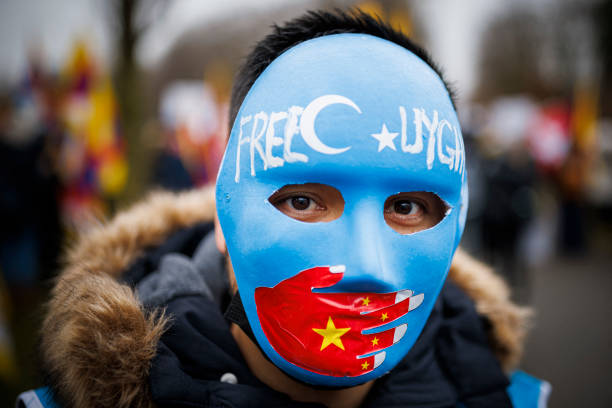 “Last time I checked, it’s a pretty catastrophic thing to be associated with,” said Matt Turpin, China’s former director of the National Security Council. “In today’s NBA, I guess that’s not a problem.”

In fact, some of the technologies Tsai helped fund and invent were used to detain and interrogate NBA personnel in China.

Meanwhile, Tsai and his wife, Clara Wu Tsai, have donated millions to various “social justice” organizations in the United States, including a $50 million donation to create the Social Justice Fund, a justice initiative race and economic recovery in Brooklyn.

So while Tsai donates to organizations in the United States that argue America is an irredeemably racist country, those with whom he is financially connected have helped China suppress, imprison, torture, enslave and murder millions. Uighurs, Christians, Falun Gong members, freedom fighters, and others in China.

Ultimately, Joe Tsai seems iconic to the NBA as his actions fit perfectly with the league’s support for branding America an evil and racist place while turning a blind eye to the overt racism and oppressive authoritarianism of their Chinese partners. .

Not all news on the site expresses the point of view of the site, but we transmit this news automatically and translate it through programmatic technology on the site and not from a human editor.
WilliamApril 14, 2022
189
Facebook Twitter LinkedIn Tumblr Pinterest Reddit WhatsApp Share via Email Print