“liberated areas”. This is how motorcyclists define the main accesses of the Metropolitan Area (AMBA) in which motorcycle thefts increased and became increasingly violent. The modality that grew the most is the assault on high-end vehicles, whose value ranges from USD 20,000 to USD 60,000. For lovers and users of these motorcycles, going out on weekends has become a risky situation. The lack of police officers on the highways of Greater Buenos Aires and the exit routes to the interior of the Province was pointed out as the main reason for the increasingly repeated episodes of this type of assault.

“One day after having been in the march (which motorcycle riders did on Saturday in front of the Faculty of Law in the Recoleta neighborhood), my motorcycle was stolen in the Western Access, at the height of General Rodríguez. The anger is that, after the claim we made, there was zero police presence in the Western Accessfrom General Paz to beyond Luján”, he told him last night Paul Elsinger a Infobae.

Yesterday afternoon, his Yamaha Teneré 250 was stolen when he was returning from lunch with friends at Mercedes. About 200 meters before the YPF, in the direction of Luján to Capital, he had seen a group of young people doing pirouettes with their motorcycles on the side of the highway and he had a bad omen. “I came from the middle because there was a lot of traffic. At kilometer 51, approximately one kilometer after the twin YPFs on the road, a high-capacity motorcycle with two people approached me at high speed. I move to the right to let her pass, she hits me, and the one in the back pulls out a gun and points it at my face, in the middle of traffic. He told me ‘get over the side’. I didn’t know if the weapon was real or not, but I stopped the motorcycle, threw them at him, and with my friend we got off in the middle of the highway and ran to protect ourselves. They took the motorcycle but luckily they didn’t shoot at us. i can count it”, He recalled how the assault was that he experienced yesterday, Sunday in full sun.

Testimonials are repeated in the WhatsApp groups of the different motorcycle brands or organized groups to get out of “rolling”: They point guns at them as they drive by at speed in the middle of the highway, or directly they shoot them in the legs to make them fall; they push them out of their moving wheels; either they throw something at them so that they lose control of the vehicle. Accelerating and trying to escape while being followed is also a very high risk due to the possibility of having an accident, causing a crash, or being fatally shot, as was the case of Andrés Blaquier.

It may interest you: The businessman Andrés Blaquier was murdered by motochorros who tried to steal his motorcycle in the Panamericana

In the last moment, many stopped going out out of fear. They no longer make trips to Luján, Carlos Keen, Uribelarrea, Lobos, Zárate or San Antonio de Areco. This Saturday, more than 10,000 bikers joined the march in front of the Faculty of Law of the UBA, in Recoleta, to ask for concrete prevention measures from the Police, with a greater presence of cell phones and motorcycle patrols. They also complained about the inaction of the Justice in this type of event. “They are hunting us and the thieves go unpunished”, they denounced.

The West Access, between the City of Buenos Aires and Luján, is one of the hot spots for motorcycle theft, but not the only one. When Elsinger went to the police station to file a complaint, the policemen themselves admitted to him that there were only 5 mobiles to cover from route 6 and route 5, all of Luján to General Rodríguez. “They told me that they knew there was a group of kids in the YPF but that, when they went with their cell phones, they threw stones at them and that they couldn’t do anything. They couldn’t shoot at them with rubber bullets because, per se, they’re not doing anything. They told me that as policemen they were tied hand and foot as long as they didn’t do anything illegal,” Elsinger said. In the hour and a quarter that he was at the police station making the complaint, he found out that three more motorcycles had been stolen in the same area. 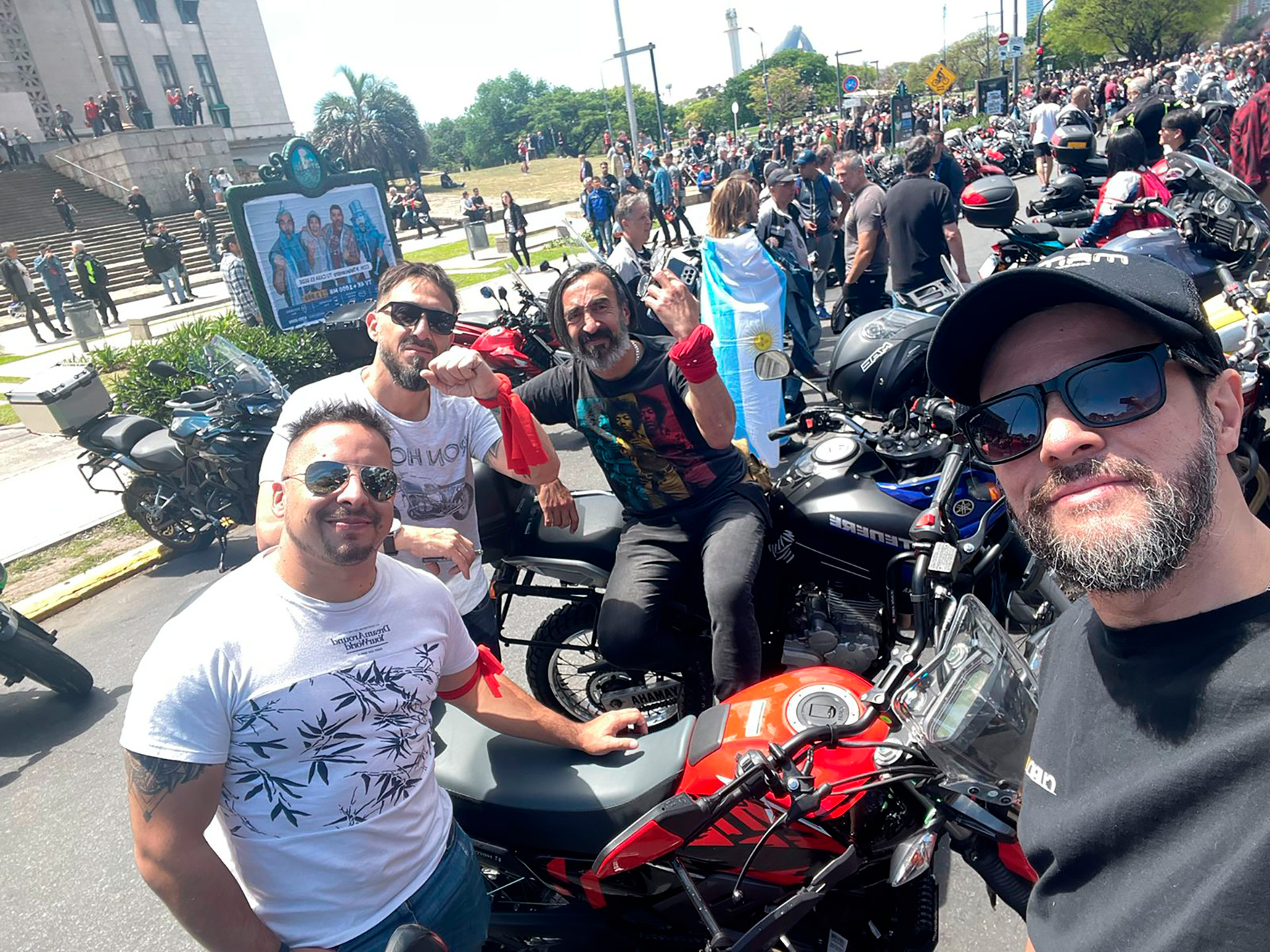 Pablo Elsinger (white shirt on the left) was on Saturday in the march for more security, and yesterday his motorcycle was stolen in Acceso Oeste

“Today you don’t get out of any access, everyone is completely taken over by motojets. You do miles and miles and you don’t come across any police,” he said. Stephen Grimaltmotorcycle specialist, who for months has been denouncing on his channel Youtube (EGVideos) the violence exercised by motochorros on motorcyclists to rob them in the main accesses and highways of Greater Buenos Aires (GBA).

In the AMBAaccording to official data from the National Insurance Superintendency (SSN) to which he had access Infobae, in 2021, 14,751 motorcycles were stolen. It was the area with the most robberies in the country: 70.4% of the total reported by insurers last year.

In the GBAthe two areas with the highest number of motorcycle robberies reported in 2021 are the southwest with 2,832 robberies, and the north-central with 2,340. They represented 13.5% and 11.2, respectively, of the total claims in 2021.

The Pan American, where Blaquier was killed on Saturday October 29 to flee with his BMW SG 1200 is another of the highways that became dangerous. A couple of motojets intercepted the businessman in the km 50, at the height of Pilara hot zone, like between Route 202 and 197. “Where the Unicenter is, they rob at gunpoint. And another very complicated section is route 8, where route 26 of Del Viso is, at the height of the Tortuguitas country, where criminals get together in groups to see what ‘prey’ they can go out to ‘hunt’. And further on Route 8, past km 100, the jets look for the traveler who goes alone and waits for him at remote service stations, “added Grimalt this youtuber who, to go out for a walk, loads his motorcycle in a truck and travels 200 km before taking it down on the road. 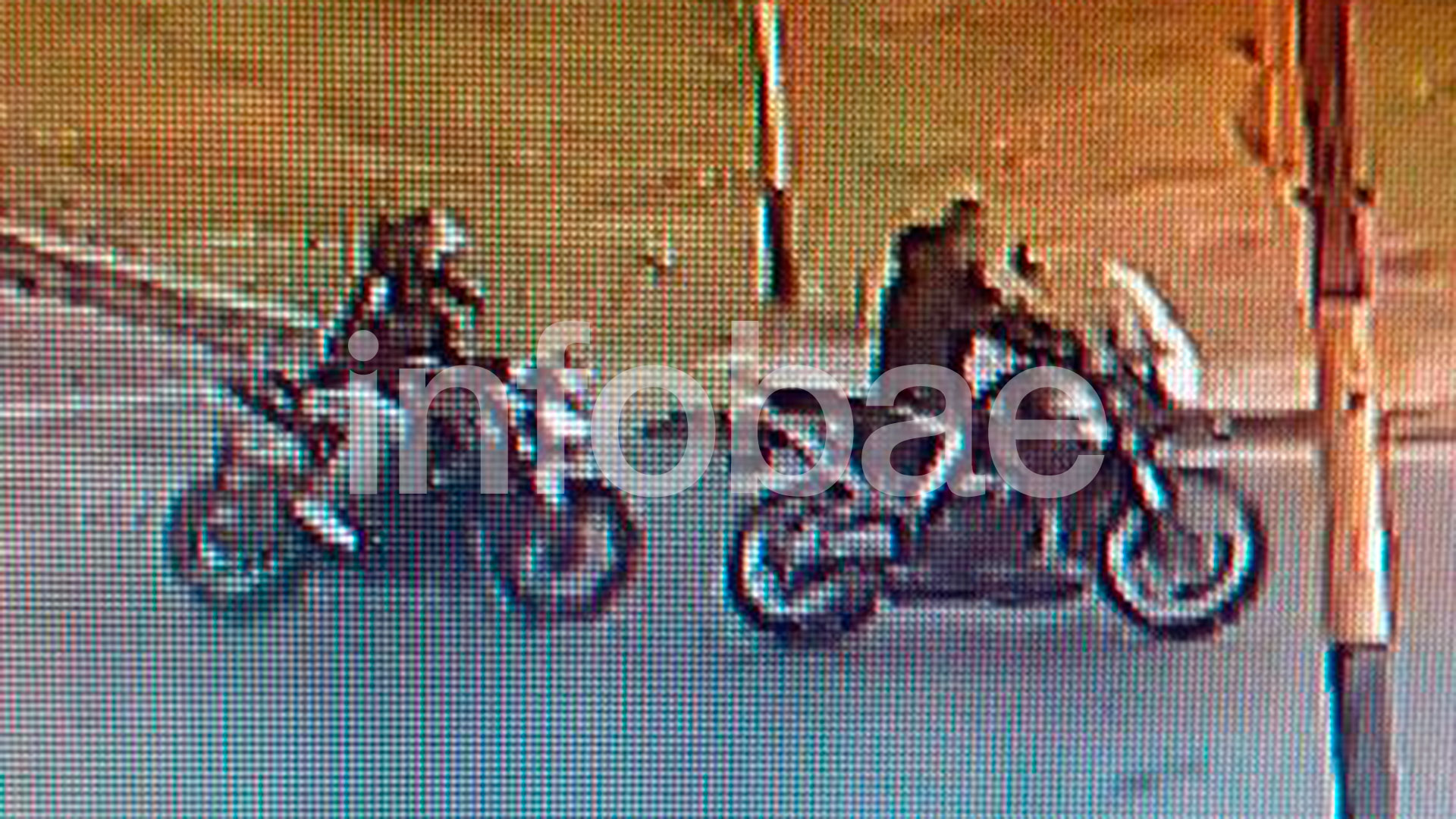 The criminals who stole Blaquier’s motorcycle and shot him dead, filmed by security cameras

Last May, the case of a motorcyclist who recorded the moment in which two thieves ambushed him when he was standing on the shoulder of the Panamericana due to a mechanical problem, with two friends, went viral. The thieves went the wrong way and pointed a gun at them. They tried to take a BMW, eventually escaping with a Bajaj Dominar 400 from the victims, who also had gloves and helmets stolen.

“Those who walk the Panamericana with a high-capacity motorcycle know that they have the ticket chopped,” he agreed Alexander Spoltore, another motorcycle lover who comes out in groups of shots. “Today the people who can choose, do not go out with the motorcycle in the accesses or highways of Greater Buenos Aires. He puts her in a van and takes her to the coast to drive her there,” warned this broker insurance.

It may interest you: What are the most stolen motorcycles in Argentina and how much do they cost?

The Access to Buen Ayre It is also an access heavily penalized for crime. “It is very complicated because of the places it goes through, very dangerous throughout its route. Stones are thrown at you from neighboring villages. If you stay there with a problem, leave the motorcycle and go”, warned another motorcyclist who suffered from insecurity on two wheels.

The Ezeiza-Cañuelas highway It is another target for thieves, and many users of high-end motorcycles who used to drive their vehicles from the track or anchored to that highway in order to speed up, stopped going due to the number of thefts. Less than a month ago, on that highway, a motorcyclist managed to escape a robbery after maneuvering at more than 270 kilometers per hour, after being cornered aboard two Ducati, a high-end vehicle whose value exceeds USD 30,000. He managed to flee because of his experience as a driver, but at a very high risk of having an accident or being shot by criminals. 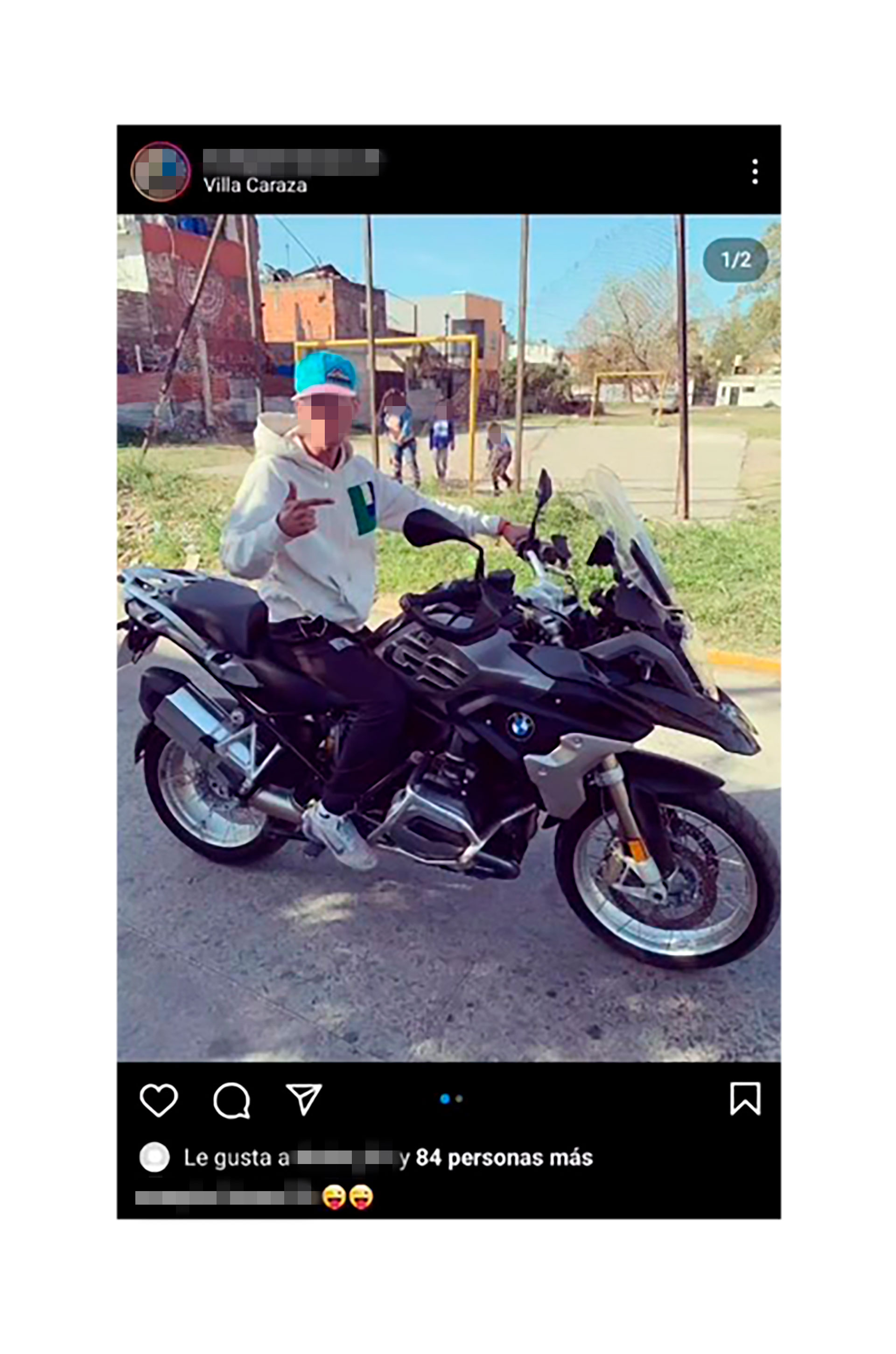 High-end motorcycle thieves display them as “trophies” on the networks

Another of the most dangerous highways for motorcyclists is the Richieri highway at the height of the Central Market, and in front of the Church of Jesus Christ of the Saints of the Last Days of Ciudad Evita. There, a large group of motojets usually gather, which can exceed a hundred, and they are waiting for “an interesting target” to pass through the highways in order to pursue it. Many of their motorcycles are “discarded”, without the plastics so that they are not recognized or break when doing pirouettes, without license plates and without mirrors. Despite being identifiable, motorcycle users report that “the police do nothing.”

The route 9, especially in the section between Zárate and Campana, also became very dangerous. Days before Blaquier’s crime, two BMW SGs similar to the one owned by the businessman were stolen in downtown Campana.

Other high-risk roads for motorcyclists are the General Peacethe national route 3, between Cañuelas and San Miguel del Monte; and the provincial routes 6 and 193.

Five days before the assassination of Blaquier, the national senator of Together Paul Daniel White He had presented a project to ask the national government to reinforce the patrolling of federal forces on national routes and highways in the AMBA area in the face of the escalation of the increase in armed motorcycle robberies. He also asked the Ministry of Security of the Nation to coordinate coordinated actions with the portfolio of the province of Buenos Aires, in order to establish a common strategy to combat the motochorros in Buenos Aires territory. 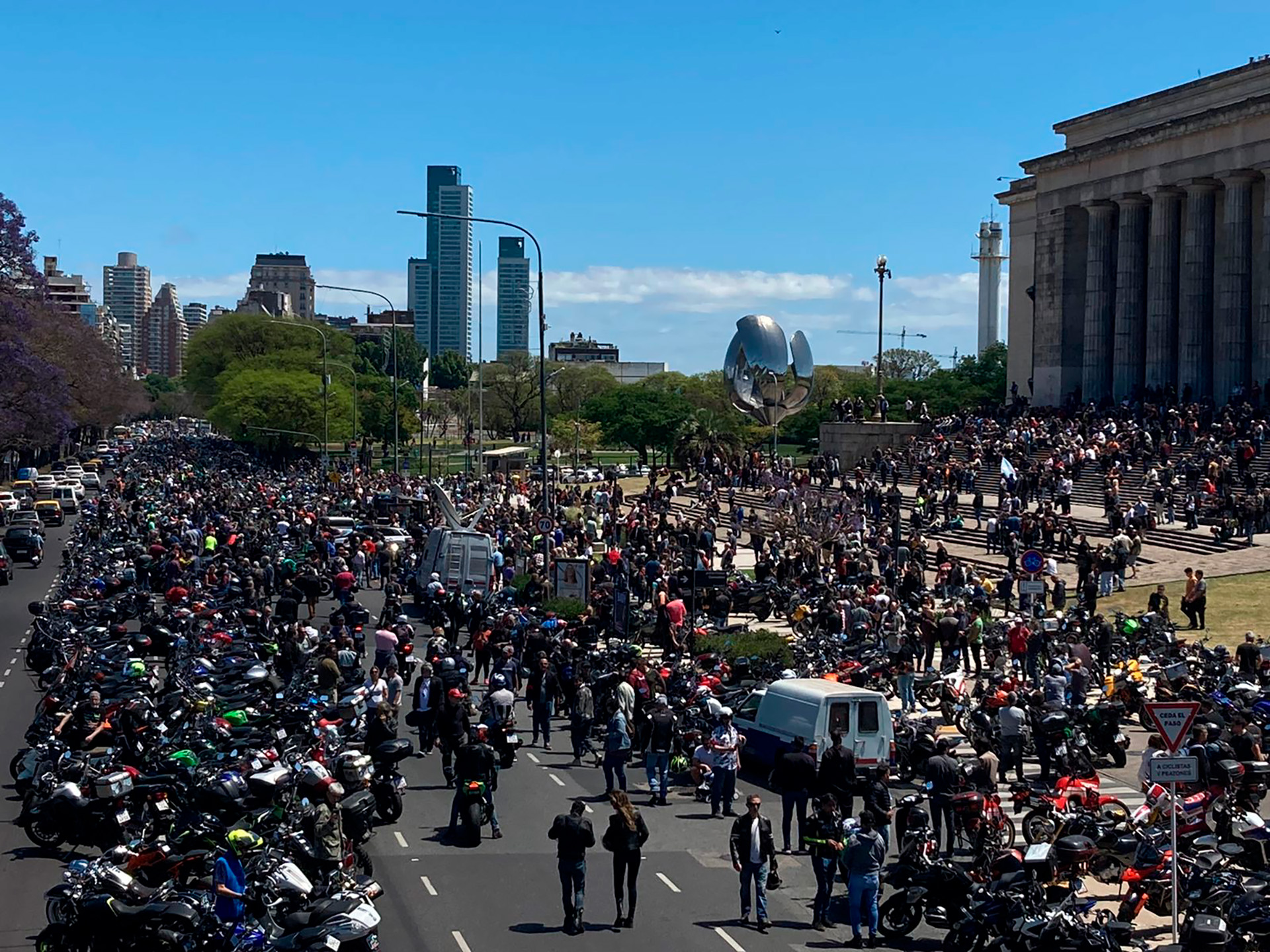 The bikers protest last Saturday for more security, in front of the Faculty of Law

“In the last three months, the armed robbery of motorcycles has dramatically intensified on the main access and exit routes to the Autonomous City of Buenos Aires and in several areas where motorcyclists usually travel for mini-tourism getaways. ”, based White. The Fuegian legislator argued in his project that “the Argentine motorcycle community is moved, fearful and fed up. The worst thing is that there are motorcyclists who are abandoning their outings and others who are beginning to leave armed. Soon a much greater misfortune will happen than the one caused by a simple robbery, if the National and Provincial Executive Powers do not take decisive action on the matter.”

The radical senator asked to “increase motorized patrolling, generate checkpoints on the aforementioned roads, stop and request documentation from all motorcyclists who go in pairs, and put civilian police on motorcycles (with short-distance support) to serve as a ‘hook’ to capture these criminals”.

What are the most stolen motorcycles in Argentina and how much do they cost?
The high-end motorcycles that are stolen in the Conurbano are displayed as trophies on the networks and then burned
In the last decade, motorcycle theft doubled across the country

Not all news on the site expresses the point of view of the site, but we transmit this news automatically and translate it through programmatic technology on the site and not from a human editor.
Sara Adm2022-11-07
Facebook Twitter LinkedIn Pinterest WhatsApp

The fashionable first lady of Ukraine