In a city of over 20 million people, Mark Overgaard Madsen experienced loneliness and devastation that mere mortals cannot imagine.

During the Beijing Olympics in 2008, sitting in the bowels of the gymnasium at the China Agricultural University, the Dane tried to soak up the atmosphere and assimilate what had happened to him.

Despite being one of the best wrestlers in Europe, the Greco-Roman wrestler was knocked out of the 74kg category in the very first preliminary round by Russian giant Varteres Samurgashev.

“It’s easy to win, to put it straight,” he told talkSPORT.com in a 2020 interview. World Championships, three years in a row.

“My hopes and expectations of winning an Olympic medal – a gold medal in particular – were really high.

“I had the whole country of Denmark to myself, I think even Sports Illustrated was evaluating the chances and they evaluated the handball team to become Olympic champions because handball is huge in Denmark. Then they had Mark O. Madsen.

Speaking to Madsen, even via a simple phone call, his passion for wrestling is effusive and unrestrained.

Inspired by his grandfather who worked at the Royal Arena in Copenhagen, Madsen fell in love with the sport and wrestled to some extent since he was six years old.

He is the most accomplished wrestler in Denmark’s history and has trained with some of the best athletes in the world since the day he left school, including with the US Olympic team at their base in Colorado Springs. .

Yet in the space of just six minutes his career was in tatters and he soon found himself in the shower with his dreams shattered and his hopes shattered on that fateful day in China.

He added: “I would say it was a defining moment in my life as well as in my sporting career, because getting ready for an Olympic gold medal and then having to go and shower after five or six minutes of wrestling was not only a loss; it was a disaster.

“And it really, really hit me hard. I didn’t just disappoint myself, I felt like I really let my family and my country down. I had to go back and really dig deeply and try to rediscover myself or even reinvent myself.

John Kavanagh, who coached Conor McGregor to both the UFC featherweight and lightweight titles, believes we “win or learn” and there is no real loss.

The loss in the bronze medal match at the London 2012 Games could not perturb Madsen and he eventually achieved his goals of winning an Olympic medal as he had dreamed of with his grandfather when they were considering to fight in front of millions at the Rio 2016 Olympics. collect money.

Yet something deeper burned inside Madsen, a fierce competitive edge that still drove him.

After trying his hand at mixed martial arts between the 2012 and 2016 Olympics, the Dane felt the need to conquer another discipline on his road to sporting excellence. And, just as he had dreamed of success as an Olympian, Madsen wanted to be recognized as the ultimate fighter.

He said: “Coming back from that loss, which I called a disaster, was tough. Still, winning the Olympic medal at the 2016 Games in Rio was a great sense of accomplishment and I just felt sadness. satisfaction.

“I was the first Dane to win a medal in eight years, so it was a major achievement for me as an athlete, but also for my family and my coaches and wrestling in general in Denmark.

“The UFC is the equivalent of what the Olympics are for wrestling.

“You can dream of reaching the Olympics, but you have to qualify for it. It’s really hard to consider joining the UFC, but the UFC has been a dream.

“So winning that medal at the Olympics kind of fulfilled my dream in wrestling, it made me think I was done with the mission there. Now is the time to move on.

After announcing his retirement from wrestling, Madsen set out to catch the eye of UFC President Dana White and fulfill his new dream of becoming a UFC champion.

Inspired by legendary Greco-Roman wrestlers like Randy Couture and Dan Henderson, “The Olympian” had to sacrifice everything again to pursue his dream.

“I left a very comfortable life in wrestling with a lot of good qualities,” he added.

“You had coaches, I had a club, I had a federation supporting me and I had to leave all that to focus 100% on MMA, and to be honest, it’s been a hell of a ride!

“Danish MMA is growing but, when I decided to join MMA in Denmark, it was young, and it is still young. 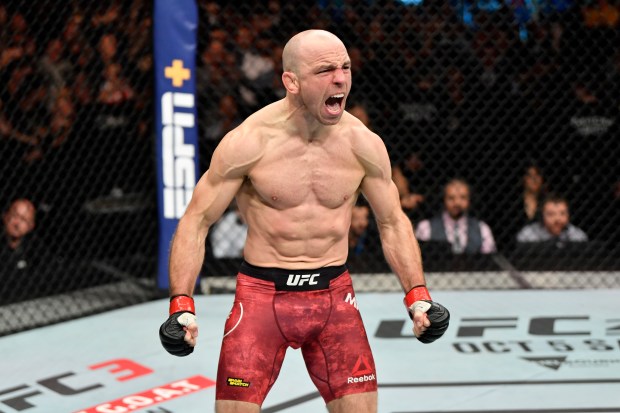 “But basically we had to develop or create every opportunity that came our way. And you can call that a sacrifice because I traveled four to five days a week. I’ve been away from my own family, my kids looking for the right training, the right training partners in Copenhagen, different places in Denmark and also traveling abroad and stuff.

“I even slept in a camping bag and in Copenhagen because I have to work and I had to train late at night and early in the morning. So yeah, it’s been a lifetime.

Despite skeptics questioning his age and adaptability, the 37-year-old took just two years to reach the UFC after his success with Cage Warriors.

His UFC debut came in his hometown of Copenhagen in the Royal Arena, where he made headlines and duly made a substantial impression against Danilo Belluardo on Jack Hermansson’s undercard against Jarod Cannonier in 2019.

He admitted: “I find it hard to think of anything bigger than the moment when I had those big black curtains pulled down and I could see the whole Royal Arena in Copenhagen,” he recalled,

“It was full of Danish fans screaming and screaming, I walked into the octagon and finished my opponent in one minute and 30 seconds or whatever, but it was massive.

“It was a huge moment for me as an athlete, but also for Danish MMA and Danish fans. That moment was for all the people who said it couldn’t be done. It was a wake-up call. for many people.

“I truly believe that anything we can dream of, we can achieve. There are many people who place limits not only on themselves, but also on others. »

Yet once again Madsen faced adversity as he broke his jaw in his second UFC fight. The lightweight contender found himself in serious trouble against Austin Hubbard at UFC 248.

But, thanks to his years of experience and lessons learned from Beijing and London, he knew he had the courage and resilience to dig deep and find a way to win.

He said: “When you talk about overcoming adversity, that’s probably one of the bravest things I’ve had to do.

“But it shows my dedication to my visions and goals; I won’t let anything stop the things I put on the board, not even a broken jaw.

“I mean, the pain is real. When you break your jaw in two places and you feel the piece of bone move and you think your teeth are broken, but it’s just the piece of bone that’s loose? You have to try to bite down on your mouth guard and keep pushing and pushing and really focus on the task ahead.

There has never been a more experienced Greco-Roman wrestler in UFC history than the Dane, who feels he has a few years left at the top of the sport and wants to win the 155-pound belt.

Khabib Nurmagomedov’s retirement opened up the division, with “The Eagle” perhaps the most dominant force ever seen in the lightweight division. A quick internet search will reveal the nickname “Khabib’s Kryptonite” associated with Madsen, given his Olympic pedigree.

But he said he would be a problem for whoever stands in front of him in the octagon, as Chan Sung Jung aka The Korean Zombie claimed he took welterweight champion Kamaru Usman to the ground multiple times at training. He’s a man who hasn’t been defeated by anyone in the cage so far.
“Apparently Kamaru Usman told Mark Madsen that there wasn’t a single person who was able to take him down. Mark took Kamaru down twice. Mark was so happy when he told me,” did he declare.

And it’s training with the best that helps him progress.

“My fighting style is always evolving; I travel, I work with different, interesting and very accomplished guys, so my style continues to develop,” he said.

Not all news on the site expresses the point of view of the site, but we transmit this news automatically and translate it through programmatic technology on the site and not from a human editor.
smsmalex2022-04-07
237
Facebook Twitter LinkedIn Pinterest WhatsApp