Paola Yazmín’s body was found in the cistern of the educational center where she worked (Screenshot: CNTE7Chiapas)

After a few hours of being reported missing, during the early morning of Thursday, December 8, 2022the Attorney General’s Office (FGJ) of the state of Chiapas released the report for the discovery of the body of Paola Yazmin Ocampo, 37 years old, inside a cistern located in a primary school in Tuxtla.

Authorities found 2 migrants dead inside a vehicle in Tapachula

The man and woman, presumably of Salvadoran origin, presented injuries from a firearm

The woman worked as mayor of the Elementary “David Gomez”, located at 12 Poniente Norte number 540 of the El Magueyito neighborhood. The authorities reported that the female had been reported missing last Wednesday, December 7.

Since last Tuesday the 29th, he would have reported to work on his schedule, however, during the day he vanished, a fact that caught the attention of the directors of the educational center.

Despite the fact that there was no trace of the woman, the teachers did not notify her relatives, but her husband, seeing that Paola did not return from work, went to file a complaint so that an alert would be released.

The elementary staff, in conjunction with his husbandstarted a search around, in such a way that preliminary data from unofficial sources indicated that the body of Paola Yazmín would have been found in a cisternsame as presumably it would have a padlock since, for this reason the authorities will investigate if it was a femicide.

His body was rescued by elements of the Fire Department and Civil Protection, later it was handed over to the experts of the State Prosecutor’s Office, who were in charge of the transfer to the Forensic Medical Service (Semepho) so that the law necropsy. Regarding the case, the prosecution opened an investigation folder.

During the first days of December, the woman attended the educational establishment in which worked 13 yearswhere he allegedly maintained contact with some co-workers.

Her sister last saw her around 7:30 a.m.at which time he left his home to go to the educational center, according to local reports. 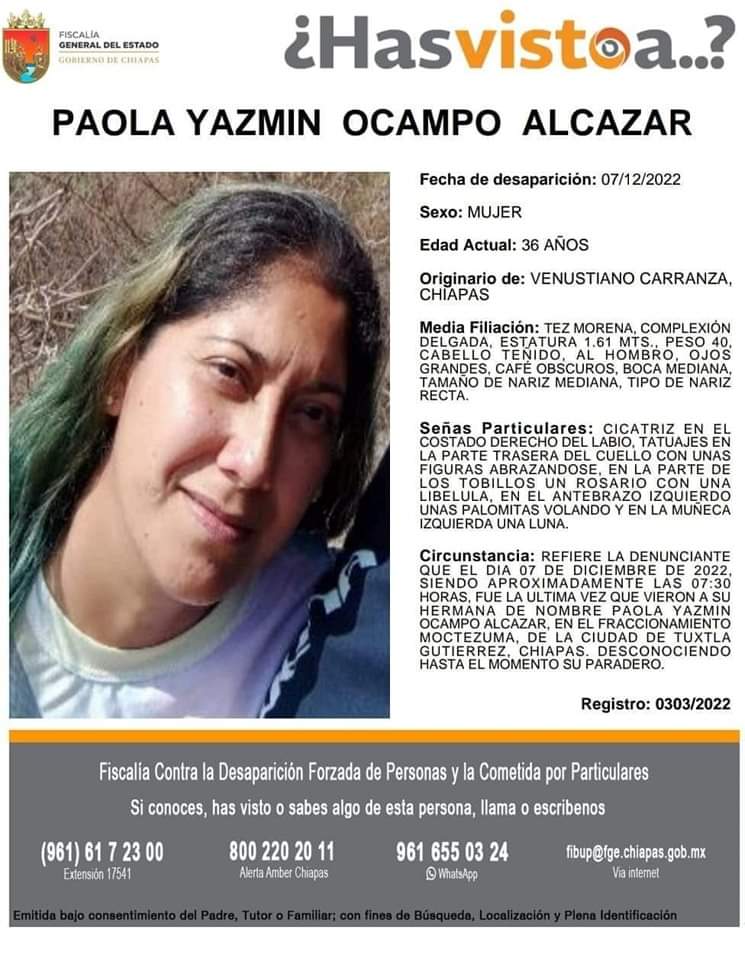 This is what the 37-year-old woman’s disappearance alert looked like (photo: FGJ Chiapas/Twitter)

Paola Ocampo was originally from the municipality of Venustiano Carranza, but when she grew up she moved to Tuxtla and lived in the Moctezuma subdivision.

Some people who were close to the woman mentioned that he was in good healthat the time that it will be reported as a missing person, the Chiapas Teachers’ and People’s Movement of the National Coordination of Education Workers (CNTE), of section 7, made a call to all the workers of the campus, to social organizations and the inhabitants of the state to request help in locating Yazmín.

Regarding the case, the school supervisor ruben ruiz you demanded from the authorities and to the three levels of government that use all investigative abilities available to them in order to resolve the case, reiterating their wish that don’t become one more full of impunity derived from the high insecurity experienced in the Mexican territory.

It should be remembered that Chiapas is the fifth federal entity with the most femicides registered during 2022, with a total of 38 cases in the section presented during the month of november Y 15 homicides of women.

The municipalities with the highest number of femicides in the country are in Nuevo León and the State of Mexico
In Mexico more than 10 women are murdered every day, only 24% of the cases are investigated as femicide
Rosa Isela, Martha Aurora and Ana Lilia: there are three femicides in Mexico of pregnant women in less than a week

Not all news on the site expresses the point of view of the site, but we transmit this news automatically and translate it through programmatic technology on the site and not from a human editor.
Sara Adm2022-12-09
199
Facebook Twitter LinkedIn Pinterest WhatsApp

How to see the green comet zooming our way for the first time in 50,000 years

Climate: the temperatures that will prevail this January 29 in Montevideo

The return of the musical phenomenon RBD that revolutionized Latin America