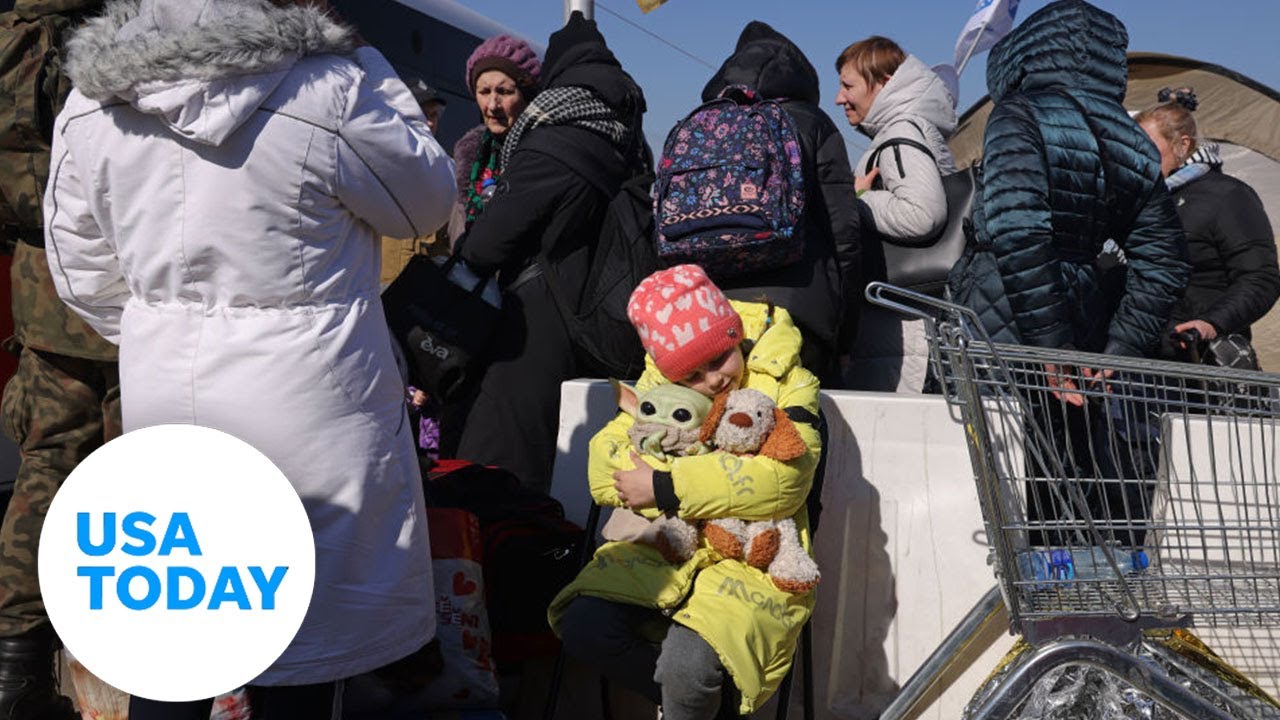 A fourth round of talks aimed at ending or limiting the devastating bombardment of Ukraine began on Monday, with the Russian side claiming significant progress and the bloodied but adamant Ukrainians demanding a ceasefire, the immediate withdrawal of all Russian troops and security guarantees.

Mikhail Podolyak, adviser to President Volodymyr Zelenskyy, called the talks a “difficult conversation” and said Ukraine’s demands remained unchanged despite a growing humanitarian crisis in some cities that has left hundreds of thousands of civilians struggling to obtain basic necessities such as food, water and medical supplies.

“Although Russia realizes the absurdity of its aggressive actions, it still has the illusion that 19 days of violence against peaceful cities is the right strategy,” Podolyak said on Twitter.

Russian delegate Leonid Slutsky said the talks could “evolve in the very next few days towards a unified position of the two delegations, towards documents to be signed”, Russian news agency RIA reported.

The talks come as the Red Cross warns of a ‘worst-case scenario’ for hundreds of thousands of civilians in the besieged city of Mariupol unless the parties agree to ensure their safety and access to humanitarian aid. The agency said in a statement that hundreds of Mariupol residents “face extreme or complete shortages of basic necessities like food, water and medicine.”

The Red Cross statement describes Mariupol as overwhelmed by “bodies – of civilians and combatants – which remain trapped under the rubble or lie in the open where they fell. Life-changing injuries and chronic, debilitating conditions cannot be treated. The human suffering is simply immense.

“ALL WE CAN”:Polish border town opens its doors to Ukrainians fleeing war

The agency called on the parties to agree on the terms of a ceasefire and on safe crossing routes and to ensure compliance with the agreement. He offered to act as a neutral broker in the negotiations.

“Time is running out for the hundreds of thousands of people trapped in the fighting,” the statement said. “History will look in horror at what is currently happening in Mariupol if no agreement is reached between the parties as soon as possible.”

►A pregnant Ukrainian woman and her unborn child have died, days after footage was seen around the world of her rushing on a stretcher to an ambulance amid the devastation of a bomb attack on a maternity hospital in Mariupol. The images embodied the horror of Russian attacks on innocent Ukrainian civilians.

►Ramzan Kadyrov, the extremist leader of Russia’s Chechnya region accused of human rights abuses by US and European human rights groups, said he was meeting with Chechen troops helping in the Russian assault against Kyiv. Ukrainian forces, he said, would have to surrender “or you’ll be finished”.

► At least 2.8 million Ukrainians have fled the country, according to the UN refugee agency. More than 1.7 million of them left through Poland.

►Europe saw tens of thousands of people gather on Sunday to protest the Russian invasion of Ukraine.

►American photojournalist Brent Renaud was killed on Sunday in Ukraine when Russian soldiers opened fire on a car in Irpin, a town 30 miles from the capital Kiev.

Much at stake for China in talks with the United States

National Security Advisor Jake Sullivan will meet Chinese Foreign Policy Advisor Yang Jiechi in Rome on Monday. The White House stressed that Monday’s discussion will cover a range of topics. But these are the first high-level in-person talks between the United States and China since Russia invaded Ukraine last month.

As the war enters its third week and civilian casualties mount, Beijing has tried to stay away. President Xi Jinping called for peace but opposes sanctions against Russia. Xi could play a pivotal role – either strengthening Russia militarily and economically or pressing Putin to step down.

“Cutting moment for Xi, China and the 21st century,” tweeted Richard Haass, president of the Council on Foreign Relations. Helping Russia would expose China to substantial sanctions and make it a pariah, Haass wrote. To refuse “would keep open the possibility of at least selective cooperation” with the United States and the West. Learn more here.

Ukrainian President Volodymyr Zelensky says he will continue to negotiate with Russia and is awaiting a meeting with its leader, Vladimir Putin despite the repeated escalation of Russian attacks in Ukraine.

So far, Zelenskyy’s demands have gone unanswered from the Kremlin. During his nightly address to his nation, Zelenskyy said Sunday that his delegation had a “clear task” to do everything to ensure a meeting between the two presidents, reports the Associated Press.

Zelenskyy said there were daily discussions between the two countries via video conference. He said the talks are needed to establish a ceasefire and more humanitarian corridors. He said these corridors had saved more than 130,000 people in six days.

The humanitarian convoy to the besieged city of Mariupol was blocked by Russian forces on Sunday. Zelenskyy said they would try again on Monday.

In a video posted on social media and in a later tweetMykhailo Podolyak, Ukraine negotiator and adviser to Zelenskyy, said Russia was beginning to engage constructively.

“Russia now perceives the world around it much more adequately,” Podolyak said. “He is much more sensitive to Ukraine’s position, which has proven itself on the battlefield, and to Ukraine’s actions in terms of protecting its interests.”

Pregnant woman and baby both die after bomb attack

A pregnant woman and her baby died after Russia bombed the maternity ward where she was due to give birth, the Associated Press reports. Images of the woman being rushed into an ambulance on a stretcher seen around the world epitomize the horror of an attack on humanity’s most innocent.

In video and photos taken by AP reporters on Wednesday after the attack on the hospital in the besieged city of Mariupol, the woman was seen fondling her bloody lower abdomen as rescuers rushed her through the rubble, his white face reflecting his shock at what had just happened. . It was one of the most brutal moments so far in Russia’s war on Ukraine, which has now lasted 19 days.

The woman was rushed to another hospital, even closer to the front line, where doctors worked to keep her alive. Realizing she was losing her baby, the doctors said she screamed at them, “Kill me now!”

Surgeon Timur Marin found the woman’s pelvis crushed and the hip detached. Doctors delivered the baby by caesarean section, but he showed “no signs of life”, the surgeon said.

Then they focused on the mother.

“More than 30 minutes of resuscitation of the mother did not yield results,” Marin said on Saturday.

The newly installed mayor of the Russian-occupied Ukrainian city of Melitopol said “Russian TV channels” would soon be broadcasting to the region. Galina Danilchenko said in a TV video on Sunday that there was “a great deficit of reliable information circulating”, as the broadcast decision, according to CN.

His televised speech was later posted on social media by pro-Russian Telegram channels and the Ukrainian-controlled Zaporozhye regional administration.

Danilchenko was named mayor after mayor-elect Ivan Fedorov was arrested by gunmen on Friday. The prosecutor’s office of the separatist Russian-backed Lugansk region later charged Fedorov with terrorism offences.

American photojournalist Brent Renaud was killed in Ukraine on Sunday when Russian soldiers opened fire on a car in Irpin, a town 30 miles from the capital Kiev. A second American journalist, Juan Arredondo, was rushed to hospital with shrapnel injuries, police said.

Arredondo, 46, told Italian journalist Annalisa Camilli in an interview from a hospital that the two men were filming refugees fleeing the area when their car stopped at a checkpoint and the Russians began to drive in. shoot. He said Renaud had been shot in the neck.

Renaud, 50, and his brother Craig have frequently collaborated on film and television projects. They covered the wars in Iraq and Afghanistan, the earthquake in Haiti, political unrest in Egypt and Libya, extremism in Africa, cartel violence in Mexico and the refugee youth crisis in Central America, according to their website.

Renaud was working on a project in Ukraine focusing on the global refugee crisis for TIME Studios, the company said in a statement Sunday afternoon.

Not all news on the site expresses the point of view of the site, but we transmit this news automatically and translate it through programmatic technology on the site and not from a human editor.
remon2022-03-14
Facebook Twitter LinkedIn Pinterest WhatsApp

Warriors’ championship DNA will matter most in NBA open era

Academy bans Will Smith from attending Oscars for 10 years