Heavy rains continue to wreak havoc in several parts of India. There is a flash flood warning in Vidharba district, Maharashtra, and “moderate rainfall activity” is expected to continue over Uttar Pradesh, Bihar and northeastern states for one or two days, said the Indian Meteorological Department. He also expects active monsoon conditions over central parts of India for the next few days.

Flash floods were also reported in several districts in the hill state as vehicles and stores were swept away. Meanwhile, severe waterlogging has been reported in Madhya Pradesh’s Indore following unrelenting rains.

Here’s today’s weather update (Friday, August 12) and a list of states where precipitation is likely.

Heavy rains, thunderstorms and lightning are forecast in Mandsaur, Ujjain, Dhar, Khargone, Betul, Chhindwara, Balaghat, Jabalpur, Seoni, Mandala, Narsinghpur, Vidisha, Sagar and Rajgarh among other districts. In Indore, two people were washed away in swollen sewers following heavy rain and efforts were underway to find them.

According to ANI, up to 120 human lives and 240 animal lives have been lost due to heavy rains in various districts of Maharashtra from June 1 till today.

120 human lives and 240 animal lives have been lost due to heavy rains in various districts of the state from June 1 to present. pic.twitter.com/gx9QeZ7QMA

Heavy rains are likely in Chamba, Kangra, Mandi, Solan, Sirmaur, Una, Kullu and Kinnaur. A yellow and orange alert has been issued in these areas of Himachal Pradesh.

Earlier on Thursday, two women were reportedly buried alive under rubble following a landslide in Kullu. Ten stores and three vehicles were swept away following a downpour at the Deuthi gram panchayat in Anni tehsil.

Heavy rains are very likely in isolated places in Raigad, Ratnagiri, Pune and Satara. Light rains are expected in the rest of Maharashtra. On Thursday, the Met Office warned of flash flooding at Vidarbha. Some rivers in the Vidarbha region were flooded after heavy downpours and several people from Bhandara and Chandrapur districts were moved to safer locations, officials quoted by PTI said. 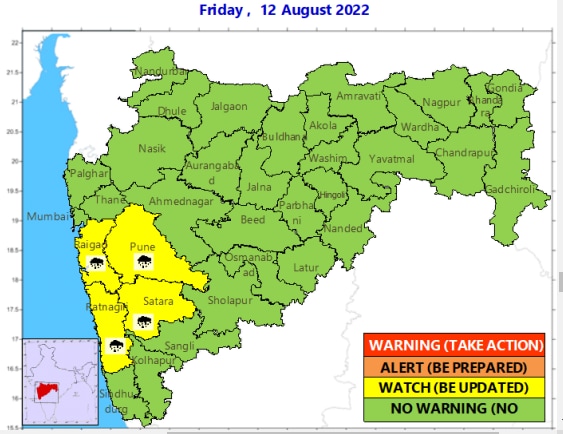 Heavy rains are likely in Belgaum, Uttar Kannada, Shimoga, Udupi, Chikmagalur, Hassan and Kodagu. No warnings were issued in the rest of the state.

The Kampli-Gangavathi bridge was submerged after water was released from the Tungabhadra dam in Koppal. Kote Anjaneya Temple and nearby places were also flooded.

Karnataka | The Kampli-Gangavathi bridge was submerged after water was released from the Tungabhadra dam in Koppal. Kote Anjaneya Temple and nearby places were also flooded (11.08) pic.twitter.com/KqUfQTYz6h

A yellow alert – warning of heavy rain – has been issued in several parts of Odisha including Puri, Jagatsinghpur, Kendrapada, Angul, Cuttack, Khordha, Dhenkanal, Sambalpur and Bargarh.

Meanwhile, “a low pressure area is likely to form over the northern Bay of Bengal around August 13, 2022,” IMD said. It is likely to become more pronounced by Friday and move west-northwestward thereafter. 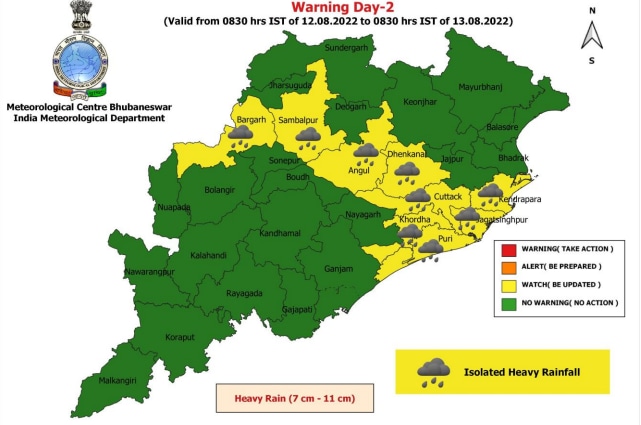 The meteorological service forecast heavy rains in most parts of Rajasthan for four to five days. It issued a ‘yellow alert’ for heavy rain accompanied by thunder and lightning in several parts of Jodhpur, Bikaner, Jaipur, Bharatpur and Ajmer divisions. Light to moderate rainfall is also likely in parts of western Rajasthan on August 12, 13 and 15.

Light rain is likely in parts of Delhi-NCR on Friday. The IMD predicted “generally cloudy skies with light rain and strong surface winds.” Meanwhile, the Yamuna River in Delhi is flowing above the danger mark as the river level reached 205.38 meters at 4 p.m. Friday.

delhi | The Yamuna River flows above the danger mark in the capital as the river level reached 205.38 meters at 4pm today.

“The water level is close to the warning zone. We have put boats, motorboats on the river to warn people. Shelter, food given to those who have been displaced due to that,” said yacht club manager Harish Kumar.

The Yamuna is flowing precariously near the warning level of 204.5 meters in Delhi and is expected to breach the danger level of 205.33 meters on Saturday morning, authorities quoted by PTI as saying. A flood alert is declared when the Yamuna crosses the alert level, and people living near flood plains and in flood zones are evacuated.

Janjgir-Champa and Raigarh are likely to witness heavy rains, while thunderstorms and lightning are likely in several other parts of the state.

A yellow alert has been issued in Uttarkashi, Tehri Garhwal and Dehradun districts of Uttarakhand. Heavy rains in Uttarakhand caused increased rivers which damaged buildings and shops while landslides in the hills blocked national highways and a number of rural roads on Thursday. A swirling stream in Khablisera village swept away eight shops in Uttarkashi district in the early hours of Thursday, the state emergency operations center (SEOC) said.

Asian markets are mostly up on global indices