In a duel full of vertigo and emotions, the teams were unable to take advantage. The clearest was that of the Patron with the penalty that Justo Giani wasted in the face of Franco Armani’s resistance, but the Millionaire also disturbed Altamirano with the interventions of Nicolás De La Cruz and Juanfer Quintero. They went into the break 0-0.

Pablo Solari faces the right sector. The striker was one of the most incisive of the first 45 minutes

Controversy at the end of the first half

Sebastián Medina falls inside River’s area, but for Patricio Loustau it was outside the area. However, from the VAR they informed him that the infraction was within the limits of Armani and the referee sanctioned a penalty for Patronato.

Third booking of the night

Marcelo Estigarribia received a yellow card after a tough offense against Milton Casco.

Before the end of the first half, the Doll asked Esequiel Ship that intensifies the heating. Napoleon was not entirely satisfied with the production of his team during the first stage

Nicolás Castro is booked for another foul near the area and River again has a free kick to try to break Patron’s resistance. Juanfer Quintero crashed his shot against the crossbar after a slight deflection on Justo Giani.

First booking of the match

Sebastián Medina saw the yellow card after a tough offense against Nicolás De La Cruz. Patronato is one of the teams with the most infractions so far in the Professional League with 371.

The millionaire loses it again

Enzo Pérez teamed up with Solari after an extraordinary assist between the lines. The young attacker got rid of his mark, but defined the near post with a deflected shot.

Juanfer Quintero wanted to hit him, but he gave the opportunity to Nicolás De La Cruz. The Uruguayan failed to overcome the barrier.

Juanfer Quintero sent a delicious center for the forward’s arrival, but the scorer hesitated and squandered the action. The claims of his companion marked that the Hummingbird should have gone decisively to the ball.

The first was for River

A projection by Solari disarmed the local defense and Raúl Lozano came to cut the center that was aimed at Borja. The Band presses with the ball stopped.

River moved and there is already action in Paraná. The Muñeco Gallardo team seeks to take possession of the ball in the first movements of the duel

The teams come out on the field

A crowd filled the Presbítero Bartolomé Grella, where 1,500 River fans came to support Marcelo Gallardo’s team. The popular ones for visitors had a value of 6,000 pesos.

The players led by Colorado Sava finish the warm-up before going into the locker room to change, listen to the latest instructions from the coach and return to the field of play to test their strength against River Plate. 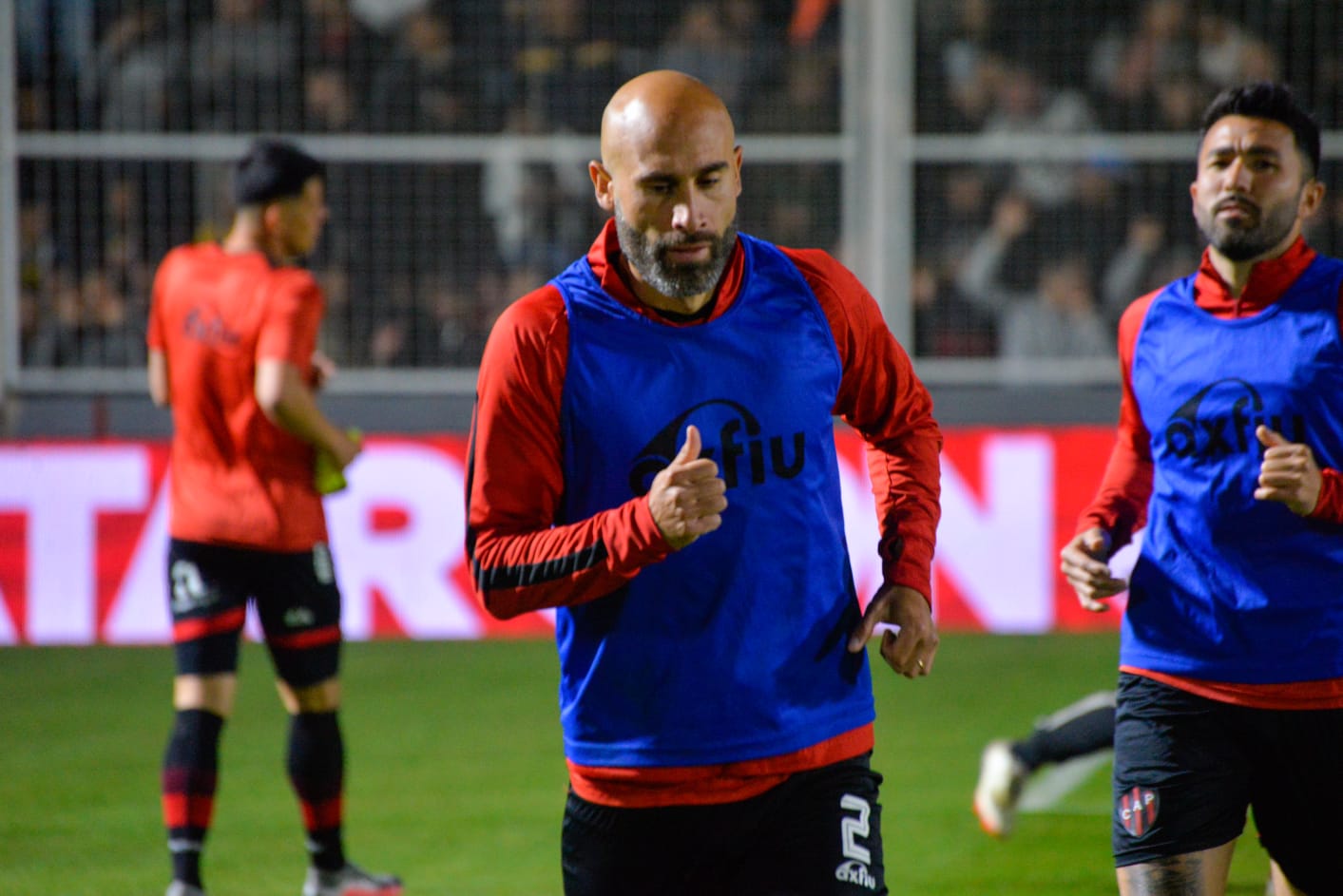 The Patronato goalkeeper, Facundo Altamirano, finalizes the details in the pre-competitive movements before the start of the match, scheduled for 8:30 p.m. with arbitration by Patricio Loustau and broadcast by ESPN Premium. 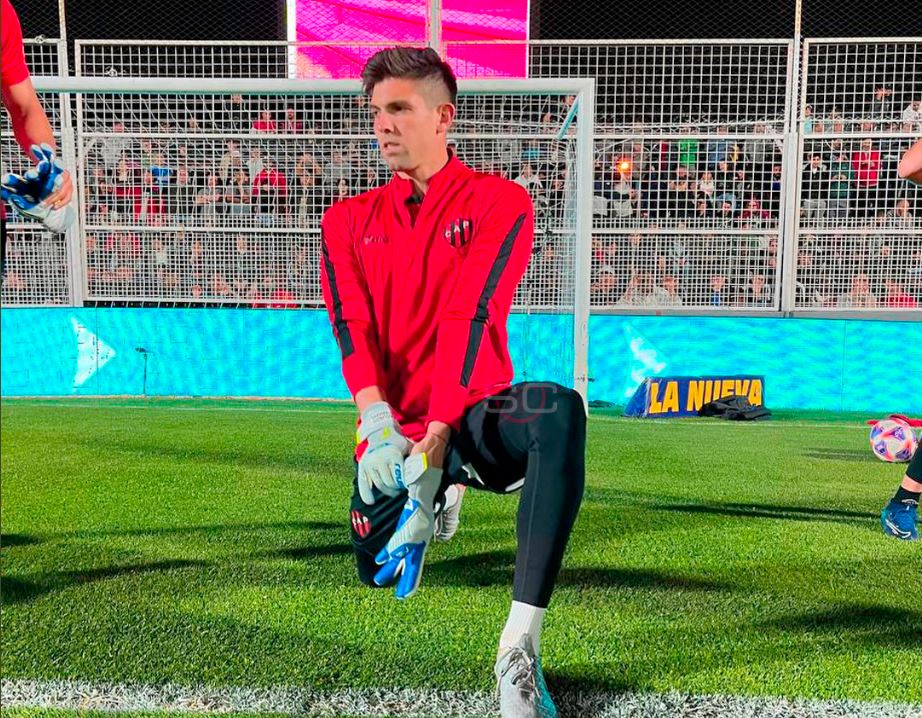 The goalkeeper wants to show off again before the millionaire power

Facundo Sava also confirmed the 11 protagonists who will go for the feat against River Plate. 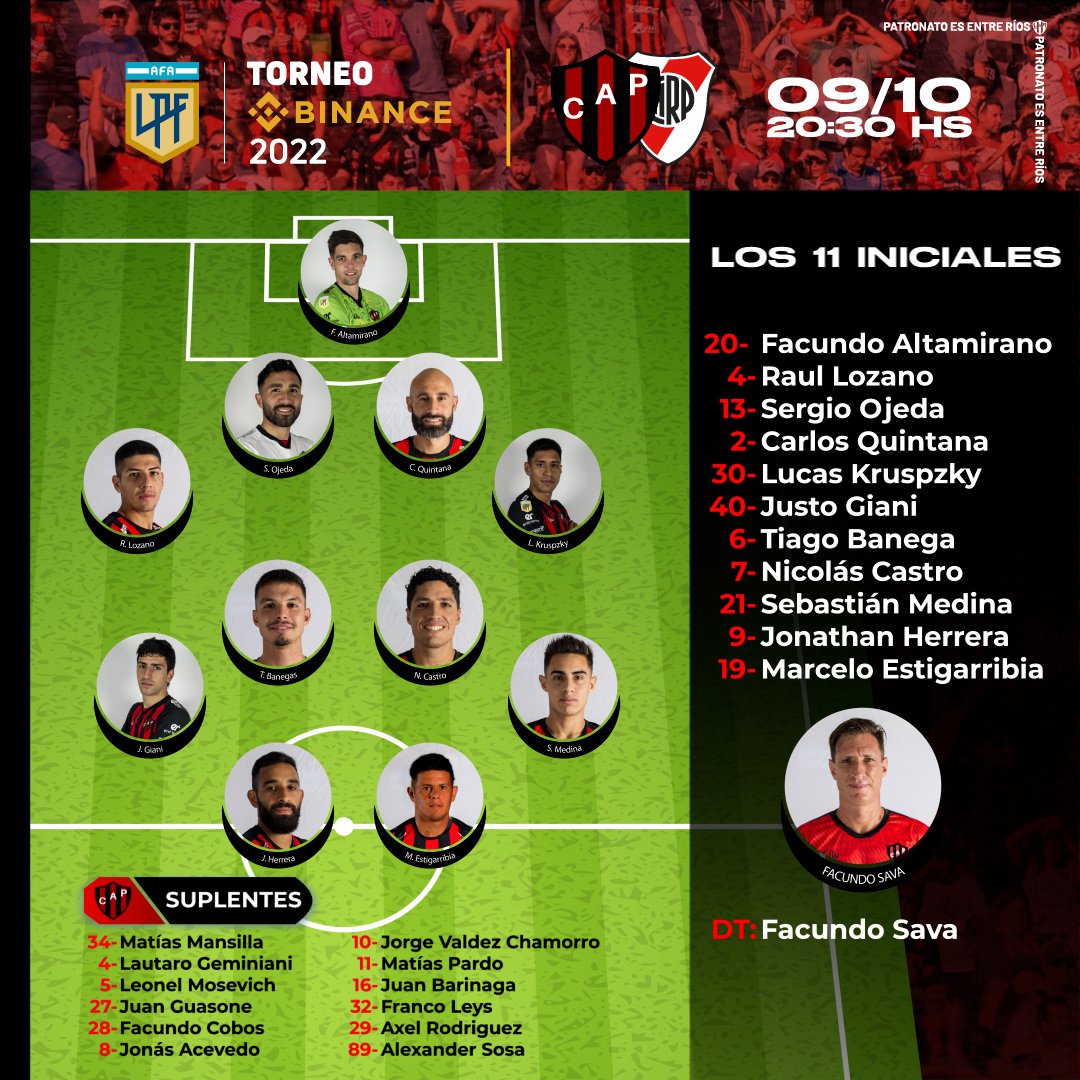 The 11 of the Pattern

“I love you Gallardo! I love you Marcelo! I love you”, this was the affectionate reception of the fans who are in Paraná to welcome the millionaire delegation to the Patron stadium.

MORE EXAMPLES OF LOVE TOWARDS RIVER IN PARANÁ: great reception from the Millonario fans to the campus. Attention to the shouts to the Gallardo Doll! pic.twitter.com/QhyhAxSPXh

Marcelo Gallardo confirmed to the eleven from River Plate that they will go out on the field to face Patronato. 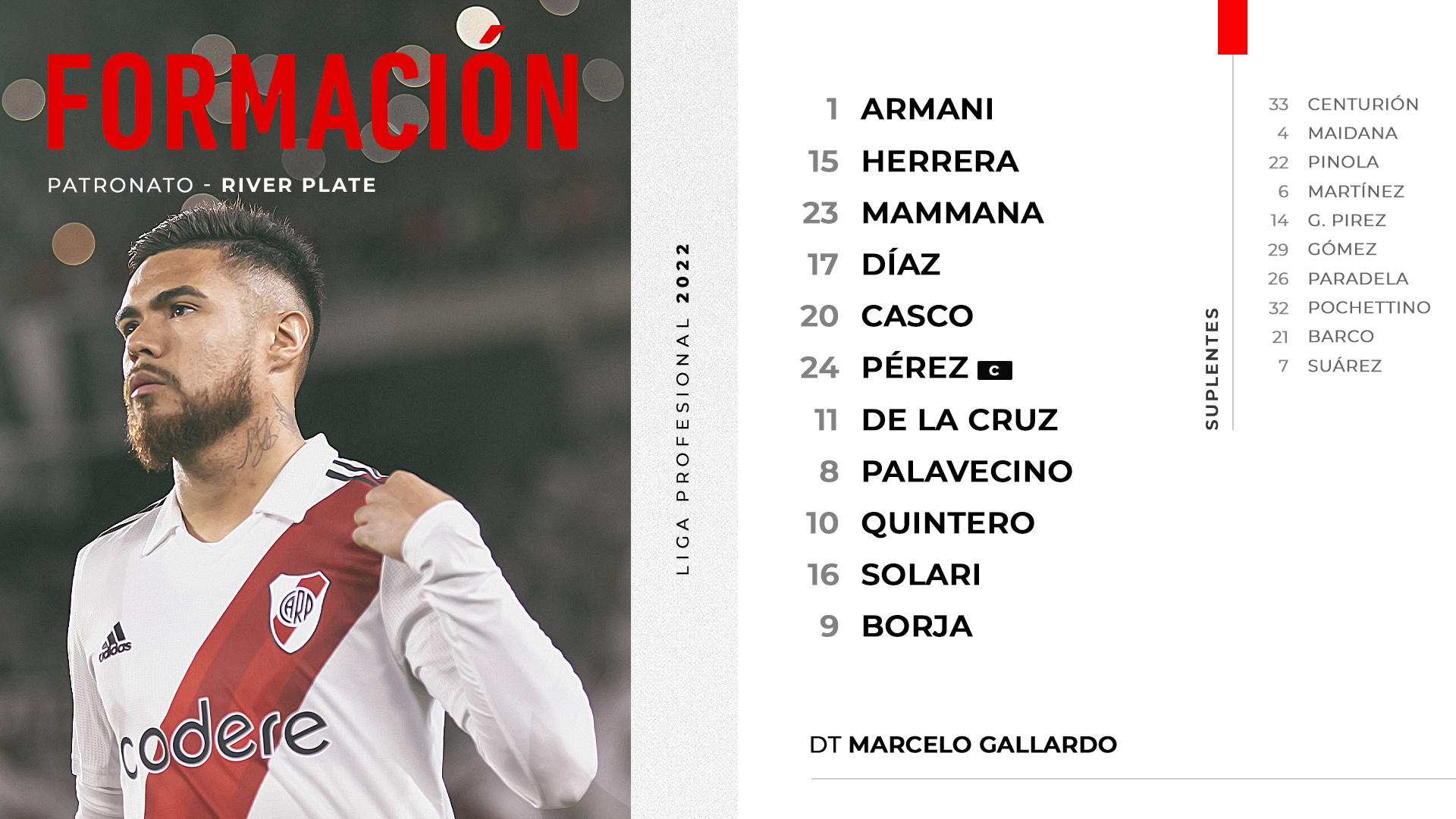 The Doll hit the form in the visiting locker room

With a smile on his face, Facundo Sava entered the Presbítero Bartolomé Grella stadium. Colorado hopes to repeat the result of the Argentine Cup to dress again as an executioner against the Millionaire. 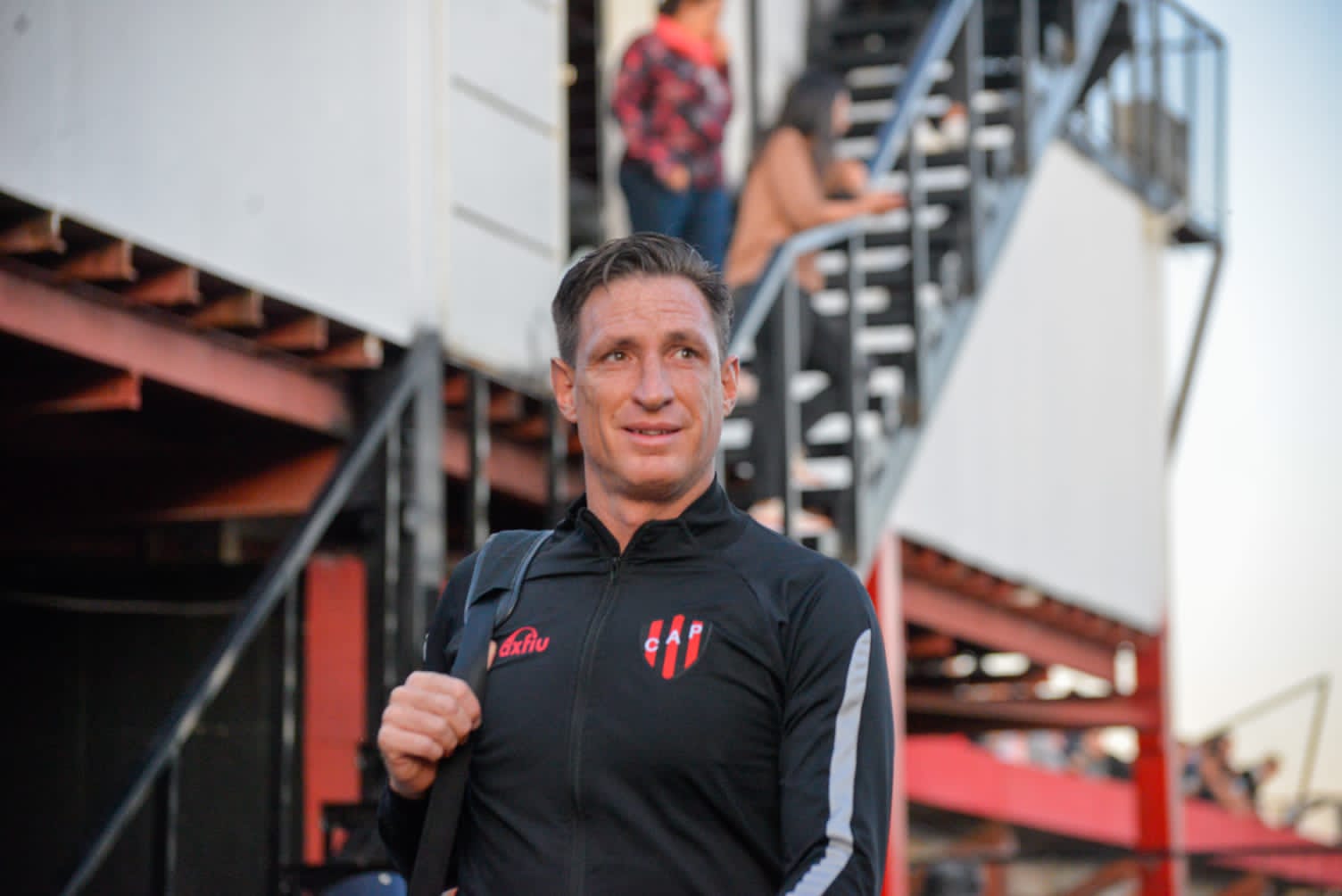 The River Plate delegation leaves for the stadium with the illusion of adding another victory. The players received the affection of the local public in Paraná, but the Gallardo Doll was the most applauded.

All ready in the away locker room. The Millionaire will take to the field with the traditional shirt and the red band… 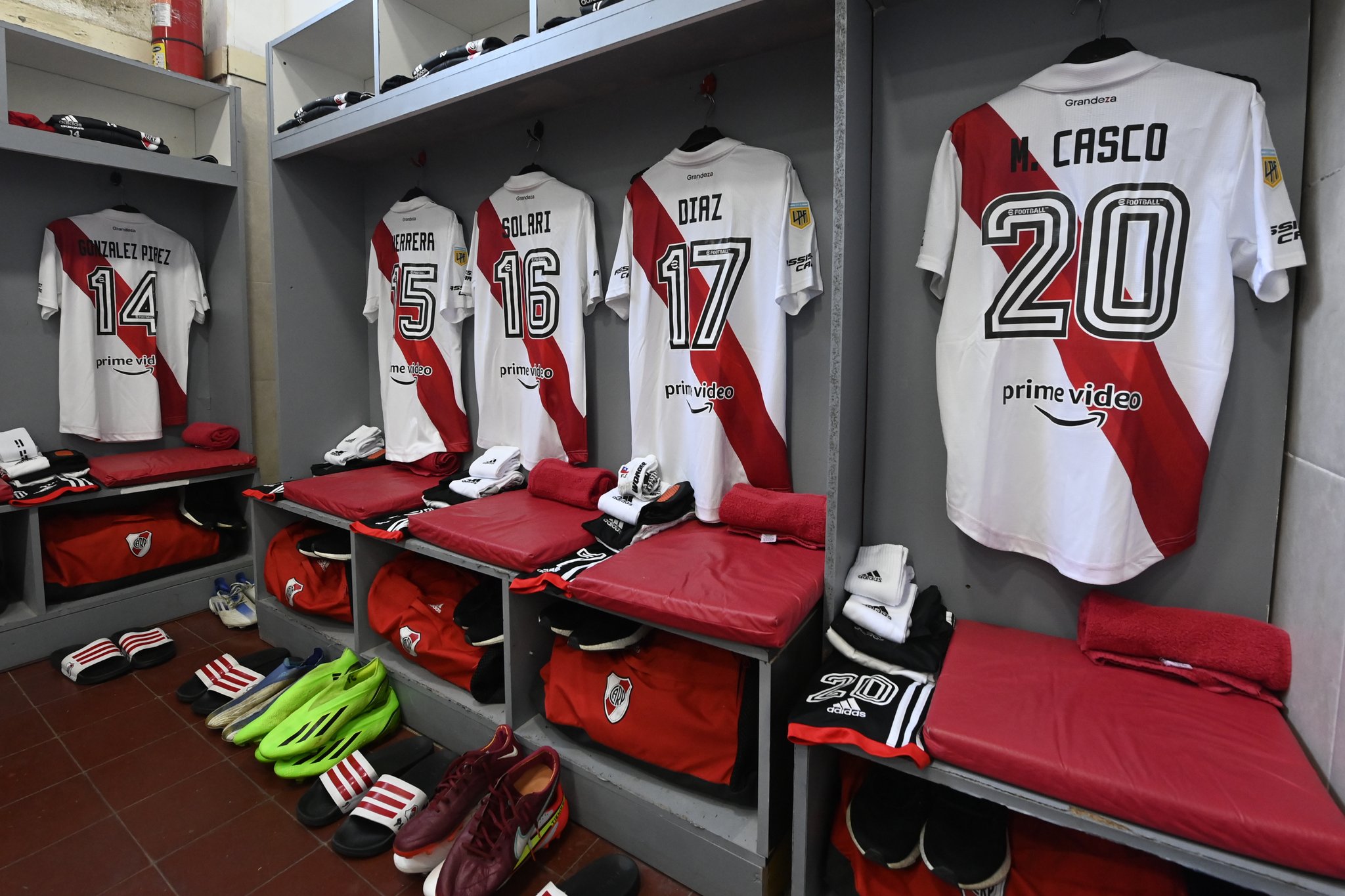 Those of Napoleon will go out with the traditional uniform

This is what the Presbítero Bartolomé Grella stadium looks like. Marcelo Gallardo’s team will seek revenge after being eliminated in the quarterfinals of the Argentine Cup against Patron, who won 4-3 on penalties after drawing 2-2 in 90 minutes. 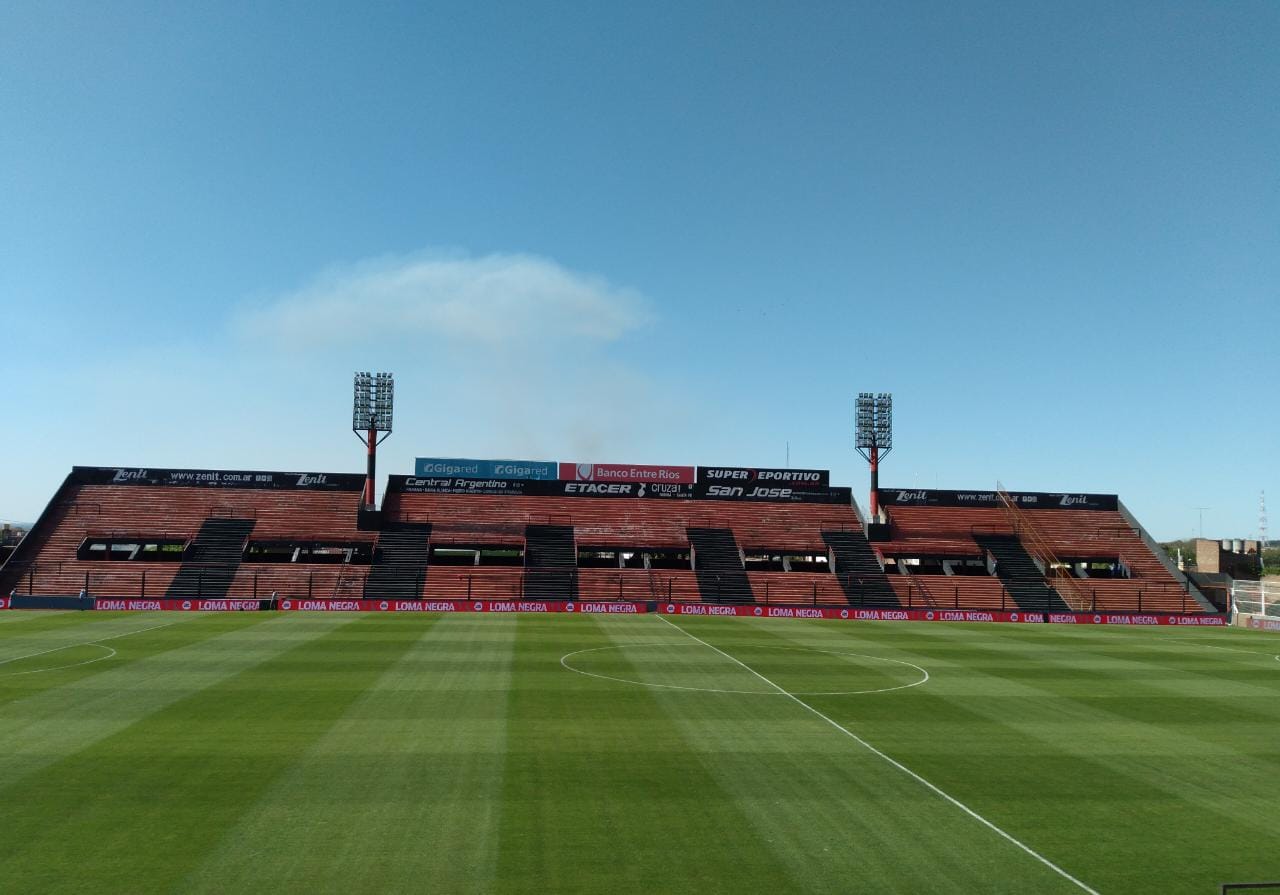 The playing field is impeccable in Paraná

River Plate’s poster prior to the match against Patronato de Paraná for the Professional League. It begins at 8:30 p.m. with arbitration by Patricio Loustau.

The playing field of the Presbítero Bartolomé Grella stadium, where Patronato de Paraná and River Plate will play, looks in perfect condition for the match on date 24 of the Professional Soccer League.

The record between River Plate and Patronato.

For the Professional League, both teams have an absolute parity in their 6 matches. The Millionaire won 3 and the Pattern 3. They never tied.

The last time they met in the league was on November 7, 2021 at the Monumental and Gallardo’s men thrashed 5-0. That afternoon, Julian Alvarez he dispatched with four goals and the rest he scored Agustin Palavecino. 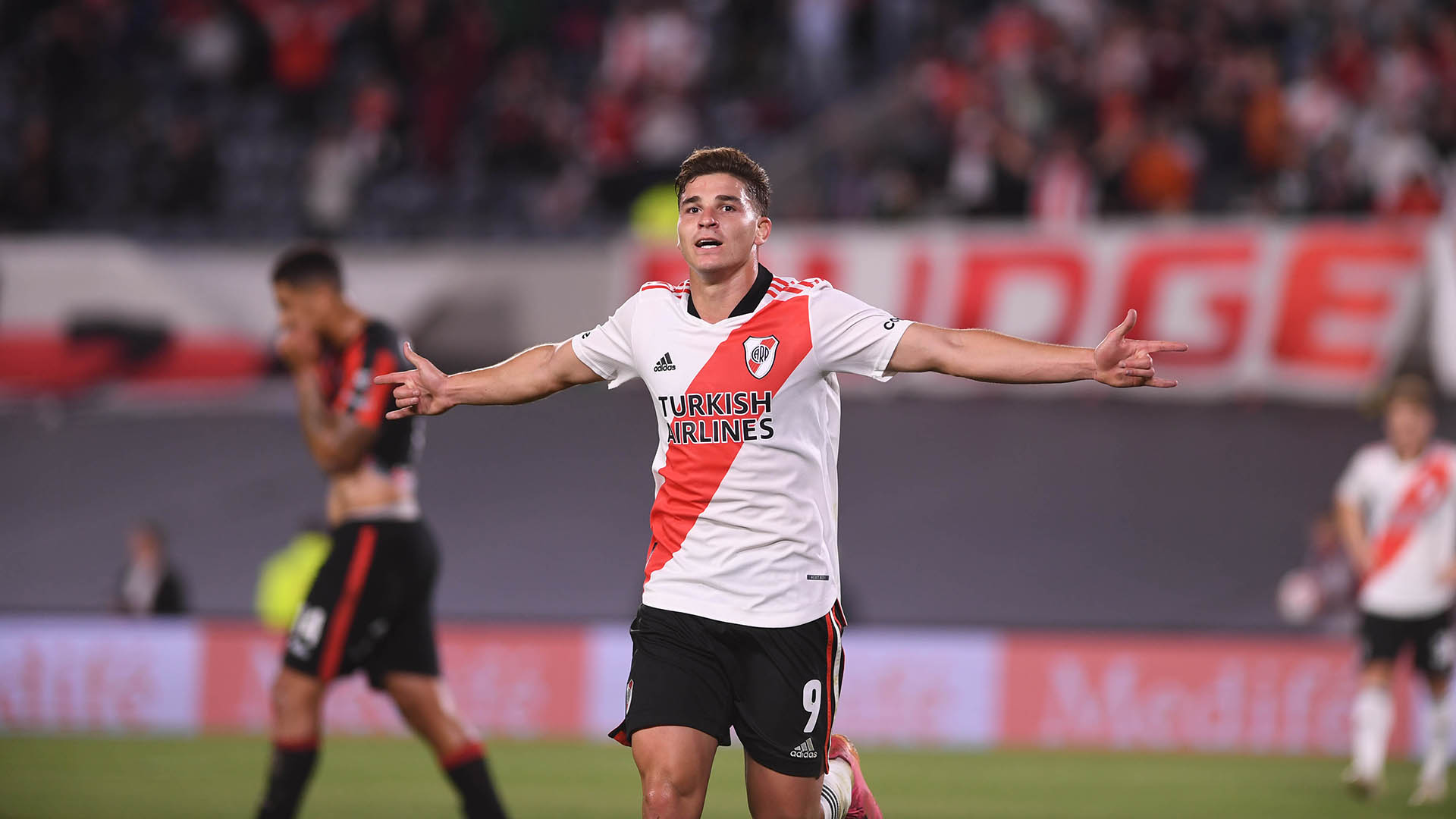 This was the arrival of River Plate in the city of Paraná, where it will be measured against the Patronato at 8:30 p.m. on date 24 of the Professional Soccer League.

The Band delegation was received by a crowd that asked Gallardo and the players for autographs and photos.

When was the last time River Plate and Patronato played?

The memory is not so good for Marcelo Gallardo’s team, since the last time these rivals met was on September 28, 2022 in La Rioja for the quarterfinals of the Argentine Cup.

In the 90 minutes, River and Patronato equalized 2-2 with goals from Bruno Zuculini and Juanfer Quintero for the Millionaire and Marcelo Estigarribia and Jonathan Herrera for the Pattern. On penalties, the Paraná team won 4-3 and advanced to the semis.

During the arrival of the River Plate squad to the city of Paraná, Entre Ríos, there was a gesture of Marcelo Gallardo with a fanatical girl of the Millionaire who ran to hug the coach. The image went viral and showed the public’s love for the Doll, who will probably still be at the club in 2023.

The team of facundo sava It is in the relegation zone in the Professional League and is forced to score points in the final stretch to try to maintain the category.

The Patternwhich eliminated River Plate in the quarterfinals of the Argentine Cup and will be Boca Juniors’ rival in the semis, comes from a 1-0 loss to Colón de Santa Fe as a visitor and on date 22 he had beaten Atlético Tucumán, current leader of the League.

How River Plate arrives at the confrontation with Patronato

The set of Doll It is on the rise after adding two consecutive victories. He scored eight goals in his last two appearances (three against Argentinos Juniors and five against Estudiantes at the Monumental) to reach 38 points in the competition and be one step away from qualifying for the 2023 Copa Libertadores in the general table (67). .

In what is strictly football, Gallardo will not be able to count on Lucas Beltran for tonight’s duel in Paraná. The former Colón de Santa Fe striker suffers from fatigue in his right hamstring and will be preserved. His place in the front line will be taken by Paul Solari.

In this way, the rest of the surnames that will seek a new victory will be the same ones that took the field in the victory against Pincha during the week. Frank Armani will be in the bow; The defense will be made up of Andres Herrera, Emanuel Mammana, Paulo Diaz and Milton Casco. midfielders will be Enzo Pérez, Juan Fernando Quintero, Nicolás De la Cruz and Agustín Palavecino. And in the attack they will play the Colombian Miguel Borgia and the aforementioned Solari. 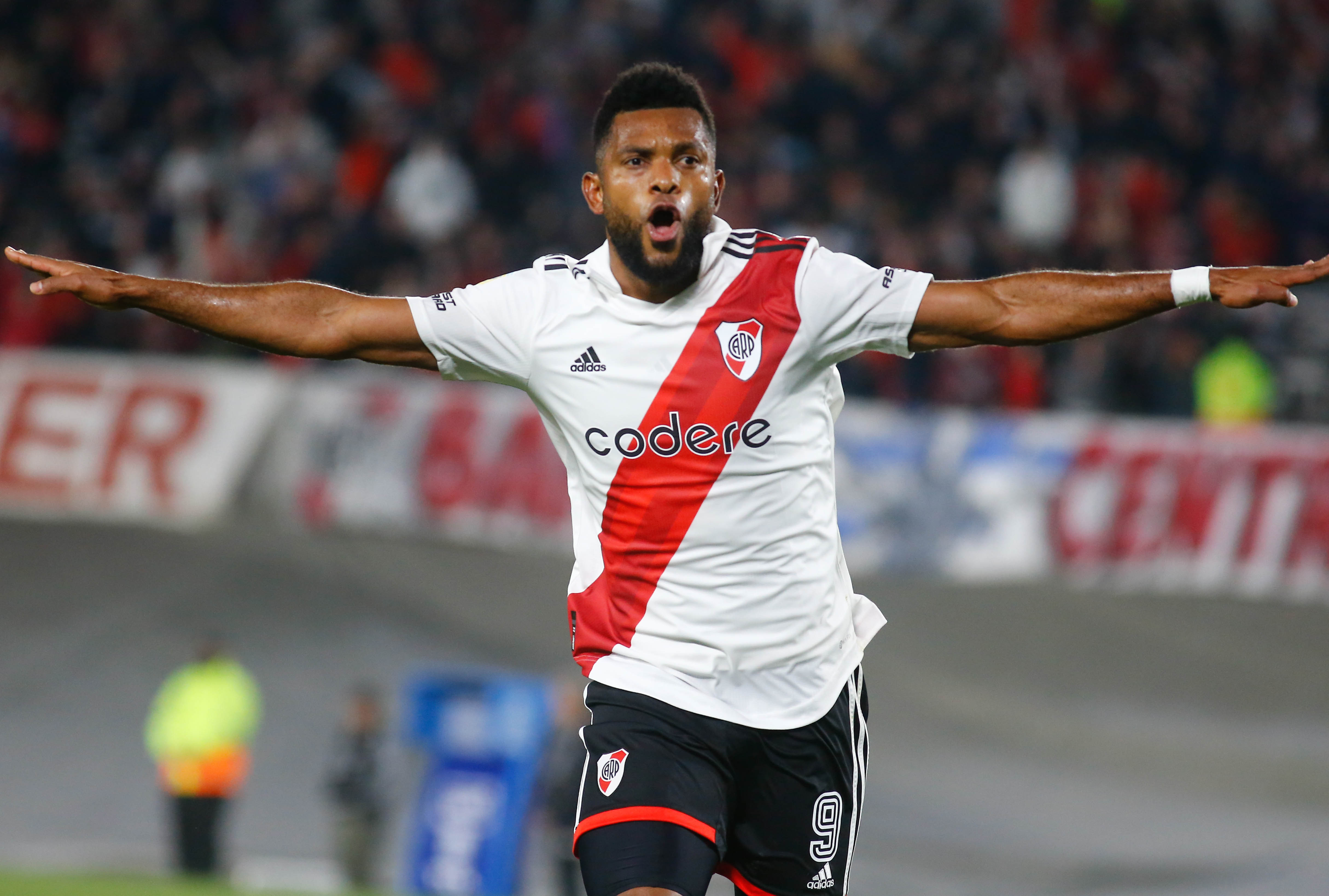 facundo sava summoned 23 footballers for the duel against River Plata at the stadium Presbyter Bartholomew Grella.

The game can be followed by ESPN Premium and for the platform Star+.

The list of soccer players that Marcelo Gallardo chose to visit Paraná.

This is the table of positions of the Professional League: the Millionaire is located in the fifth position, while the Patron is in the 13th position.

At what time do Patronato and River Plate play: 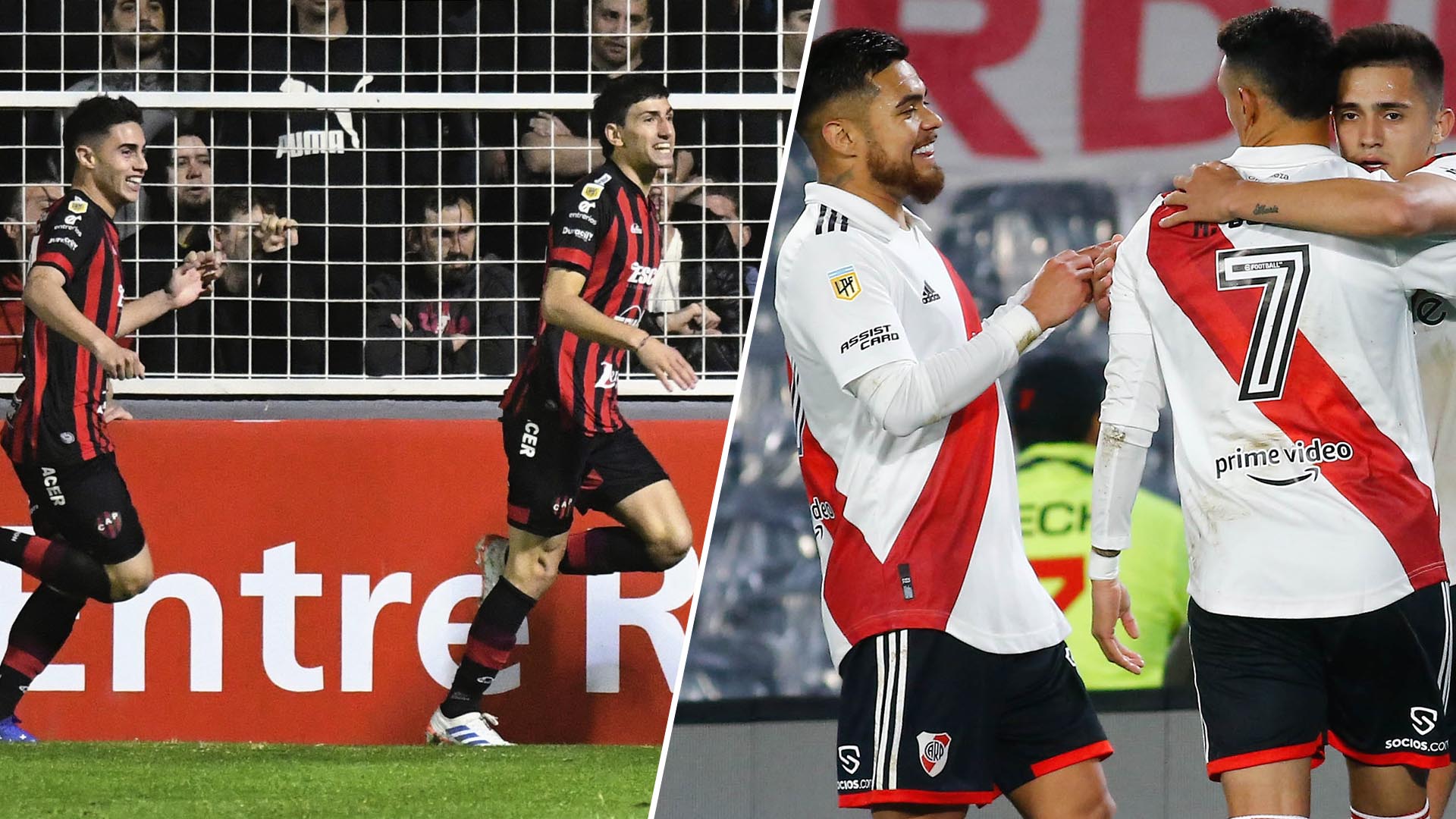 Not all news on the site expresses the point of view of the site, but we transmit this news automatically and translate it through programmatic technology on the site and not from a human editor.
Sara Adm2022-10-10
Facebook Twitter LinkedIn Pinterest WhatsApp

Trump botched his ‘coup’ by not going to Capitol on Jan. 6, says expert on autocrats

The best serrated knives for slicing a tomato

How bad are hot dogs for you and how many are too many?

China seeks to unify public opinion in support of Russia