After an error in Platense’s exit, Nicolás De La Cruz puts the Millionaire ahead, who does not get out of the fight for the Professional League.

The second half started

El Millonario is looking for the three points that will keep him with chances of fighting for the title of the Professional League.

Three changes in River Plate for the complement

Marcelo Gallardo sent Simón, Beltrán and Matías Suárez to the field instead of Palavecino, Quintero and Borja.

Platense ends up leaving a better image in the first stage. Good pressure at the start of River Plate, which is very imprecise. They go into the break level with no goals.

Borja is booked and will miss the next match at home

Hard entrance of the Colombian on Baldassarra. The striker reached the yellow limits and will miss the duel against Rosario Central.

Agustín Palavecino perked up and almost scored with a strong mid-distance shot. On the way, the ball deflected and went just over the crossbar.

In less than 20 minutes Marcelo Gallardo’s team received two yellow cards. The second was for Marcelo Herrera. 50% of the last local line was conditioned.

Ignacio Schor received a severe blow to the shoulder and had to abandon the engagement. Omar De Felippe sent Juan Cruz Esquivel to the field instead of the Bird.

The first suggestions were for the Millionaire through the good punch of Juanfer Quintero. The Colombian was in charge of supplying Miguel Borja and Nicolás De La Cruz to threaten Marcos Ledesma.

River and Platense began the duel with great intensity. Emanuel Mammana received the first yellow card for a violent infraction against Conejo Benítez.

The teams take to the field!

The protagonists are already on the pitch. Franco Armani received a warm recognition for having exceeded 200 games with the River Plate shirt.

The protagonists of both teams leave the field of play to finalize the details in the locker room. In moments the game begins. 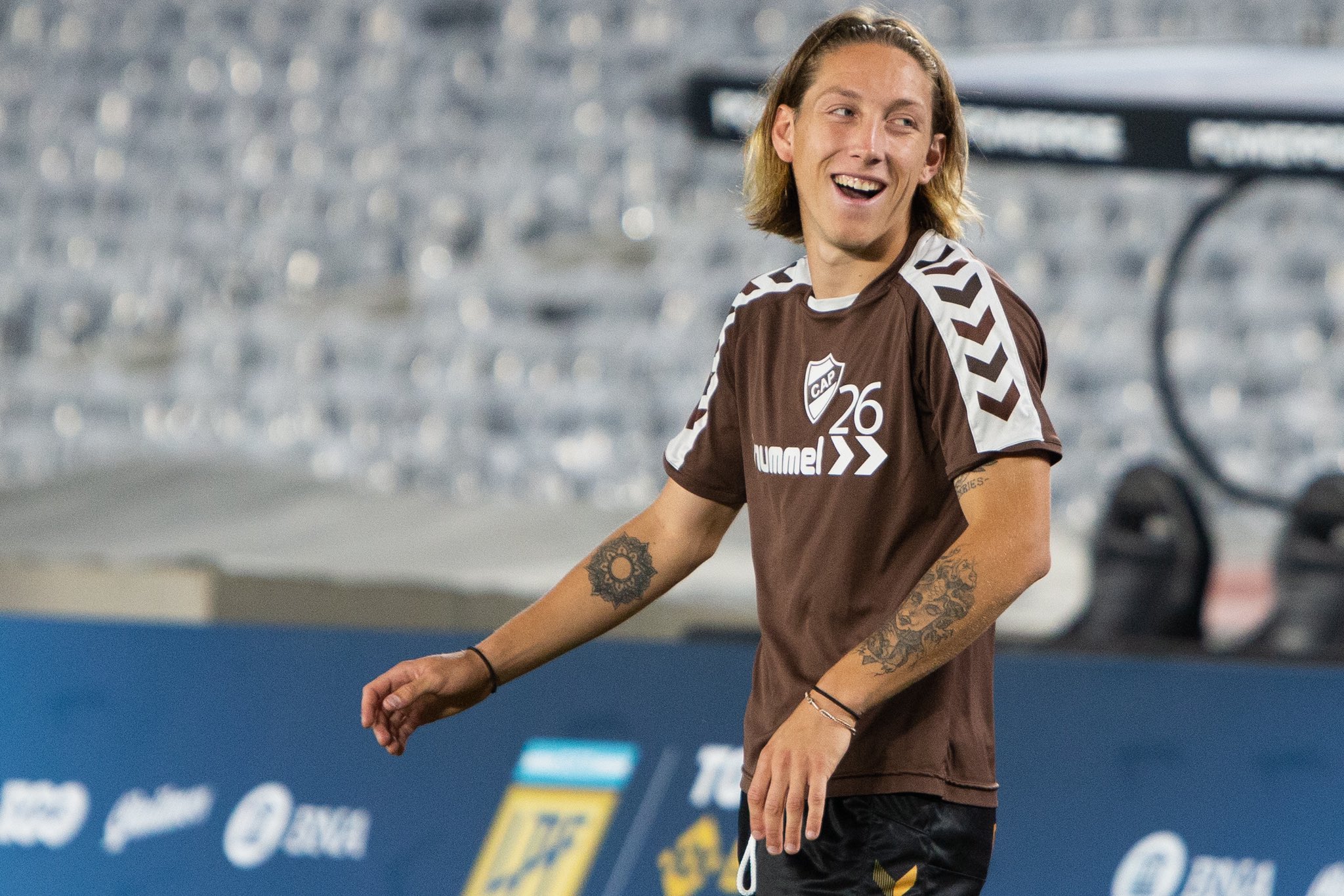 The expectation increases and the fans continue to enter the Monumental. At 9:30 p.m. the show will begin. 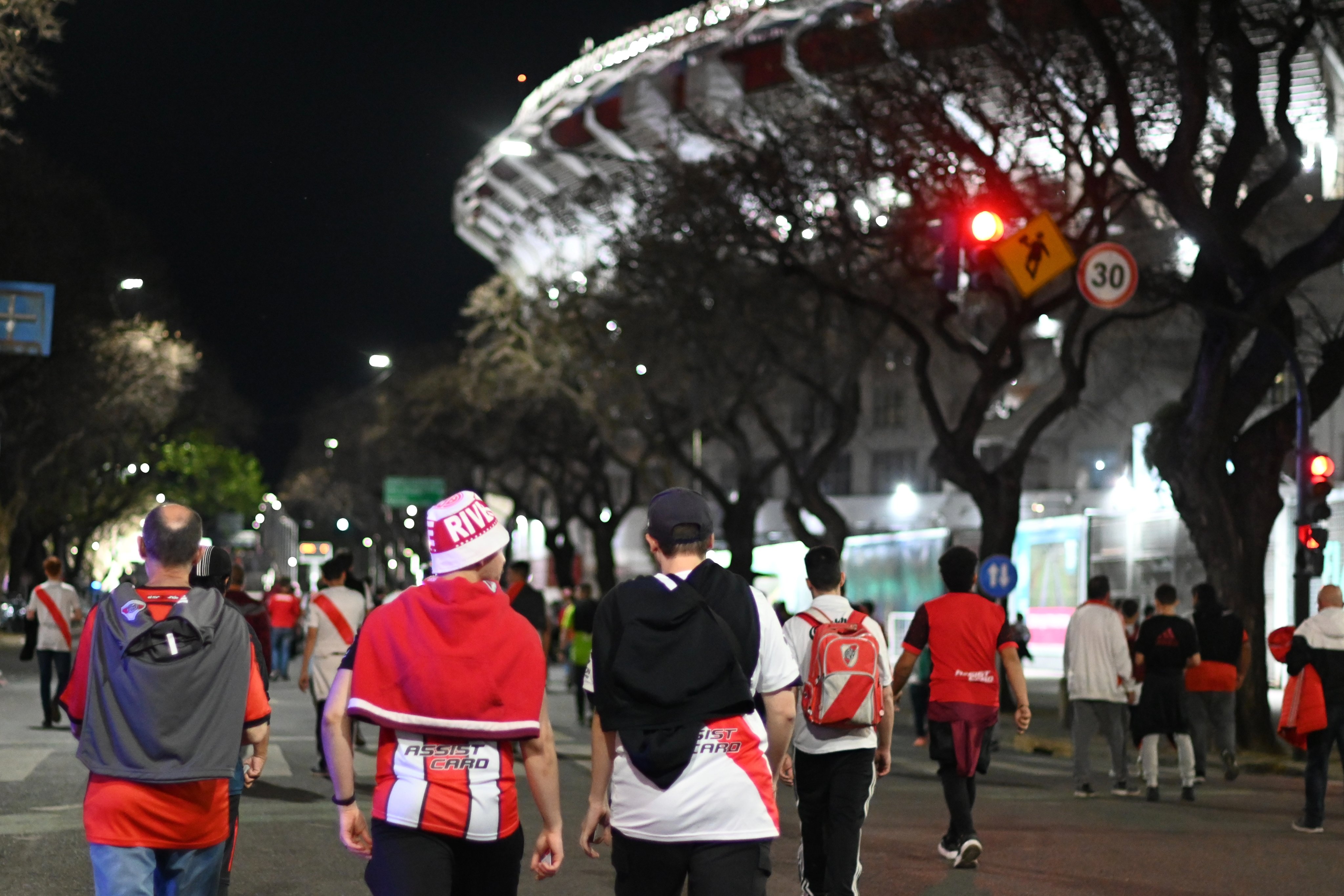 The fans will fill the mythical Buenos Aires stadium

Marcelo Gallardo once again trusts Colombian society in the attack. 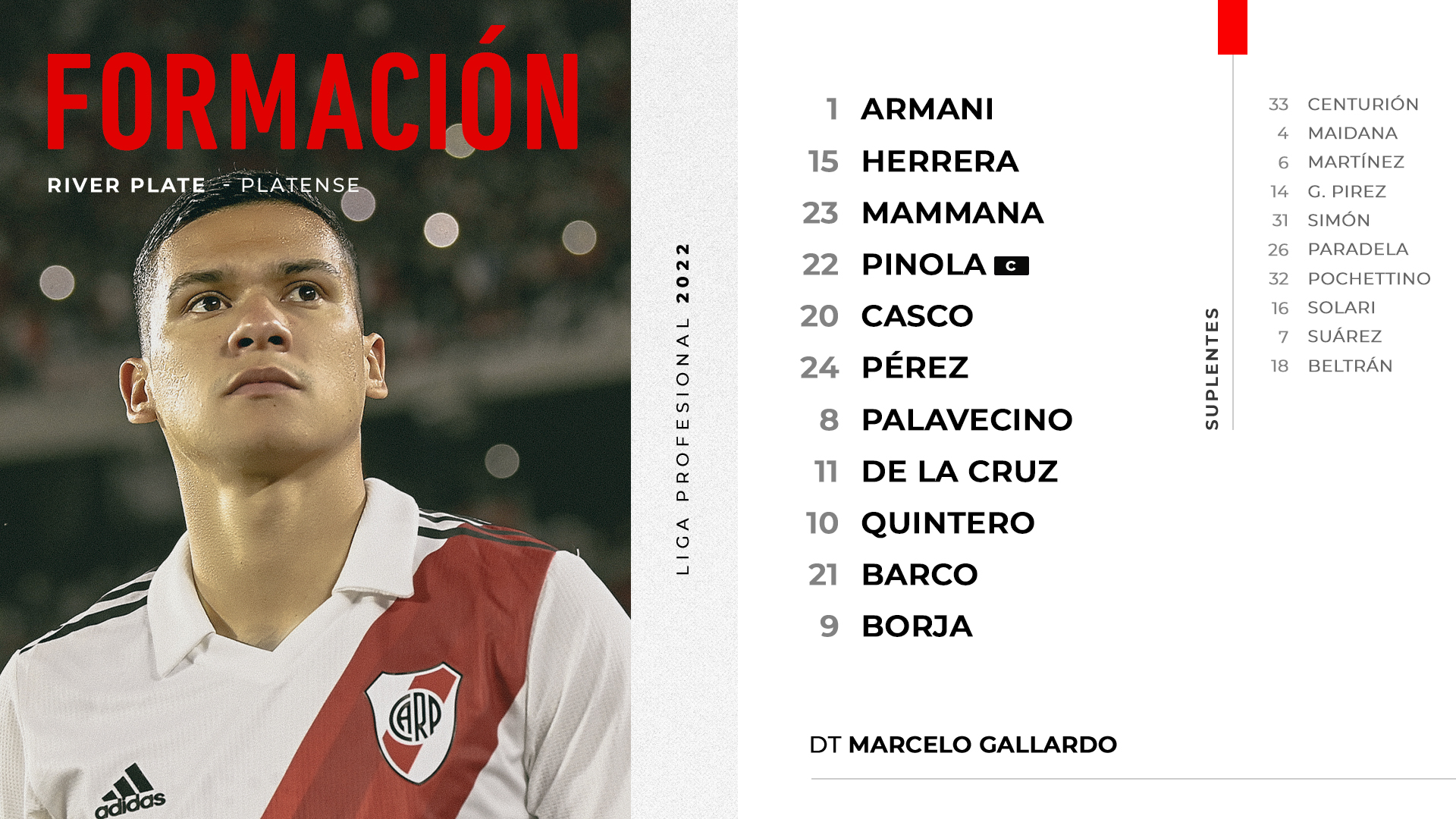 The Doll will present these eleven to face the Squid

The forms are posted on the door of the visiting locker room. Omar De Felippe chose his eleven soldiers to present a tough battle to La Banda. 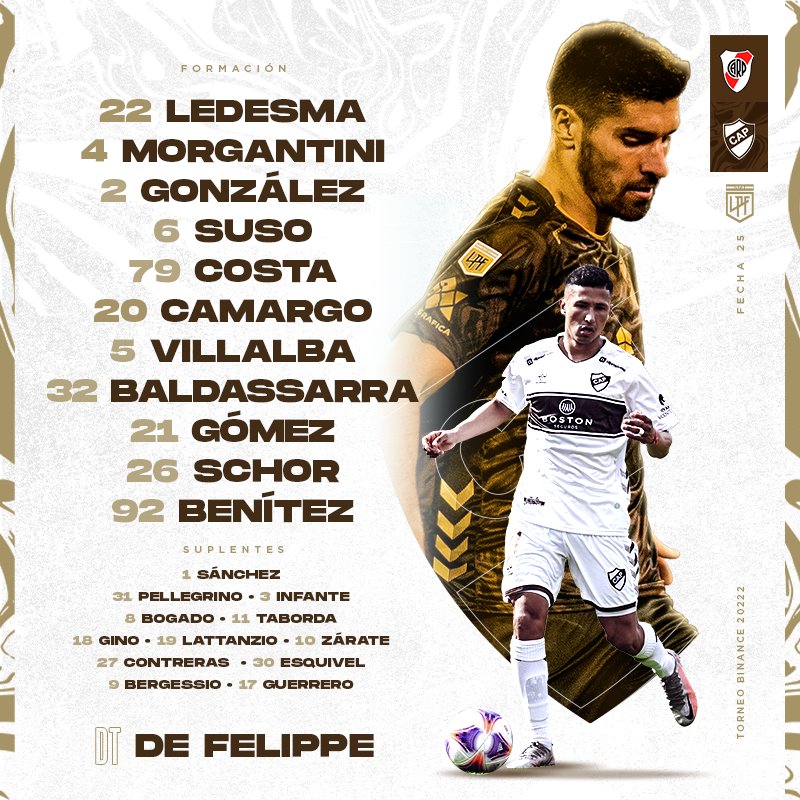 The team that will present Platense at the Monumental

The River Plate delegation passed through the corridors of the Monumental to enter the locker room and begin the pre-competitive work. 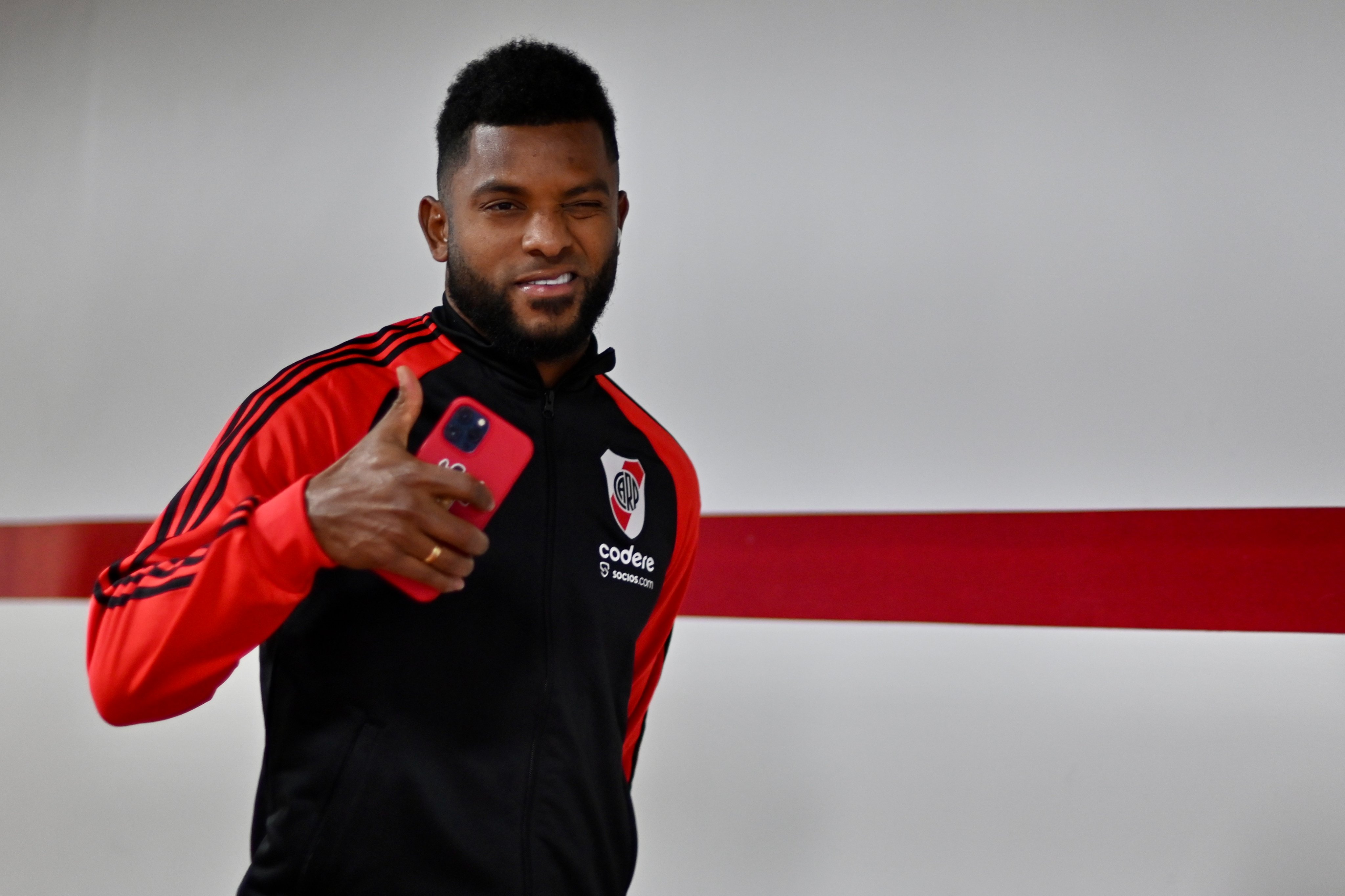 The Colombian wants to convert before his people

Elías Gómez was disaffected from the River Plate concentration because he was a father.

River Plate fans choose which player from the millionaire squad they would take to the World Cup in Qatar, while they wait near the Monumental. 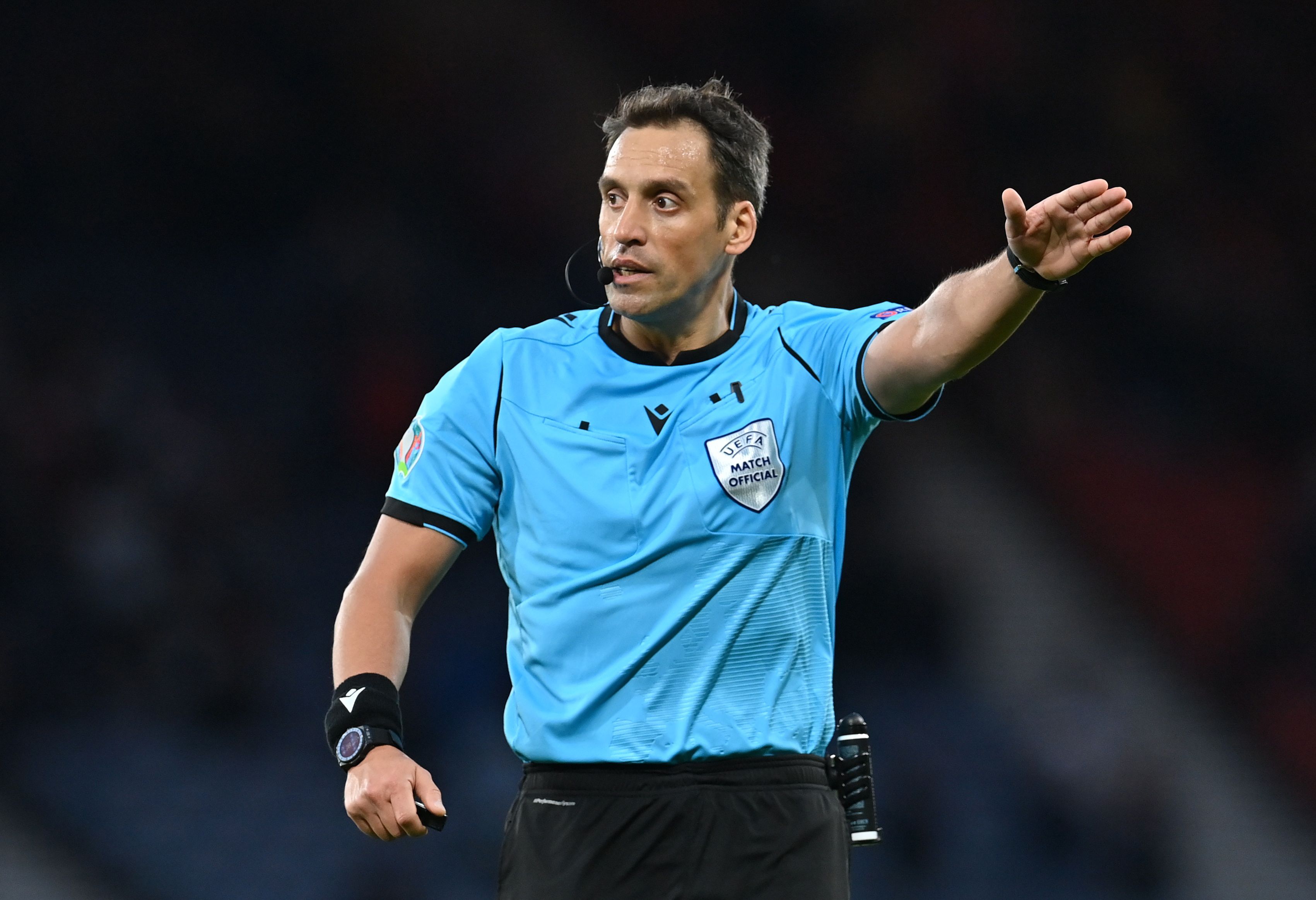 The referee was also appointed for the World Cup in Qatar. Photo: REUTERS/Paul Ellis

It will be the match number 150 in the history of between the Millionaire and the Squid. In the 149 games played so far, River has won 94 times, Platense has done so 24 times and tied the remaining 31. 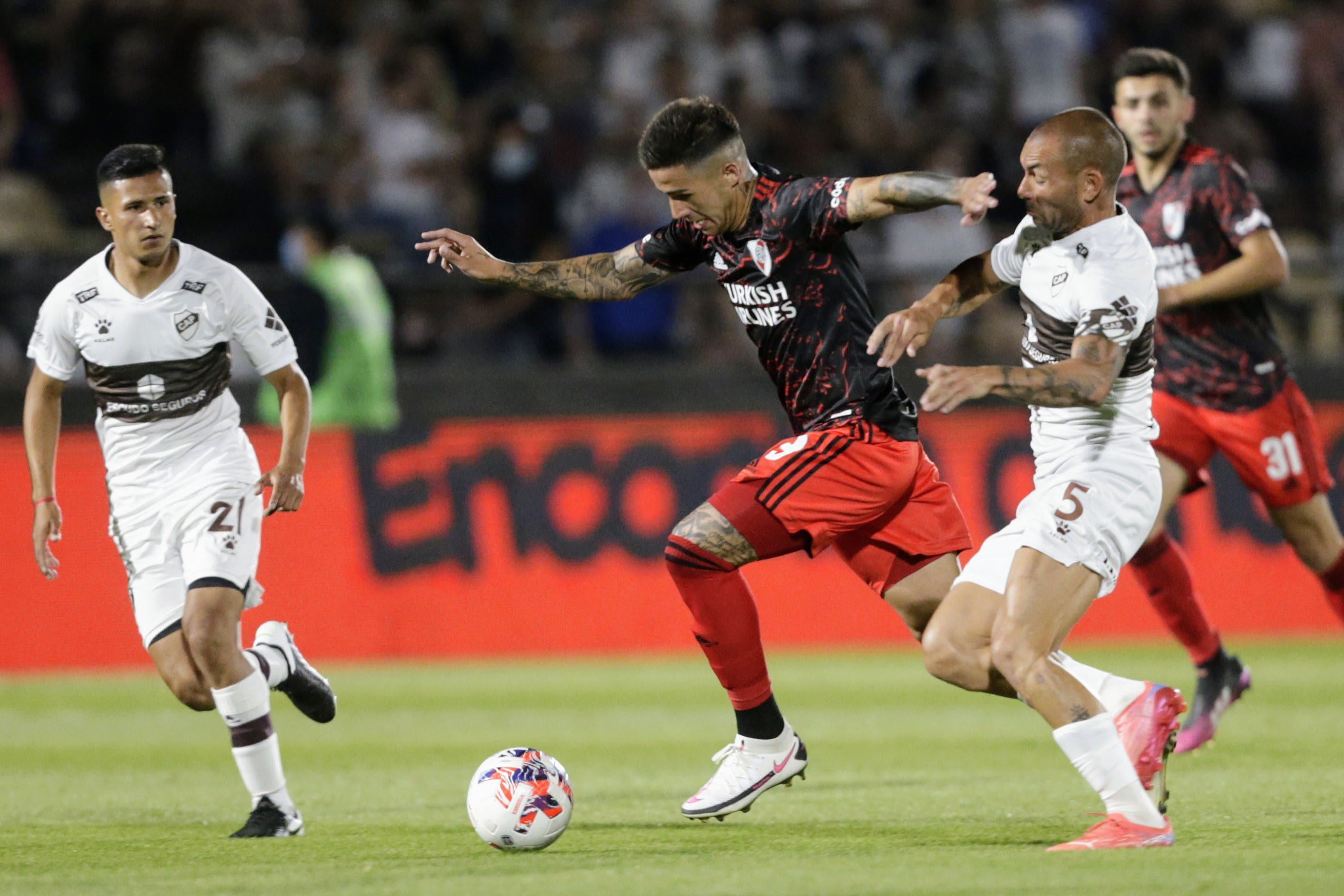 This is the classification for the Cups

*The first four will qualify for the Copa Libertadores

If the games of the amateur and professional era are counted, the Millionaire leads his rival by 66 games, product of 88 wins, 29 draws and only 22 losses in 139 games. 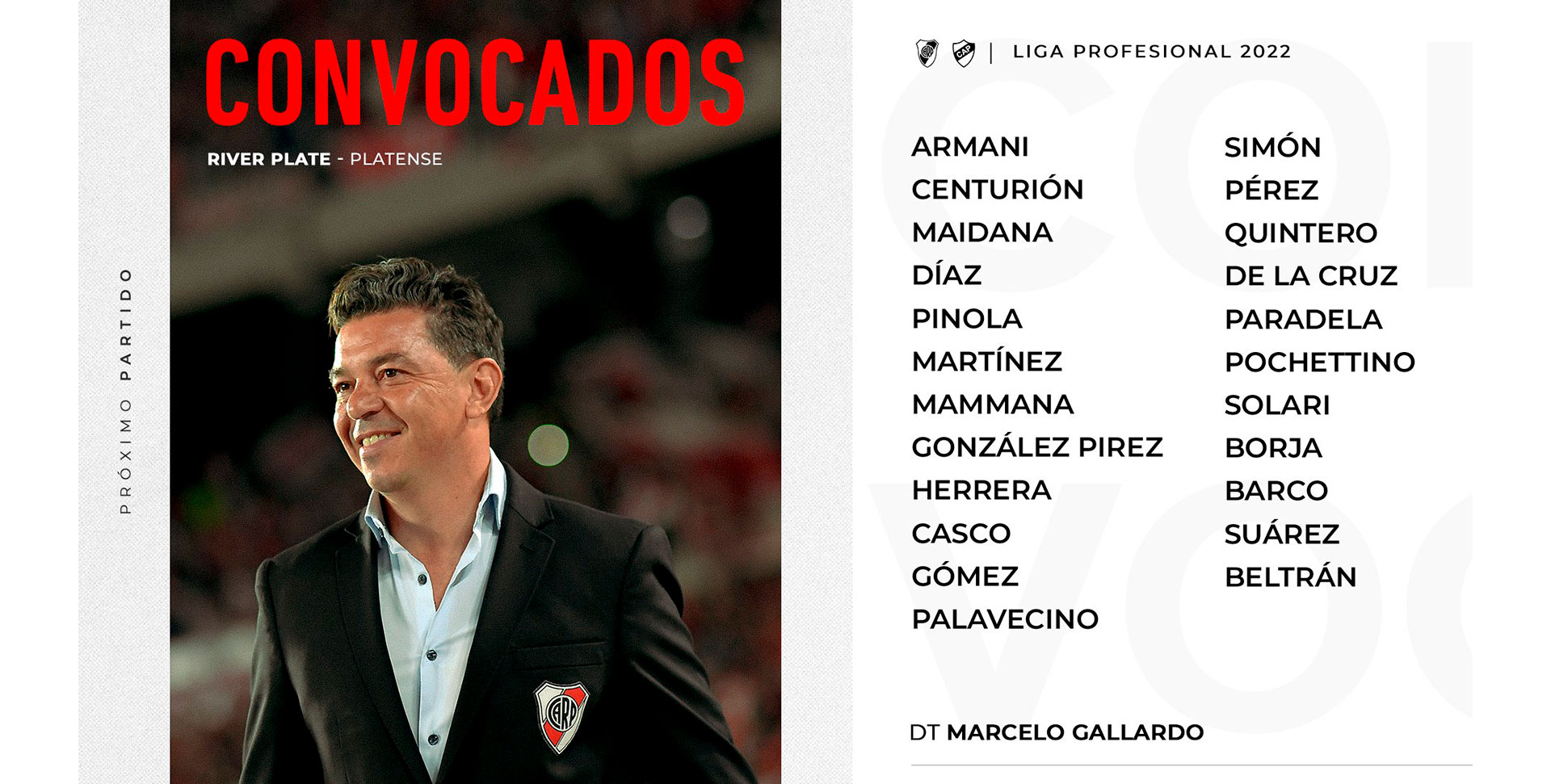 How does River Plate arrive?

River Plate has three wins in a row (Argentinos, Estudiantes and Patronato), which allows it to remain within a shot of the top of the tournament and firmly in the Copa Libertadores zone in the Annual Table.

With a total of 41 points, he appears three behind Racing and Atlético Tucumán and four behind the leader Boca Juniors (before he will face Sarmiento de Junín). In the race for a ticket to the international competition, he accumulates 70 units and leads Gimnasia by six and Argentinos Juniors by eight with three duels to go.

As far as the team is concerned, Marcelo Gallardo will not be able to repeat the formation due to Enzo Pérez’s absence due to injury.

A variant is that Santiago Simón enters and that Nicolás De La Cruz and Agustín Palavecino share the central zone of the middle of the field. Another variant would be the entry of Leandro González Pirez to form a line of five defenders. On offense, Lucas Beltrán bids for a place with Pablo Solari to be Miguel Borja’s companion.

Those summoned from Platense: 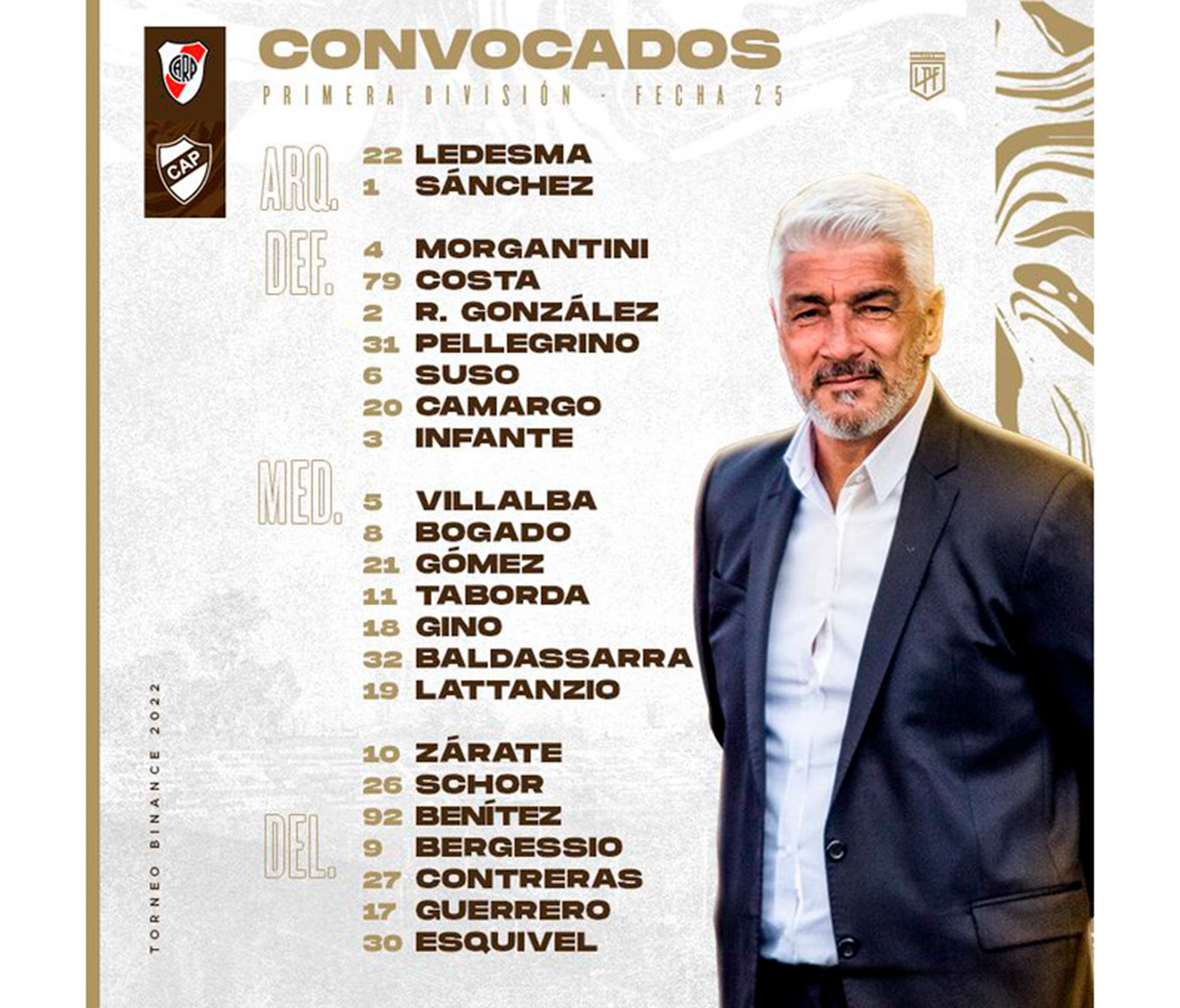 Although he accumulates five games without victories and two defeats in a row (Atlético Tucumán and Colón), Platense achieved his goal and last day he secured his stay next season in the highest category of Argentine soccer. However, the Squid is still complicated with the average and must add to not have problems in 2023.

Omar De Felippe could bet on the same eleven that have just lost to Sabalero at the Ciudad de Vicente López stadium.

Where to watch River Plate vs. Platense?

The match can be seen through the football pack on the TNT Sports channel.

The Millionaire and the Squid will face each other this Wednesday, October 12 at the Monumental Stadium. The main referee will be Fernando Rapallini. The list will be completed by Juan Pablo Belatti and Adrián Delbarba. The person in charge of the VAR will be Pablo Dóvalo and Gerardo Carretero will be in the AVAR.

Welcome to the preview of the match between River Plate and Platense for date 25 of the Argentine Professional League. 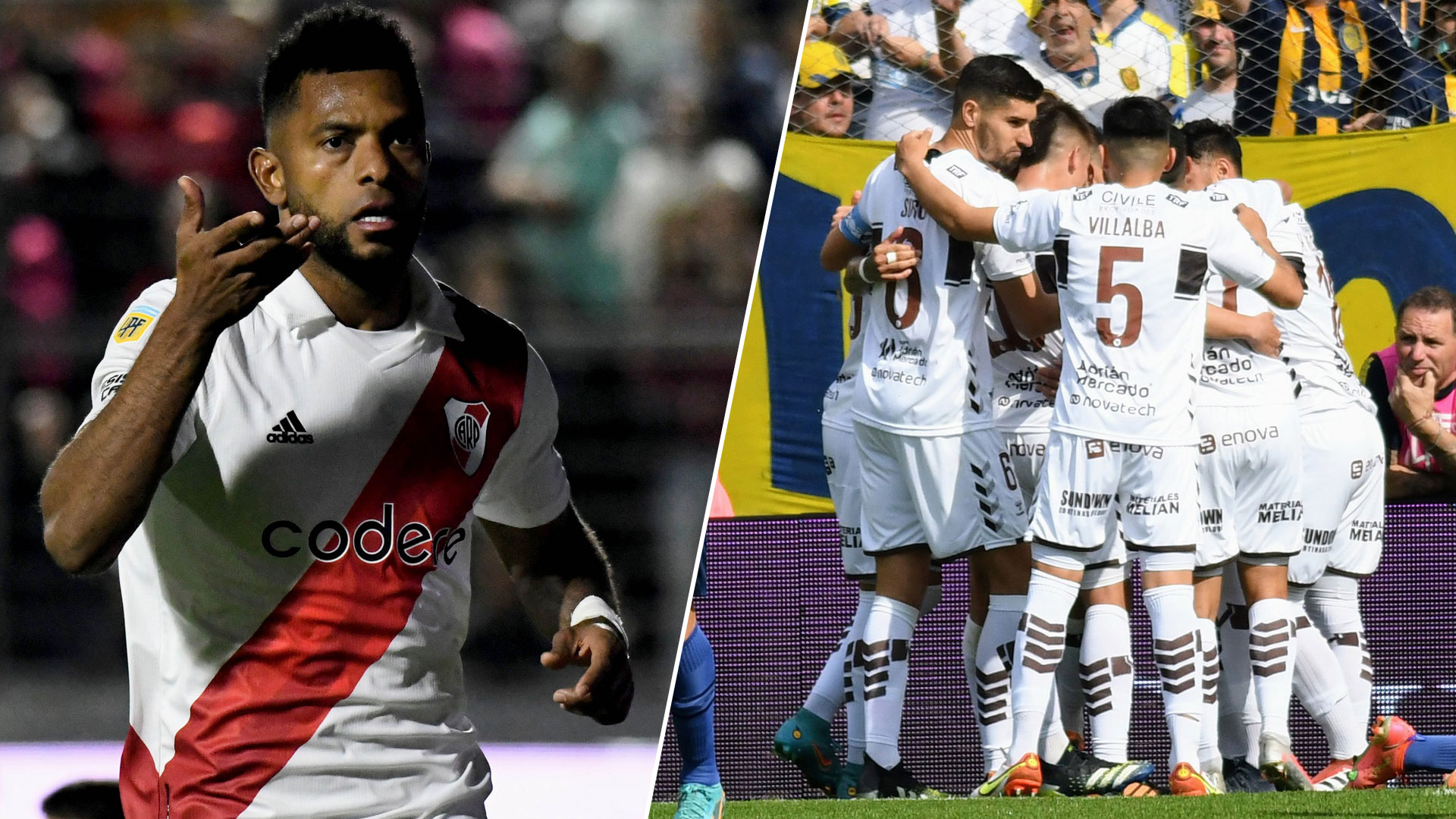 Not all news on the site expresses the point of view of the site, but we transmit this news automatically and translate it through programmatic technology on the site and not from a human editor.
Sara Adm2022-10-13
Facebook Twitter LinkedIn Pinterest WhatsApp

Weather in the United States: the weather forecast for New York this August 14

COVID vaccine for children under 5: here’s what parents need to know