Is there a more famous rivalry in the various codes of Aussie Rules football than Carlton v Collingwood?

Incredibly, after 125 years of clashes since 1897, the two teams were tied with 128 wins each (and four draws) heading into last Sunday’s clash.

While a number of major rivalries exist between Victorian clubs, the Carlton-Collingwood rivalry is so long and deep that supporters of both clubs look forward to their annual clashes, no matter where the teams sit on the ladder.

Collingwood was then an area with many tanneries, breweries and shoe factories and they often recruited Catholics. Rather, Carlton was a secular club in a middle-class suburb largely run by shopkeepers and businessmen.

Such differences have helped shape generalizations (whether accurate or not) within the club and fan rivalry.

The first Grand Final between Carlton and Collingwood (1910) included a huge brawl which led to the suspension of four players for 12 to 18 months at a time when players did not wear individual numbers and court hearings relied on testimonials.

With tough, physical clashes being a feature of Carlton-Collingwood games of this era, both sides gave their all during those difficult years, including during the Great Depression, when massive unemployment and widespread deprivation often meant game-winning matches. the Victorian Football League (VFL) was vital for players to generate income for their families.

Even during Collingwood’s greatest period of 1926 to 1931, which included four successive premierships from 1927 to 1930 and increased his number of premierships to nine from Carlton’s five, Carlton managed to win five of the ten clashes between them.

Again in the 1938 Grand Final, when Carlton overcame a 39-point deficit to beat Collingwood, another major brawl occurred after the siren involving players, coaches and supporters with police reinforcements called in for restore order.

Collingwood’s hatred for Carlton was also fueled by longtime Collingwood coach Jock McHale (1912 to 1949), who often ordered the hot water to be turned off in visitors’ rooms when Carlton played at the home ground. Victoria Park in Collingwood.

Carlton’s Jim Baird, who played from 1941, also recalled the reality of the hot water cut also noting that Collingwood never invited you into the rooms after the game for a drink despite everyone else clubs that did.

Collingwood’s main rival in the 1950s in terms of performance being Melbourne at a time when Carlton’s performance was declining somewhat, the great rivalry was again highlighted by Carlton’s appointment of Melbourne champion Ron Barassi as as captain-coach in 1965.

Barassi was someone who had a hatred of Collingwood due to the Demons’ shock loss to the Magpies in the 1958 Grand Final which prevented Melbourne from equaling Collingwood’s record feat of four successive flags.

While pre-World War II class divisions had given way somewhat by the 1970s, as many moved to expanding outlying suburbs, the Carlton-Collingwood rivalry endured.

Carlton champion ruckman John Nicholls recalled his visits to Victoria Park in the 1960s and 1970s as “a nightmare of a place to go”, that “you had to be wary of where you parked at the in case your car gets vandalized,” and Collingwood fans abuse you on the way to the ground.

Collingwood captain Des Tuddenham also experienced the immense dislike of Collingwood when a lady chased him across Carlton’s home ground in Princes Park shouting “you’re a bastard, Tuddenham”, while a other lady in a different game hit her head with an umbrella. while calling him a “dirty bastard”.

Other events fueled the rivalry in the 1980s and beyond.

During the tenth inning of the 1979 season, a ferocious torso by Collingwood’s Stan Magro knocked out Carlton captain-coach Alex Jesaulenko, who sent him to the hospital.

Still, Carlton overcame a five-goal half-time lead to win again despite Magro also beating Carlton’s Alex Marcou, which resulted in another fight between many players.

A great moment for Carlton fans, but Collingwood’s desperation came in the 1979 Grand Final when Carlton’s Wayne Harmes launched a desperate chase, dove and swept the ball into the front pocket in the final minutes to set up Ken Sheldon for goal from the square. , who sealed the flag as Collingwood fans thought the ball was out of bounds.

After the match, Carlton chairman George Harris took to the microphone at Princes Park during the celebrations to ask the fans “what better than to beat Collingwood by ten goals?” Beat them by five points in a Grand Final!

Carlton’s 1981 Grand Final win over Collingwood, their last Grand Final clash, also overcame a 21-point third-quarter deficit to strike despair among Collingwood fans, who had now suffered 11 losses in the their 12 Grand Final appearances since 1952.

However, during the 1970s and early 1980s, aside from the few clashes that took place at the 78,000-seater Waverley Park, Carlton-Collingwood clashes often saw capacity crowds on the relatively poor suburban grounds where the most of the fans stood during games. 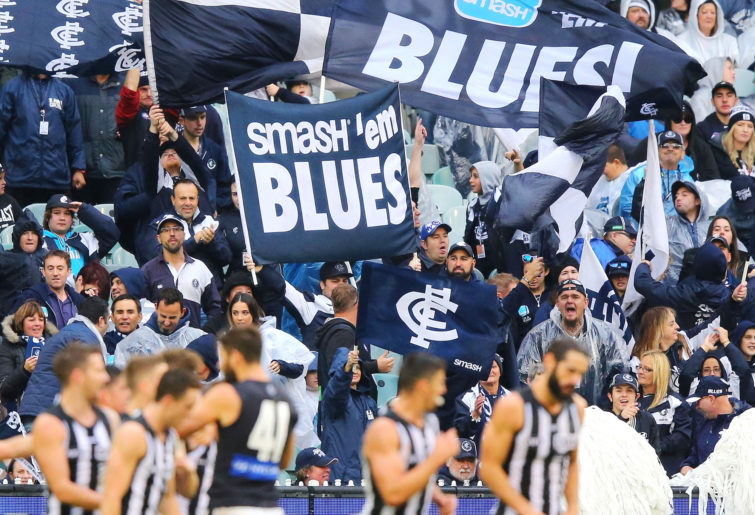 From 1983, of the many Collingwood-Carlton clashes played primarily at Waverley, they drew six of the 20 largest home-and-away crowds at that ground before it closed.

With Carlton-Collingwood, clashes have taken place at the MCG since 1993. Over 70,000 fans attended on 27 occasions, with many of those matches attracting over 80,000 people.

Even when these teams are doing poorly, they still draw quite a good crowd, as evidenced by the second clash of the 2005 season when 48,000 attended despite the bottom and second-to-bottom places on the Australian Football League ladder. (AFL).

The great rivalry between these two clubs was also evident after Carlton was found guilty of deliberate, elaborate and sophisticated salary cap violations in 2000 and 2001.

This led to a huge fine and the club were stripped of several first draft picks in the 2002 and 2003 AFL Drafts, events which ultimately weakened the club for the next six years before the Blues returned. in the final in 2009.

During that dark period from 2002 to 2008 for Carlton, the Blues still managed to beat Collingwood in six out of 14 matches, although Collingwood were clearly the most successful team reaching the final five times.

The battle between these two famous clubs continues.

With last Sunday’s four-point victory giving the Magpies a slim 129-128 lead over Carton after 125 years, this famous sporting rivalry continues to be one of the biggest rivalries in Australian sport.

What do you think?

Not all news on the site expresses the point of view of the site, but we transmit this news automatically and translate it through programmatic technology on the site and not from a human editor.
William2022-06-02
168
Facebook Twitter LinkedIn Pinterest WhatsApp