US President Joe Biden paid his respects to the late Queen Elizabeth II on Sunday when he stood beside her coffin, made the sign of the cross and placed his hand on his heart during a visit to Westminster. London Hall.

He was accompanied by first lady Jill Biden.

AP reports that he stood quietly in contemplation near the coffin after his silent tribute. The Bidens were joined by US Ambassador Jane Hartley.

Biden was also expected to sign the official book of condolences and attend a Sunday reception at Buckingham Palace hosted by King Charles III before attending the state funeral at Westminster Abbey on Monday.

US President Joe Biden and First Lady Jill Biden pay their respects as they view the coffin of Queen Elizabeth II as it lies in state inside Westminster Hall at the Palace of Westminster in London on September 18 2022. (JOE GIDDENS/POOL/AFP via Getty Images) 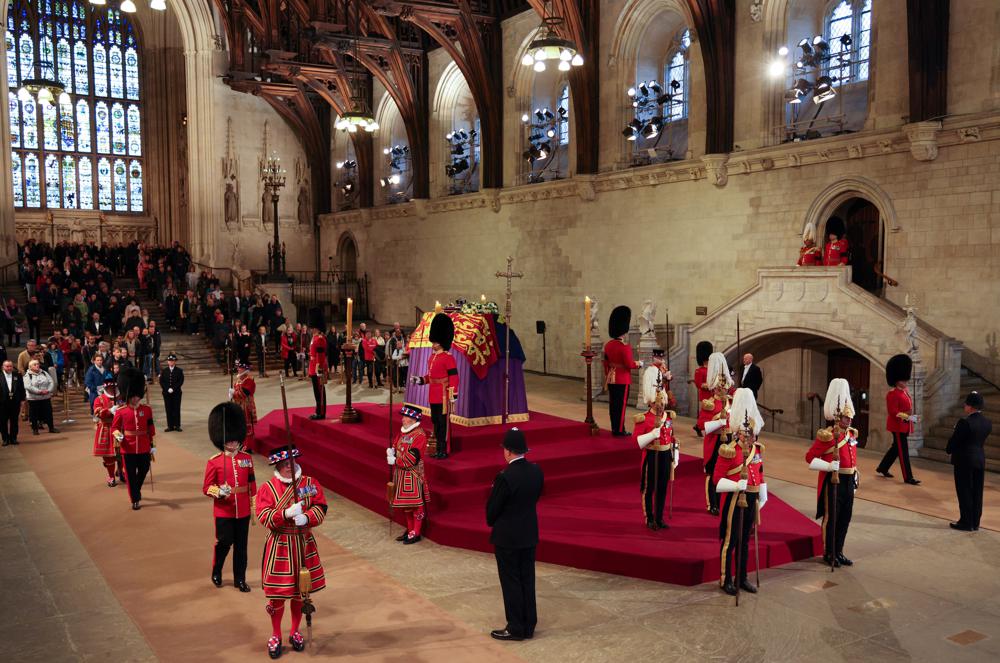 The King’s Bodyguard, made up of Gentlemen at Arms, Yeomen of the Guard and Scots Guards, change guard duties around the coffin of Queen Elizabeth II, lying in state inside Westminster Hall, Palace of Westminster in London, Sunday, September 18, 2022. (Adrian Dennis/Pool Photo via AP)

The visiting president is one of hundreds of world leaders in the capital to pay their respects to the Queen, who died on September 8 aged 96 after 70 years on the throne.

You can watch continued live coverage of visitors paying tribute to Queen Elizabeth II below:

Hundreds of thousands of other mourners waited for hours in a queue to pass the Queen’s coffin.

London’s transport authority said it was preparing for around a million people to visit central London on Monday for the state funeral of Queen Elizabeth II.

Transport for London chief Andy Byford said on Sunday the capital had seen “a huge number of additional passengers” since the Queen’s death on September 8. But he said demand would “climb” on Monday, AP reports.

Across the country, some 250 additional rail services will run, including night trains.

Not all news on the site expresses the point of view of the site, but we transmit this news automatically and translate it through programmatic technology on the site and not from a human editor.
William2022-09-18
187
Facebook Twitter LinkedIn Pinterest WhatsApp

Earthquakes in Turkey and Syria kill more than 2,500: NPR