BETHLEHEM, West Bank — President Joe Biden, visiting the West Bank on Friday, reaffirmed his continued support for “two states for two peoples,” but acknowledged that “the ground is not ripe” to relaunch stalled talks aimed at achieving to an elusive peace between Israelis and Palestinians.

His comments came during a joint appearance in Bethlehem with Palestinian Authority President Mahmoud Abbas, where he announced $201 million for a United Nations agency that supports Palestinian refugees.

“The Palestinian people are suffering now,” Biden said. “You can just smell it. Your grief and your frustration. In the United States, we feel it.

Biden said they “deserve a state of their own that is independent, sovereign, viable and contiguous. Two states for two peoples, both of whom have deep and ancient roots in this land, living side by side in peace and security.

Although such a goal “may seem so far away”, he said he would not give up on the peace process.

“Even if the ground is not ripe at this time to restart negotiations, the United States and my administration will not give up on bringing Palestinians and Israelis together, on both sides,” he said.

Abbas, in his own remarks, said “the key to peace” in the region “begins with an end to the Israeli occupation of our land.” He said Israel “cannot continue to act as a state above the law” and said the killers of Palestinian-American journalist Shireen Abu Akleh “must be held accountable”.

Abu Akleh was shot dead in an Israeli military raid in the West Bank in May, and US officials say she was likely killed unintentionally by Israeli troops. However, they did not say how they came to this conclusion, and the result has angered many Palestinians, including his family, who accuse the US of trying to help Israel shirk its responsibilities. .

He called his death a “tremendous loss to the essential work of sharing the story of the Palestinian people with the world.”

Palestinian journalists wore black T-shirts with Abu Akleh’s picture and placed a poster of her on an empty chair in the room where the leaders spoke.

An image of slain Palestinian-American journalist Shireen Abu Akleh is placed on a chair, during a press conference by Palestinian President Mahmoud Abbas and US President Joe Biden, in Bethlehem, in the Israeli-occupied West Bank. Photo by Evelyn Hockstein/Reuters

Earlier Friday, Biden appeared in East Jerusalem at the Augusta Victoria Hospital, which serves Palestinians, to discuss financial assistance for local health care. He has proposed $100 million, which requires US Congressional approval, plus smaller amounts for other assorted programs.

Israel has also pledged to upgrade wireless networks in the West Bank and Gaza, as part of a broader effort to improve economic conditions.

“Palestinians and Israelis deserve equal measures of freedom, security, prosperity and dignity,” he said at the hospital. “And access to health care, when you need it, is essential to living a dignified life for all of us.”

After Biden finished speaking, a woman who identified herself as a pediatric nurse at another health facility thanked him for the financial assistance but said ‘we need more justice, more dignity’ .

Biden’s trip to the West Bank has been met with skepticism and bitterness among Palestinians who believe he has taken too few steps toward reviving peace talks, especially after President Donald Trump sidelined them while heavily favoring Israel. .

The last serious round of negotiations aimed at creating an independent Palestinian state failed more than a decade ago, leaving millions of Palestinians to live under Israeli military rule.

The outgoing government of Israel has taken steps to improve economic conditions in the occupied West Bank and Gaza. But Yair Lapid, the interim prime minister, has no mandate to conduct peace negotiations. The November 1 elections could also bring to power a right-wing government opposed to a Palestinian state.

Meanwhile, 86-year-old Abbas, whose Palestinian Authority administers parts of the occupied West Bank and cooperates with Israel on security, is more representative of the status quo than of Palestinian aspirations.

His Fatah party lost an election and control of Gaza to the Islamic militant group Hamas more than 15 years ago. He canceled the first national elections since last year – blaming Israel – as Fatah appeared to be heading for another landslide defeat. Polls over the past year have consistently shown that almost 80% of Palestinians want him to quit.

Biden acknowledged earlier on the trip that a two-state solution won’t happen “in the short term.” The United States also appears to have accepted defeat in its more modest effort to reopen a Jerusalem consulate serving Palestinians that was closed when Trump recognized the disputed city as Israel’s capital.

Palestinian leaders also fear being further undermined by the Abraham Accords, a diplomatic vehicle for Arab nations to normalize relations with Israel despite the continued occupation. Biden, who arrives in Saudi Arabia later Friday to attend an Arab leaders’ summit, hopes to expand that process, which began under Trump. 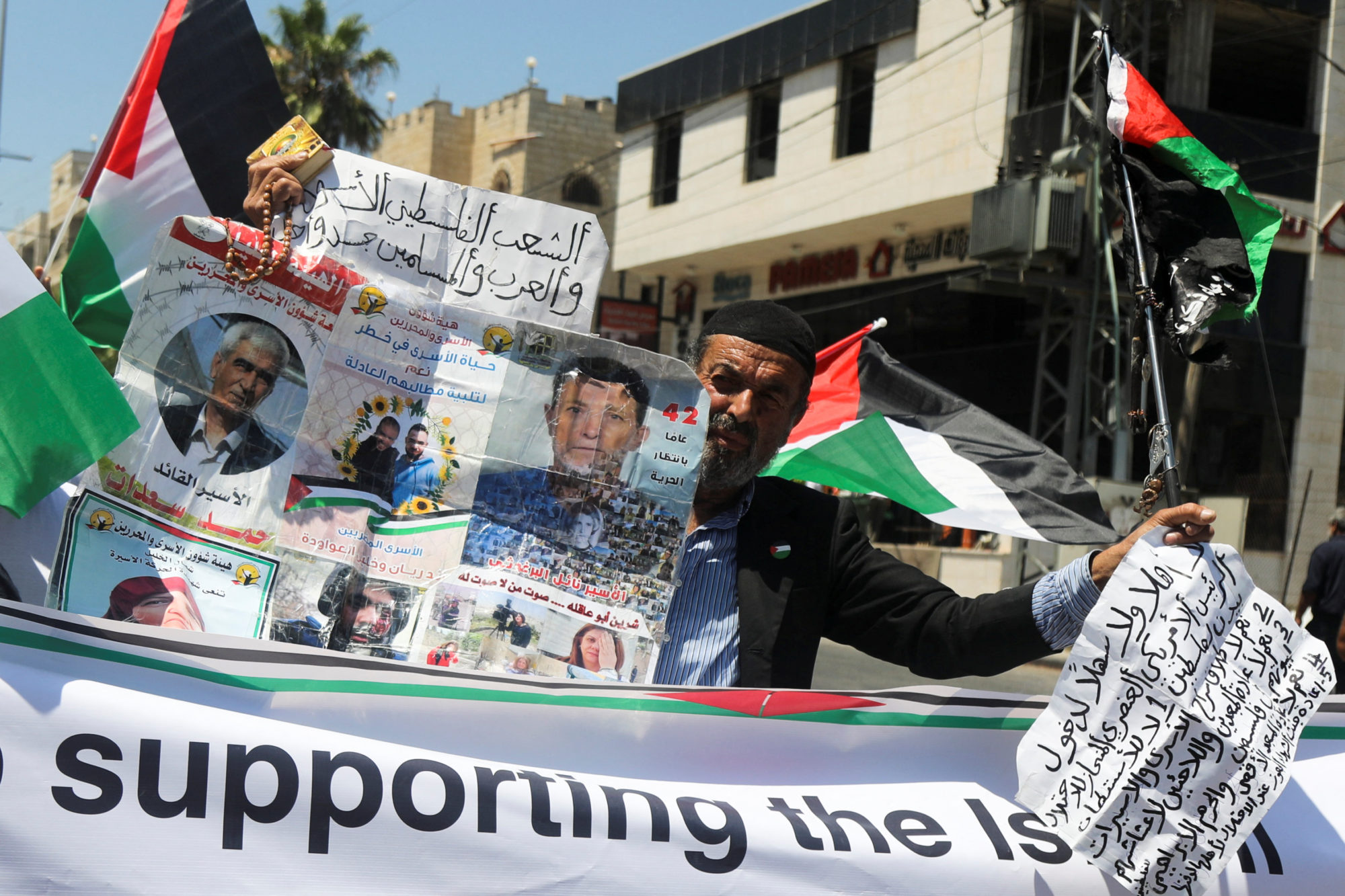 A Palestinian takes part in a protest against US President Joe Biden’s visit to Bethlehem, at the Dheisheh refugee camp near Bethlehem in the Israeli-occupied West Bank. Photo by Raneen Sawafta/Reuters

Hours before Biden became the first US leader to fly directly from Israel to the kingdom, Saudi Arabia’s General Civil Aviation Authority announced that it had opened the kingdom’s airspace to all air carriers that meet authority requirements for overflights.

It marked the end of its long-standing ban on Israeli flights over its territory — a gradual step toward normalizing relations between Saudi Arabia and Israel that was welcomed by Biden.

There was virtually no mention of the Palestinians in the past two days as Biden showered Israel with praise, portraying it as a democracy that shares American values. During a press conference with Biden, Lapid invoked the American civil rights movement to portray Israel as a bastion of freedom.

It all reeked of hypocrisy for the Palestinians, who have endured 55 years of military occupation with no end in sight.

“The idea of ​​shared values ​​makes my stomach ache,” said Diana Buttu, a Palestinian lawyer and political analyst. “I don’t think Israeli values ​​are something people should strive for.”

Both Biden and Lapid have said they support an eventual two-state solution, but their approach, often referred to as “economic peace,” has limits.

The Palestinian goal of an independent state in East Jerusalem, the West Bank and Gaza – territories seized by Israel in the 1967 Middle East war – seems further away than ever.

Israel is expanding settlements in annexed East Jerusalem and the West Bank, which are now home to some 700,000 Jewish settlers. Palestinians view the sprawling, suburban-like settlements as the main obstacle to peace, as they carve up the land on which a Palestinian state would be established. Most of the world considers settlements illegal.

Well-known human rights groups have concluded that Israel’s seemingly permanent control over millions of Palestinians amounts to apartheid. One such group, Israel’s own B’Tselem, hung banners in the West Bank that were visible from the presidential motorcade.

Israel rejects the label as an attack on its very existence, even though two former Israeli prime ministers warned years ago that their country would be treated as such if it failed to reach a two-state deal with the Palestinians . The United States also rejects the apartheid allegations.

Not all news on the site expresses the point of view of the site, but we transmit this news automatically and translate it through programmatic technology on the site and not from a human editor.
Eleon2022-07-15
Facebook Twitter LinkedIn Pinterest WhatsApp

Texas Gov. Abbott: No plans to send migrant buses to Philadelphia at this time