IGL share price: Shares of Indraprastha Gas Ltd (IGL) jumped as much as 4% on Wednesday after the company’s earnings beat expectations on all fronts – profit, revenue, EBITDA and margin. Meanwhile, Jefferies, which has a “buy” call on IGL shares, cut its target price by 24% to Rs 450.

Shares of Indraprastha Gas Ltd (IGL) jumped as much as 4% on Wednesday after the company’s earnings beat expectations on all fronts – profit, revenue, EBITDA – a measure of operating profitability – and margin.

Here is an overview of the company’s finances: 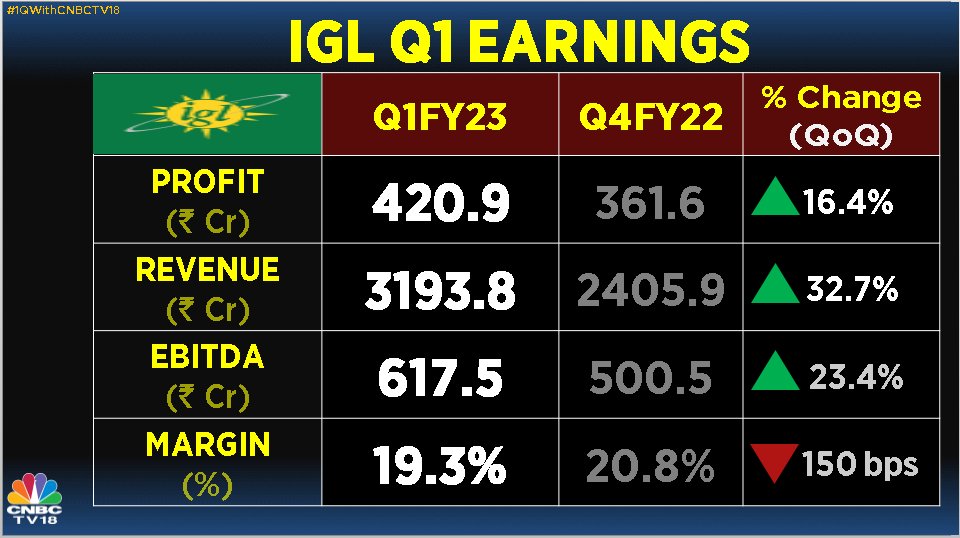 Jefferies has a ‘buy’ call on IGL shares and has cut its target price by 24% to Rs 450. The brokerage firm believes the gas company’s margin is likely to come under pressure in the second quarter. IGL reported 9% EBITDA, led by a better margin.

IGL has enough margin to raise prices, Jefferies said while adding that it expects the gas retailer to defend its margin.

Last week, the company raised the price of piped cooking gas (PNG) for household kitchens in the nation’s capital and nearby towns. The PNG price was raised by Rs 2.63 per unit to “offset the cost of entry gas”, marking the second increase in less than two weeks. On July 26, rates were revised by Rs 2.1 per standard cubic meter (scm).

IGL, the company that retails CNG to automobiles and piped cooking gas to households in the nation’s capital and nearby towns, informed via a tweet that piped cooking gas in Delhi will now cost Rs 50.59 per standard cubic meter. Previously, it was Rs 47.96.

“There are challenges, there are pressures coming from the cost side and we expect it to be above Rs 7 for the whole of this year, but, going forward, since CNG gas prices and PNG will increase again from October 1, this is a challenge that all City Gas Distribution (CGD) companies in the country are facing,” said Sanjay Kumar, Managing Director of IGL.

Besides, IGL plans to add 70 to 75 CNG stations in this fiscal year and hopes to add them as the gas company is making good progress in these stations, Kumar pointed out.

However, the foreign brokerage firm cut its earnings per share estimates for FY23 by 10% and FY24 by 9%.

UBS’s reasoning for firing investment banker in 2018 was defamatory, according to Finra rules

Nasdaq honors Juneteenth with our continued commitment to equality