The Desklab 15.6″ IPS 4K Portable Touchscreen Monitor is a solid choice to consider if you’re looking for a high-performance second display that you can easily take with you.

It is not a brand new product. Rather, it’s the latest iteration of monitor setups based on an innovative concept released about two years ago.

The Desklab monitor does more than turn a cell phone into a big-screen gaming monitor or a temporary workstation when no computer is available. Its usefulness goes far beyond this scenario.

It works from PCs running Microsoft Windows, macOS, Linux and Chromebooks (Chrome OS). Best of all, it’s compatible with game consoles, as well as Android and Apple devices, and tablets.

Desklab has entered the growing portable monitor market competing with a price range from around $200 to three times that amount. Engineers began developing and designing the monitor in June 2018. The project entered its Kickstarter fundraising campaign in October 2019. First deliveries began in early 2020.

Unlike most other portable monitors, some with smaller panels, Desklab’s unique design factor is its clutter-free, plug-and-play design concept that eliminates the need for dongles, multiple cables, and additional software to work with a limited framework. of devices.

Desklab does not need gadgets or accessories. In addition, it is configuration-free and lightweight.

The viewing area is framed on three sides with a 1/4″ black bezel. A 1-1/4″ base extends across the bottom. The all-black metal case is firm and has no flex when held.

The thicker casing at the base is necessary to house the additional circuitry and components that drive the internal features that make this portable monitor so useful. The base also houses two hi-fi speakers for round and full immersive stereo sound.

I tested the portable monitor with a variety of laptops and Chromebooks. The Desklab monitor speakers matched or exceeded the listening quality for speech and music reproduction.

On the bottom right edge of the base, when viewed from the front, are a Mini HDMI port, two USB-C ports, and a Micro-USB port that may be needed to plug in AC power if the laptop, desktop, or the tablet connected to it is not supplying enough juice.

There is no microSD slot. On the bottom left edge of the base are a 3.5mm headphone jack, a jog wheel button for accessing settings, and the on/off button.

Powerful to a Flaw

Perhaps a design consequence of making this unit thinner and lighter led to not providing an onboard battery. In theory, this secondary monitor is powered by connected devices.

However, this may limit portability if the connected device does not generate enough power to run both devices or if there is no AC power source nearby. This is a common result I encountered when testing the Desklab monitor.

Use of this monitor without the included AC power supply depends on the connected computer. Not all devices provide enough power through the USB-C port.

I had little success powering the Desklab monitor attached to most of my many office laptops. Some computers dimly lit the laptop screen. A few others turned on and off inadvertently, even though the laptops themselves were plugged into a wall outlet.

As long as I had the Desklab portable monitor powered by a wall outlet, its screen was always bright. Its performance and features make it the only monitor connected to a desktop computer.

Unless the connected device can supply power from the USB-C port, a second cable must power the portable monitor connected to an AC outlet.

A second issue I encountered with this portable viewing device was its flimsy included stand.

The wider base is not heavy enough to support the monitor positioned upright or at any angle. For that, you need the included flexible vinyl-covered (presumably metal) stand that sticks to the back panel of the monitor.

The product information states that the mount is magnetic. This may have been the case with earlier models. However, that doesn’t seem to be what’s expected in the current model.

Two strips of double-sided tape provided hold the mount in place. Two creases in the stand allow me to position the monitor at different angles. This provided less than ideal robustness.

Especially when placed on a smooth surface, the panel is not confidently stable. I resorted to using a piece of tape and/or reinforcing the bottom edge of the collapsible stand to keep its tripod shape from collapsing.

When not in use as a stand, the crinkle fabric folds over the top and front of the panel to cover the glass screen. It is convenient to protect the portable monitor when carrying and storing it.

However, I’d rather the stand serve strictly as a carrying case or monitor cover and attach a more rigid and reliable metal stand. Previous Desklab models provided the foldable stand as an additional purchase. The website was unclear as to the availability of an alternate mount for this panel.

This portable monitor offers a suite of office and entertainment features grouped under the frame base. These functions are built-in and work without any user intervention.

These make the portable panel plug and play. Other than adjusting the screen to your specific needs, no hardware and software configuration is required.

Similar to navigating the standard monitor controls, pressing the Desklab’s wheel button opens a pop-up window in the lower left corner of the panel. Use the wheel to select the settings you want to adjust. These include image brightness, color elements, audio, etc.

The Desklab has settings to mute the speakers and adjust the volume. Computer audio settings allow me to select computer speakers or Desklab audio. When using the laptop display’s built-in speakers, I could adjust its volume levels with the computer’s dedicated keyboard keys.

It didn’t work for adjusting the panel screen brightness though.

The viewing angle of the panel is 178 degrees. It’s crystal clear when tilted next to a laptop. Its luminance is 400 nits.

Here is a short list of some of the most impressive specs and features that come standard with the Desklab monitor:

A few caveats exist. The portable monitor works on PCs, Macs, and various Chromebook models I have. Attached to a PC and recent Chromebooks, I could use the portable Desklab as a touchscreen.

It doesn’t when connected to a Mac I borrowed for testing and an aging, underpowered Chromebook. The portable monitor also worked on an iPad that I borrowed.

The availability of the touch screen depends on the type of connection the computer has as well as the components of the computer.

If the connected device is not already touch-enabled, Desklab’s touch function may not be compatible. For example, MacBooks are not touchscreen compatible.

With other devices, connecting via the HDMI port will only provide an input/output display signal. To enable touch functionality, connect the Desklab monitor to the computer via a USB 3.0 A to USB-C cable or a USB-C to USB-C cable.

For simultaneous power and data transfer, use one USB-C cable for data transmission and another USB-C cable for power. If power is not coming from the computer to turn on the Desklab, use the included AC power cable and power supply.

I was very pleased with the usefulness and performance of the Desklab portable monitor.

It duplicates all the computing tasks I normally do with a second desktop monitor attached to my primary desktop laptop.

This setup also brings a full-size keyboard and mouse via a docking station. The Desklab monitor has made all this productivity possible on the go without the docking station and other accessories.

Without fault of Desklab, my current Moto G Stylus 5G smartphone does not provide a signal to the external monitor. Not all smartphones do this. But my otherwise out of order Samsung Galaxy S8+ phone connects just fine. 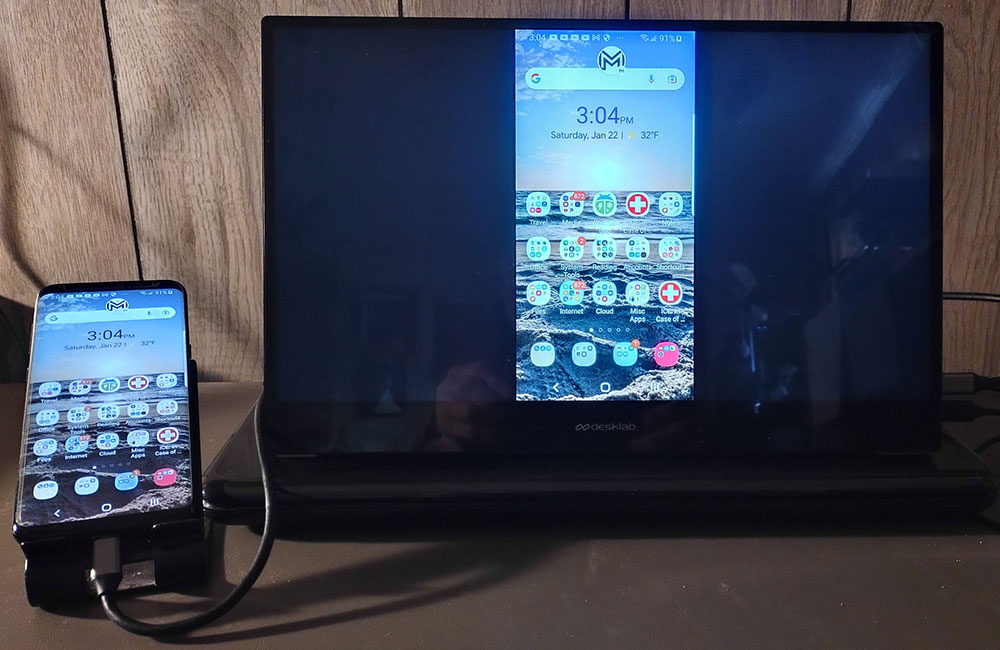 Add a portable wireless keyboard and convert your phone into a full-screen display of emails and apps.

This Desklab portable monitor is available on the manufacturer’s site for $399.00, down from its original price of $700. I haven’t found it elsewhere.

The Moto E32s India launch date is scheduled for May 27; Rendering, specs leak