Breitbart Texas observed the migrants crossing the river several miles north of Eagle Pass just after a period of rain in 40-degree temperatures. Most of the migrants were single adult men and women. Mixed in with the groups of mostly Cuban nationals were several family units with young children. A group of nearly 100 people marched along a busy highway leading from Eagle Pass to Del Rio, Texas.

A group of migrants near Eagle Pass walk along a busy highway in search of law enforcement. (Randy Clark/Breitbart Texas)

In September, a migrant was killed and several others, including a toddler, were seriously injured in the same area when a motorist left the roadway hitting the group. On Saturday, the limited number of Border Patrol and local law enforcement officers available to respond meant the parade of migrants marching along the highway was not escorted by authorities. 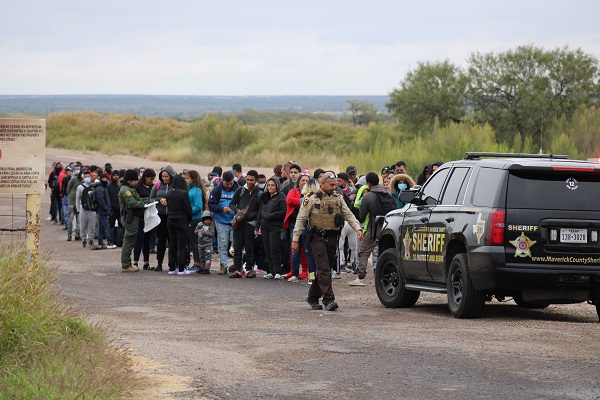 Groups of migrants crossing the Rio Grande by the hundreds have become an almost daily occurrence in this region. Earlier this month, nearly 800 migrants crossed Eagle Pass within hours. As temperatures dip into the 30s due to a recent cold front, migrants began crossing closer to mid-morning rather than just before sunrise.

On Tuesday, DHS Secretary Alejandro Mayorkas testified before the House of Representatives regarding the threats facing the United States. Along with leaders of the National Counterterrorism Center and the FBI, Mayorkas was asked directly about security along the southern border.

Republican Rep. Dan Bishop asked Mayorkas if he still believed the border was secure. In response, Mayorkas told the congressman “Yes, and we are working day by day to improve his security, congressman.”

The statement comes after the department of Mayorkas saw record levels of arrests of migrants across the southwestern border. In fiscal year 2021, more than 1.6 million migrants were apprehended at the border. The annual total topped any other in history for migrant apprehensions.

This record was broken in 2022 when more than 2.2 million migrants were stopped crossing the United States in the 9 Southwest Border Sectors. Most of the migrants who surrendered to authorities on Saturday are expected to be released according to a CBP source.

The migrants, mostly Cuban nationals, are not subject to deportation from the country under the CDC’s COVID-19 Emergency Title 42 authority, which is set to expire Dec. 21.

Randy Clark is a 32-year veteran of the United States Border Patrol. Prior to his retirement, he served as the Division Chief of Law Enforcement Operations, directing the operations of nine Border Patrol Stations in the Del Rio, Texas area. Follow him on Twitter @RandyClarkBBTX.

Not all news on the site expresses the point of view of the site, but we transmit this news automatically and translate it through programmatic technology on the site and not from a human editor.
William2022-11-20
228
Facebook Twitter LinkedIn Pinterest WhatsApp

These Black-Owned New York Businesses Are Leading the Way