The IPL said Edmeades’ collapse was due to low blood pressure; the British auctioneer was leading the IPL auction for a fourth consecutive season when he fell from his podium position; Edmeades thanked the fans for their support 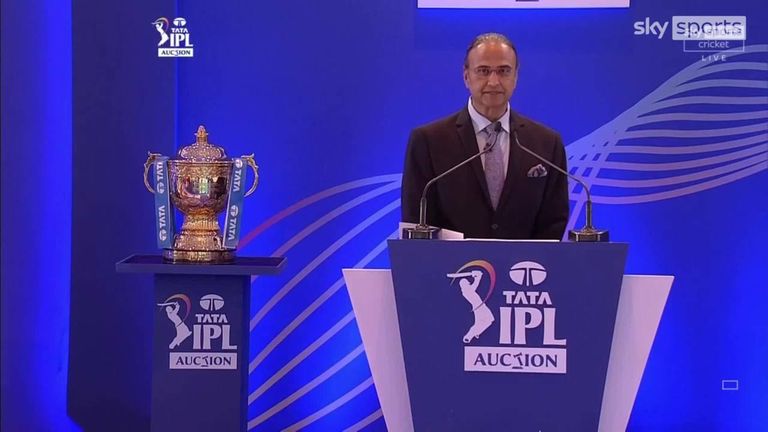 IPL auctioneer Hugh Edmeades has thanked fans for their support after his collapse on stage caused the Saturday 2022 auction to be temporarily suspended.

Edmeades collapsed midway through the first day of the auction on Saturday, with organizers later claiming he suffered from low blood pressure.

“I want to thank everyone around the world who sent me their best wishes,” Edmeades said in a video posted on the official IPL Twitter account. “I’m so sorry that I can’t be with you in person today.

“As you can see I’m doing great but I felt I wouldn’t be able to give a 100% performance which is unfair to BCCI, IPL, bidders and most importantly it would be unfair to the players.”

Edmeades, who was leading the IPL auction for a fourth straight season, was overseeing the bidding on the third batch of players when he suddenly collapsed from his position on the podium.

Edmeades’ collapse was confirmed by the IPL to be due to low blood pressure, but with the situation initially unclear, staff from the teams present watched in shock as the Briton was treated by Bengalaru medical staff.

The medical team took care of him immediately after the incident and he is stable. Mr. Charu Sharma will continue the bidding process today. pic.twitter.com/cQ6JbRjj1P

“IPL Auctioneer Mr Hugh Edmeades suffered an unfortunate fall due to postural hypotension at the IPL auction this afternoon,” the IPL said on Twitter .

“The medical team took care of him immediately after the incident and he is stable. Mr Charu Sharma will continue the bidding process today.”

The auction resumed after a break of just over an hour, with Sharma wishing Edmeades luck in the resumption.

We are happy to let everyone know that Hugh is stable and supported by the #IPL Medical team. Charu Sharma will replace him as auctioneer, as we take over the #IPLauche 💜

“Our hearts and wishes go out to Hugh Edmeades, who has been a bit ill,” Sharma said.

“From all accounts he is much better, he is stable and that is good news.”

England all-rounder Liam Livingstone became the highest-paid overseas player in the 2022 auction when the Punjab Kings spent £1.25million fending off offers from a number of competitors on day two of the auction. auction.

Chris Wood, who pulled out of last year’s auction to spend more time with his family, was snapped up for around £735,000 by Lucknow Super Giants on the first day of the auction.

Jonny Bairstow also got a big deal when the Kings committed over £650,000 for him, while fellow England player Jason Roy was snapped up by new franchise Gujarat Titans for nearly £200,000.

Not all news on the site expresses the point of view of the site, but we transmit this news automatically and translate it through programmatic technology on the site and not from a human editor.
Eleon2022-02-13
170
Facebook Twitter LinkedIn Pinterest WhatsApp