You probably don’t need to be an expert to figure out how the Penrith Panthers use Isaah Yeo. Watch them for five minutes and you’ll see him take a lot of first receiver passes.

It’s been pretty widely noticed because it’s been going on for quite some time and was a major contributor to their premiership victory last year and contributed no little to the Blues’ dominance at Origin as well.

Last year, the most important factor was not where he took the ball, it was where he ended up. His most effective use of football was with the long pass, which allowed him to free Viliame Kikau and Kurt Capewell wider on the pitch.

It was crucial to get a good ball to hit the front players and isolate them one on one, using the depth and length of the passes to move from the center out wide faster than the defenses could.

That was in 2021, however. In 2022, there’s another angle that hasn’t been talked about much. Yeo doesn’t just launch the Panthers’ attack: he directs it.

Where he once made his impact by swinging the point of attack, now he sets it, chooses the angle and counts the numbers.

The subtle difference between Yeo’s position caught my eye at the start of the Bulldogs game a few weeks ago. The main tracking TV camera angle at CommBank Stadium is directly next to the media box, so this image is almost exactly what I could see. Look where No. 13 Yeo is standing.

While last year he was often parked wider, allowing that long pass, the lock was deep behind ball play, choosing the direction of attack.

If you read my article last Friday on the numbers, it will not have escaped you that this is a vital role: usually running backs, or a single halfback, are constantly examining the numbers on either side pitch and make directional decisions based on how the defense is divided.

It seemed, from my perspective at least, that Yeo was now doing that behind the ruck. I put the same to Ivan Cleary in the presser after the match and once he understood the drift of the question, a wry smile immediately formed.

“I don’t know, what do you think? he joked. “I can’t give too much information, but it’s fair to say that Nat and Yeoey understand each other very well and can talk to each other.

“I think there was a try tonight, I think Marto’s (Liam Martin) one where he does Nathan’s job. The more you play the more teams are going to break you down, so we try to mix things up .

Nathan himself quipped, “Having Yeoey there is like having another halfback and we’re constantly checking what we want to do.

“It’s up to us to release the rest of the team. He’s a monster of a gamer, and for someone who puts in so much work, constantly thinking about a few games ahead certainly makes my job a little easier.

I stuck to Jarome Luai and asked him where Yeo got into his team’s game plan.

“He’s got the IQ, and he knows if we need the ball on our side he’ll call it,” said the five-eighth. “He’s another ball player in our team and that adds another dimension.

“It’s a different role for him to play with Nathan and for me to do what I do. We scored one here (for Taylan May) from there. 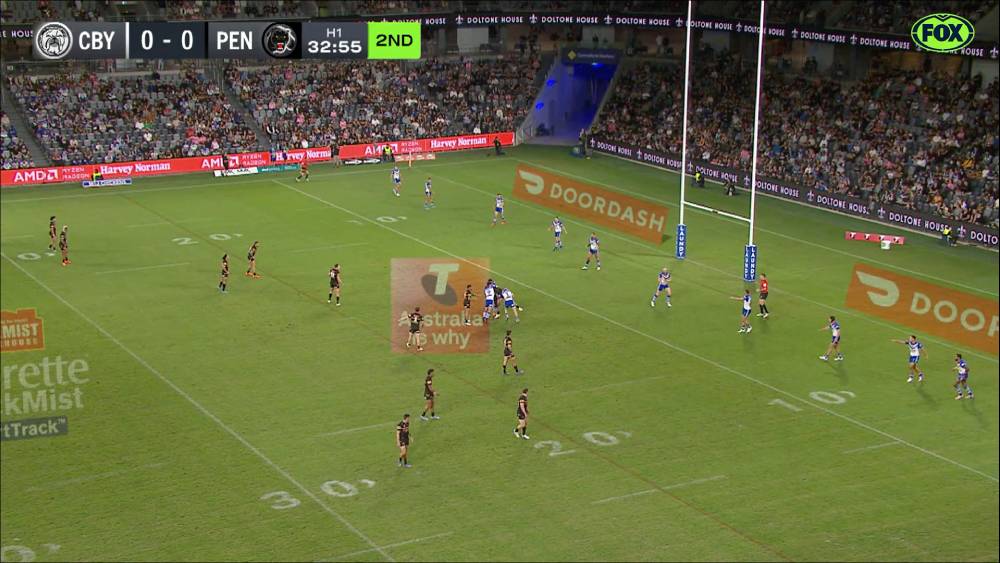 It’s worth delving into the tries mentioned by Ivan Cleary and Luai, which were those of Taylan May in the first half and Liam Martin in the second.

First, the Taylan can try. For the left edge play that sees Luai catch Brent Naden with a long pass, Yeo calls the numbers, picks the play, then gets the ball where it needs to be.

Anyway, he’s doing what Nathan Cleary usually does: except the defense isn’t waiting for Cleary, because it’s Isaah Yeo, not to mention they have to report to Cleary somewhere else.

It’s the kind of move you might be shy of if you were Ivan Cleary. 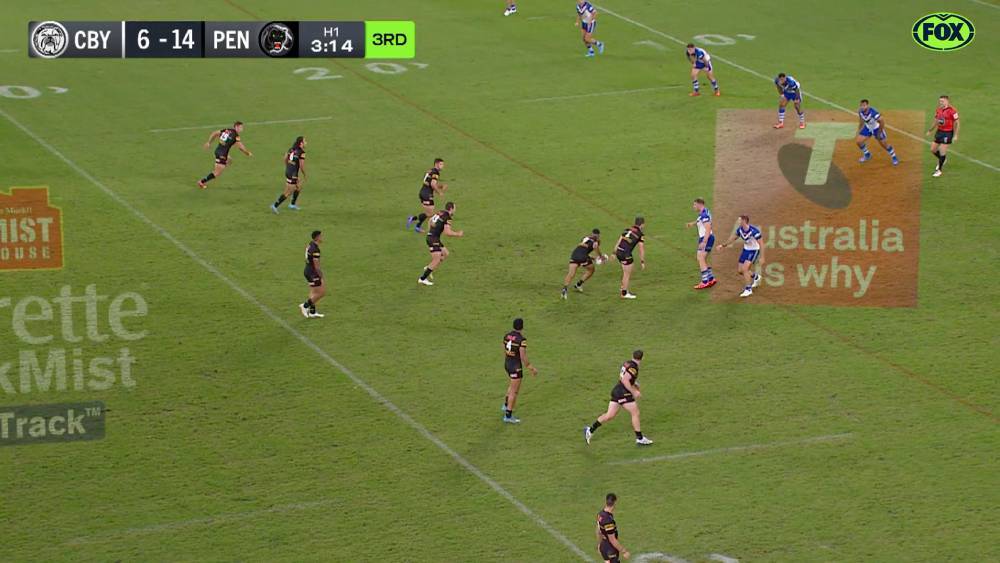 On Martin’s essay, the orchestration is even more evident. In game three, Yeo is directly behind the ball game and sends the game to the left, and even if he does not touch the ball once, he is the one who calls the shots to Api Koroisau at half-field.

Then, on his return, Yeo is the third receiver and collects the silver ball from the halves to send Martin into a huge hole. He goes from orchestrator to executioner.

It’s not that it’s a radical new idea. In fact, it’s quite old. We haven’t seen much of him here – probably not since Daniel Wagon in the early 2000s – but in the UK the torch of the cowardly playmaker has continued to burn.

Paul Sculthorpe, for example, has made a career of having the playing authority and touch ability of a halfback, while running in a 1.90m frame, over 100 kilos and a 13 on the back. He retired in 2008.

Kevin Sinfield did too, but almost never after 2011 when he moved from full-time to playing half-time. Since then, nothing.

As far as people think there is a return of the ballgame lockdown, that’s not really the case, as only five teams actually do it and only two use their 13 as a playmaker.

Those two are Penrith and Souths, and it’s no coincidence that Cam Murray and Yeo are two of the most successful players in the NRL this season.

There are good reasons for both teams to use this system. The Souths have a rookie halfback in Lachlan Ilias, so Murray is on hand to help steer the ship because their senior half (by age), Cody Walker, is less effective when it comes to organizing.

At Penrith, Nathan Cleary is obviously the senior half with Luai acting more as a runner, but when Cleary was injured Yeo came in and took over part of the slack. Now they share the tasks because it works so well.

The stat that confirms the trend is GPP, or General Game Passing, which as you might expect is dominated by halves. When it comes to attackers, you’d think the locks would be on top, but in truth, only five are. (Note: GPP does not include fictional half passes, so prostitutes tend not to be popular.)

There’s Yeo, Jake Trbojevic, Victor Radley and Murray between 20 and 15 average GPP and then a huge gap up to Josh Curran, Pat Carrigan and Josh Jackson on 8 which is a level similar to any other type of striker .

There’s also Kurt Mann, at 18, but he’s a fullback and I don’t know if the Knights think he’s a lock in their system or not, regardless of the number on his sweater.

Beyond the Knights, it will not have failed that the teams that use a ball game lock are quite strongly correlated with the best teams in the competition.

There is a causality/correlation issue here. It’s hard to say if teams that use the lock as a point guard fare well or if the better teams have better positioning talent that allows them to use a ball game lock.

Of the other teams that I think are trying to use a system like Penrith’s, the most notable are the Bulldogs – unsurprisingly, given that Trent Barrett was their ‘offensive guru’ a few years ago – but it seems certainly much worse as a tactic when Josh Jackson tries to play the role.

The outlier among good teams is Parramatta, which uses Junior Paulo and Nathan Brown (also 8 GPP, but 16 combined) as forwards. You can read a full dissection of this from Oscar Pannifex on Rugby League Writers, so I won’t go into detail here.

As Yeo demonstrates, there is a big difference between having a lock that can play the ball and a lock that makes play. Jake Trbojevic, the only non-halfback to touch the ball more frequently than Yeo, is a good contrast to show it.

Jake has the same number of possessions per game (both average around 28) but often acts like a dish, moving the ball horizontally. Yeo averages more runs, more yards per run, more tackle breaks, more line-ups and more tackle breaks.

Simply using an eye test, Jake slows down Manly while Yeo speeds up Penrith’s attack. One exists as a ball-mover, the other is a true pivot. By the way, that’s no knock on Jurbo: Manly has Daly Cherry-Evans and Kieran Foran, two old-school halves, and Jake does exactly what he’s supposed to do in their setup.

What this tactic allows Penrith to do – and what is so particularly different from what Yeo did last year – is to split the wider halves when needed and dramatically increase their ball quality.

This in turn means that when it comes to running the crucial game, they have more time and better options. Yeo is perfect for this, as he floats in the middle of the field like any lock does, but can dash to either side of the play to become a first receiver and launch attacks.

Last year, Nathan Cleary often played on both sides of the pitch, but now Yeo is playing that role as well. If you were trying to read the Panthers attack, it used to be a good idea to follow Nathan and try to stop him, but that no longer works.

If you notice what Yeo is doing – what Brisbane, to some extent, did on Friday night – then you open the door for Cleary to come in and do what he does.

It happened for the Panthers’ first down against the Broncos on Friday: Two men pulled the line to pressure where Cleary and Yeo were, leaving a hole that Luai ran through against the slide.

Or Scott Sorensen’s try: Yeo took the receiver’s first pass with the line accelerating on the outside, leaving space that the second rower backed up.

Come on, a third. For Liam Martin’s try, Yeo was able to show the touch skill necessary to make contact and then put Martin through the hole.

The back rower had to be responsible for Yeo, due to his size and running ability, but he also didn’t know if he would pass or run. Half didn’t know whether to jump or go.

It is no coincidence that the three tries were scored right next to the uprights, inside the tram lines but outside the poles. This is the most effective lane for a playmaker lock, as opposed to further out where a half might do their best to create tries for wingers and crosses.

Previously, teams always watched Cleary and based their defensive decisions on what he did. They all looked the wrong guy.