The drought in different productive areas of the country and the absence of rainfall forecasts in the short term continue to generate complications in the current agricultural season, especially in significant delays in the sowing tasks of soy Y corn. They are the two main contributors of foreign currency to the country. On the other hand, the harvest of wheatone of the most complicated crops due to the lack of rain and the late frosts.

The effect of the drought is worrisome. The Government projects a 40% drop in the wheat harvest, while the entry of trucks to the ports of Rosario is the lowest in the last 10 years. In addition, soybean and corn planting progress is the slowest in 22 years.

According to the weekly report released yesterday by the Department of Agricultural Estimates of the Buenos Aires Grain Exchangeso far 19.4% of the 16.7 million hectares of soy projected, representing a year-over-year lag of almost 20 percentage points. In addition, it was detailed that in the last week more than 1.2 million hectares were planted, with 65.2% of said area concentrated on both nuclei (North and South). But beyond being the areas with the largest planted area, they present a significant delay as a consequence of the water deficit and the low temperatures that were registered at the beginning of November.

To all this, the weekly survey determined that the main delays in planting are recorded in the Center-North of Santa Fe, North of La Pampa and West of Buenos Aires. In this regard, the technicians from the Buenos Aires Stock Exchange explained that the aforementioned regions “continue to report a greater intention to sow the oilseed that would occupy the lost area of ​​winter crops and early corn fields that were left out of the current productive cycle. However, the lack of surface moisture and the absence of a short-term rainfall forecast, which will allow the current scenario to be reversed, will continue to limit the progress of the seeders”. 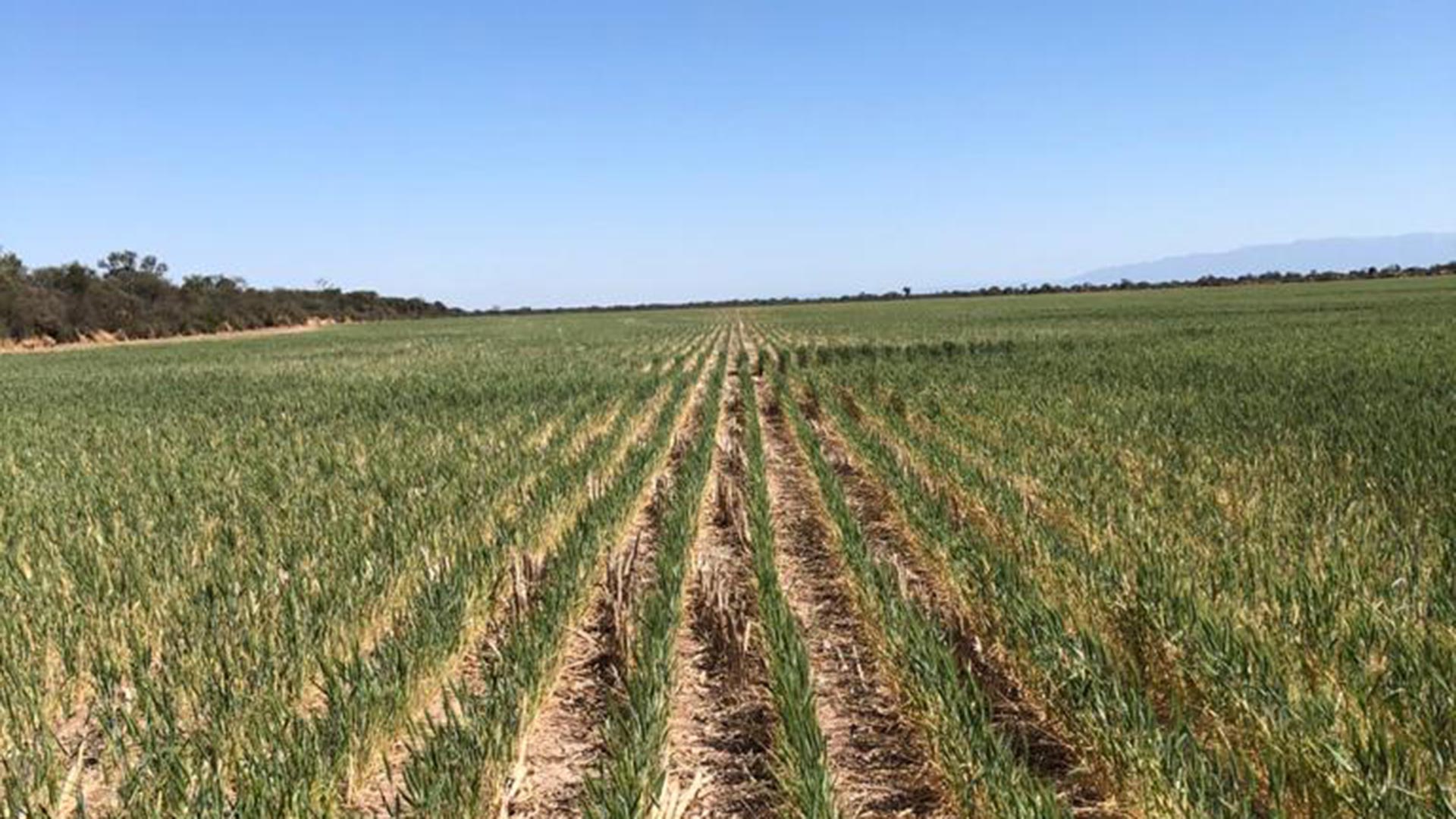 Lots of wheat complicated by lack of rain

On the other hand, planting corn Up to now, it has reached 23.8% of the 7.3 million hectares projected for the current campaign. After registering a week-to-week progress of 0.2%, there is a year-on-year delay at the national level of 6.2% in sowing tasks. It was also specified that the first cereal squares began to be surveyed in the east of the national agricultural area, where the specialists commented that despite the effects of frost and drought suffered by the lots in their growth stage, “the expectation of yield It is just below the regional averages.

The drought delayed the planting of corn and soybeans and Argentina could lose almost USD 5,000 million

In another sense, it was suggested that new rainfall in the west of the agricultural area they maintain the humidity in the first part of the profiles while the cereal expands leaves, and it is expected that, during the next week, the planting of late plantings will begin, which will represent more than 55 % of the total corn projected. In this regard, the report reflected that “towards the provinces of Cordova Y saint Louis, new rainfall improves the water supply for the sowing of the first late batches of the cereal. and about the zones Central-North Santa Fe Y Center-East of Entre Ríosrains are necessary to sustain the high water demand of the crop and of the atmosphere as a result of the high temperatures”.

Meanwhile in the core zone, one of the most important productive areas of the country, thanks to the rainfall of the last few days, soybean planting tasks advanced with outstanding progress of the tasks by the producers. This was pointed out by the Strategic Guide for Agriculture of the Rosario Stock Exchange.

Soybean and drought: although not even half of it has yet been planted in the main area of ​​the country, very significant losses are already projected

Only producers who achieve a yield of 45 quintals per hectare would have profits, in their own or rented fields, something improbable due to the scarcity of water

The entity’s specialists recalled that 30 kilos per hectare are lost per day due to the delay in planting soybeans on December 1st. “For this reason and because there is total uncertainty regarding the weather, the planters were working day and night,” they commented, noting that 1.2 million hectares of prime soybeans were planted in 7 days. So far, the aforementioned region has achieved 75% sowing progress, where a large part of the progress was in the south-central part of the province of Santa Fe.

“In 7 days, 1.2 million hectares of premium soybeans were planted in the Core Zone (Rosario Stock Exchange)

“First class soybeans are 90% planted. We have planted a lot, but if you ask me: in good condition? And I dont know. We were taking advantage of all those little rains of 10 to 15 mm. It rains a few millimeters and people are encouraged to sow. There is everything, good, regular and dry crops. It is necessary to evaluate in a few days what will be able to be born from these batches and how they will continue. The situation is very difficult in the area,” explained the engineers from the district of Colon, that report to the Rosario entity.

While the planting of the summer crops faces climatic complications, the wheat harvest advances. It is one of the main crops affected by the lack of rain and late frosts. In fact, in the core region and with a harvest that has already reached 20% of the planted area in that area of ​​the country, it is beginning to be confirmed that it will be the lowest yield in the last 10 years. According to the Rosario Stock Exchange, 180,000 hectares of the cereal have already been harvested, which yields an average yield of 15 quintals per hectare, and which are 40% below the historical average of the last 10 campaigns.

At the national level, according to the weekly report of the Grain Exchange of Buenos Aires, the cereal harvest has already covered 12.5% ​​of the planted area, representing an interweekly progress of 2.5%, and with an average national yield. of 13.5 quintals per hectare. In the North of the country The harvest tasks are about to end, and those early plantings located in the center of the agricultural area begin with the harvest, reaching so far “heterogeneous yields and below the averages of the last five campaigns.”

In terms of estimates of total wheat production, the Buenos Aires Grain Exchange maintains it at 12.4 million tons. In case it is confirmed. it would represent a drop of 10.6 million tons compared to the previous campaign, and would lead to a complex situation to supply both the internal and external markets.

Massa: “Those who desperately ask for devaluation destroy the value of their companies, not just the income of Argentines”
“Reactinflation”: the term used by Melconian to describe the delicate situation and warn of a higher price rise in 2023
What the spokesperson for the Presidency said about the year-end bonus for workers in a dependency relationship
What will happen to the reserves during the summer: the market expects more import restrictions

Not all news on the site expresses the point of view of the site, but we transmit this news automatically and translate it through programmatic technology on the site and not from a human editor.
Sara Adm3 days ago
Facebook Twitter LinkedIn Pinterest WhatsApp

All drones over Sevastopol “shot down” – Crimean authorities from Moscow