In response to the increased influx of migrants to the Florida coast, Governor Ron DeSantis ordered the deployment of the state National Guard. The governor ordered the mobilization of soldiers, airmen, equipment and aircraft to assist federal agencies.

The state of Florida is seeing a massive spike in migrants heading by sea to the coast, as Breitbart Texas reported on Thursday. Breitbart contacted Governor DeSantis’ office on Friday morning for a response to the outbreak as more than 4,400 migrants have headed to Florida’s shores since August – including more than 1,400 over New Year’s weekend.

We’re here as the US Coast Guard moves 330+ #migrants from Dry Tortugas to Key West. Multiple landings around the New Year led to an unprecedented park closure #exclusive @WPLGLocal10 pic.twitter.com/hCl3vmoqJI

“As the negative impacts of Biden’s lawless immigration policies continue unabated, the burden of the Biden administration’s failure falls on local law enforcement who lack the resources to deal with the crisis,” DeSantis said in a written statement. “That’s why I’m activating the National Guard and directing state resources to help ease the strain on local resources. When Biden continues to ignore his legal responsibilities, we will step in to support our communities.”

DeSantis pointed to the impact on Monroe County where the sheriff’s office has just 194 deputies. He said it is particularly taxing for the sheriff “to dedicate the resources necessary to manage the movement of hundreds of migrants while ensuring adequate public safety.”

DeSantis commands planes and helicopters from the Florida National Guard and moves additional resources from the state’s Fish and Wildlife Conservation Commission Marine Patrol to “support water bans and ensure the safety of migrants attempting to ‘reaching Florida through the Florida Straits’. 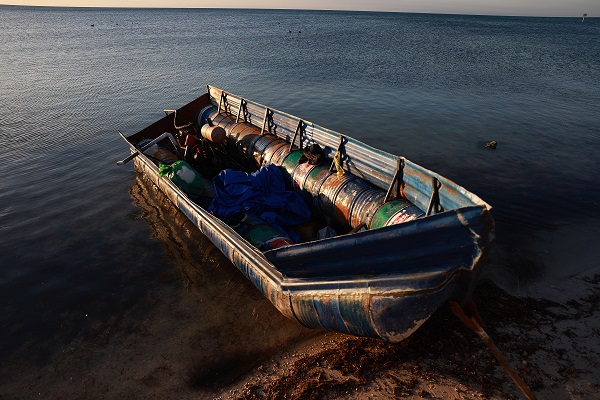 Law enforcement partners assigned to the Homeland Security Task Force – Southeast spent New Year’s weekend apprehending nearly 1,400 migrants at sea and along islands and coastal areas of the Florida Keys, according to a tweet from the agency. Many of these smuggling interdictions took place on heavily overloaded boats.

The task force reports that 364 migrants were apprehended in a single incident in Dry Tortugas National Park. By the end of the incident, the number had risen to 427 migrants removed from the island by the US Coast Guard.

#Latest news @USCGSoutheast reports that all remaining migrants on @DryTortugasNPSa #updated total of 337 migrants (not counting the 90 migrants previously removed by @USCG), have been removed from the island and are on board a @USCG cutter for transfer to Key West tomorrow. pic.twitter.com/2t8c0Mu4XU

In the first two months of the new fiscal year 23, officers in the Miami area apprehended 2,048 migrants. That’s more than half of the total number of arrests for all of fiscal year 22 when officers detained 4,009 migrants, according to the National Encounters report from U.S. Customs and Border Protection.

In the first two months of the previous year, officers apprehended only 336 migrants compared to 2,048 in the same period this year, an increase of 510% in this sector alone. From the tweets above, it looks like the official numbers for December will far exceed those apprehended in November (1,122).

Between August and November 2022, officers in the Miami area apprehended 3,558 migrants. In all of Exercises 20 and 21 combined, these officers apprehended only 2,333 migrants.

Bob Price is associate editor and main contributor for the Breitbart Texas-Border team. He is an original member of the Breitbart Texas team. Price is a regular panelist on Fox 26 Houston’s What are you getting at? Sunday morning talk show. Follow him on Twitter @BobPriceBBTX.

Not all news on the site expresses the point of view of the site, but we transmit this news automatically and translate it through programmatic technology on the site and not from a human editor.
William3 weeks ago
265
Facebook Twitter LinkedIn Pinterest WhatsApp