Millions of mask-wearing students returned to Philippine primary and secondary schools for their first in-person classes on Monday after a two-year coronavirus lockdown that is feared has worsened alarming rates of illiteracy among children.

Officials grappled with daunting problems — including a shortage of classrooms, lingering fears of COVID-19, an approaching storm and earthquake-damaged school buildings in the north of the country — to welcome nearly 28 million students who signed up for the school year.

In a primary school in the city of San Juan, in the capital region, teachers checked the temperature of the students and sprayed their hands with alcohol before letting them enter the classroom. 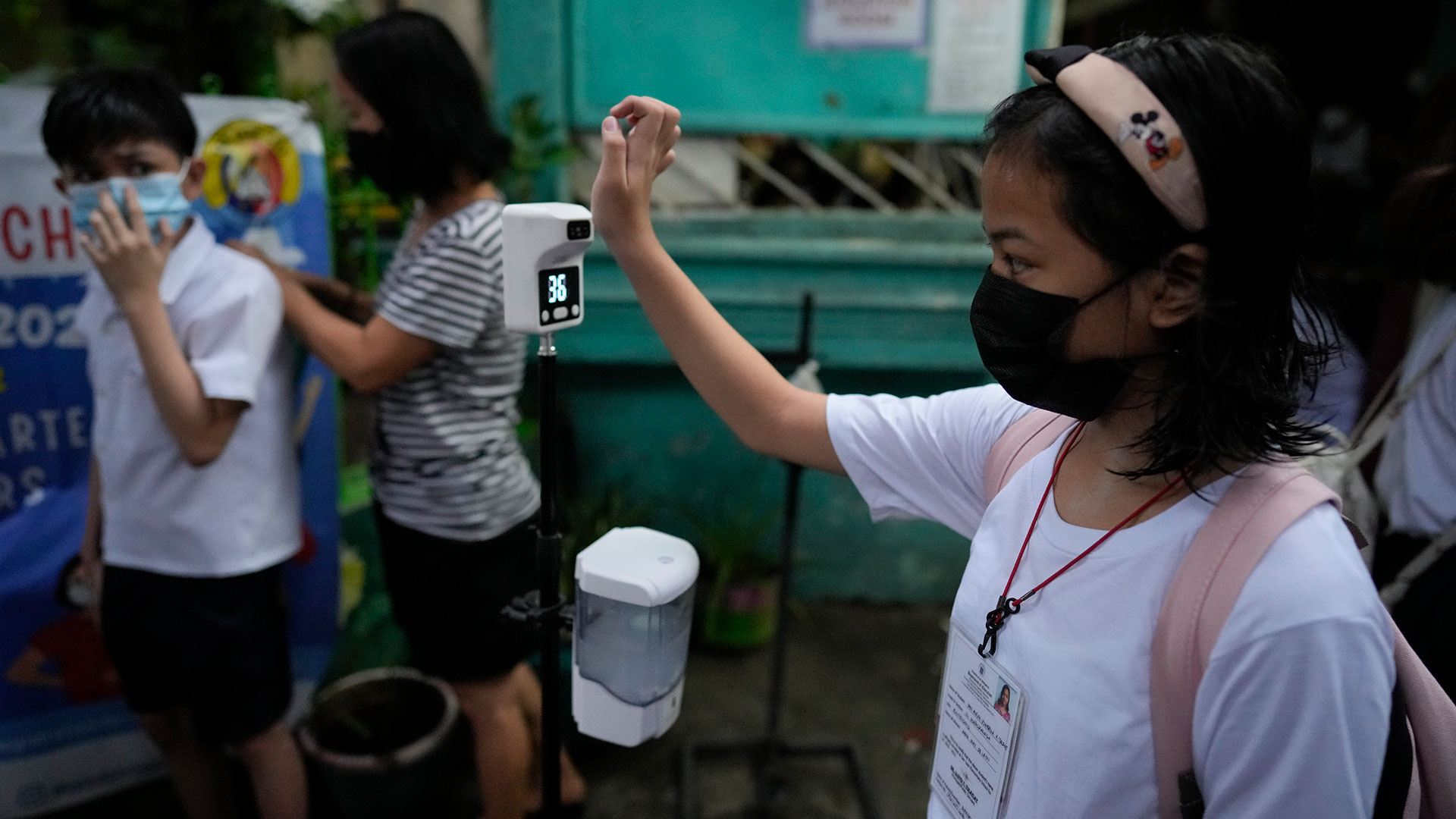 Millions of students wearing face masks returned to Philippine primary and secondary schools on Monday for their first in-person classes after two years of coronavirus lockdowns that are feared have worsened one of the world’s most alarming child illiteracy rates. (AP)

Renaline Pemapelis, 27, excitedly gave last-minute instructions to her son, who was going to school for the first time. “I have mixed feelings, worried and excited”he told The Associated Press.

Only about 24,000 of the nation’s public schools, or about 46%, were able to start in-person classes five times a week starting Monday, while the rest will turn to a mix of in-person and online classes through Nov. 2, when all public and private schools are required to bring all students back to the classroomeducation officials said.

But about 1,000 schools will not be able to fully switch to in-person classes during the transition period for various reasons, including damage to the school building from a strong earthquake last month in the north, officials said. 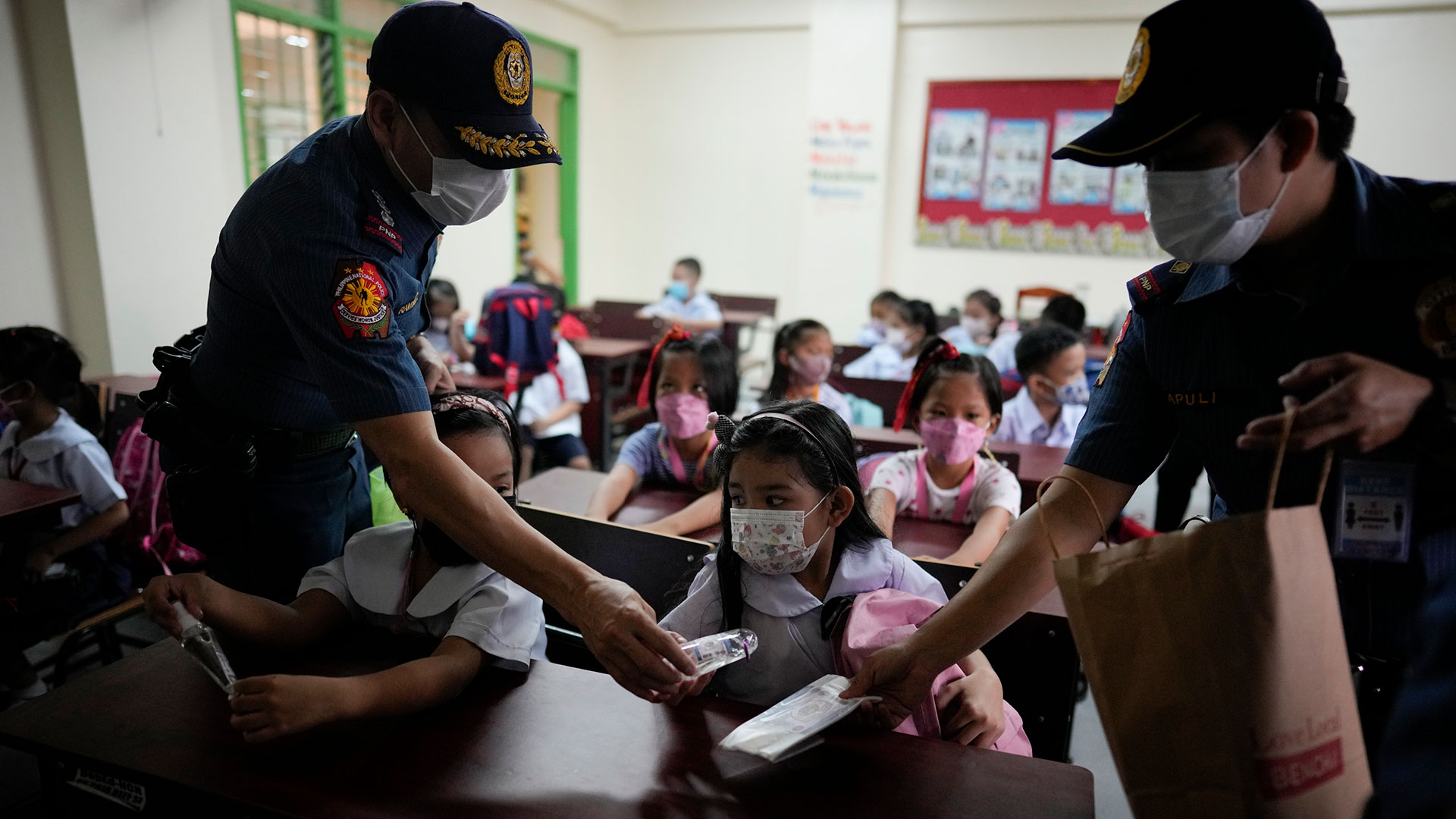 The Education Department said some schools will have to split classes up to three shifts a day due to classroom shortages, a long-standing problem, and to avoid overcrowding that could turn schools into new centers of coronavirus outbreaks.

“We always say that our goal is a maximum of two shifts only, but there will be areas that will have to go to three shifts because they are so overcrowded,” Department of Education spokesman Michael Poa said Friday. Despite many concerns, education officials said “all systems are working” for classes to resume Monday, he said.

However, Senator Joel Villanueva said such guarantees must be accompanied by real improvements on the ground. 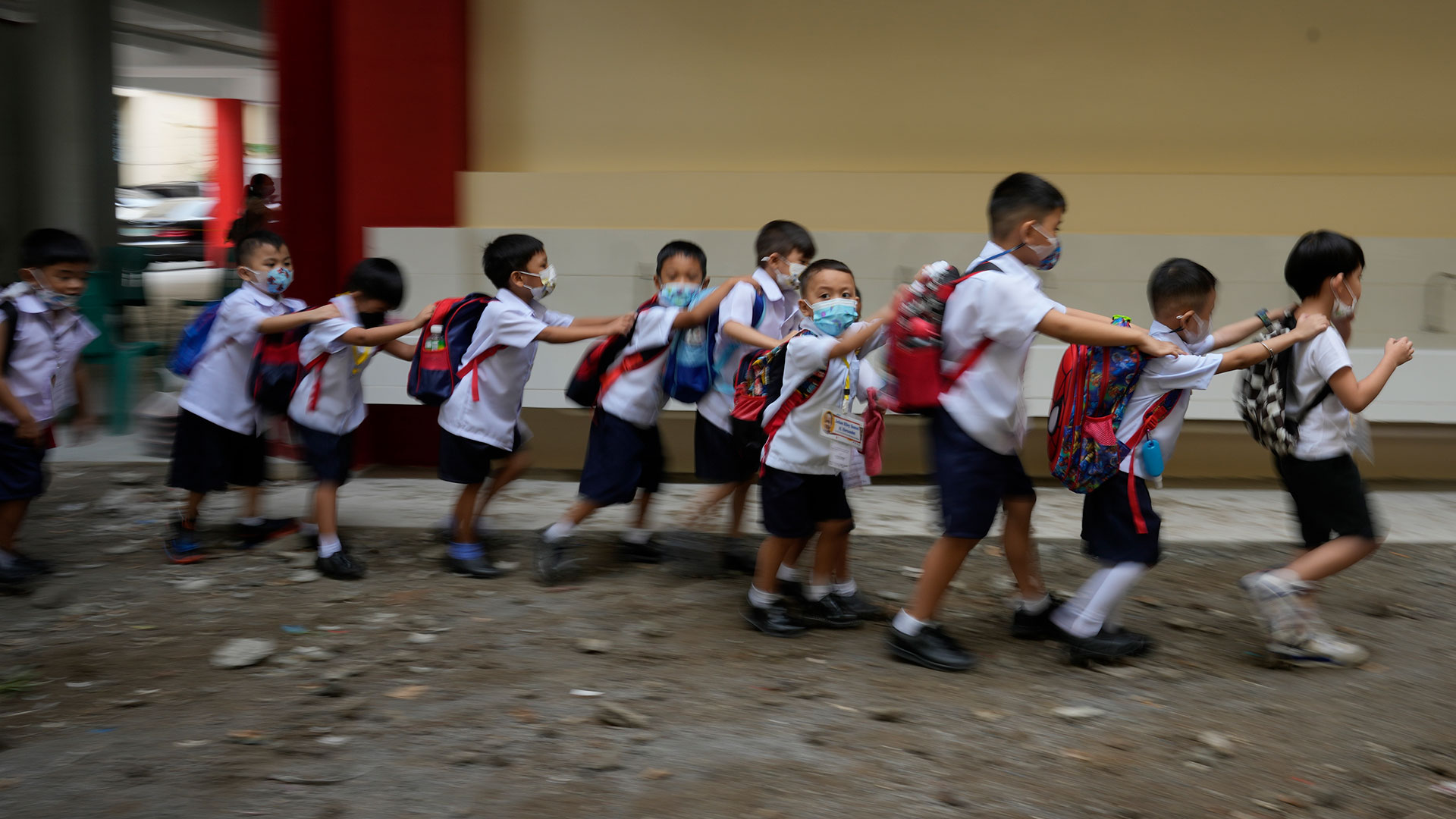 “The era of missing classrooms, sharing tables and chairs and teaching under the shade of trees should no longer happen”said Villanueva, who has introduced two bills that require additional medical, transportation and grocery subsidies for public school teachers.

Among the hardest hit by the pandemic in Southeast Asia, the Philippines, under then-President Rodrigo Duterte, imposed one of the world’s longest coronavirus lockdowns and school closures. Duterte, whose six-year term expires on June 30, has rejected calls for the resumption of face-to-face classes out of concern it could spark new outbreaks.

The prolonged closure of schools raised fears that literacy rates among Filipino children, already at alarming levels before the pandemic, could worsen. 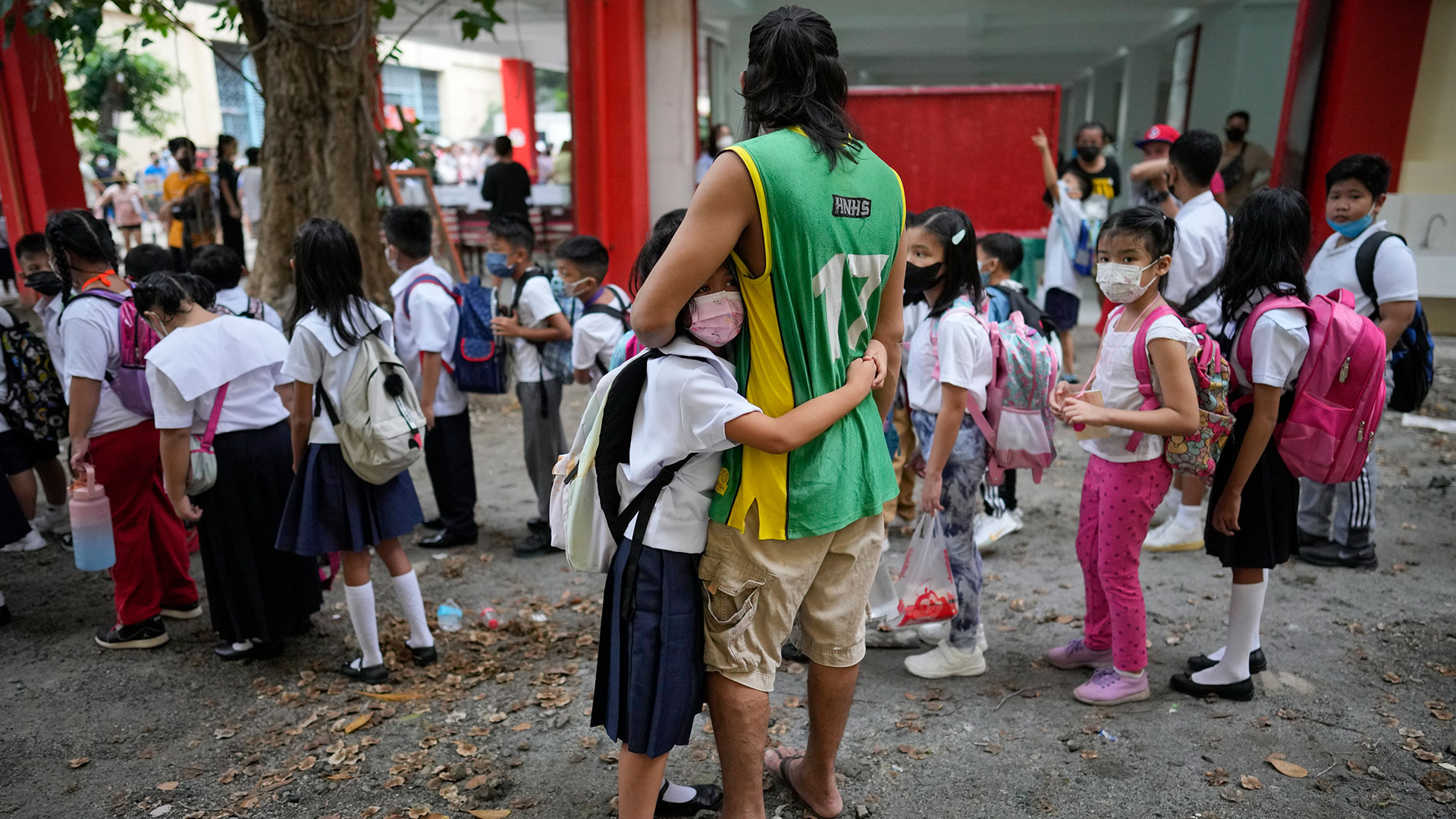 A World Bank study last year showed that around nine out of 10 children in the Philippines suffered from “learning poverty”, or the inability of 10-year-olds to read and understand a simple story.

“Prolonged school closures, poor health risk mitigation and shocks in household income had the greatest impact on learning poverty, leaving many children in the Philippines unable to read or understand text. simple at age 10,” UNICEF Philippines said in a statement. 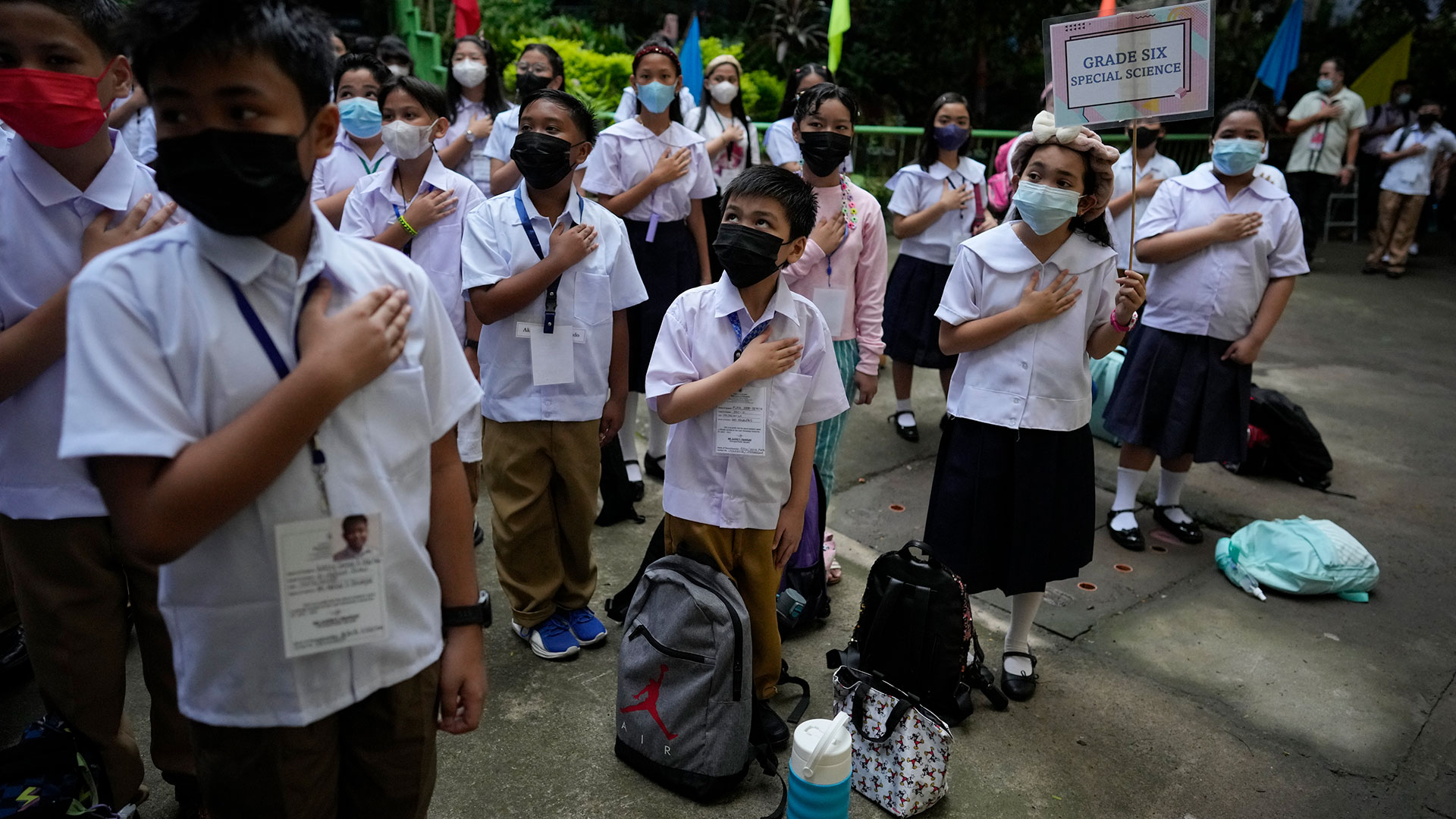 The Education Department said some schools will have to split classes up to three shifts a day due to classroom shortages, a long-standing problem, and to avoid overcrowding that could turn schools into new centers of coronavirus outbreaks. (AP)

Poa said 325 temporary learning spaces were being built in the northern province of Abra and outlying regions to replace school buildings hit by the July 27 earthquake.

Education officials also scrambled to help more than 28,000 students find new schools after at least 425 private schools closed permanently after the pandemic hit in 2020, mostly due to financial losses. About 10,000 of the students have enrolled in public schoolsPoah said.

Poverty has also been a key obstacle to education. Crowds stormed the offices of the Department of Social Welfare and Development on Saturday to claim financial aid for indigent students, resulting in the injuries of at least 26 people who were trapped in the entrance doors.

(with information from AP)

More than 800 aftershocks were recorded from the strong earthquake that left five dead and at least 150 injured in the Philippines
Fidel Ramos died, the key man in the overthrow of Philippine dictator Ferdinand Marcos in 1986

Not all news on the site expresses the point of view of the site, but we transmit this news automatically and translate it through programmatic technology on the site and not from a human editor.
Sara AdmAugust 22, 2022
Facebook Twitter LinkedIn Pinterest WhatsApp

Post-COVID employment prospects Why can’t the country get out of informality?