West Ham face a fearsome Europa League Round of 16 as they take on record-breaking six-time winners Sevilla.

The Andalusian club, who won the competition three times in a row between 2014 and 2016, are one of only two teams alongside Real Madrid to have retained their title.

The Hammers reached the knockout stages of the Europa League for the first time while Sevilla have won the tournament in four of their last five appearances.

West Ham were one of the top seeds in Friday’s draw after being among the sides to finish top of their Europa League groups, meaning they will play the second leg of their Round of 16. home final.

This means they travel to the Ramon Sanchez-Pizjuan stadium for the first leg on March 10 to take on Julen Lopetegui’s side, where this year’s final will take place in May.

The second leg will take place in London on March 17. Sevilla won their knockout tie against Dinamo Zagreb with a 3-2 aggregate victory, despite losing 1-0 in Croatia on Thursday night.

Rangers will face Serbian champions Red Star Belgrade in the Europa League Round of 16, with the first leg taking place at Ibrox.

Giovanni van Bronckhorst’s side managed a 2-2 draw at home to Borussia Dortmund in front of a boisterous Ibrox crowd to progress 6-4 on aggregate.

Red Star Belgrade was seeded after finishing top of Group F ahead of Braga, Midtjylland and Ludogorets. They are currently in second place in the Serbian SuperLiga. 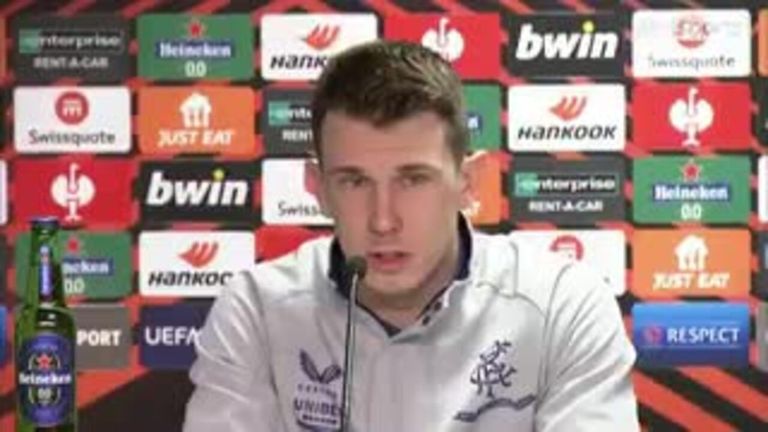 Ryan Jack reflects on Rangers’ win over Borussia Dortmund as the Ibrox side progress to the Europa League Round of 16.

Barca kicked into high gear to beat Napoli 4-2 away on Thursday and progress to the Europa League last 16 5-3 on aggregate.

Meanwhile, Porto and Betis will play their first legs at home on March 9 to avoid a clash with Braga and Sevilla respectively.

Spartak Moscow will face RB Leipzig, with the Russian club playing their home game at a neutral venue, according to a decision by European football governing body UEFA on Friday.

Full Europa League round of 16 draw

When are the quarter-finals?

The first legs of the round of 16 will be played on March 10, with the return matches a week later on March 17.

What are the key dates for the Europa League?

All dates are provisional and subject to change by UEFA.

Leicester will face Ligue 1 club Rennes in the Europa Conference League Round of 16.

The Foxes, who failed to progress from the Europa League group stage, finished the job away from Danish side Randers to reach the last 16 of the Europa Conference League, winning the game on Thursday comeback from the knockout stage playoffs 3-1 to complete a 7-2 aggregate win.

Rennes finished top of Europa League Group G, ahead of Vitesse, Tottenham and NS Mura to be seeded for Friday’s draw.

The French side drew 2-2 with Tottenham at home before securing a 3-0 win for the away game due to numerous positive Covid-19 tests in the Spurs squad.

The first leg will be played on March 10 at the King Power Stadium, with the return to France a week later. The inaugural final of the competition will take place in Tirana, Albania on May 25.

Jose Mourinho’s Roma will face fellow conquerors Tottenham Vitesse in the Netherlands in the first leg of their round of 16 while PSV Eindhoven take on Copenhagen.

PSV beat Maccabi Tel Aviv 2-1 on aggregate to earn a 1-1 draw in Israel, although the game was in danger of being abandoned early in the second half after objects were thrown onto the pitch.

Norway’s Bodo/Glimt side beat Celtic 2-0 to earn a 5-1 aggregate victory over the Scottish Premiership leaders, and their reward for reaching the last 16 is to face AZ Alkmaar.

Elsewhere, Marseille will take on Basel of Switzerland. The Ligue 1 club won 3-0 at Qarabag to progress 6-1 on aggregate from the knockout stage.

When are the quarter-finals?

The first legs of the round of 16 will be played on March 10, with the return matches a week later on March 17.

What are the key dates for the Europa Conference League?

Not all news on the site expresses the point of view of the site, but we transmit this news automatically and translate it through programmatic technology on the site and not from a human editor.
Eleon2022-02-25
Facebook Twitter LinkedIn Pinterest WhatsApp

The main tactical trends of the NRL of 2022